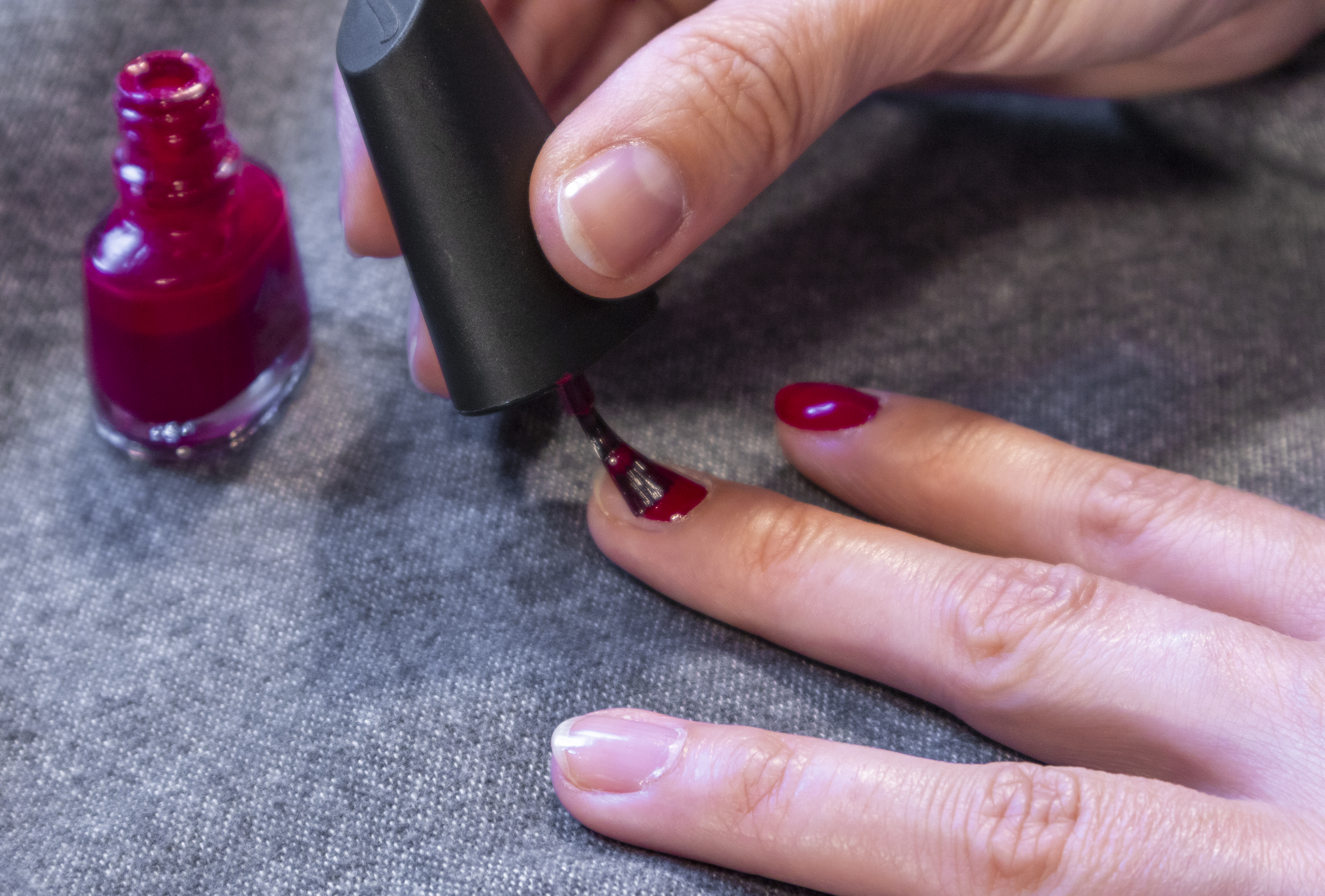 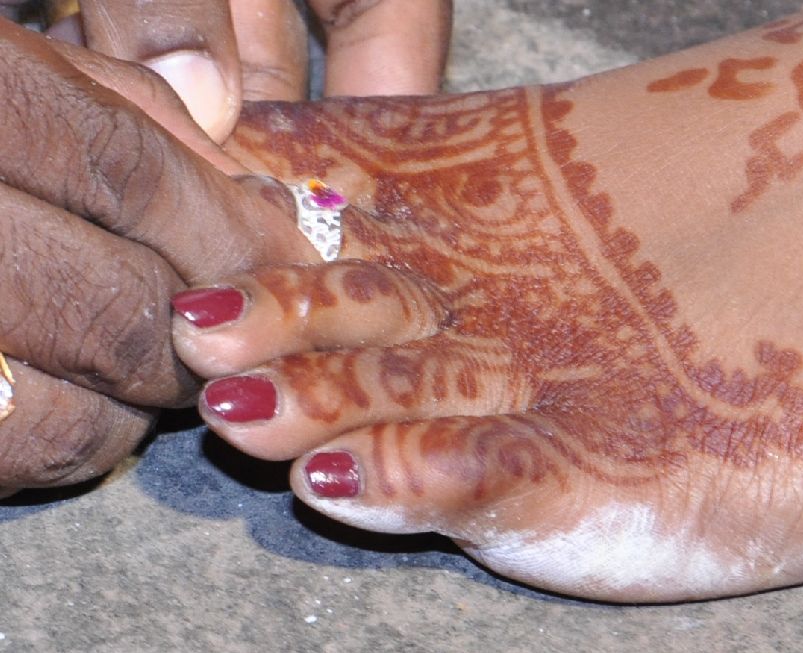 Nail polish (also known as nail varnish or nail enamel) is a lacquer that can be applied to the human Nail (anatomy), fingernail or toenails to decorate and protect the nail plates. The formula has been revised repeatedly to enhance its decorative effects and to suppress cracking or peeling. Nail polish consists of a mix of an organic polymer and several other components that give it its unique color and Surface texture, texture. Nail polishes come in all shades of color and play a significant part in manicures or pedicures.

Nail polish originated in China and dates back to 3000 BC. Around 600 BC, during the Zhou dynasty, the royal house preferred the colors gold and silver. However, red and black eventually replaced these metallic colors as royal favorites. During the Ming dynasty, nail polish was often made from a mixture that included beeswax, egg whites, gelatin, vegetable dyes, and gum arabic. In Egypt, the lower classes wore pale colors, whereas high society painted their nails reddish brown, with henna. Mummified pharaohs also had their nails painted with henna. Colored nail polish did not make an appearance until the 1920s. Early nail polish formulas were created using basic ingredients such as lavender oil, carmine, oxide tin, and Bergamot essential oil, bergamot oil. It was more common to polish nails with tinted powders and creams, finishing off by buffing the nail until left shiny. One type of polishing product sold around this time was Graf's Hyglo nail polish paste.

* Nail polish consists of a film-forming polymer dissolved in a volatile organic solvent. Typical is a solution of nitrocellulose in butyl acetate or ethyl acetate is common. This basic formulation is expanded to include the following: :*Plasticizers to yield non-brittle films. Dibutylphthalate and camphor are typical plasticizers. :*Dyes and pigments. Representative compounds include chromium oxide greens, chromium hydroxide, Prussian blue, ferric ferrocyanide, stannic oxide, titanium dioxide, iron oxide, carmine, ultramarine, and manganese violet. :*Opalescent pigments. The glittery/shimmer look in the color can be conferred by mica, bismuth oxychloride, natural pearls, and aluminum powder. :*Adhesive polymers ensure that the nitrocellulose adheres to the nail's surface. One modifier used is tosylamide-formaldehyde resin. :*Thickening agents are added to maintain the sparkling particles in suspension while in the bottle. A typical thickener is stearalkonium hectorite. Thickening agents exhibit thixotropy, their solutions are viscous when still but free-flowing when agitated. This duality is convenient for easily applying the freshly shaken mixture to give a film that quickly rigidifies. :*Ultraviolet stabilizers resist color changes when the dry film is exposed to sunlight. A typical stabilizer is benzophenone-n, benzophenone-1.

This type of nail polish is a clear, milky-colored, or opaque pink polish formula that is used specifically before applying nail polish to the nail. Its purpose is to strengthen nails, restore moisture to the nail, and help polish adhere to the nail. It prevents staining and extends the lifespan of the manicure. Some base coats are marketed as "ridge fillers", and can create a smooth surface, de-emphasizing the ridges that can appear on unbuffed nails. Some base coats, called "peel off base coats", allow the user to peel off their nail polish without using a remover.

This type of nail polish is a clear colored polish formula that is used specifically after applying nail polish to the nail. It forms a hardened barrier for the nail that can prevent chipping, scratching and peeling. Many topcoats are marketed as "quick-drying." Topcoats can help the underlying colored polish dry quickly as well. It gives the polish a more finished and desired look and may help to keep the polish on longer. 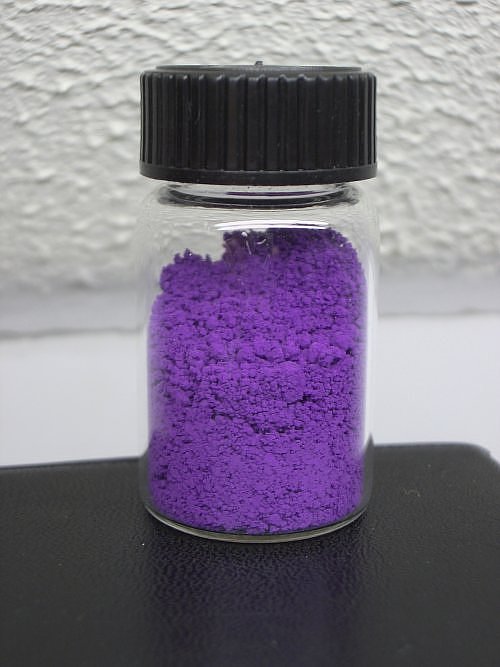 Gel polish is a long-lasting variety of nail polish made up of a type of methacrylate polymer. It is painted on the nail similar to traditional nail polish, but does not dry. Instead it is UV curing, cured under an ultraviolet lamp or ultraviolet LED. While regular nail polish formulas typically last two to seven days without chipping, gel polish can last as long as two weeks with proper application and home care. Gel polish can be more difficult to remove than regular nail polish. It is usually removed by soaking the nails in pure acetone (the solvent used in most nail polish removers) for five to fifteen minutes, depending on the formula.

Paint sheen, Matte polish is like regular polish, but has a purposely dull finish rather than a shine. It can be purchased as a regular base coat in ranges of different colors. Matte nail polish can also be found in a topcoat. Matte topcoat is most useful for painting over any dry base color, giving it a different appearance. The matte topcoat polish will dull the shine from a regular base coat polish. Matte polish has become very popular through the years, particularly since it can be used in nail art applications, where designs can be created on the nail using the contrast of both shiny and matte surfaces.

Traditionally, nail polish started in clear, white, red, pink, purple, and black. Nail polish can be found in a diverse variety of colors and shades. Beyond solid colors, nail polish has also developed an array of other designs, such as crackled, glitter, flake, speckled, iridescent, and holographic. Rhinestones or other decorative art are also often applied to nail polish. Some polish is advertised to induce nail growth, make nails stronger, prevent nails from breaking, cracking, or splitting, and even to stop nail biting.

French manicures are designed to resemble natural nails, and are characterized by natural pink base nails with white tips. French manicures were one of the first popular and well-known color schemes. French manicures may have originated in the eighteenth-century in Paris but were most popular in the 1920s and 1930s. However, the traditional French manicures were much different from what we know today. They were generally red, while leaving a round crescent shape at the area near the cuticle blank to enhance the lunula of the nail, known now as a half-moon manicure. With the modern French manicure, trends involving painting different colors for the tips of the nails instead of the white. French tip nails can be made with stickers and stencils. It is still typically done by hand through painting with polish or gel, or sculptured with acrylic.

Social media has given rise to a nail art culture that allows users to share pictures of their nail art. ''Women's Wear Daily'' reports nail polish sales hit a record US$768 million in the United States in 2012, a 32% gain over 2011. Several new polishes and related products came on to the market in the second decade of the twenty-first century as part of the explosion of nail art, such as nail stickers (either made of nail polish or plastic), stencils, magnetic nail polish, nail pens, glitter and sequin topcoats, nail caviar (micro beads), nail polish marketed for men, scented nail polish, and color changing nail polish (some which change hue when exposed to sunshine, and ranges which change hue in response to heat).

Nail polish in the Western world was more frequently worn by women, going in and out of acceptability depending upon moral customs of the day. In Victorian era culture it was generally considered improper for women to adorn themselves with either makeup or nail coloring, since natural appearances were considered more chaste and pure. In the 1920s, however, women began to wear color in new makeups and nail products, partly in rebellion to such prim customs of their recent past. Since the 1920s, nail colors progressed from French manicures and standard reds to various palettes of color choices, usually coordinated with the fashion industry's clothing colors for the season. By the 1940s the whole nail was painted; before that, it was fashionable to leave the tips and a half-moon on the nail bed bare. It is less common for men to wear nail polish, and the usage can be seen as violating traditional gender norms. Uses include clear polish to protect nails from breakage or impart a well-groomed sheen, and colored polish on fingernails and toenails. Professional baseball players, especially catchers, may wear nail polish on the field.

Nail polish remover is an Organic compound, organic solvent that may also include oils, scents, and coloring. Nail polish remover packages may include individual felt pads soaked in remover, a bottle of liquid remover used with a cotton ball or cotton pad, or a container filled with foam into which one inserts a finger and twists it until the polish comes off. Choosing a type of remover is determined by the user's preference, and often the price or quality of the remover. The most common remover is acetone. Acetone can also remove artificial nails made of Acrylic resin, acrylic or cured gel nails, gel. An alternative nail polish remover is ethyl acetate, which often also contains isopropyl alcohol. Ethyl acetate is usually the original solvent for nail polish itself. Acetonitrile has been used as a nail polish remover, but it is more toxic than the aforementioned options. It has been banned in the European Economic Area for use in cosmetics since 17 March 2000.

The health risks associated with nail polish are disputed. According to the U.S. Department of Health and Human Services, "The amount of chemicals used in animal studies is probably a couple of hundred times higher than what you would be exposed to from using nail polish every week or so. So the chances of any individual phthalate producing such harm [in humans] is very slim." A more serious health risk is faced by professional nail technicians, who perform manicures over a workstation, known as a nail table, on which the client's hands rest – directly below the technician's breathing zone. In 2009, Susan Reutman, an epidemiologist with the U.S. National Institute for Occupational Safety and Health's Division of Applied Research and Technology, announced a federal effort to evaluate the effectiveness of Ventilation (architecture)#Local exhaust ventilation, downdraft vented nail tables (VNTs) in removing potential nail polish chemical and dust exposures from the technician's work area. These ventilation systems have potential to reduce worker exposure to chemicals by at least 50%. Many nail technicians will often wear masks to cover their mouth and nose from inhaling any of the harsh dust or chemicals from the nail products. According to Reutman, a growing body of scientific literature suggests that some inhaled and absorbed organic solvents found in nail salons such as glycol ethers and carbon disulfide may have adverse effects on reproductive health. These effects may including birth defects, low birth weight, miscarriage, and preterm birth. Nail polish formulations may include ingredients that are toxic or affect other health problems. One controversial family of ingredient are phthalates, which are implicated as endocrine disruptors and linked to problems in the endocrine system and increased risk of diabetes. Manufacturers have been pressured by consumer groups to reduce or to eliminate potentially-toxic ingredients, and in September 2006, several companies agreed to phase out dibutyl phthalates. There are no universal consumer safety standards for nail polish, however, and while formaldehyde has been eliminated from some nail polish brands, others still use it.

The U.S. city of San Francisco enacted a city ordinance, publicly identifying establishments that use nail polishes free of the "toxic trio" of dibutyl phthalate, toluene, and formaldehyde. Nail polish is considered a hazardous waste by some regulatory bodies such as the Los Angeles, California, Los Angeles Department of Public Works. Many countries have strict restrictions on sending nail polish by mail. The "toxic trio" are currently being phased out, but there are still components of nail polish that could cause environmental concern. Leaking out of the bottle into the soil could cause contamination in ground water. Chromium(III) oxide green and Prussian blue are common in nail polish and have shown evidence of going through chemical degradation, which could have a detrimental effect on health.


Nail salons: How to be safe at work – Oregon OSHA