A motorcycle helmet is a type of helmet used by motorcycle riders. Motorcycle helmets contribute to motorcycle safety by protecting the rider's head in the event of an impact. They reduce the risk of head injury by 69% and the risk of death by 42%. Their use is required by law in many countries. Motorcycle helmets consist of a polystyrene foam inner shell that absorbs the shock of an impact, and a protective plastic outer layer. Several variations exist, notably helmets that cover the chin area and helmets that do not. Some helmets provide additional conveniences, such as ventilation, face shields, sun visors, ear protection or intercom.

on a Brough Superior SS100 The origins of the crash helmet date back to the Brooklands race track in early 1914 where a medical officer, Dr. Eric Gardner, noticed he was seeing a motor cyclist with head injuries about every 2 weeks. He got a Mr. Moss of Bethnal Green to make canvas and shellac helmets stiff enough to stand a heavy blow and smooth enough to glance off any projections it encountered. He presented the design to the Auto-Cycle Union where it was initially condemned, but later converted to the idea and made them compulsory for the 1914 Isle of Man TT races, although there was resistance from riders. Gardner took 94 of these helmets with him to the Isle of Man, and one rider who hit a gate with a glancing blow was saved by the helmet. Dr. Gardner received a letter later from the Isle of Man medical officer stating that after the T.T. they normally had "several interesting concussion cases" but that in 1914 there were none. In May 1935, T. E. Lawrence (known as Lawrence of Arabia) had a crash on a Brough Superior SS100 on a narrow road near his cottage near Wareham. The accident occurred because a dip in the road obstructed his view of two boys on bicycles. Swerving to avoid them, Lawrence lost control and was thrown over the handlebars. He was not wearing a helmet, and suffered serious head injuries which left him in a coma; he died after six days in the hospital. One of the doctors attending him was Hugh Cairns, a neurosurgeon, who after Lawrence's death began a long study of what he saw as the unnecessary loss of life by motorcycle despatch riders through head injuries. Cairns' research led to the increased use of crash helmets by both military and civilian motorcyclists.

A 2008 systematic study showed that helmets reduce the risk of head injury by around 69% and the risk of death by around 42%. Although it was once speculated that wearing a motorcycle helmet increased neck and spinal injuries in a crash, recent evidence has shown the opposite to be the case: helmets protect against cervical spine injury. A study that is often cited when advancing the argument that helmets might increase the incidence of neck and spinal injuries dates back to the mid-1980s and "used flawed statistical reasoning".

There are five basic types of helmets intended for motorcycling, and others not intended for motorcycling but which are used by some riders. All of these types of helmets are secured by a chin strap, and their protective benefits are greatly reduced, if not eliminated, if the chin strap is not securely fastened so as to maintain a snug fit. From most to least protective, as generally accepted by riders and manufacturers, the helmet types are: 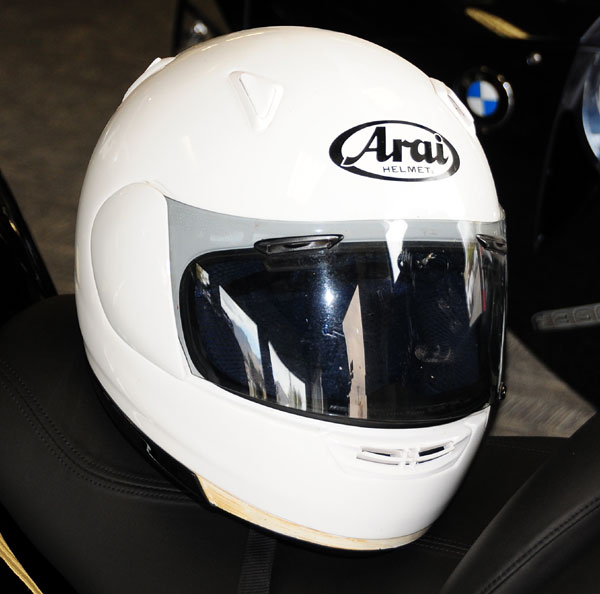 A full face helmet covers the entire head, with a rear that covers the base of the skull, and a protective section over the front of the chin. Such helmets have an open cutout in a band across the eyes and nose, and often include a clear or tinted transparent plastic face shield, known as a visor, that generally swivels up and down to allow access to the face. Many full face helmets include vents to increase the airflow to the rider. The significant attraction of these helmets is their protectiveness. Some wearers dislike the increased heat, sense of isolation, lack of wind, and reduced hearing of such helmets. Full-face helmets intended for off-road or motocross use sometimes omit the face shield, but extend the visor and chin portions to increase ventilation, since riding off-road is a very strenuous activity. Studies have shown that full face helmets offer the most protection to motorcycle riders because 35% of all crashes showed major impact on the chin-bar area. Wearing a helmet with less coverage eliminates that protection — the less coverage the helmet offers, the less protection for the rider.

The motocross and off-road helmet has clearly elongated chin and visor portions, a chin bar, and partially open face to give the rider extra protection while wearing goggles and to allow the unhindered flow of air during the physical exertion typical of this type of riding. The visor allows the rider to dip his or her head and provide further protection from flying debris during off-road riding. It also serves the obvious purpose of shielding the wearer's eyes from the sun. Originally, off-road helmets did not include a chin bar, with riders using helmets very similar to modern open face street helmets, and using a face mask to fend off dirt and debris from the nose and mouth. Modern off-road helmets include a (typically angular, rather than round) chin bar to provide some facial impact protection in addition to protection from flying dirt and debris. When properly combined with goggles, the result provides most of the same protective features of full face street helmets.

Modular (flip-up) helmet, closed and open A hybrid between full face and open face helmets for street use is the modular or "flip-up" helmet, also sometimes termed "convertible" or "flip-face". When fully assembled and closed, they resemble full face helmets by bearing a chin bar for absorbing face impacts. Its chin bar may be pivoted upwards (or, in some cases, may be removed) by a special lever to allow access to most of the face, as in an open face helmet. The rider may thus eat, drink or have a conversation without unfastening the chinstrap and removing the helmet, making them popular among motor officers. It is also popular with people who use eyeglasses as it allows them to fit a helmet without removing their glasses. Many modular helmets are designed to be worn only in the closed position for riding, as the movable chin bar is designed as a convenience feature, useful while not actively riding. The curved shape of an open chin bar and face shield section can cause increased wind drag during riding, as air will not flow around an open modular helmet in the same way as a three-quarters helmet. Since the chin bar section also protrudes further from the forehead than a three-quarters visor, riding with the helmet in the open position may pose increased risk of neck injury in a crash. Some modular helmets are dual certified as full face and open face helmet. The chin bar of those helmets offer real protection and they can be used in the "open" position while riding. An example of such a helmet would be the BMW Motorrad System 6. As of 2008, there have not been wide scientific studies of modular helmets to assess how protective the pivoting or removable chin bars are. Observation and unofficial testing suggest that significantly greater protection exists beyond that for an open face helmet, and may be enough to pass full-face helmet standardized tests, but the extent of protection is not fully established by all standards bodies. The DOT standard does not require chin bar testing. The Snell Memorial Foundation recently certified a flip-up helmet for the first time. ECE 22.05 allows certification of modular helmets with or without chin bar tests, distinguished by -P (protective lower face cover) and -NP (non-protective) suffixes to the certification number, and additional warning text for non-certified chin bars.

The open face, or "three-quarters", helmet covers the ears, cheeks, and back of the head, but lacks the lower chin bar of the full face helmet. Many offer snap-on visors that may be used by the rider to reduce sunlight glare. An open face helmet provides the same rear protection as a full face helmet, but little protection to the face, even from non-crash events. Bugs, dust, or even wind to the face and eyes can cause rider discomfort or injury. As a result, it is not uncommon (and in some U.S. states, is required by law) for riders to wear wrap-around sunglasses or goggles to supplement eye protection with these helmets. Alternatively, many open face helmets include, or can be fitted with, a face shield, which is more effective in stopping flying insects from entering the helmet.

The half helmet, also referred to as a "Shorty" in the United States and "Pudding Basin" or TT helmet in the UK and popular with Rockers and road racers of the 1960s in the British Isles. It has essentially the same front design as an open face helmet but without a lowered rear in the shape of a bowl. The half helmet provides the minimum coverage generally allowed by law in the U.S., and British Standards 2001:1956. As with the open face, it is not uncommon to augment this helmet's eye protection through other means such as goggles. Because of their inferiority compared to other helmet styles, some Motorcycle Safety Foundations prohibit the use of half helmets now. Notable UK manufacturers included Everoak, Chas Owens and, currently, Davida.

There are other types of headwear often called "beanies," "brain buckets", or "novelty helmets", a term which arose since they are uncertified and cannot legally be called motorcycle helmets in some jurisdictions. Such items are often smaller and lighter than helmets made to U.S. Department of Transportation (DOT) standards, and are unsuitable for crash protection because they lack the energy-absorbing foam that protects the brain by allowing it to come to a gradual stop during an impact. A "novelty helmet" can protect the scalp against sunburn while riding and – if it stays on during a crash – might protect the scalp against abrasion, but it has no capability to protect the skull or brain from an impact. In the US, 5% of riders wore non-DOT compliant helmets in 2013, a decrease from 7% the previous year.

Although black helmets are popular among motorcyclists, one study determined they offer the least visibility to motorists. Riders wearing a plain white helmet rather than a black one were associated with a 24% lower risk of suffering a motorcycle accident injury or death. This study also notes "Riders wearing high visibility clothing and white helmets are likely to be more safety conscious than other riders."