Manufacturing is the production of goods through the use of labor, machines, tools, and
chemical A chemical substance is a form of matter having constant chemical composition and characteristic properties. Some references add that chemical substance cannot be separated into its constituent elements by physical separation methods, i.e., wit ...
or biological processing or formulation. It is the essence of secondary sector of the economy. The term may refer to a range of human activity, from handicraft to high-tech, but it is most commonly applied to industrial design, in which raw materials from the primary sector are transformed into finished goods on a large scale. Such goods may be sold to other manufacturers for the production of other more complex products (such as
aircraft An aircraft is a vehicle that is able to flight, fly by gaining support from the Atmosphere of Earth, air. It counters the force of gravity by using either Buoyancy, static lift or by using the Lift (force), dynamic lift of an airfoil, or in a ...
, household appliances, furniture, sports equipment or automobiles), or distributed via the tertiary industry to end users and consumers (usually through wholesalers, who in turn sell to retailers, who then sell them to individual customers). Manufacturing engineering, or the manufacturing process, are the steps through which raw materials are transformed into a final product. The manufacturing process begins with the product design, and Bill of materials, materials specification from which the product is made. These materials are then modified through manufacturing processes to become the required part. Modern manufacturing includes all intermediate processes required in the production and integration of a product's components. Some industries, such as Fabrication (semiconductor), semiconductor and Fabrication (metal), steel manufacturers, use the term ''fabrication'' instead. The manufacturing sector is closely connected with the engineering and industrial design. Examples of major manufacturers in North America include General Motors Corporation, General Electric, Procter & Gamble, General Dynamics, Boeing, Pfizer, Precision Castparts, and Fiat Chrysler Automobiles. Examples in Europe include Volkswagen Group, Siemens, BASF and Michelin. Examples in Asia include Toyota Industries, Toyota, Yamaha, Panasonic, LG, Samsung and Tata Motors. 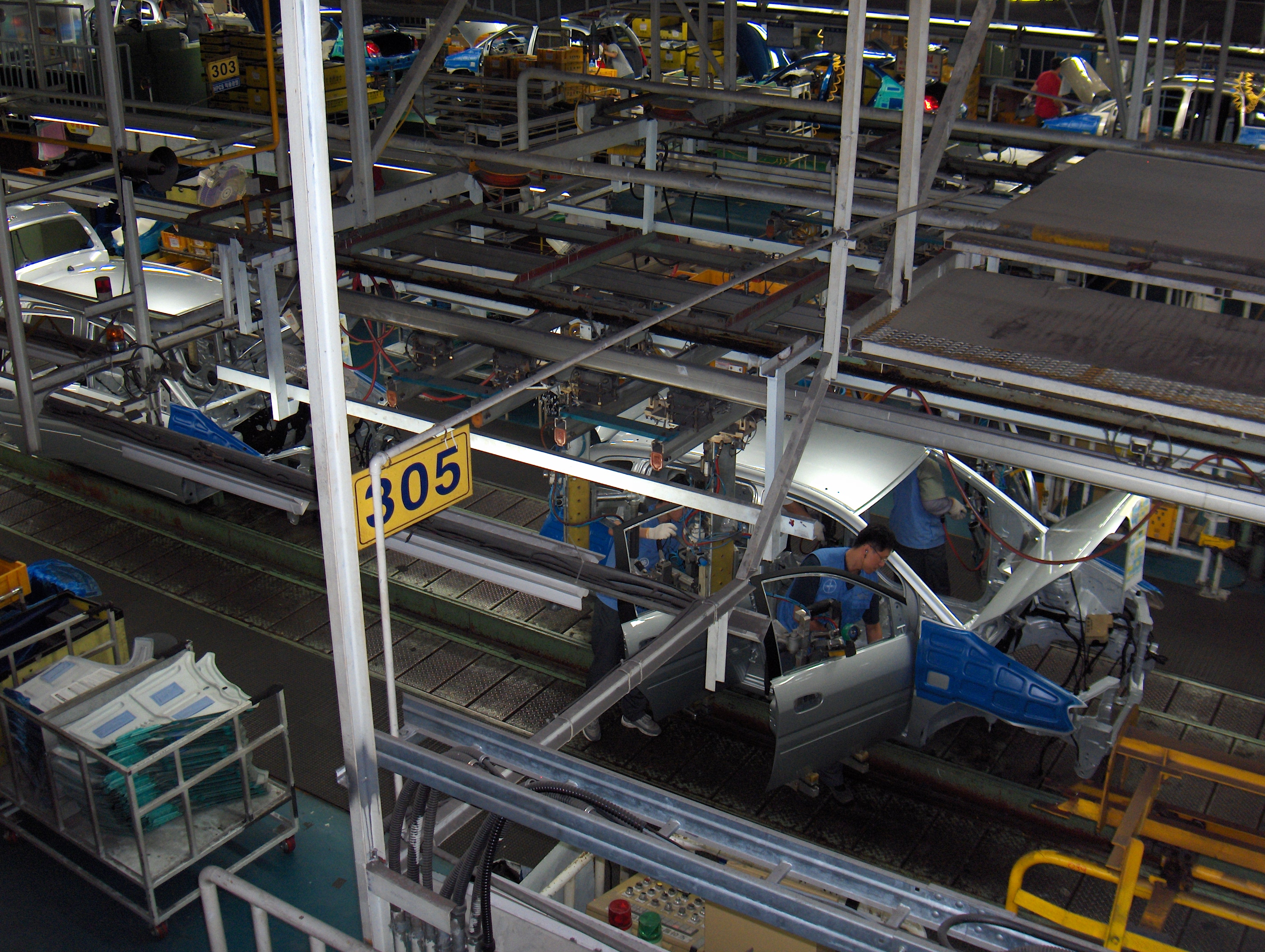 Manufacturing began in the 19th century. It was usually carried out by single skilled artisans with assistants. Training was by apprenticeship. In much of the pre-industrial world, the guild system protected the privileges and trade secrets of urban artisans. In the pre-industrial world, most manufacturing occurred in rural areas, where household-based manufacturing served as a supplemental subsistence strategy to agriculture (and continues to do so in places). Entrepreneurs organized a number of manufacturing households into a single enterprise through the putting-out system. The factory system was first adopted in United Kingdom, Britain at the beginning of the Industrial Revolution in the late 18th century and later spread around the world. The main characteristic of the factory system is the use of machinery, originally powered by water or steam and later by electricity. Increased use of economies of scale, the centralization of factories, and standardization of interchangeable parts were adopted in the American system of manufacturing in the nineteenth century. The mechanized assembly line was introduced to assemble parts in a repeatable fashion, with individual workers performing specific steps during the process. This led to significant increases in efficiency, lowering the cost of the end process. Later, automation was introduced to incrementally replace human operators, a trend that has accelerated with the development of the computer and the robot. Soviet collectivism, Manufacturing in the Soviet Union was based on collectivism.

Emerging technologies have provided some new growth in advanced manufacturing employment opportunities in the Rust Belt, Manufacturing Belt in the United States. Manufacturing provides important material support for national infrastructure and for defense (military), national defense. On the other hand, most manufacturing may involve significant social and environmental costs. The clean-up costs of hazardous waste, for example, may outweigh the benefits of a product that creates it. Hazardous materials may expose workers to health risks. These costs are now well known and there is effort to address them by improving efficiency, reducing waste, using industrial symbiosis, and eliminating harmful chemicals. The negative costs of manufacturing can also be addressed legally. Developed countries regulate manufacturing activity with labor laws and Environmental policy, environmental laws. Across the globe, manufacturers can be subject to regulations and Ecotax, pollution taxes to offset the Environmental impact of manufacturing, environmental costs of manufacturing activities. Labor unions and craft guilds have played a historic role in the negotiation of worker rights and wages. Environment laws and labor protections that are available in developed nations may not be available in the third world. Tort law and product liability impose additional costs on manufacturing. These are significant dynamics in the ongoing process, occurring over the last few decades, of manufacture-based industries relocating operations to "developing-world" economies where the costs of production are significantly lower than in "developed-world" economies.

Surveys and analyses of trends and issues in manufacturing and investment around the world focus on such things as: * The nature and sources of the considerable variations that occur cross-nationally in levels of manufacturing and wider industrial-economic growth; * Competitiveness; and * Attractiveness to foreign direct investors. In addition to general overviews, researchers have examined the features and factors affecting particular key aspects of manufacturing development. They have compared production and investment in a range of Western and non-Western countries and presented case studies of growth and performance in important individual industries and market-economic sectors. On June 26, 2009, Jeff Immelt, the CEO of General Electric, called for the United States to increase its manufacturing base employment to 20% of the workforce, commenting that the U.S. has outsourced too much in some areas and can no longer rely on the financial sector and consumer spending to drive demand. Further, while U.S. manufacturing performs well compared to the rest of the U.S. economy, research shows that it performs poorly compared to manufacturing in other high-wage countries. A total of 3.2 million – one in six U.S. manufacturing jobs – have disappeared between 2000 and 2007. In the UK, EEF the manufacturers organisation has led calls for the UK economy to be rebalanced to rely less on financial services and has actively promoted the manufacturing agenda.

These are the top 50 countries by total value of manufacturing output in US dollars for its noted year according to World Bank.