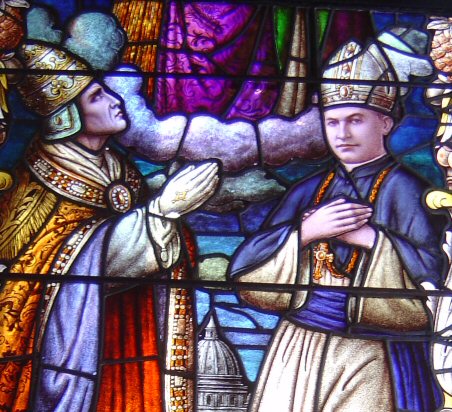 In church governance, a diocese or bishopric is the ecclesiastical district under the jurisdiction of a bishop. 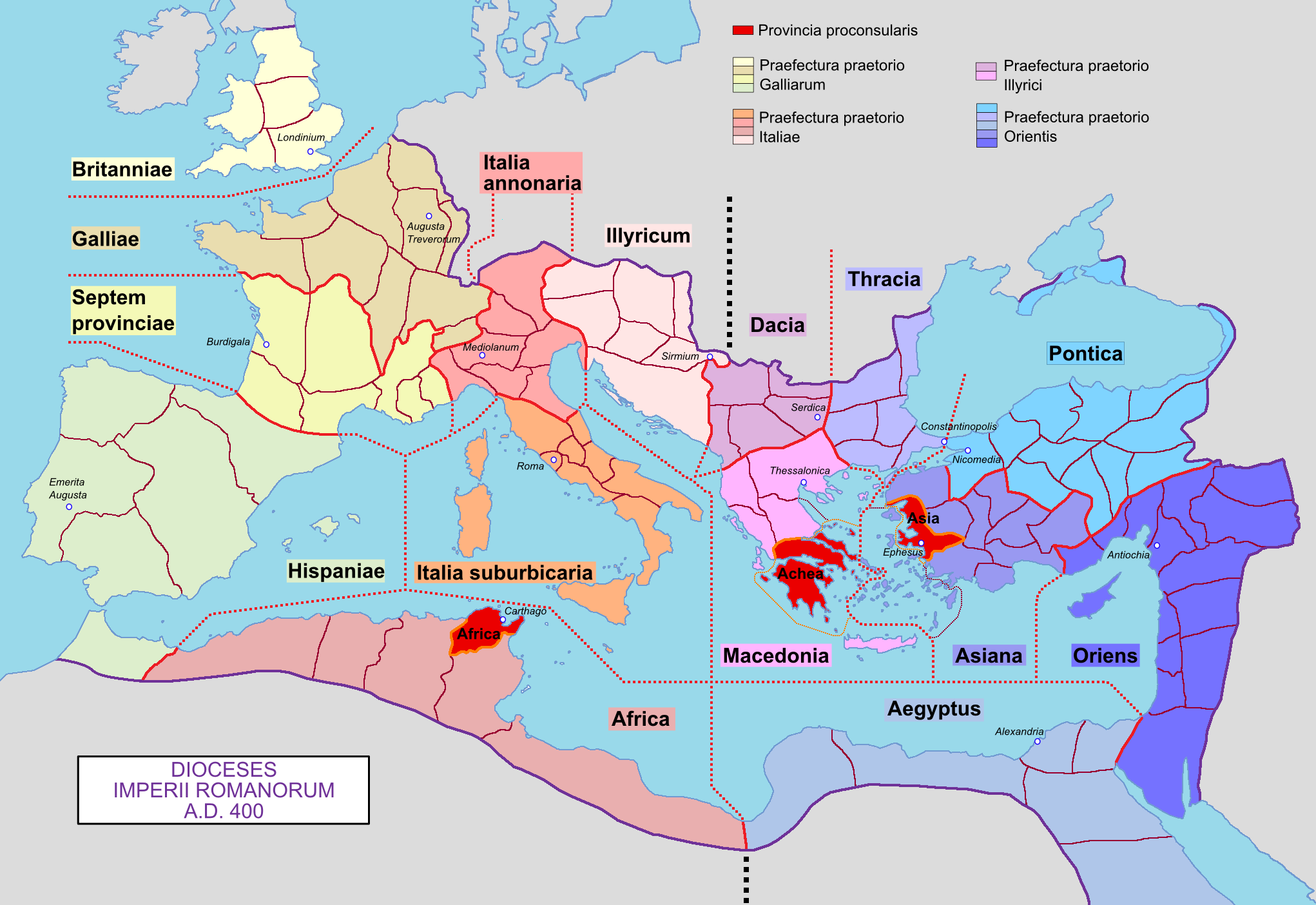 In the later organization of the Roman Empire, the increasingly subdivided provinces were administratively associated in a larger unit, the diocese (Latin ''dioecesis'', from the Greek term διοίκησις, meaning "administration"). Christianity was given legal status in 313 with the Edict of Milan. Churches began to organize themselves into dioceses based on the civil dioceses, not on the larger regional imperial districts. These dioceses were often smaller than the provinces. Christianity was declared the Empire's official religion by Theodosius I in 380. Constantine I in 318 gave litigants the right to have court cases transferred from the civil courts to the bishops. This situation must have hardly survived Julian, 361–363. Episcopal courts are not heard of again in the East until 398 and in the West in 408. The quality of these courts were low, and not above suspicion as the Bishop of Alexandria Troas found that clergy were making a corrupt profit. Nonetheless, these courts were popular as people could get quick justice without being charged fees. Bishops had no part in the civil administration until the town councils, in decline, lost much authority to a group of 'notables' made up of the richest councilors, powerful and rich persons legally exempted from serving on the councils, retired military, and bishops post-AD 450. As the Western Empire collapsed in the 5th century, bishops in Western Europe assumed a larger part of the role of the former Roman governors. A similar, though less pronounced, development occurred in the East, where the Roman administrative apparatus was largely retained by the Byzantine Empire. In modern times, many dioceses, though later subdivided, have preserved the boundaries of a long-vanished Roman administrative division. For Gaul, Bruce Eagles has observed that "it has long been an academic commonplace in France that the medieval dioceses, and their constituent ''pagi'', were the direct territorial successors of the Roman ''civitates''." Modern usage of 'diocese' tends to refer to the sphere of a bishop's jurisdiction. This became commonplace during the self-conscious "classicizing" structural evolution of the Carolingian Empire in the 9th century, but this usage had itself been evolving from the much earlier ''parochia'' ("parish"; Late Latin derived from the Greek παροικία ''paroikia''), dating from the increasingly formalized Christian authority structure in the 4th century.

Dioceses ruled by an archbishop are commonly referred to as archdioceses; most are metropolitan sees, being placed at the head of an ecclesiastical province. A few are suffragans of a metropolitan see or are directly subject to the Holy See. The term 'archdiocese' is not found in Canon Law, with the terms "diocese" and "episcopal see" being applicable to the area under the ecclesiastical jurisdiction of any bishop. If the title of archbishop is granted on ''personal'' grounds to a diocesan bishop, his diocese does not thereby become an archdiocese.

The Eastern Orthodox Church calls dioceses episkopies (from the Greek ἐπισκοπή) in the Greek tradition and eparchies (from ἐπαρχία) in the Slavic tradition.

Church of England and Anglican Communion

After the English Reformation, the Church of England retained the existing diocesan structure which remains throughout the Anglican Communion. The one change is that the areas administered under the Archbishop of Canterbury and Archbishop of York are properly referred to as dioceses, not archdioceses: they are the metropolitan bishops of their respective provinces and bishops of their own diocese and have the position of archbishop. The Anglican Church in Aotearoa, New Zealand and Polynesia in its constition uses the specific term "Episcopal Unit" for both dioceses and because of its unique three-''tikanga'' (culture) system. are the tribal-based jurisdictions of Māori (bishops) which overlap with the "New Zealand dioceses" (i.e. the geographical jurisdictions of the (European) bishops); these function like dioceses, but are never called so.

Certain Lutheran denominations such as the Church of Sweden do have individual dioceses similar to Roman Catholics. These dioceses and archdioceses are under the government of a bishop (see Archbishop of Uppsala). Other Lutheran bodies and synods that have dioceses and bishops include the Church of Denmark, the Evangelical Lutheran Church of Finland, the Evangelical Church in Germany (partially), and the Church of Norway. From about the 13th century until the German mediatization of 1803, the majority of the bishops of the Holy Roman Empire were prince-bishops, and as such exercised political authority over a principality, their so-called Hochstift, which was distinct, and usually considerably smaller than their diocese, over which they only exercised the usual authority of a bishop. Some American Lutheran church bodies such as the Evangelical Lutheran Church in America have a bishop acting as the head of the synod, but the synod does not have dioceses and archdioceses as the churches listed above. Rather, it is divided into a middle judicatory. The Lutheran Church - International, based in Springfield, Illinois, presently uses a traditional diocesan structure, with four dioceses in North America. Its current president is Archbishop Robert W. Hotes.


Church of God in Christ

The Church of God in Christ (COGIC) has dioceses throughout the United States. In the COGIC, most states are divided into at least three or more dioceses that are each led by a bishop (sometimes called a "state bishop"); some states have as many as ten dioceses. These dioceses are called "jurisdictions" within COGIC.

In The Church of Jesus Christ of Latter-day Saints, the term "bishopric" is used to describe the Mormon bishop himself, together with his two counselors, not the ward or congregation of which a bishop has charge.

Churches that have bishops, but not dioceses

In the United Methodist Church (the United States and some other countries), a bishop is given oversight over a geographical area called an episcopal area. Each episcopal area contains one or more annual conferences, which is how the churches and clergy under the bishop's supervision are organized. Thus, the use of the term "diocese" referring to geography is the most equivalent in the United Methodist Church, whereas each annual conference is part of one episcopal area (though that area may contain more than one conference). The African Methodist Episcopal Church has a similar structure to the United Methodist Church, also using the Episcopal Area. Note that the bishops govern the church as a single bench. In the British Methodist Church and Irish Methodist Church, the closest equivalent to a diocese is the 'circuit'. Each local church belongs to a circuit, and the circuit is overseen by a superintendent minister who has pastoral charge of all the circuit churches (though in practice he or she delegates such charge to other presbyters who each care for a section of the circuit and chair the local church meetings as deputies of the superintendent). This echoes the practice of the early church where the bishop was supported by a bench of presbyters. Circuits are grouped together to form Districts. All of these, combined with the local membership of the Church, are referred to as the "Connexion". This 18th-century term, endorsed by John Wesley, describes how people serving in different geographical centres are 'connected' to each other. Personal oversight of the Methodist Church is exercised by the President of the Conference, a presbyter elected to serve for a year by the Methodist Conference; such oversight is shared with the Vice-President, who is always a deacon or layperson. Each District is headed by a 'Chair', a presbyter who oversees the district. Although the district is similar in size to a diocese, and Chairs meet regularly with their partner bishops, the Methodist superintendent is closer to the bishop in function than is the Chair. The purpose of the district is to resource the circuits; it has no function otherwise.

Churches that have neither bishops nor dioceses

Many churches worldwide have neither bishops nor dioceses. Most of these churches are descended from the Protestant Reformation and more specifically the Swiss Reformation led by John Calvin. Presbyterian churches derive their name from the presbyterian form of church government, which is governed by representative assemblies of elders. The Church of Scotland is governed solely through presbyteries, at parish and regional level, and therefore has no dioceses or bishops. Congregational churches practice congregationalist church governance, in which each congregation independently and autonomously runs its own affairs. Churches of Christ, being strictly non-denominational, are governed solely at the congregational level. Most Baptists hold that no church or ecclesiastical organization has inherent authority over a Baptist church. Churches can properly relate to each other under this polity only through voluntary cooperation, never by any sort of coercion. Furthermore, this Baptist polity calls for freedom from governmental control. Most Baptists believe in "Two offices of the church"—pastor-elder and deacon—based on certain scriptures (; ). Exceptions to this local form of local governance include a few churches that submit to the leadership of a body of elders, as well as the Episcopal Baptists that have an Episcopal system. Continental Reformed churches are ruled by assemblies of "elders" or ordained officers. This is usually called Synodal government by the continental Reformed, but is essentially the same as presbyterian polity.