The Wiikwemkoong First Nation is a
First Nation The First Nations (french: Premières Nations ) are the largest group of indigenous peoples in Canada, Canadian indigenous peoples, distinct from the Inuit and Métis. Traditionally the First Nations lived south of the tree line, and mainly sout ...
on
Manitoulin Island Manitoulin Island is an island upright=1.15, Great_Britain.html"_;"title="Ireland_(left)_and_Great_Britain">Ireland_(left)_and_Great_Britain_(right),_are_large_islands_of_north-west_Europe image:Small_Island_in_Lower_Saranac_Lake.jpg.html" ; ... 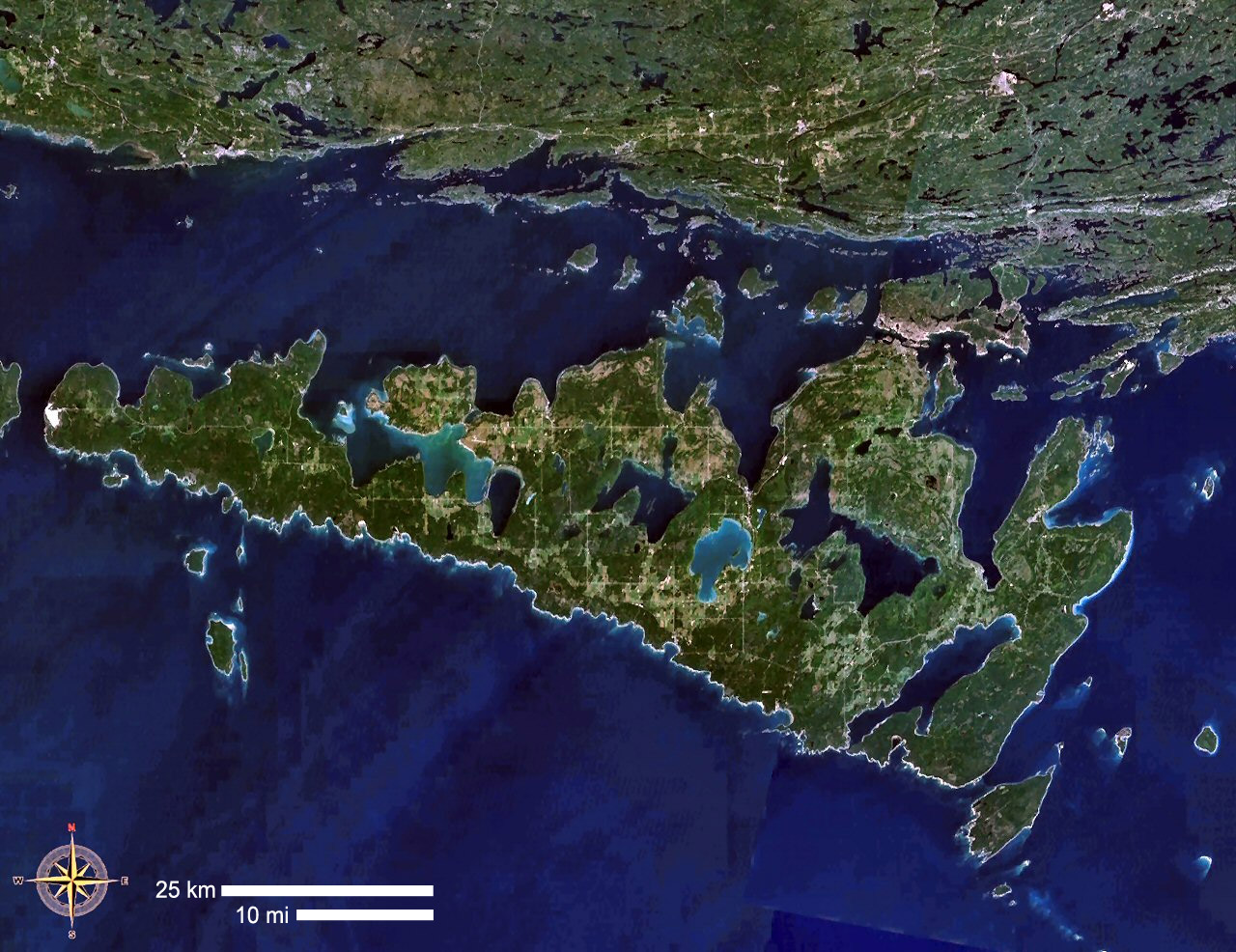 in Manitoulin District, Ontario, Manitoulin District, Ontario, Canada. Wiikwemkoong is an unceded territory, unceded Indigenous reserve in Canada, which means that it has not "relinquished title to its land to the government by treaty or otherwise." The local Ojibwe placename is ''wiikwemkong'' (Manitoulin dialect; notice the vowel dropping) with the locative ''-ong'' ('at') form of ''wiikwemik'' 'bay with a gently sloping bottom'. The spelling Wikwemikong is from dialects spoken elsewhere (or in earlier times) that retain the ''i''. The initial element ''wiikwe-'' occurs in other forms as 'bay'; the final element ''-mik'' cannot be for ''amik'' 'beaver' (its local form is ''mik''), a folk etymology that violates the rules for Algonquian stem formation. It can be identified as a variant of the medial element ''aamik-'', which appears, for example, in Southwestern Ojibwe ''minaamikaa'' 'there are breakers, shoals, banks (of sand or rocks)', which has initial ''min-'' 'islandlike'. The presence or absence of ''aa-'' is found in several medial elements in Ojibwe and other Algonquian languages. The reserve's former name was Manitoulin Unceded Indian Reserve. The Wiikwemkoong Band changed it on August 20, 1968, to Wikwemikong Unceded Indian Reserve. The reserve is occupied by Ojibwa, Odawa people, Odawa, and Potawatomi peoples under the Council of Three Fires. The current band chief is Duke Peltier.

Wiikwemkoong occupies a large peninsula on the eastern end of Manitoulin Island, which is connected to the rest of the island by an isthmus separating South Bay from Manitowaning Bay. The reserve's primary access is via Wiikwemkoong Way, which continues off the reserve as Cardwell Street and connects to Highway 6 (Ontario), Highway 6 at Manitowaning, Ontario, Manitowaning. The reserve has a land area of and is the fifth-largest Indian reserve in Canada by area. It is bordered on its west by Assiginack township, by which the peninsula is connected to the rest of Manitoulin Island. The vast majority of the reserve's border is, however, a water boundary with Northeastern Manitoulin and the Islands, by which it is nearly surrounded except for its border with Assiginack. The Point Grondine 3, Point Grondine Park, located on the mainland near Killarney, Ontario, Killarney, also belongs to the Wiikwemkoong band. This area, which has been unpopulated since the Point Grondine band moved to Wiikwemkoong proper in the 1940s, remained unoccupied and virtually unused by the band until the park was established in 2015.

From 1836 to 1862, a considerable portion of Manitoulin Island was set aside as the "Manitoulin Island Indian Reserve" under the Bond Head Treaty. The most important of the pre-confederation treaties were the Robinson Treaties because all subsequent treaties were modeled after these. In 1850, William B. Robinson, a government negotiator and former fur trader, proposed that First Nations reserves be created on the Crown Land acquired through treaties. These Reserves were intended to be the answer to what the immigrant settlers needed for land settlement. First Nation peoples would be set apart on reserves from the new settlers. The Robinson-Huron and Robinson-Superior treaties were signed in September 1850 for large territories north of the two Great Lakes. According to written records, Lake Huron and Lake Superior area leaders surrendered nearly 15 000 000 hectares of land and the islands in exchange for the establishment of 24 reserves and a payment of approximately $10 000 to be followed by additional annual payment of $2700. In 1862, most of the islands were again ceded to the government of Canada under the MacDougall Treaty for new settlement by non-natives, resulting in the creation of new reserves at M'Chigeeng First Nation, West Bay, Sheguiandah, Sheshegwaning, Zhiibaahaasing First Nation, Cockburn Island and Sucker Creek. However, two bands which occupied the land that now comprises Wiikwemkoong claimed that the bands that signed the Treaty did not represent them, and thus continued to exist as a remnant of the Manitoulin Island Indian Reserve. In 1968, an amalgamation took place among three bands: Manitoulin Island Unceded Indian Reserve, Point Grondine and South Bay. This amalgamation created the Wikwemikong Unceded Indian Reserve. The band filed a Indigenous specific land claims in Canada, claim with the Canadian government on the issue of the jurisdiction of the Wikwemikong islands in 1984, but the government denied that the band had any right to these islands in 1997. The two parties restarted negotiations in 2007. As of 2012, the claim is still ongoing. In 2014 the Constitution – Wiikwemkoong G'chi Naaknigewin – was ratified, subsequently changing the name to Wiikwemkoong Unceded Territory.

Wiikwemkoong Way is the key route in the communities and connects with Ontario Highway 6. The closest airport is Manitowaning/Manitoulin East Municipal Airport in Manitowaning, Ontario. There is no commercial service from this airport. Ontario Northland operates a twice daily bus that connects to other places on Manitouland Island as well as the nearest major city, Sudbury, Ontario.

The reserve is also home to the Wiikwemkoong Cultural Festival (Wiikwemkoong Pow-Wow) which is held annually every Civic Holiday weekend (first weekend in August). This annual event is touted as the largest and oldest pow-wow in Eastern Canada. Considered to be one of the major pow wows in North America, it is attended by many aboriginal dancers who participate in competition of all age ranges, demonstrating traditional, grass, jingle and fancy dancing. Wiikwemkoong is also home to a professional theatre company, De-ba-jeh-mu-jig Theatre Group, which stages and produces plays about First Nations life and culture, within the missions ruins next to Holy Cross Church Wikwemikong, Holy Cross Church.