250px|thumb|An example of a wide receiver's positioning in an offensive formation: split end (SE) (now wide receiver), slotback_(SB),_[[tight_end_(TE),_[[wingback_(American_football).html" style="text-decoration: none;"class="mw-redirect" title="tight_end.html" style="text-decoration: none;"class="mw-redirect" title="slotback (SB), slotback_(SB),_[[tight_end_(TE),_[[wingback_(American_football)">wingback_(WB),_and_flanker_(FL)_position..html" style="text-decoration: none;"class="mw-redirect" title="tight end">slotback (SB), [[tight end (TE), [[wingback (American football)">wingback (WB), and flanker (FL) position.">tight end">slotback (SB), [[tight end (TE), [[wingback (American football)">wingback (WB), and flanker (FL) position. A wide receiver (WR), also referred to as a wideout, formerly a split end, is an [[eligible receiver]] in [[gridiron football]]. A key [[skill position]] of the [[offense (American football)|offense]], it gets its name from the player being split out "wide" (near the sidelines), farthest away from the rest of the offensive formation. A forward pass-catching specialist, the wide receiver is one of the fastest players on the field alongside cornerbacks and running backs. One on either extreme of the line is typical, but several may be employed on the same play. Through 2019 only two wide receivers, Jerry Rice (in 1987 and 1993) and Michael Thomas (in 2019) have won Offensive Player of the Year. In every other year it was awarded to either a quarterback or running back. No wide receiver has ever won MVP. Jerry Rice is the leader in receptions, receiving yards, and touchdowns in the all-time list for receivers along with being a 3-time SB champion and 10-time All-Pro selections. 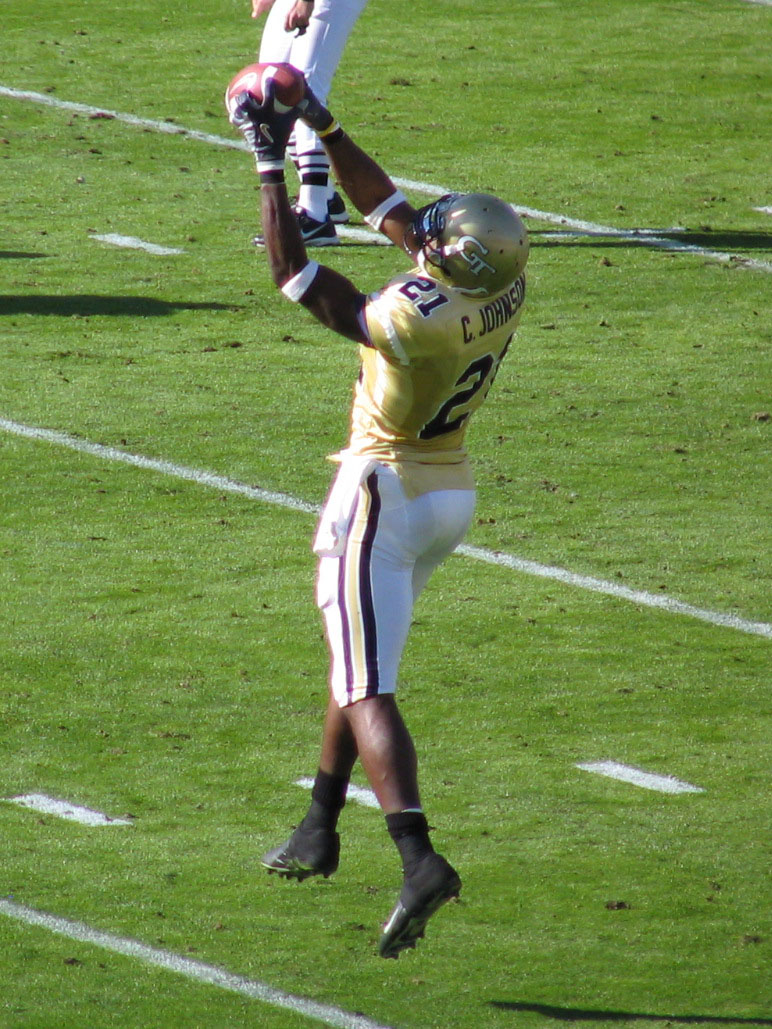 The wide receiver's principal role is to catch forward passes from the quarterback. On passing plays, the receiver attempts to avoid, outmaneuver, or simply outrun the cornerbacks or safeties typically defending him. If the receiver becomes open on his pass route, the quarterback may throw a pass to him. The receiver needs to successfully catch the ball without it touching the ground (known as a completion) and then run with the ball as far downfield as possible, hopefully reaching the end zone for to score a touchdown. Especially fast receivers are typically perceived as "deep threats", while those with good hands and perhaps shifty moves may be regarded as "possession receivers" prized for running crossing routes across the middle of the field, and, ideally, converting third down situations. Taller receivers with a height advantage over typically shorter defenders tend to play further to the outside and run deep more often, while shorter ones tend to play inside and run more routes underneath the top of the defense. 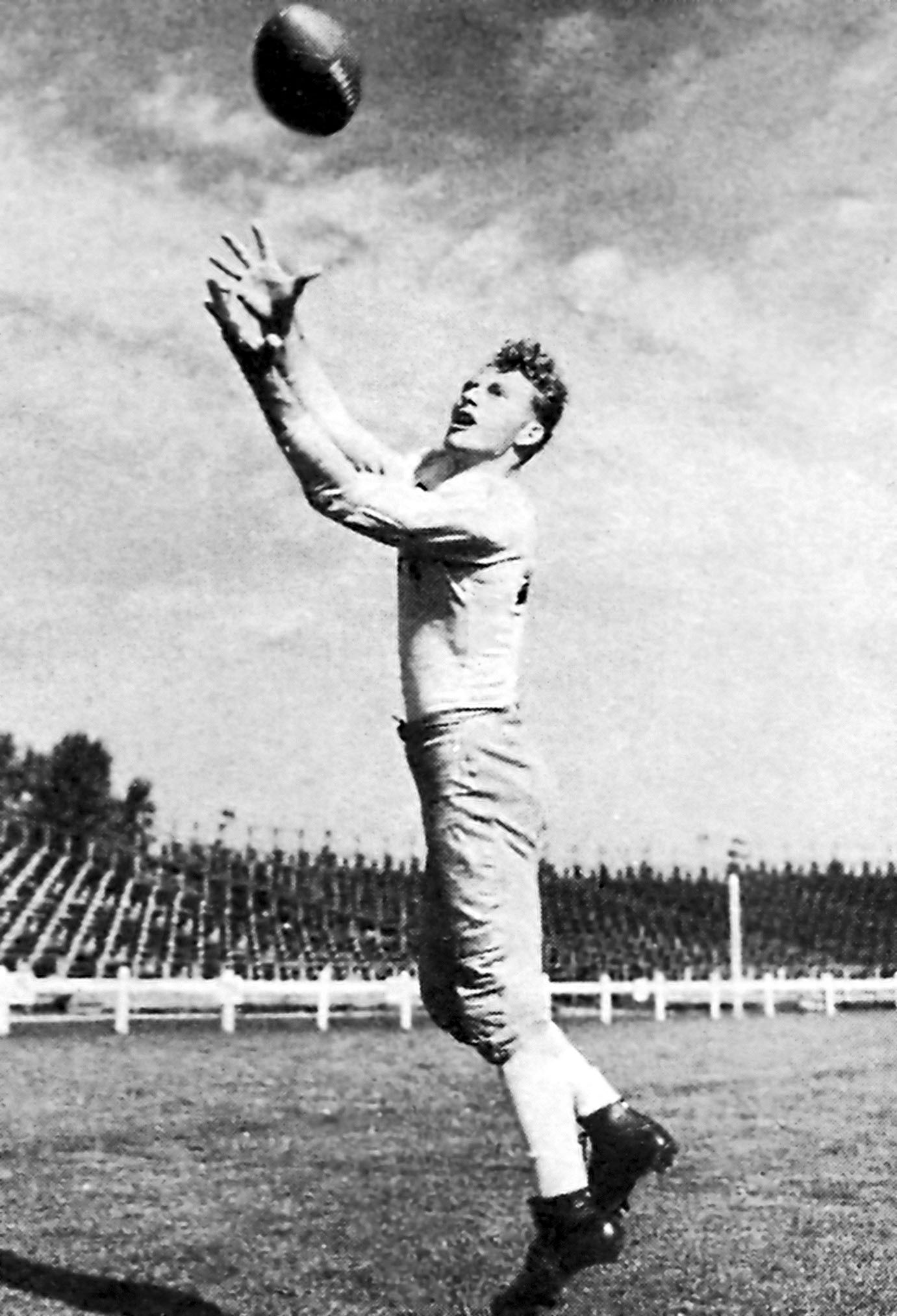 A wide receiver may block his or another defender, depending on the type of play being run. On standard running plays they will block their assigned defender for the running back. Particularly in the case of draws and other trick plays, he may run a pass route with the intent of drawing defenders away from the intended action. Well-rounded receivers are noted for skill in both roles; Hines Ward in particular received praise for his blocking abilities while also becoming the Pittsburgh Steelers all-time leading receiver and one of 13 in NFL history through 2009 with at least 1,000 receptions. Occasionally wide receivers are used to run the ball, usually in plays seeking to surprise the defense, as in an end-around or reverse. All-time NFL receiving yardage leader Jerry Rice also rushed the ball 87 times for 645 yards and 10 touchdowns in his 20 NFL seasons. In even rarer cases, receivers may pass the ball as part of an outright trick play. Like a running back, a receiver may legally pass the ball so long as they receive it behind the line of scrimmage, in the form of a handoff or backwards lateral. This sort of trick play is often employed with a receiver who has past experience playing quarterback at a lower level, such as high school, or sometimes, college. Antwaan Randle El, a four-year quarterback at Indiana University, threw a touchdown pass at the wide receiver position in Super Bowl XL playing for the Pittsburgh Steelers against the Seattle Seahawks. Wide receivers often also serve on special teams as kick or punt returners, as gunners on coverage teams, or as part of the hands team during onside kicks. Devin Hester from the Chicago Bears, touted one of the greatest kick and punt returners of all time, was listed as a wide receiver. Five-time All-Pro and eight-time Pro Bowler Matthew Slater is a gunner for the New England Patriots also listed as a wide-receiver. In the NFL, wide receivers can use the numbers 10–19 and 80–89. A "route tree" system typically used in high school and college employs numbers zero through nine, with zero being a "go route" and a nine being a "hitch route" or vice versa. In high school they are normally a part of the play call, but are usually disguised in higher levels of plays.

The wide receiver grew out of a position known as the end. Originally, the ends played on the offensive line, immediately next to the tackles, in a position now referred to as the tight end. By the rules governing the forward pass, ends (positioned at the end of the line of scrimmage) and backs (positioned behind the line of scrimmage) are eligible receivers. Most early football teams used the ends sparingly as receivers, as their starting position next to the offensive tackles at the end of the offensive formation often left them in heavy traffic with many defenders around. By the 1930s, some teams were experimenting with spreading the field by moving one end far out near the sideline, drawing the defense away from running plays and leaving them more open on passing ones. These "split ends" became the prototype for what has evolved into being called today the wide receiver. Don Hutson, who played college football at Alabama and professionally with the Green Bay Packers, was the first player to exploit the potential of the split end position. As the passing game evolved, a second de facto wide receiver was added by employing a running back in a pass-catching role rather than splitting out the "blind-side" end, who was typically retained as a blocker to protect the left side of right-handed quarterbacks. The end stayed at the end of the offensive line in what today is a tight end position, while the running back - who would line up a yard or so off the offensive line and some distance from the end in a "flank" position - became known as a "flanker". Lining up behind the line of scrimmage gave the flanker two principal advantages. First, a flanker has more "space" between themselves and their opposing defensive cornerback, who can not as easily "jam" them at the line of scrimmage; second, flankers are eligible for motion plays, which allow them to move laterally before and during the snap. Elroy "Crazy Legs" Hirsch is one of the earliest players to successfully exploit the potential of the flanker position as a member of the Los Angeles Rams during the 1950s. While some teams did experiment with more than two wide receivers as a gimmick or trick play, most teams used the pro set (of a flanker, split end, half back, full back, tight end, and quarterback) as the standard group of ball-handling personnel . An early innovator, coach Sid Gillman used 3+ wide receiver sets as early as the 1960s. In sets that have three, four, or five wide receivers, extra receivers are typically called slot receivers, as they play in the "slot" (open space) between the furthest receiver and the offensive line, typically lining up off the line of scrimmage like a flanker. The first use of a slot receiver is often credited to Al Davis, a Gillman assistant who took the concept with him as a coach of the 1960s Oakland Raiders. Other members of the Gillman coaching tree, including Don Coryell and John Madden, brought these progressive offensive ideas along with them into the 1970s and early 1980s, but it was not until the 1990s that teams began to reliably use three or more wide receivers, notably the "run and shoot" offense popularized by the Houston Cougars of the NCAA and the Houston Oilers of the NFL, and the "K Gun" offense used by the Buffalo Bills. Charlie Joiner, a member of the "Air Coryell" San Diego Chargers teams of the late 1970s and early 1980s, was the first "slot receiver" to be his team's primary receiver. Wide receivers generally hit their peak between the ages of 23 and 30, with about 80 percent of peak seasons falling within that range according to one study.

The designation for a receiver separated from the main offensive formation varies depending on how far they are removed from it and whether they begin on or off the line of scrimmage. The three principal designations are "wide receiver"/"split end", "flanker", and "slot back": * Split end (X or SE): A receiver positioned farthest from center on their side of the field which takes their stance on the line of scrimmage, necessary to meet the rule requiring seven players to be lined up on it at the snap. In a punt formation the split end is known as a gunner.