Channel 17 first went on the air on August 17, 1953 as WBUF-TV, operating as a commercial station, the second in Buffalo after then-NBC affiliated WBEN-TV (channel 4), transmitting from a 428-foot tower by Lafayette Ave. At first, WBUF-TV was locally owned and carried programs from CBS, ABC and DuMont. WGR-TV (channel 2, now WGRZ) later signed on in August 1954 and became the market's NBC affiliate, with WBEN-TV joining CBS. This left WBUF-TV with ABC and the failing DuMont network. Unable to compete with two strong VHF stations, the original owners of channel 17 took their station dark in February 1955. Only one month later in March, NBC announced that it would purchase channel 17, partly as an experiment to see if a UHF station could compete with VHF stations given sufficient signal strength, marketing promotion and investments in both programming and technical facilities. The network also hoped to expand its presence in major markets beyond the five stations where the Federal Communications Commission (FCC) allowed any network or group owner to operate full-power VHF outlets, a limit NBC had reached by 1949. A revision of the FCC's ownership policy in 1954 created openings for additional ownership of two UHF outlets. NBC expanded WBUF's transmitter power considerably to improve its signal strength and range, and built a new studio and transmitter complex on Buffalo's north side to provide service capabilities to match market-leading WBEN-TV and fast-rising WGR-TV, which took the ABC affiliation when NBC moved its programming to channel 17 in 1956. However, despite a large investment, WBUF never made much headway against WBEN-TV and WGR-TV. Part of the problem was that television manufacturers were not required to include built-in UHF tuning capability. Viewers needed a converter to watch WBUF, and even with one, the picture quality was often inferior to the VHF competition without an outdoor antenna. In fact, viewers in the eastern portion of the Buffalo metropolitan area often opted to watch NBC on WROC-TV in Rochester, which operated with full power on channel 5 at the time (WROC is now a CBS affiliate operating on virtual channel 8). Broadcaster Dave Roberts (then still known as Dave Thomas) worked at WBUF from 1956 to 1958. The final blow came in late 1956, when the FCC ended an almost decade-long competitive process and issued a construction permit for Buffalo's only remaining VHF allocation, channel 7. The winner was Churchill Broadcasting, owner of WKBW radio, for the station which was to become WKBW-TV. Realizing that it could not hope to compete against three VHF stations, NBC signed off WBUF on September 30, 1958 (two months to the day before WKBW-TV signed on) and returned its affiliation to WGR-TV. More or less by default, ABC signed with the new channel 7. After WBUF was shut down, NBC returned the channel 17 license to the FCC. The WBUF studio building was acquired by WBEN, which moved its radio and television stations there and from which WIVB-TV, the successor to WBEN-TV, still operates. 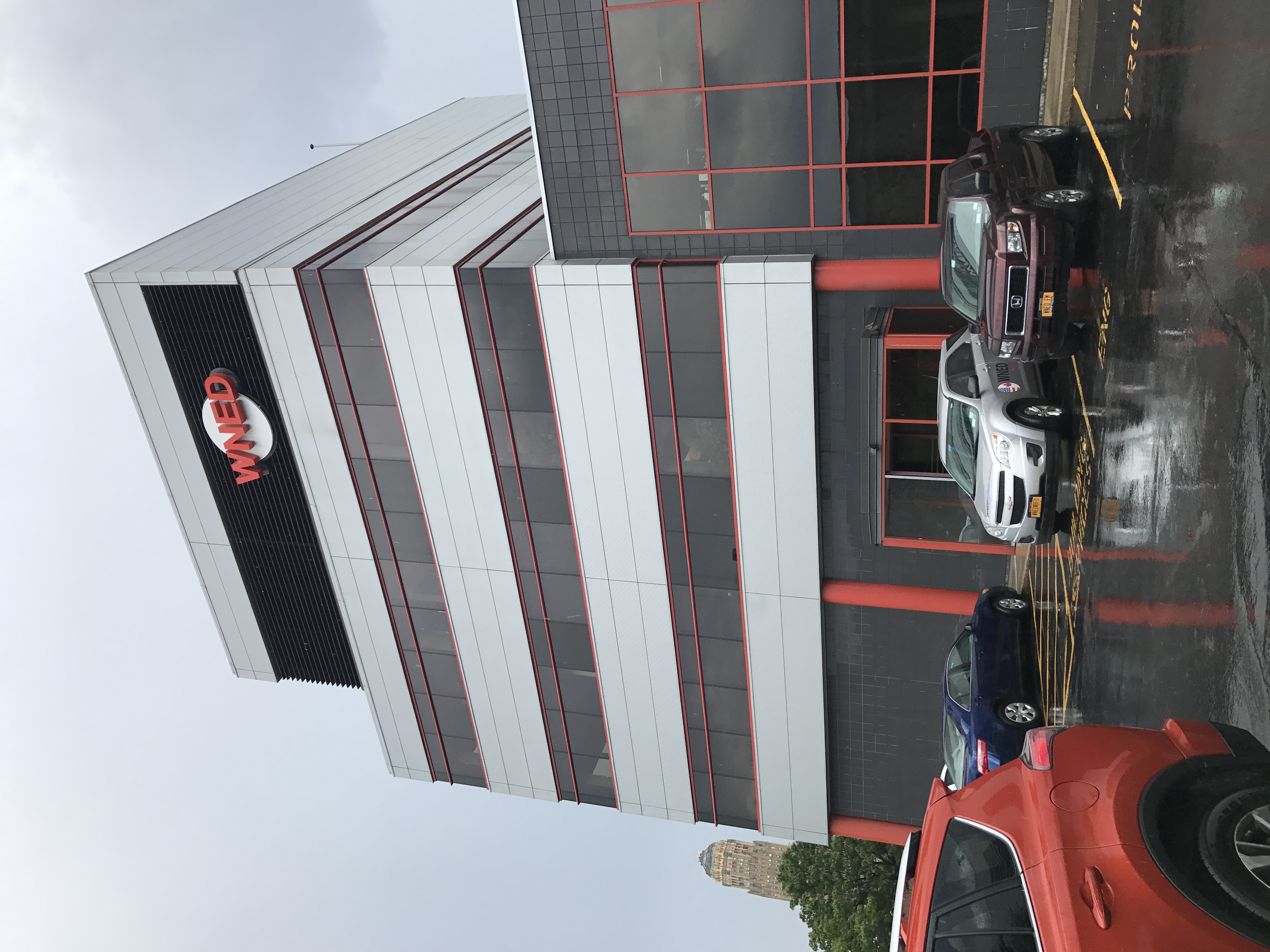 The Western New York Public Broadcasting Association, a nonprofit educational group, was granted a new construction permit and channel 17 returned to the air on March 30, 1959 as WNED-TV, the first noncommercial educational station in New York state. NBC donated equipment to the new station. Although the channel 17 license still had a commercial classification, WNED-TV operated as an educational station. Its first general manager was Leslie C. Martin Jr., who held the position from 1959 to 1966. In 1975, the Western New York Public Broadcasting Association bought two commercial radio stations, WEBR (AM) and WREZ (FM). The AM station had been founded in 1924, while the FM station was founded as WEBR-FM in 1960, becoming WBCE in the early 1970s before becoming WREZ. The FM station was renamed WNED-FM in 1977, when it adopted a classical music format. In 1977, WEBR became the nation's first public all-news radio station and was the top-rated public radio station in the country by 1978. In 1993, it was renamed WNED (AM) after cutbacks in government funding forced it to dramatically cut its local programming in favor of network and syndicated content. The AM station was sold off to a religious broadcaster in 2012 when the Western New York Public Broadcasting Association bought Buffalo's other full NPR member, WBFO, and moved most of WNED radio's programming there. On May 23, 1987, WNED-TV signed on a sister station, WNEQ-TV, on UHF channel 23. However, WNEQ failed to gain approval to from the Canadian Radio-television and Telecommunications Commission (CRTC) to be carried on basic cable in southern Ontario, denying it access to potential viewers and donors, and both stations struggled financially. It soon became apparent that Buffalo was not big enough to support two public television stations. As a result, the Western New York Public Broadcasting Association put WNEQ-TV up for sale; it then announced the sale of WNEQ-TV to LIN Broadcasting (owner of WIVB-TV) in late 1999. Until this time, WNED-TV had maintained the old commercial license it had inherited from WBUF-TV, while WNEQ-TV had operated on a traditional non-commercial license. LIN needed WNED-TV's commercial license in order to make its acquisition viable. At one point, it seemed likely that LIN would actually purchase channel 17 from the Western New York Public Broadcasting Association. This would have resulted in the WNED-TV intellectual unit moving to channel 23 (which would have made WNEQ-TV the area's primary PBS station), while channel 17 would have become a commercial station. However, the long history of channel 17 as a PBS member station made this an undesirable option for the public broadcaster due to concerns that having WNEQ-TV become the market's sole PBS outlet would cause viewer confusion and potentially reduce the amount of donations that the station would receive. As well, WNED-TV was carried on the basic cable tier of cable systems in the Golden Horseshoe and particularly Toronto, a major source of donations during the channel's fundraising drives, while WNEQ-TV had been repeatedly denied permission by the CRTC to be carried on basic cable in Toronto, meaning the public broadcaster risked losing access to a major source of its revenue if it abandoned channel 17. The FCC was persuaded to allow channel 17 and channel 23 to swap licenses, allowing WNEQ-TV to be sold to LIN. After 42 years of being a commercial licensee operating as a non-commercial broadcaster, WNED-TV received an educational license in 2000. WNEQ-TV was sold to LIN in early 2001; that station is now WNLO and operates as the market's CW affiliate. Through the use of a digital subchannel, WNED-TV began providing ThinkBright as a second programming service in the late 2000s, covering most of New York State with 12 hours a day of regional, educational and cultural programming. It was available on all New York PBS member stations except Long Island/New York City. ThinkBright later became ThinkBright and Well, and was discontinued in 2011 to merge with World. Over time, WNED-TV has become a leading PBS member station. It produced several original programs that have been carried throughout the PBS network and its member stations such as the Mark Russell comedy specials and ''Reading Rainbow'', produced in association with the Great Plains Network until early 2006. Starting in May 2006, co-production of ''Reading Rainbow'' continued with Educate Inc. of Baltimore, Maryland, after the University of Nebraska Regents (the owners of GPN and NET) sold its long-time production interest to WNED-TV

Since March 2017 WNED has organized its online schedule using the Myers Infosys ProTrack Broadcast Management System. WNED-TV, along with sister stations WBFO and WNED-FM, began collectively referring to themselves as "Buffalo Toronto Public Media" on February 4, 2020. The rebranding, which concurrently saw WNED-TV amend its own branding to "WNED PBS", was part of a series of rebrandings connected to PBS' national November 2019 rebranding, and also reflects WNED-TV's significant Canadian viewership and financial support.

WNED-TV was simulcast on many broadcast relay station#broadcast translators|translators covering the Southern Tier of Western New York for several decades. Because of inadequate signal coverage to rural schools in the valley areas of mountainous southwestern New York State, WNED-TV once had a massive network of translator licenses – in some cases even "extra-legal." The transmitters and towers belonged to the Chautauqua Board of Cooperative Educational Services, the experimental Appalachian Television Project, and Cattaraugus Area Television System (CATS) group and were scattered across numerous small towns in Chautauqua, Cattaraugus and Allegany counties. The network predates the FCC's discontinuation of channels 70 to 83, since some of the Cattaraugus County licenses were in that range. In addition, the CATS system originated some of its own local programming, such as live high school football games (this was possible mainly because one of the licenses, W26AA, was also a former commercial independent station, that of former CTV affiliate WNYP, whose license was still active; eventually that station was spun off to a religious broadcaster and became WNYB). The remaining stations in Chautauqua and Allegany Counties were expunged from the FCC records and presumably shut down in 2012, leaving the translator network without any remaining transmitters.

For the better part of the last four decades, WNED-TV has relied heavily on viewership in Toronto and southern Ontario for viewership and financial support; since at least 1999, it has identified as serving "Buffalo/Toronto" on-air. Toronto is the center of a market with over seven million people—seven times the population of WNED-TV's American coverage area. More than half of its members are in Canada; in February 2020, WNED officials told ''The Buffalo News'' that Canadians represented 66 percent of the station's viewership and membership revenue. Indeed, WNED-TV opted against moving its intellectual unit to channel 23 due to concerns that it would lose most of its Canadian viewership on cable. Not only does WNED-TV take its large Canadian audience into account in its programming, but more than half of its financial support comes in Canadian dollars. WNED-TV has long operated a development/sales office in Toronto (Starwood Centre at 477 Richmond Street West). Since 2017, Bell Fibe TV classifies the HD version (PBSHB) of WNED-TV as 1224 while the SD version (PBS-B) is 224.

The station's digital signal is multiplexed:

WNED-TV discontinued regular programming on its analog signal, over UHF channel 17, on April 16, 2009. The station's digital signal remained on its pre-transition UHF channel 43. Through the use of PSIP, digital television receivers display the station's virtual channel as its former UHF analog channel 17. WNED-TV offers audio simulcasts of WNED-FM and WBFO via the SAP feed on 17.4.