Vatican City (), officially the Vatican City State ( it|Stato della Città del Vaticano; la|Status Civitatis Vaticanae),—' * german: Vatikanstadt, cf. '—' (in Austria: ') * pl|Miasto Watykańskie, cf. '—' * pt|Cidade do Vaticano—' * es|Ciudad del Vaticano—' is the Holy See's independent city state, an enclave within Rome, Italy. The Vatican City State, also known as The Vatican, became independent from Italy with the Lateran Treaty (1929), and it is a distinct territory under "full ownership, exclusive dominion, and sovereign authority and jurisdiction" of the Holy See, itself a sovereign entity of international law, which maintains the city state's temporal, diplomatic, and spiritual independence. With an area of and a population of about 825, it is the smallest state in the world by both area and population. As governed by the Holy See, the Vatican City State is an ecclesiastical or sacerdotal-monarchical state (a type of theocracy) ruled by the pope who is the bishop of Rome and head of the Catholic Church. The highest state functionaries are all Catholic clergy of various national origins. After the Avignon Papacy (13091437), the popes have mainly resided at the Apostolic Palace within what is now Vatican City, although at times residing instead in the Quirinal Palace in Rome or elsewhere. The Holy See dates back to Early Christianity and is the principal episcopal see of the Catholic Church, which has approximately 1.329 billion baptised Catholic Christians in the world in the Latin Church and 23 Eastern Catholic Churches. The independent state of Vatican City, on the other hand, came into existence on 11 February 1929 by the Lateran Treaty between the Holy See and Italy, which spoke of it as a new creation, not as a vestige of the much larger Papal States (756–1870), which had previously encompassed much of central Italy. Within the Vatican City are religious and cultural sites such as St. Peter's Basilica, the Sistine Chapel, and the Vatican Museums. They feature some of the world's most famous paintings and sculptures. The unique economy of Vatican City is supported financially by donations from the faithful, by the sale of postage stamps and souvenirs, fees for admission to museums, and sales of publications.

The name was first used in the Lateran Treaty, signed on 11 February 1929, which established the modern city-state named after Vatican Hill, the geographic location of the state. "Vatican" is derived from the name of an Etruscan settlement, or located in the general area the Romans called ''Ager Vaticanus'', "Vatican territory". The official Italian name of the city is ' or, more formally, ', meaning "Vatican City State". Although the Holy See (which is distinct from the Vatican City) and the Catholic Church use Ecclesiastical Latin in official documents, the Vatican City uses Italian. The Latin name is '; this is used in official documents by the Holy See, the Church and the Pope.

The name "Vatican" was already in use in the time of the Roman Republic for the ''Ager Vaticanus'', a marshy area on the west bank of the Tiber across from the city of Rome, located between the Janiculum, the Vatican Hill and Monte Mario, down to the Aventine Hill and up to the confluence of the Cremera creek. Because of its vicinity to their arch-fiend, the Etruscan city of Veii (another naming for the ''Ager Vaticanus'' was ''Ripa Veientana'' or ''Ripa Etrusca'') and for being subjected to the floods of the Tiber, the Romans considered this originally uninhabited part of Rome insalubrious and ominous. The particularly low quality of Vatican wine, even after the reclamation of the area, was commented on by the poet Martial (40 – between 102 and 104 AD). Tacitus wrote, that in AD 69, the Year of the Four Emperors, when the northern army that brought Vitellius to power arrived in Rome, "a large proportion camped in the unhealthy districts of the Vatican, which resulted in many deaths among the common soldiery; and the Tiber being close by, the inability of the Gauls and Germans to bear the heat and the consequent greed with which they drank from the stream weakened their bodies, which were already an easy prey to disease". The toponym ''Ager Vaticanus'' is attested until the 1st century AD: afterwards, another toponym appeared, ''Vaticanus'', denoting an area much more restricted: the Vatican hill, today's St. Peter's Square, and possibly today's Via della Conciliazione. Under the Roman Empire, many villas were constructed there, after Agrippina the Elder (14 BC–18 October AD 33) drained the area and laid out her gardens in the early 1st century AD. In AD 40, her son, Emperor Caligula (31 August AD 12–24 January AD 41; r. 37–41) built in her gardens a circus for charioteers (AD 40) that was later completed by Nero, the , usually called, simply, the Circus of Nero. The Vatican Obelisk was originally taken by Caligula from Heliopolis in Egypt to decorate the ''spina'' of his circus and is thus its last visible remnant. This area became the site of martyrdom of many Christians after the Great Fire of Rome in AD 64. Ancient tradition holds that it was in this circus that Saint Peter was crucified upside-down. Opposite the circus was a cemetery separated by the Via Cornelia. Funeral monuments and mausoleums, and small tombs, as well as altars to pagan gods of all kinds of polytheistic religions, were constructed lasting until before the construction of the Constantinian Basilica of St. Peter in the first half of the 4th century. A shrine dedicated to the Phrygian goddess Cybele and her consort Attis remained active long after the ancient Basilica of St. Peter was built nearby. Remains of this ancient necropolis were brought to light sporadically during renovations by various popes throughout the centuries, increasing in frequency during the Renaissance until it was systematically excavated by orders of Pope Pius XII from 1939 to 1941. The Constantinian basilica was built in 326 over what was believed to be the tomb of Saint Peter, buried in that cemetery. From then on, the area became more populated in connection with activity at the basilica. A palace was constructed nearby as early as the 5th century during the pontificate of Pope Symmachus (reigned 498–514).

Popes gradually came to have a secular role as governors of regions near Rome. They ruled the Papal States, which covered a large portion of the Italian peninsula, for more than a thousand years until the mid-19th century, when all the territory belonging to the papacy was seized by the newly created Kingdom of Italy. For most of this time the popes did not live at the Vatican. The Lateran Palace, on the opposite side of Rome, was their habitual residence for about a thousand years. From 1309 to 1377, they lived at Avignon in France. On their return to Rome they chose to live at the Vatican. They moved to the Quirinal Palace in 1583, after work on it was completed under Pope Paul V (1605–1621), but on the capture of Rome in 1870 retired to the Vatican, and what had been their residence became that of the King of Italy.

In 1870, the Pope's holdings were left in an uncertain situation when Rome itself was annexed by the Piedmont-led forces which had united the rest of Italy, after a nominal resistance by the papal forces. Between 1861 and 1929 the status of the Pope was referred to as the "Roman Question". Italy made no attempt to interfere with the Holy See within the Vatican walls. However, it confiscated church property in many places. In 1871, the Quirinal Palace was confiscated by the King of Italy and became the royal palace. Thereafter, the popes resided undisturbed within the Vatican walls, and certain papal prerogatives were recognized by the Law of Guarantees, including the right to send and receive ambassadors. But the Popes did not recognise the Italian king's right to rule in Rome, and they refused to leave the Vatican compound until the dispute was resolved in 1929; Pope Pius IX (1846–1878), the last ruler of the Papal States, was referred to as a "prisoner in the Vatican". Forced to give up secular power, the popes focused on spiritual issues.

This situation was resolved on 11 February 1929, when the Lateran Treaty between the Holy See and the Kingdom of Italy was signed by Prime Minister and Head of Government Benito Mussolini on behalf of King Victor Emmanuel III and by Cardinal Secretary of State Pietro Gasparri for Pope Pius XI. The treaty, which became effective on 7 June 1929, established the independent state of Vatican City and reaffirmed the special status of Catholic Christianity in Italy. 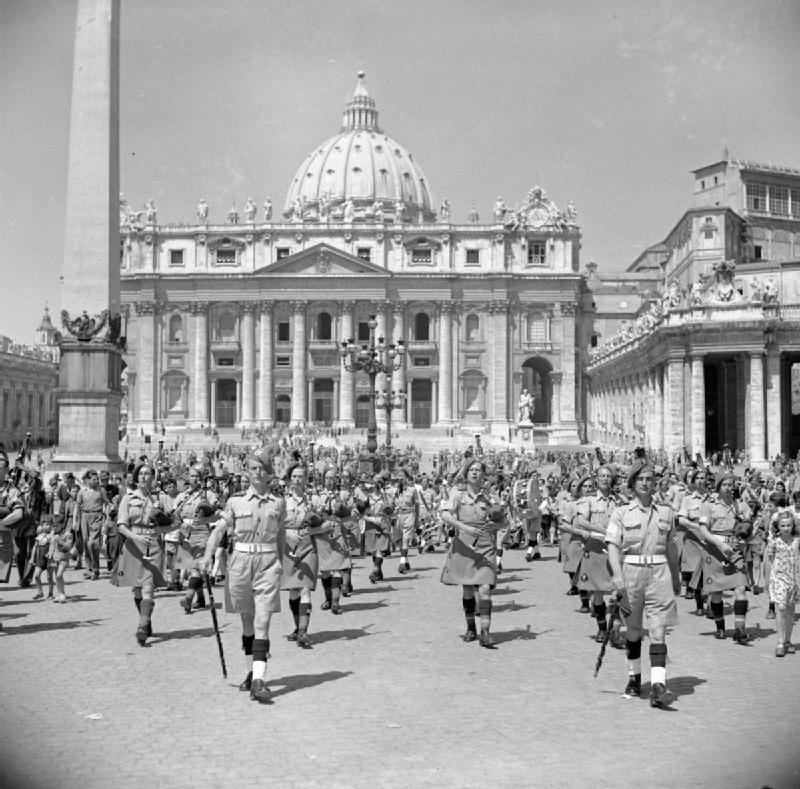 The Holy See, which ruled Vatican City, pursued a policy of neutrality during World War II, under the leadership of Pope Pius XII. Although German troops occupied the city of Rome after the September 1943 Armistice of Cassibile, and the Allies from 1944, they respected Vatican City as neutral territory. One of the main diplomatic priorities of the bishop of Rome was to prevent the bombing of the city; so sensitive was the pontiff that he protested even the British air dropping of pamphlets over Rome, claiming that the few landing within the city-state violated the Vatican's neutrality. The British policy, as expressed in the minutes of a Cabinet meeting, was: "that we should on no account molest the Vatican City, but that our action as regards the rest of Rome would depend upon how far the Italian government observed the rules of war". After the US entered into the war, the US opposed such a bombing, fearful of offending Catholic members of its military forces, but said that "they could not stop the British from bombing Rome if the British so decided". The US military even exempted Catholic pilots and crew from air raids on Rome and other Church holdings, unless voluntarily agreed upon. Notably, with the exception of Rome, and presumably the possibility of the Vatican, no Catholic US pilot or air crew refused a mission within German-held Italy. The British uncompromisingly said "they would bomb Rome whenever the needs of the war demanded". In December 1942, the UK's envoy suggested to the Holy See that Rome be declared an "open city", a suggestion that the Holy See took more seriously than was probably meant by the UK, who did not want Rome to be an open city, but Mussolini rejected the suggestion when the Holy See put it to him. In connection with the Allied invasion of Sicily, 500 US aircraft bombed Rome on 19 July 1943, aiming particularly at the railway hub. Some 1,500 people were killed; Pius XII himself, who had been described in the previous month as "worried sick" about the possible bombing, viewed the aftermath. Another raid took place on 13 August 1943, after Mussolini had been ousted from power. On the following day, the new government declared Rome an open city, after consulting the Holy See on the wording of the declaration, but the UK had decided that they would never recognize Rome as an open city.

Pius XII had refrained from creating cardinals during the war. By the end of World War II, there were several prominent vacancies: Cardinal Secretary of State, Camerlengo, Chancellor, and Prefect for the Congregation for the Religious among them. Pius XII created 32 cardinals in early 1946, having announced his intentions to do so in his preceding Christmas message. The Pontifical Military Corps, except for the Swiss Guard, was disbanded by will of Paul VI, as expressed in a letter of 14 September 1970. The Gendarmerie Corps was transformed into a civilian police and security force. In 1984, a new concordat between the Holy See and Italy modified certain provisions of the earlier treaty, including the position of Catholic Christianity as the Italian state religion, a position given to it by a statute of the Kingdom of Sardinia of 1848.