Click Here for Items Related To - University of Florida


The University of Florida (Florida or UF) is a public land-grant research university in Gainesville, Florida. It is a senior member of the State University System of Florida and traces its origins to 1853 and has operated continuously on its Gainesville campus since September 1906. After the Florida state legislature's creation of performance standards in 2013, the Florida Board of Governors designated the University of Florida as one of the three "preeminent universities" among the twelve universities of the State University System of Florida. For 2021, ''U.S. News & World Report'' ranked Florida as the sixth (tied) best public university in the United States. The University of Florida is the only member of the Association of American Universities in Florida and is classified among "R1: Doctoral Universities – Very high research activity". The university is accredited by the Southern Association of Colleges and Schools (SACS). It is the third largest Florida university by student population, and is the eighth largest single-campus university in the United States with 54,906 students enrolled for the fall 2018 semester. The University of Florida is home to 16 academic colleges and more than 150 research centers and institutes. It offers multiple graduate professional programs—including business administration, engineering, law, dentistry, medicine, pharmacy and veterinary medicine—on one contiguous campus, and administers 123 master's degree programs and 76 doctoral degree programs in eighty-seven schools and departments. The university's seal is also the seal of the state of Florida, which is on the state flag. Among its faculty and alumni are numerous Pulitzer Prize winners and 2 Nobel Prize winners. The University of Florida's intercollegiate sports teams, commonly known as the "Florida Gators", compete in National Collegiate Athletic Association (NCAA) Division I and the Southeastern Conference (SEC). In their 111-year history, the university's varsity sports teams have won 41 national team championships, 36 of which are NCAA titles, and Florida athletes have won 275 individual national championships. In addition, University of Florida students and alumni have won 126 Olympic medals, including 60 gold medals.

The University of Florida traces its origins to 1853, when the East Florida Seminary, the oldest of the University of Florida's four predecessor institutions, was founded in Ocala, Florida. On January 6, 1853, Governor Thomas Brown signed a bill that provided public support for higher education in Florida. Gilbert Kingsbury was the first person to take advantage of the legislation, and established the East Florida Seminary, which operated until the outbreak of the Civil War in 1861. The East Florida Seminary was Florida's first state-supported institution of higher learning. James Henry Roper, an educator from North Carolina and a state senator from Alachua County, had opened a school in Gainesville, the Gainesville Academy, in 1858. In 1866, Roper offered his land and school to the State of Florida in exchange for the East Florida Seminary's relocation to Gainesville. The second major precursor to the University of Florida was the Florida Agricultural College, established at Lake City by Jordan Probst in 1884. Florida Agricultural College became the state's first land-grant college under the Morrill Act. In 1903, the Florida Legislature, looking to expand the school's outlook and curriculum beyond its agricultural and engineering origins, changed the name of Florida Agricultural College to the "University of Florida," a name the school would hold for only two years.

"University of the State of Florida"

In 1905, the Florida Legislature passed the Buckman Act, which consolidated the state's publicly supported higher education institutions. The member of the legislature who wrote the act, Henry Holland Buckman, later became the namesake of Buckman Hall, one of the first buildings constructed on the new university's campus. The Buckman Act organized the State University System of Florida and created the Florida Board of Control to govern the system. It also abolished the six pre-existing state-supported institutions of higher education, and consolidated the assets and academic programs of four of them to form the new "University of the State of Florida." The four predecessor institutions consolidated to form the new university included the University of Florida at Lake City (formerly Florida Agricultural College) in Lake City, the East Florida Seminary in Gainesville, the St. Petersburg Normal and Industrial School in St. Petersburg, and the South Florida Military College in Bartow. The Buckman Act also consolidated the colleges and schools into three institutions segregated by race and gender—the University of the State of Florida for white men, the Florida Female College for white women, and the State Normal School for Colored Students for African-American men and women. The City of Gainesville, led by its mayor William Reuben Thomas, campaigned to be home to the new university. On July 6, 1905, the Board of Control selected Gainesville for the new university campus. Andrew Sledd, president of the pre-existing University of Florida at Lake City, was selected to be the first president of the new University of the State of Florida. The 1905–1906 academic year was a year of transition; the new University of the State of Florida was legally created, but operated on the campus of the old University of Florida in Lake City until the first buildings on the new campus in Gainesville were complete. Architect William A. Edwards designed the first official campus buildings in the Collegiate Gothic style. Classes began on the new Gainesville campus on September 26, 1906, with 102 students enrolled. In 1909, the school's name was simplified from the "University of the State of Florida" to the "University of Florida." The alligator was incidentally chosen as the school mascot in 1911, after a local vendor ordered and sold school pennants imprinted with an alligator emblem. The school colors, orange and blue, are a reference to the region's heritage and an homage to the Scottish and Ulster-Scots Presbyterian heritage of the original founders of Gainesville and Alachua County, most of whom were settlers from North Carolina whose ancestors were primarily Presbyterians of Scottish descent who had come to America from County Down and County Antrim in what has become Northern Ireland, while some had come directly from the Scottish Lowlands. 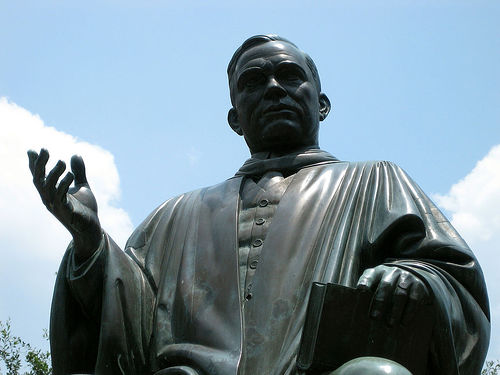 In 1909, Albert Murphree was appointed the university's second president. He organized the university into several colleges, increased enrollment from under 200 to over 2,000, and was instrumental in the founding of the Florida Blue Key leadership society. Murphree is the only University of Florida president honored with a statue on campus. In 1924, the Florida Legislature mandated women of a "mature age" (at least twenty-one years old) who had completed sixty semester hours from a "reputable educational institution" be allowed to enroll during regular semesters at the University of Florida in programs that were unavailable at Florida State College for Women. Before this, only the summer semester was coeducational, to accommodate women teachers who wanted to further their education during the summer break. Lassie Goodbread-Black from Lake City became the first woman to enroll at the University of Florida, in the College of Agriculture in 1925. John J. Tigert became the third university president in 1928. Disgusted by the under-the-table payments being made by universities to athletes, Tigert established the grant-in-aid athletic scholarship program in the early 1930s, which was the genesis of the modern athletic scholarship plan used by the National Collegiate Athletic Association.

From its inception until 1958, only white students were allowed to attend. In 1958, George H. Starke became the first Black student.

In fall 2019, the University of Florida had 56,567 students, 37,874 (67%) being undergraduate students, 12,110 (21%) being graduate students, 3,804 (7%) being professional students, 2,644 (5%) being unclassified, and 133 (0.2%) being correspondence students. Out of all 56,567 students, 3,797 were enrolled through UF Online. The ratio of women to men was 57:43 and 28 percent were graduate or professional students. Professional degree programs include architecture, dentistry, law, medicine, pharmacy and veterinary medicine. According to the Jewish Telegraphic Agency, UF has "the largest Jewish student body in the US." It is estimated that 18% of UF undergraduate and graduate students identify as Jewish compared to around 2% of the United States population. A social mobility report conducted by the New York Times in 2014 found that 48% of UF undergraduate students came from families with incomes above the 80th percentile (>$110,000), while 6% came from families in the bottom 20th percentiles (<$20,000). The same report also indicates that 30% of the student body came from families from the top 10% of households, and 3% came from the top 1%. In 2016, the University had 5,169 International students. According to the Annual Admissions Report conducted by UF in 2019, roughly 17% of the incoming freshman class was entering from outside of Florida. The majority of freshmen starting at the University of Florida come from urban backgrounds with the biggest demographic hailing from South Florida cities; the metropolitan areas of Tampa, Orlando, and Jacksonville historically form a significant share of the incoming class as well. New York and New Jersey are the biggest feeder states outside of Florida. The University of Florida is ranked second overall in the United States for the number of bachelor's degrees awarded to African-Americans, and third overall for Hispanics. The university ranks fifth in the number of doctoral degrees awarded to African-Americans, and second overall for Hispanics, and third in number of professional degrees awarded to African-Americans, and second overall for Hispanics. The university offers multiple graduate programs—including engineering, business, law and medicine—on one contiguous campus, and coordinates 123 master's degree programs and 76 doctoral degree programs in 87 schools and departments.

In its 2021 edition, ''U.S. News & World Report'' ''(USN&WR)'' ranked the University of Florida as tied for the sixth-best public university in the United States, and tied for 30th overall among all national universities, public and private. Many of the University of Florida's graduate schools have received top-50 national rankings from ''U.S. News & World Report'' with the school of education 25th, Florida's Hough School of Business 25th, Florida's Medical School (research) tied for 43rd, the Engineering School tied for 45th, the Levin College of Law tied for 31st, and the Nursing School tied for 24th in the 2020 rankings. Florida's graduate programs ranked for 2020 by ''USN&WR'' in the nation's top 50 were audiology tied for 26th, analytical chemistry 11th, clinical psychology tied for 31st, computer science tied for 49th, criminology 19th, health care management tied for 33rd, nursing-midwifery tied for 35th, occupational therapy tied for 17th, pharmacy tied for 9th, physical therapy tied for 10th, physician assistant tied for 21st, physics tied for 37th, psychology tied for 39th, public health tied for 37th, speech-language pathology tied for 28th, statistics tied for 40th, and veterinary medicine 9th.