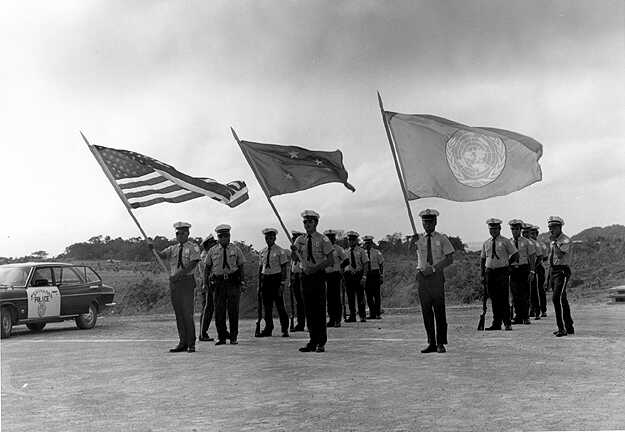 United Nations trust territories were the successors of the remaining
League of Nations mandate A League of Nations mandate was a legal status for certain territories transferred from the control of one country to another following World War I World War I or the First World War, often abbreviated as WWI or WW1, was a global war origi ...
s and came into being when the
League of Nations The League of Nations, abbreviated as LON (french: Société des Nations , abbreviated as SDN or SdN), was the first worldwide Intergovernmental organization, intergovernmental organisation whose principal mission was to maintain world peace. ...
ceased to exist in 1946. All of the trust territories were administered through the United Nations Trusteeship Council. The concept is distinct from a territory temporarily and directly governed by the United Nations. The one League of Nation mandate not succeeded by a trust territory was
South-West Africa South West Africa ( af, Suidwes-Afrika; german: Südwestafrika; nl, Zuidwest-Afrika) was the name for modern-day Namibia when it was under South African administration, from 1915 to 1990. Previously the colony of German South West Africa from 1 ...
, at
South Africa South Africa, officially the Republic of South Africa (RSA), is the southernmost country in Africa. With over Demographics of South Africa, 59 million people, it is the world's List of countries by population, 23rd-most populous nation a ...
's insistence. South Africa's apartheid regime refused to commit to preparing the territory for independence and
majority rule Majority rule is a decision rule that selects alternatives which have a majority, that is, more than half the votes. It is the binary decision rule used most often in influential decision-making bodies, including all the legislatures of dem ...
, as required by the trust territory guidelines, among other objections. South-West Africa eventually gained independence in 1990 as
Namibia Namibia (, ), officially the Republic of Namibia, is a country in Southern Africa. Its western border is the Atlantic Ocean; it shares land borders with Zambia and Angola to the north, Botswana to the east and South Africa to the south and eas ...
. All trust territories have either attained self-government or
independence upright=1.0, Pedro I of Brazil, Pedro surrounded by a crowd in São Paulo after breaking the news of Independence of Brazil, Brazil's independence on September 7, 1822. Independence is a condition of a person, nation, country, or Sovereign state ...
. The last was
Palau Palau (), officially the Republic of Palau ( pau, Beluu er a Belau) and historically ''Belau'', ''Palaos'' or ''Pelew'', is an island country located in the western Pacific Ocean. The country contains approximately 340 islands, and togethe ...
, formerly part of the
Trust Territory of the Pacific Islands The Trust Territory of the Pacific Islands (TTPI) was a United Nations trust territory in Micronesia administered by the United States The United States of America (USA), commonly known as the United States (U.S. or US), or America, is a ...
, which became a member state of the United Nations in December 1994.

* Korea: In wartime talks, Franklin D. Roosevelt proposed that Korea be placed under an American–Soviet Union, Soviet trust administration. The plan was eclipsed after Roosevelt's death on 12 April 1945, although it was expressed in the December Moscow Conference (1945), Moscow Conference, and caused considerable civil unrest in Korea. * Italian Libya: Between 1945 and 1947 the Soviet Union made various proposals that Tripolitania be placed under Soviet trusteeship for ten years, or a joint trusteeship with the United Kingdom and the United States, or that Libya as a whole become an Italian trusteeship. * Mandatory Palestine: United States government under Harry Truman American trusteeship proposal for Palestine, proposed a UN trusteeship status for the Mandatory Palestine in 1948. * Ryukyu Islands and Bonin Islands: the Treaty of San Francisco included provisions which provided the United States the right to convert its administration over the Ryukyu and Bonin Islands into a trust territory, but it never did so before sovereignty was voluntarily reverted to Japan.