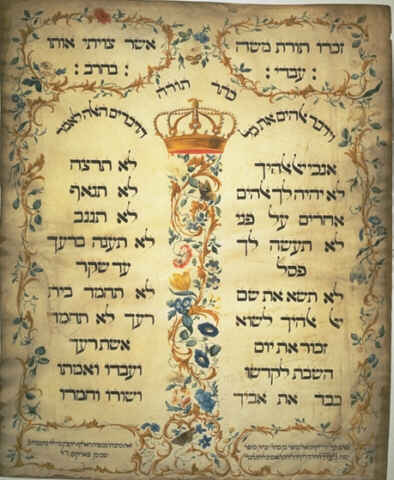 In Biblical Hebrew, the Ten Commandments, called (transliterated ), are mentioned at Exodus , Deuteronomy and Deuteronomy . In all sources, the terms are translatable as "the ten words", "the ten sayings", or "the ten matters". In the Septuagint (or LXX), the "ten words" was translated as "Decalogue", which is derived from Greek , ''dekalogos'', the latter meaning and referring to the Greek translation (in accusative) , . This term is also sometimes used in English, in addition to Ten Commandments. The Tyndale and Coverdale English biblical translations used "ten verses". The Geneva Bible used "ten commandments", which was followed by the Bishops' Bible and the Authorized Version (the "King James" version) as "ten commandments". Most major English versions use the word "commandments". The stone tablets, as opposed to the ten commandments inscribed on them, are called , ''Lukhot HaBrit'', meaning "the tablets of the covenant".

The biblical narrative of the revelation at Sinai begins in after the arrival of the children of Israel at Mount Sinai (also called Horeb). On the morning of the third day of their encampment, "there were thunders and lightnings, and a thick cloud upon the mount, and the voice of the trumpet exceeding loud", and the people assembled at the base of the mount. After "the came down upon mount Sinai", Moses went up briefly and returned with stone tablets and prepared the people, and then in "God spoke" to all the people the words of the covenant, that is, the "ten commandments" as it is written. Modern biblical scholarship differs as to whether describes the people of Israel as having directly heard all or some of the decalogue, or whether the laws are only passed to them through Moses. The people were afraid to hear more and moved "afar off", and Moses responded with "Fear not." Nevertheless, he drew near the "thick darkness" where "the presence of the Lord" was to hear the additional statutes and "judgments", all which he "wrote" in the "book of the covenant" which he read to the people the next morning, and they agreed to be obedient and do all that the had said. Moses escorted a select group consisting of Aaron, Nadab and Abihu, and "seventy of the elders of Israel" to a location on the mount where they worshipped "afar off" and they "saw the God of Israel" above a "paved work" like clear sapphire stone. The mount was covered by the cloud for six days, and on the seventh day Moses went into the midst of the cloud and was "in the mount forty days and forty nights." And Moses said, "the delivered unto me two tablets of stone written with the finger of God; and on them was written according to all the words, which the spake with you in the mount out of the midst of the fire in the day of the assembly." Before the full forty days expired, the children of Israel collectively decided that something had happened to Moses, and compelled Aaron to fashion a golden calf, and he "built an altar before it" and the people "worshipped" the calf.

After the full forty days, Moses and Joshua came down from the mountain with the tablets of stone: "And it came to pass, as soon as he came nigh unto the camp, that he saw the calf, and the dancing: and Moses' anger waxed hot, and he cast the tablets out of his hands, and brake them beneath the mount." After the events in chapters 32 and 33, the told Moses, "Hew thee two tablets of stone like unto the first: and I will write upon these tablets the words that were in the first tablets, which thou brakest." "And he wrote on the tablets, according to the first writing, the ten commandments, which the spake unto you in the mount out of the midst of the fire in the day of the assembly: and the gave them unto me." These tablets were later placed in the ark of the covenant.

Though both the Masoretic Text and the Dead Sea Scrolls show the passages of Exodus 20 and Deuteronomy 5 divided into ten specific commandments with spaces between them, many Modern English Bible translations give the appearance of more than ten imperative statements in each passage. Different religious traditions divide the seventeen verses of and their parallels in into ten commandments in different ways, shown in the table below. Some suggest that the number ten is a choice to aid memorization rather than a matter of theology. * All scripture quotes above are from the King James Version unless otherwise stated. Traditions: * T: Jewish Talmud, makes the "prologue" the first "saying" or "matter" and combines the prohibition on worshiping deities other than Yahweh with the prohibition on idolatry. * R: Reformed Christians follow John Calvin's ''Institutes of the Christian Religion'', which follows the Septuagint; this system is also used in the Anglican ''Book of Common Prayer''. * LXX: Septuagint, generally followed by Orthodox Christians. * P: Philo, has an extensive homilee on why the order is so important, with the prohibition on adultery "the greatest of the commands dealing with persons", followed by the prohibitions against stealing and then killing last. * L: Lutherans follow Luther's Large Catechism, which follows Augustine but subordinates the prohibition of images to the sovereignty of God in the First Commandment and uses the word order of Exodus 20:17 rather than Deuteronomy 5:21 for the ninth and tenth commandments. * S: Samaritan Pentateuch, with an additional commandment about Mount Gerizim as 10th. * A: Augustine follows the Talmud in combining verses 3–6, but omits the prologue as a commandment and divides the prohibition on coveting in two and following the word order of Deuteronomy 5:21 rather than Exodus 20:17. * C: ''Catechism of the Catholic Church'', largely follows Augustine. Combines the Exodus language prohibiting images of God with the command to have no other gods but the Lord, as the first commandment. Changes "the sabbath" into "the lord's day". Divides Exodus 20:17, prohibiting covetousness, into two commandments.