Swellendam is the third oldest town in South Africa (after Cape Town and Stellenbosch), a town with 17,537 inhabitants situated in the Western Cape province. The town has over 50 provincial heritage sites, most of them buildings of Cape Dutch architecture. Swellendam is situated on the N2, approximately 220 km from both Cape Town and George.

Early travellers and explorers who visited the Cape in the 16th century traded with the Khoikhoi people who lived on these shores and in the interior. When the Dutch East India Company established a replenishment station at the Cape in 1652, trade continued inland as far as Swellendam. In 1743 Swellendam was declared a magisterial district, the third-oldest in South Africa, and was named after Governor Hendrik Swellengrebel, the first South African born Governor, and his wife, Helena Ten Damme. This outlying settlement soon became a gateway to the interior, and was visited by many famous explorers and travellers including François Le Vaillant (1781), Lady Anne Barnard (1798), William John Burchell (1815) and Thomas William Bowler (1860). In time, a village was established beyond the Drostdy, where artisans including numerous wainwrights and traders settled. Swellendam was the last outpost of Dutch civilisation on the eastern frontier and thus the services of the residents of the town were of utmost importance. By 1795 maladministration and inadequacies of the Dutch East India Company caused the long-suffering burghers of Swellendam to revolt, and on 17 June 1795 they declared themselves a Republic. Hermanus Steyn was appointed as President of the Republic of Swellendam. The burghers of Swellendam started to call themselves "national burghers" – after the style of the French Revolution. However, the Republic was short-lived and was ended on 4 November 1795 when the Cape was occupied by the Kingdom of Great Britain. With the arrival of British settlers in the early 19th century the Overberg boomed, and Swellendam was soon the heart of the mercantile empire of Barry and Nephews, created by Joseph Barry, which dominated trade in the area up until 1870. The Breede River is the only navigable river in South Africa and ships sailed 35 km up river to Malgas to unload and load merchandise. By the middle of the 19th century, the eastern districts had been colonised by the British settlers and Swellendam was a thriving metropolis. The town served as a useful refreshment station on the long, slow journey up the coast. Today Swellendam is a flourishing agricultural area, and has many attractive and historic buildings which serve as a reminder of its past. The first known sketch of Swellendam was of the Drostdy, by Johannes Schumacher in 1776, when he accompanied the son of Governor Swellengrebel to the town. Today the Drostdy forms part of a museum complex that consist of several heritage sites, namely the Drostdy, the old Gaol and Mayville. In June 2011, the Swellendam Municipality area, which includes Barrydale, Suurbraak, Malgas, Infanta and Stormsvlei, re-declared itself a Republic. This republic is dedicated to the principles of the New South Africa, and celebrates rural life, racial harmony, respect for nature and wildlife, and aims to promote sustainability and an "unplugged" way of life for all to enjoy.

Some of the well known families that settled in the region and have stayed for decades are the Barry family, the Moodies from Scotland, the Steyns, the Streicher family, the van Eedens, the Rothmanns, the Tomlinson and the Dunn family. Both Johannes Brand and Francis Reitz spent childhood time in the same Cape Dutch house in Swellendam. Both became presidents of the Orange Free State.

The region has a predominantly Mediterranean climate. There are long summer days in January and February. During February and March, summer draws to a close, with prevailing South Easter winds. April and May are autumnal months, with milder days and occasional showers. June and July bring the Cape winter, with mild weather, rain and possible snow on the mountain tops. August and September are the start of spring. 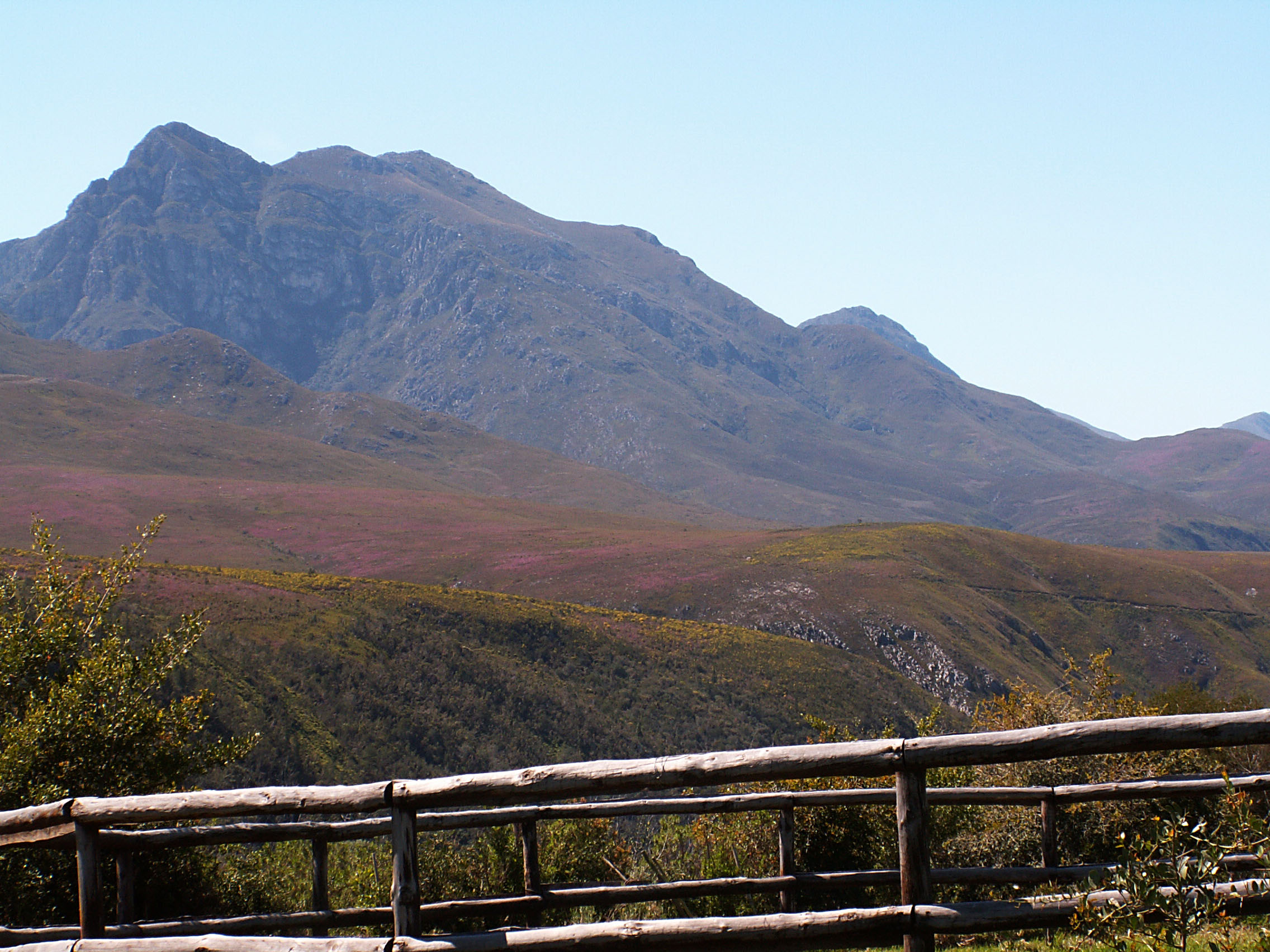 Three nature reserves are situated near Swellendam, Marloth Nature Reserve, Sanbona Wildlife Reserve and Bontebok National Park. Bontebok National Park is where the rare bontebok was protected when it was close to extinction. The population has increased from 17 individuals in 1931 to a sustainable number today. The area is botanically diverse with an abundance of wild flowers and fynbos. The 250ha indigenous forest at Grootvadersbosch is the most noteworthy in the southwestern Cape. Woods like these are rare to find in the Cape this far west of the Knysna forests. Wildlife such as the formerly endangered bontebok and Cape mountain zebra inhabit the area. Other species include bushbuck, klipspringer, grey rhebuck, Cape grysbok, baboon, mongoose, genet and the occasional leopard, as well as a species of ghost frog and a unique forest emperor butterfly. Over 200 bird species found near the town include waterfowl, the crowned eagle, black eagle, Narina trogon, paradise flycatcher and the Knysna woodpecker. Witsand, a small coastal town about 50 km from Swellendam, is one of the best whale viewing spots on the South coast as it is the largest whale nursery in South Africa. The town is situated at the foot of the Langeberg, and there are many hiking trails, ranging from day-walks to a 5 to 7-day trail.

Wheat, canola, oats, sheep and dairy farming is practised in the area. Sentraal-Suid Koöperasie serves as a co-operative in the area.

May 2007 the Swellendam VOR SWV 114.4 MHz was permanently withdrawn.

Drostdy arms — In 1804, when the Cape Colony was ruled by the Batavian Republic, the government assigned armorial seals to each of the drostdyen, i.e. administrative districts. Swellendam was given the arms of its founder, Hendrik Swellengrebel, namely a golden shield displaying a blue fleur de lis with a red band. An anchor was placed behind the shield. The British authorities discontinued the drostdy seals in 1814, and replaced them with the royal coat of arms. Municipality (1) — The town of Swellendam established a municipality in 1843. Some time later, the town council decided to adopt the old drostdy arms (although it was not the legal successor to the drostdy). It mistook the fleur de lis for a sheaf of wheat, and thus actually created a new design. Municipality (2) — In 1929, the town council learned that the Swellengrebel arms actually depicted a fleur de lis and not a sheaf of wheat. It changed the municipal arms accordingly. Both arms were depicted o
cigarette cards
issued in 1931. Divisional council — The divisional council, i.e. the local authority for the rural areas outside the town, assumed its own coat of arms on 15 November 1974. and registered it at the Bureau of Heraldry in October 1975. The arms - ''Per pale Azure and Or, a fleur-de-lis and in chief two mullets of six points counterchanged'', i.e. a shield divided vertically into blue and gold, and a fleur de lis below two six-pointed stars - were designed by Cornelis Pama. The crest was an anchor entwined with a grapevine with the motto ''Lucem spero''.


History of Swellendam on Xplorio