South West Africa ( af|Suidwes-Afrika; german: Südwestafrika; nl|Zuidwest-Afrika) was the name for modern-day Namibia when it was under South African administration, from 1915 to 1990. Previously the colony of German South West Africa from 1884–1915, it was made a League of Nations mandate of the British-ruled Union of South Africa following Germany’s defeat in World War I. Although the mandate was abolished by the UN in 1966, South African rule continued despite it being illegal under international law. The territory was administered directly by the South African government from 1915 to 1978, when the Turnhalle Constitutional Conference laid the groundwork for semi-autonomous rule. During an interim period between 1978 and 1985, South Africa gradually granted South West Africa a limited form of home rule, culminating in the formation of a Transitional Government of National Unity. In 1990, South West Africa was granted independence as the Republic of Namibia with the exception of Walvis Bay and the Penguin Islands, which continued to remain under South African rule until 1994.

As a German colony from 1884, it was known as German South West Africa (''Deutsch-Südwestafrika''). Germany had a difficult time administering the territory, which experienced many insurrections against the harsh German rule, especially those led by guerilla leader Jacob Morenga. The main port, Walvis Bay, and the Penguin Islands were annexed by the UK in 1878, becoming part of the Cape Colony in 1884. Following the creation of the Union of South Africa in 1910, Walvis Bay became part of the Cape Province. As part of the Heligoland-Zanzibar Treaty in 1890, a corridor of land taken from the northern border of Bechuanaland, extending as far as the Zambezi river, was added to the colony. It was named the Caprivi Strip (''Caprivizipfel'') after the German Chancellor Leo von Caprivi.

There was a protracted struggle between South Africa and forces fighting for independence, particularly after the formation of the South West Africa People's Organisation (SWAPO) in 1960. In 1966, the General Assembly passed resolution 2145 (XXI) which declared the Mandate terminated and that the Republic of South Africa had no further right to administer South West Africa. In 1971, acting on a request for an Advisory Opinion from the United Nations Security Council, the ICJ ruled that the continued presence of South Africa in Namibia was illegal and that South Africa was under an obligation to withdraw from Namibia immediately. It also ruled that all member states of the United Nations were under an obligation not to recognise as valid any act performed by South Africa on behalf of Namibia. South West Africa became known as Namibia by the UN when the General Assembly changed the territory's name by Resolution 2372 (XXII) of 12 June 1968. SWAPO was recognised as representative of the Namibian people, and gained UN observer status when the territory of South West Africa was already removed from the list of Non-Self-Governing Territories. In 1977, South Africa transferred control of Walvis Bay back to the Cape Province, thereby making it an exclave. The territory became the independent Republic of Namibia on 21 March 1990, although Walvis Bay and the Penguin Islands remained under South African control until 1994. 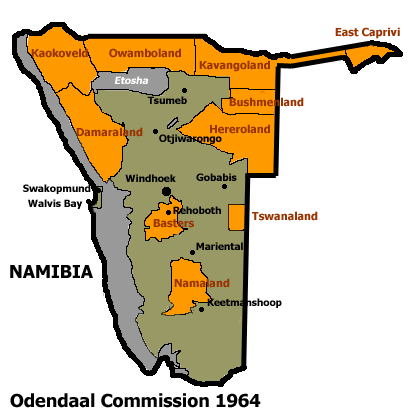