South Carolina () is a state in the Southeastern region of the United States. It is bordered to the north by North Carolina, to the southeast by the Atlantic Ocean, and to the southwest by Georgia across the Savannah River. South Carolina is the 40th most extensive and 23rd most populous U.S. state. In 2019 its GDP was $213.45 billion. South Carolina is composed of 46 counties. The capital is Columbia with a population of 133,273 in 2019; while its largest city is Charleston with a 2019 population of 135,257. The Greenville–Anderson–Mauldin metropolitan area is the largest in the state, with a 2018 population estimate of 906,626. South Carolina was named in honor of King Charles I of England, who first formed the English colony, with ''Carolus'' being Latin for "Charles". South Carolina became the eighth state to ratify the U.S. Constitution on May 23, 1788. It also became the first state to vote in favor of secession from the Union on December 20, 1860. After the American Civil War, it was readmitted into the United States on June 25, 1868.

There is evidence of human activity in the area dating to about 40,000 years ago. At the time Europeans arrived, marking the end of the Pre-Columbian era around 1600, there were many separate Native American tribes, the largest being the Cherokee and the Catawba, with the total population being up to 20,000. Up the rivers of the eastern coastal plain lived about a dozen tribes of Siouan background. Along the Savannah River were the Apalachee, Yuchi, and the Yamasee. Further west were the Cherokee, and along the Catawba River, the Catawba. These tribes were village-dwellers, relying on agriculture as their primary food source. The Cherokee lived in wattle and daub houses made with wood and clay, roofed with wood or thatched grass. About a dozen separate small tribes summered on the coast harvesting oysters and fish, and cultivating corn, peas and beans. Travelling inland as much as mostly by canoe, they wintered on the coastal plain, hunting deer and gathering nuts and fruit. The names of these tribes survive in place names like Edisto Island, Kiawah Island, and the Ashepoo River.

The Spanish were the first Europeans in the area. From June 24 to July 14, 1521, they explored the land around Winyah Bay. On October 8, 1526, they founded San Miguel de Gualdape, near present-day Georgetown, South Carolina. It was the first European settlement in what is now the contiguous United States. Established with five hundred settlers, it was abandoned eight months later by one hundred and fifty survivors. In 1540, Hernando de Soto explored the region and the main town of Cofitachequi, where he captured the queen of the Maskoki (Muscogee) and the Chelaque (Cherokee) who had welcomed him. 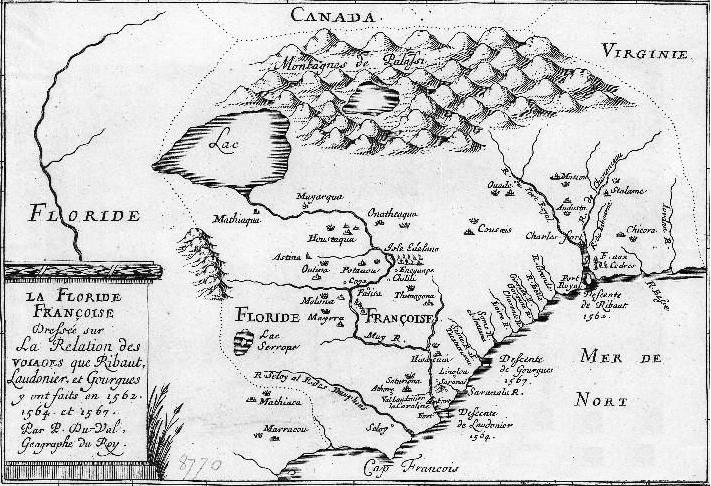 In 1562 French Huguenots established a settlement at what is now the Charlesfort-Santa Elena archaeological site on Parris Island. Many of these settlers preferred a natural life far from civilization and the atrocities of the Wars of Religion. The garrison lacked supplies, however, and the soldiers (as in the France Antarctique) soon ran away. The French returned two years later but settled in present-day Florida rather than South Carolina. 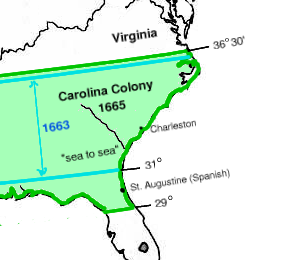 Sixty years later, in 1629, King of England Charles I established the Province of Carolina, an area covering what is now South and North Carolina, Georgia and Tennessee. In 1663, Charles II granted the land to eight Lords Proprietors in return for their financial and political assistance in restoring him to the throne in 1660. Anthony Ashley Cooper, one of the Lord Proprietors, planned the Grand Model for the Province of Carolina and wrote the Fundamental Constitutions of Carolina, which laid the basis for the future colony. His utopia was inspired by John Locke, an English philosopher and physician, widely regarded as one of the most influential of Enlightenment thinkers and commonly known as the "Father of Liberalism". The Carolina slave trade, which included both trading and direct raids by colonists, was the largest among the British colonies in North America.