Sindhi ( ; Sindhi: , ) is an Indo-Aryan language of the historical Sindh region in the western part of the Indian subcontinent, spoken by the Sindhi people. It is the official language of the Pakistani province of Sindh. In India, Sindhi is one of the scheduled languages officially recognized by the central government, though Sindhi is not an official language of any of the states in India. According to the preliminary results of Pakistan's 2017 census, Sindhi is the first language of 30.26 million people, or 14.57% of the country's population. In India, it was the first language of 1.68 million as of the 2011 census.

The Indian Government has legislated Sindhi as a language of option and a medium of study in India, so that students can choose to learn Sindhi. Sindhi is an optional third language in the Indian states of Rajasthan, Gujarat and Madhya Pradesh. Prior to the inception of Pakistan, Sindhi was the national language of Sindh. Pakistan Sindh Assemble has ordered compulsory teaching of Sindhi language in all private schools of Sindh. According to the Sindh Private Educational Institutions Form B (Regulations and Control) 2005 Rules, "All educational institutions are required to teach children the Sindhi language. Sindh Education and Literacy Minister, Syed Sardar Ali Shah and Secretary School Education, Qazi Shahid Pervaiz has ordered to employ Sindhi teachers in all private schools in Sindh, so that this language can be easily and widely taught. Sindhi is taught in all province private schools that follow the Matric system and not the ones that follow the Cambridge system. There are many Sindhi language television channels broadcasting in Pakistan such as Time News, KTN, Sindh TV, Awaz Television Network, Mehran TV and Dharti TV. Besides this, the Indian television network Doordarshan has been asked by the Indian High Court to start a news channel for Sindhi speakers in India.

The name "Sindhi" is derived from ''Sindhu'', the original name of the Indus River. Like other languages of this family, Sindhi has passed through Old Indo-Aryan (Sanskrit) and Middle Indo-Aryan (Pali, secondary Prakrits, and Apabhramsha) stages of growth. 20th century Western scholars such as George Grierson believed that Sindhi descended specifically from the Vrācaḍa dialect of Apabhramsha (described by Markandeya as being spoken in ''Sindhu-deśa'') but later work has shown this to be unlikely. It entered the New Indo-Aryan stage around the 10th century CE. According to Sindhi tradition, the first translation of the Quran into Sindhi was completed in the year 883 CE / 270 AH in Mansura, Sindh. The first extensive Sindhi translation was done by Akhund Azaz Allah Muttalawi (1747–1824 CE / 1160–1240 AH) and first published in Gujarat in 1870. The first to appear in print was by Muhammad Siddiq (Lahore 1867). When Sindh was occupied by British army and was annexed with Bombay, governor of the province Sir George Clerk ordered to make Sindhi the official language in the province in 1848. Sir Bartle Frere, the then commissioner of Sindh, issued orders on August 29, 1857 advising civil servants in Sindh to qualify examination in Sindhi. He also ordered Sindhi to be used in all official communication. Seven-grade education system commonly known as Sindhi-Final was introduced in Sindh. Sindhi Final was made a prerequisite for employment in revenue, police and education departments. In the year 1868, the Bombay Presidency assigned ''Narayan Jagannath Vaidya'' to replace the Abjad used in Sindhi, with the ''Khudabadi script''. The script was decreed a standard script by the Bombay Presidency thus inciting anarchy in the Muslim majority region. A powerful unrest followed, after which Twelve Martial Laws were imposed by the British authorities.

Sindhi has a relatively large inventory of both consonants and vowels compared to other languages. Sindhi has 46 consonant phonemes and 16 vowels. The consonant to vowel ratio is around average for world's languages at 2.8. All plosives, affricates, nasals, the retroflex flap and the lateral approximant /l/ have aspirated or breathy voiced counterparts. The language also features four implosives.

The retroflex consonants are apical postalveolar and do not involve curling back of the tip of the tongue, so they could be transcribed in phonetic transcription. The affricates are laminal post-alveolars with a relatively short release. It is not clear if is similar, or truly palatal. is realized as labiovelar or labiodental in free variation, but is not common, except before a stop.

The vowels are modal length and short . (Note are imprecisely transcribed as in the chart.) Consonants following short vowels are lengthened: 'leaf' vs. 'worn'.

The dialects of Sindhi include Siroli, Vicholi, Lari, Lasi, Kathiawari Kachhi, Thari or Thareli, Macharia, Dukslinu and Muslim Sindhi. The "Siroli or Siraiki" dialect in northern Sindh is distinct from the Saraiki language of South Punjab and has variously been treated either as a dialect of it, or as a dialect of Sindhi. The Sindhi dialects previously known as "Siraiki" are nowadays more commonly referred to as "Siroli".

Written Sindhi is mentioned in the 8th century, when references to a Sindhi version of the Mahabharata appear. However, the earliest attested records in Sindhi are from the 15th century. Before the standardisation of Sindhi orthography, numerous forms of Devanagari and Lunda (Laṇḍā) scripts were used for trading. For literary and religious purposes, a Perso-Arabic script developed by Abul-Hasan as-Sindi and Gurmukhi (a subset of Laṇḍā) were used. Another two scripts, ''Khudabadi'' and ''Shikarpuri'', were reforms of the Landa script. During British rule in the late 19th century, the Perso-Arabic script was decreed standard over Devanagari. Medieval Sindhi devotional literature (1500–1843) comprises Sufi poetry and Advaita Vedanta poetry. Sindhi literature flourished during the modern period (since 1843), although the language and literary style of contemporary Sindhi writings in Pakistan and India were noticeably diverging by the late 20th century; authors from the former country were borrowing extensively from Urdu, while those from the latter were highly influenced by Hindi.

Laṇḍā-based scripts, such as Gurmukhi, Khojki and the Khudabadi script were used historically to write Sindhi.

The Khudabadi alphabet was invented in 1550 CE, and was used alongside other scripts by the Hindu community until the colonial era, where the sole usage of the Arabic script for official purposes was legislated. The script continued to be used in a smaller scale by the trader community until the Partition of India in 1947.

The Gurmukhi script was also used to write Sindhi, mainly in the North of Sindh, and also by Hindu women.

During British rule in India, a variant of the Persian alphabet was adopted for Sindhi in the 19th century. The script is used in Pakistan today. It has a total of 52 letters, augmenting the Persian with digraphs and eighteen new letters () for sounds particular to Sindhi and other Indo-Aryan languages. Some letters that are distinguished in Arabic or Persian are homophones in Sindhi. 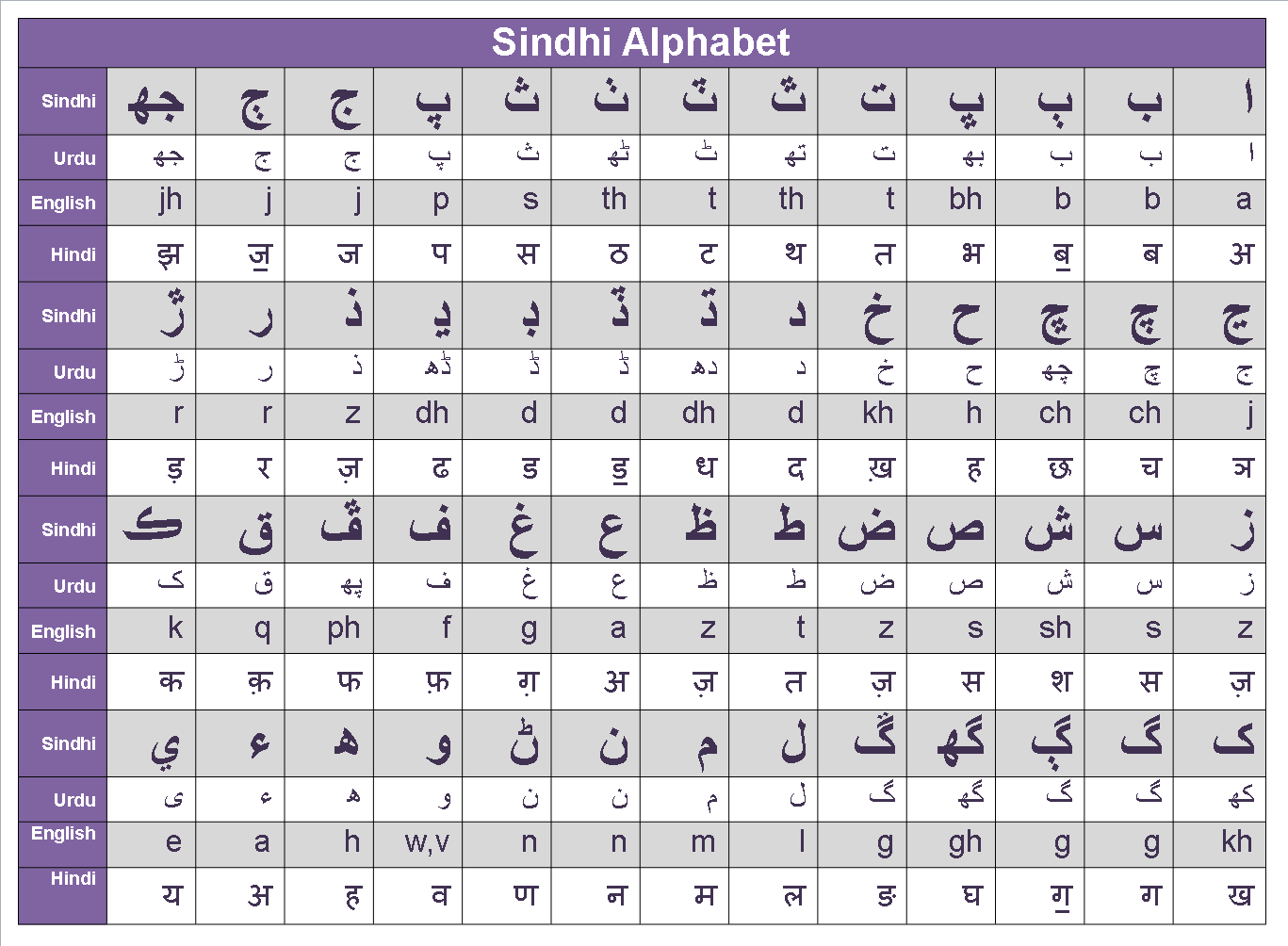 In India, the Devanagari script is also used to write Sindhi. A modern version was introduced by the government of India in 1948; however, it did not gain full acceptance, so both the Sindhi-Arabic and Devanagari scripts are used. In India a person may write a Sindhi language paper for a Civil Services Examination in either scrip

Diacritical bars below the letter are used to mark implosive consonants, and dots called ''nukta'' are used to form other additional consonants.

The Gujarati script is used to write the Kutchi Language in India.

The Sindhi-Roman script or Roman-Sindhi script is the contemporary Sindhi script usually used by the Sindhis during texting messages on their mobile phones.

Sindhi language software such as Sindhi language keyboards have been developed for the Windows OS, Android smartphones. Various other online websites provide Sindhi keyboard such as (Keymanweb.org), M.B Sindhi keyboard by Abdul Razaque & Abdul-Majid Bhurgri. Software has also been developed for the transliteration between the main writing systems.
transliteration website
also exists on the internet that can transliterate between different scripts of Sindhi language (including the newly proposed Latin Script) and th
website's source code
is openly available on GitHub for anyone to view and use anywhere.