Serena Jameka Williams (born September 26, 1981) is an American professional tennis player and former world No. 1 in women's single tennis. She has won 23 Grand Slam singles titles, the most by any player in the Open Era, and the second-most of all time behind Margaret Court (24). The Women's Tennis Association (WTA) ranked her world No. 1 in singles on eight separate occasions between 2002 and 2017. She reached the No. 1 ranking for the first time on July 8, 2002. On her sixth occasion, she held the ranking for 186 consecutive weeks, tying the record set by Steffi Graf. In total, she has been No. 1 for 319 weeks, which ranks third in the Open Era among female players behind Graf and Martina Navratilova. Williams is widely regarded to be one of the greatest tennis players of all time. She holds the most Grand Slam titles in singles, doubles, and mixed doubles combined among active players. Her 39 Grand Slam titles put her joint-third on the all-time list and second in the Open Era: 23 in singles, 14 in women's doubles, and two in mixed doubles. She is the most recent female player to have held all four Grand Slam singles titles simultaneously (2002–03 and 2014–15) and the third player to achieve this twice, after Rod Laver and Graf. She is also the most recent player to have won a Grand Slam title on each surface (hard, clay and grass) in one calendar year (2015). She is also, together with her older sister Venus, the most recent player to have held all four Grand Slam women's doubles titles simultaneously (2009–10). Williams has won a record of 13 Grand Slam singles titles on hard court. Williams holds the Open Era record for most titles won at the Australian Open (7) and shares the Open Era record for most titles won at the US Open with Chris Evert (6). She also holds the records for the most women's singles matches won at majors with 362 matches and most singles majors won since turning 30-years-old (10). Williams has won 14 Grand Slam doubles titles, all with her sister Venus, and the pair are unbeaten in Grand Slam doubles finals. As a team, she and Venus have the third most women's doubles Grand Slam titles, behind the 18 titles of Natasha Zvereva (14 with Gigi Fernández) and the record 20 titles won by Martina Navratilova and Pam Shriver. Williams is also a five-time winner of the WTA Tour Championships in the singles division. She has also won four Olympic gold medals, one in women's singles and three in women's doubles—an all-time record shared with her sister, Venus. The arrival of the Williams sisters has been credited with ushering in a new era of power and athleticism on the women's professional tennis tour. She is ranked at No. 7 in the world by the WTA as of February 22, 2021. Earning almost $29million in prize money and endorsements, Williams was the highest paid female athlete in 2016. She repeated this feat in 2017 when she was the only woman on ''Forbes'' list of the 100 highest paid athletes with $27million in prize money and endorsements. She has won the 'Laureus Sportswoman of the Year' award four times (2003, 2010, 2016, 2018), and in December 2015, she was named Sportsperson of the Year by ''Sports Illustrated'' magazine. In 2019, she was ranked 63rd in ''Forbes'' World's Highest-Paid Athletes list.

Williams was born in Saginaw, Michigan, to Oracene Price and Richard Williams, and is the youngest of Price's five daughters: half-sisters Yetunde, Lyndrea, and Isha Price, and full older sister Venus. She also has at least seven paternal half-siblings. When the children were young, the family moved to Compton, California, where Williams started playing tennis at the age of four. Her father home schooled Serena and her sister, Venus. While he and subsequently her mother have been the official coaches, other mentors who helped her learn the game included Richard Williams, a Compton man who shared her father's name and would go on to found The Venus and Serena Williams Tennis/Tutorial Academy. 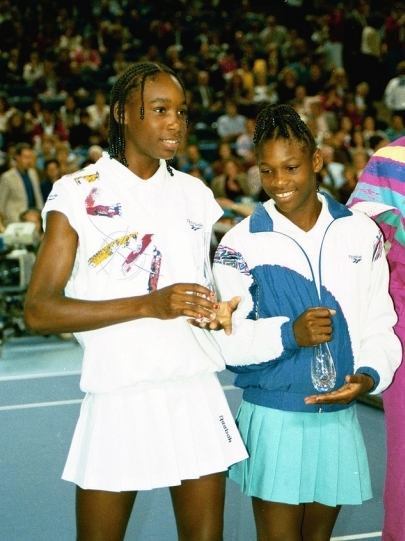 When Williams was nine, she and her family moved from Compton to West Palm Beach, Florida, so that she could attend the tennis academy of Rick Macci; Macci began to provide additional coaching. Macci did not always agree with Williams's father, but respected that "he treated his daughters like kids, allowed them to be little girls". Richard stopped sending his daughters to national junior tennis tournaments when Williams was 10 since he wanted them to go slowly and to focus on school work. Experiences of racism also drove this experience, as Richard Williams had heard white parents talk about the Williams sisters in a derogatory manner during tournaments. At that time, Williams had a 46–3 record on the United States Tennis Association junior tour and was ranked number one among under-10 players in Florida. In 1995, when Williams was in the ninth grade, her father pulled his daughters out of Macci's academy and, from then on, took over all coaching at their home. When asked in 2000 whether having followed the normal path of playing regularly on the junior circuit would have been beneficial, Williams responded: "Everyone does different things. I think for Venus and I, we just attempted a different road, and it worked for us."

Williams is primarily a baseline player, and her game is built around taking immediate control of rallies with her powerful and consistent serve, return of serve, and forceful groundstrokes from both her forehand and backhand swings. Williams's forehand is considered to be among the most powerful shots in the women's game, as is her double-handed backhand. Williams strikes her backhand groundstroke using an open stance, and uses the same open stance for her forehand. Williams's aggressive play, a "high risk" style, is balanced in part by her serve, which most say is the greatest in women's tennis history. She consistently projects great pace and placement with her serves; in the 2013 Australian Open, she had a peak serve speed of which is the third fastest all-time among female players (only Venus's 129mph and Sabine Lisicki's 131mph recorded speeds are faster). What makes her serve even more deadly is her ball placement and her ability to consistently place powerful shots with great accuracy. At the 2012 Championships at Wimbledon, she hit a women's tournament record of 102 aces, which was more than any of the men hit during the two weeks, a rarity given that aces are more common in the men's game. Despite being thought of primarily as a baseline player, Williams is a strong volleyer, choosing to finish points off at the net, possessing a very solid and powerful overhead, and having deft touch at the net. Although many think of Williams as only an offensive player, she also plays a strong defensive game. She has stated that her favorite surface is clay because it gives her extra time to set up her shots. Williams is known for producing exceptional comebacks, particularly on the Grand Slam level. She has won three Grand Slam singles titles after saving match points (the 2003 Australian Open semifinal versus Kim Clijsters, the 2005 Australian Open semifinal versus Maria Sharapova, and the 2009 Wimbledon semifinal versus Elena Dementieva), a feat achieved more often than any other player in history. She also came back from a 3–5 deficit in the third set against Kim Clijsters in the 1999 US Open en route to her first Grand Slam singles title. In the 2012 US Open final against Victoria Azarenka, she was down 3–5 in the third set and found herself two points away from losing the match. Williams then proceeded to win the next 4 games and defeated Azarenka. In the semifinals of the 2015 French Open, Williams was ill and barely able to walk during changeovers, yet beat her opponent, Timea Bacsinszky, 6–0 in the third set. Another improbable win occurred in the third round of the 2015 Wimbledon Championships, when she recovered from two breaks of service in the third set to defeat Great Britain's number-one female player, Heather Watson. Williams has bounced back from a set down to win in 37 Grand Slam matches. In recent years, Williams has shown an ability to serve aces at critical moments. One of these instances was the 2013 French Open final, where in the last game of the match, she fired three aces, including one clocked at 123mph (198km/h) on match point. She repeated the feat similarly against Angelique Kerber in the finals of the 2016 Wimbledon Championships to tie the Open Era record for Grand Slam singles titles. Williams fired three un-returnable serves in her final service game before winning the match and the title with a casual forehand volley on the next point.

Williams's parents wanted their daughter to wait until she was 16 to participate in professional tournaments. In 1995 just after turning 14, Williams planned to make her professional debut as a wild-card entry in the Bank of the West Classic in Oakland, California, but was denied by the WTA due to age-eligibility restrictions of the organization. She subsequently filed an antitrust lawsuit against the women's tour, but withdrew it at the behest of her parents.