Named after Natal Colony Governor John Scott (governor), John Scott, in 1860 it became the second township at the end of Durban, but was initially known as ''Devonport''. Scottburgh then became a very promising port as well as a new attractive location for sugar farms and sugar mills. In about 1850 the town started to attract immigrants especially from the United Kingdom, known as the ''Byrne Settlers''. They came to take advantage of the good harbours, to export their sugar both internally and externally. Scottburgh became an independent municipality in 1964. 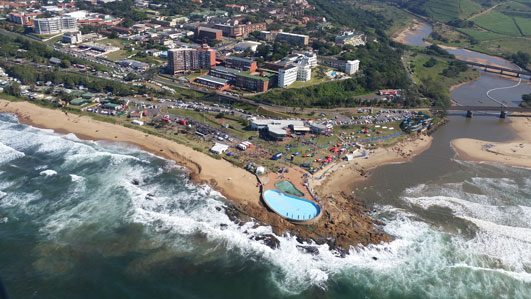 Scottburgh Main beach along with Pennington and Park Rynie have been awarded blue flag status as of the 2014/15 summer season. Scottburgh and Pennington are both very popular for tourists to make their way to the beach. Scottburgh along with the two hotels and many B&Bs is also home to an award-winning caravan park and camping ground. The summer season sees many tourists from the inland flock to the beaches of the South Coast. There are many activities that contribute to Scottburgh being a popular destination such as Umkomaas, Microlighting, Diving, Shark cage diving, Sea rides, Rock and surf fishing, Surfing, Umdoni Park run, Bicycle trails. There are many more activities that can be inquired at the local South Coast tourism office.

Scottburgh is a bay situated on the South Bank of the Mpambanyoni River, a short river that culminates in a lagoon. It is one of the best geographic examples of a bay on the South African coast. Mpambanyoni mouth has fluctuated in surface area and volume dramatically over the years, largely due to the frequent droughts, occasional cyclones, and other extreme weather conditions that can affect KwaZulu-Natal. Scottburgh can be separated into neighbourhoods: Scottburgh Central (north), Scottburgh South, Freeland Park (which is situated on the north side of the Mpambanyoni River). Most notorious of the above-mentioned cyclones was Tropical Storm Domoina, Domoina of 1984 and the floods of 1987, which resulted in widespread flooding and infrastructural damage, including the destruction of the Old Main Road bridge from Umkomaas.

Wildlife found regularly inside the township includes snakes, skinks, geckos, numerous insects, millipedes, bushbuck, mongi, and most famously, large numbers of vervet monkeys. Genet (animal), Genets have been sighted, and there are occasional unverified spottings of civets and similar small felidae, felines and cat-like mammals. Birds are abundant, perhaps the most noticeable being the raucous and much-loved hadeda ibis. The Indian mynah is widespread but regarded as a pest due to its habits of defecating in public restaurants and eating areas and pillaging the nests of native birds. This bird has presented similar problems in other areas in South Africa, Australia and New Zealand. The sardine run is also visible from the shores of Scottburgh and its surroundings most winters. The umdoni and ''Strelitzia'' are the best-known trees specifically associated with Scottburgh and its environs.

Scottburgh is also particularly renowned for its large surfing community. Superior waves are to be found along the coast, especially during the winter months. Popular spots include Green Point, Pennington, Kelso, Scottburgh and Rocky Bay. Many other perfect breaks along this coast can be found. Surfers and bodyboarders from around the world come for surf trips around the south coast, and would visit Scottburgh in particular for its worldwide surfing reputation. However, one appeal of Scottburgh beach is its grass-covered banks leading down to sandy beaches, which have made it a popular holiday resort for holidaymakers for many years. Most Scottburgh residents work for small local businesses or the state sector, while larger industries are located in the nearby towns of Umkomaas, Umzinto, and Sezela. North of the Mpambanyoni lies the suburb of Freeland Park, largely residential but also possessing the Cutty Sark Hotel and a river populated by juvenile and adolescent crocodiles. These crocodiles are also the product of the 1987 cyclone, when infant crocodiles escaped from the nearby Crocworld theme park. South of Scottburgh proper, and separated from it by the Country Club, Golf Course, and a considerable expanse of bush, is Scottburgh South, and a few kilometres inland lies the sugarcane farming hamlet of Renishaw, well known for its chapel.