Scott Eric Podsednik (; born March 18, 1976) is an American former professional baseball outfielder in Major League Baseball (MLB). Best known for his baserunning, Podsednik led the major leagues in stolen bases in with 70, in times caught stealing in with 23, and the American League in times caught stealing in with 19. He won the World Series with the 2005 Chicago White Sox, hitting a walk-off home run in Game 2.

Podsednik was drafted out of West High School in the 3rd round, 85th overall, in the 1994 Major League Baseball draft by the Texas Rangers. He began his professional career with the Gulf Coast Rangers in 1994. The Rangers traded him (along with Wilson Heredia) to the Florida Marlins for pitcher Bobby Witt on October 8, 1995. He spent the next two seasons playing for the Marlins class-A affiliates. On December 15, 1997 he returned to the Rangers in the minor league portion of the Rule 5 draft. He was promoted to the Double-A Tulsa Drillers in 1998. He remained with Tulsa through the 2000 season when he was granted free agency. He signed with the Seattle Mariners as a minor league free agent and was placed at the Triple-A level with the Tacoma Rainiers. Podsednik spent nine years in the minors with significant time lost to injury.

He made his Major League debut on July 6, 2001 against the Los Angeles Dodgers, pinch-running for Ichiro Suzuki. In his first career major league at-bat, against the Arizona Diamondbacks on July 15, he hit a bases loaded triple. In , Podsednik played mostly at Triple-A Tacoma, but was activated for 14 Major League games, hitting his first major-league home run during that time.

After the 2002 season, Podsednik was acquired by the Milwaukee Brewers organization from Seattle for $20,000. Podsednik rebounded with a fine rookie season in Milwaukee, compiling a .314 batting average, 43 stolen bases, 100 runs scored, 175 hits, 29 doubles, eight triples, nine home runs, 58 runs batted in, 56 walks and a .379 on-base percentage for the Brewers. While only inserted permanently into the starting lineup in mid-May, Podsednik still finished second to the Florida Marlins' Dontrelle Willis in the official Rookie of the Year balloting. The 2004 season saw Podsednik lead the league with 70 stolen bases. 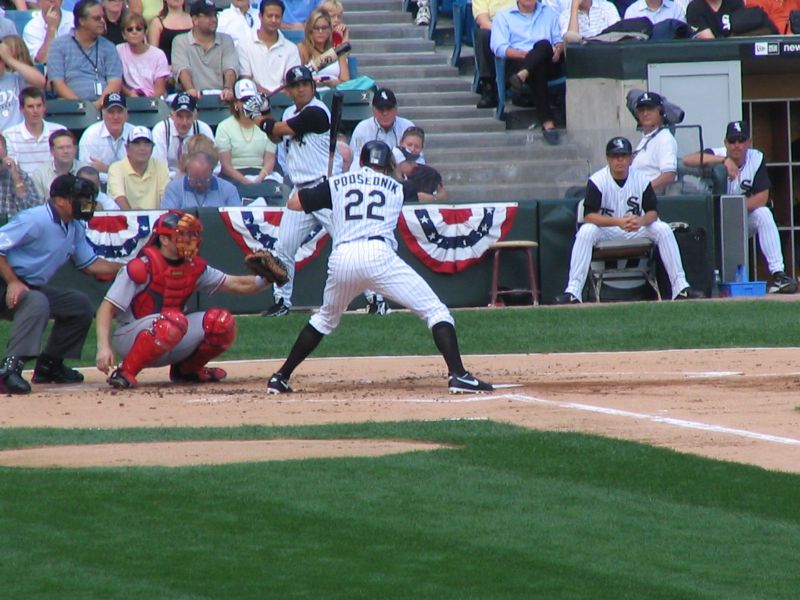 In December 2004, Podsednik was dealt to the Chicago White Sox (along with Travis Hinton and Luis Vizcaíno) for Carlos Lee. After leading all of the Major Leagues in steals the first half of 2005 he was selected to his first All-Star game via the MLB's All-Star Final Vote. He saw only defensive time in the All-Star game in Detroit that year and did not get a chance to bat. Podsednik ended 2005 with 59 steals (second in the American League) and 23 times caught stealing (leading the major leagues) despite missing several games due to injury. In the post-season he started all 12 games and hit .286 while stealing 6 bases on 9 attempts. In Game 2 of the 2005 World Series, while facing Brad Lidge in the bottom of the 9th inning, with the White Sox and Astros tied at 6, Podsednik hit a 2-1 fastball into the right field stands for a walk-off home run, only the 14th in World Series history. The feat was all the more improbable because Podsednik did not hit any home runs during the regular season in 2005, and had only hit 1 in the ALDS against the Red Sox. Two days later in Game 3, he set a World Series record of eight at-bats in a single World Series Game. In 2006, Podsednik once again led the league with 19 times caught stealing. On November 20, 2007, Podsednik was designated for assignment and released on November 28, 2007.

On February 5, , he signed a minor league contract with an invitation to spring training with the Colorado Rockies. He appeared in 93 games for the Rockies and hit .253. A free agent at the end of the season, he re-signed with the Rockies on January 14, 2009. But he was released before the 2009 season started.

On April 14, 2009, Podsednik agreed to return to the White Sox on a minor-league deal, assigning him to the AAA Charlotte Knights. On April 30, the White Sox called Podsednik from Charlotte to play on White Sox 25-man roster. Podsednik was given plenty of playing time upon his recall, with injuries to Sox center fielders DeWayne Wise and Brian Anderson, as well as left fielder Carlos Quentin. He hit .304 in his return to the South Side.

On January 8, 2010, Podsednik signed a contract with the Kansas City Royals. He hit .309 in 94 games with the Royals, including stealing 30 bases.

On July 28, 2010, the Royals traded Podsednik to the Los Angeles Dodgers in return for two minor league players, catcher Lucas May and pitcher Elisaul Pimentel. He appeared in 39 games for the Dodgers, with a .262 batting average and 5 stolen bases. He was shut down for the season in early September because of a foot injury. After the season, he declined his half of a mutual option and became a free agent.

On February 16, 2011, Podsednik signed a minor league contract with an invitation to spring training. He played for the Las Vegas 51s in the Pacific Coast League as a member of the Toronto Blue Jays organization. He was released on May 11.

Podsednik signed a minor league contract with the Philadelphia Phillies on May 22, 2011. He was assigned to their Triple-A affiliate, the Lehigh Valley IronPigs, but was limited to playing in just 14 games due to injuries. The Phillies signed Podsednik to another minor league deal on November 30, 2011. Even after an impressive Spring training, Podsednik was again sent to Triple-A Lehigh Valley.

On May 11, 2012, Podsednik was traded to the Boston Red Sox for cash considerations. Podsednik was promoted to Boston May 22 to help with an outfield that saw seven players on the disabled list. On May 22, 2012 he made his debut, pinch hitting for Marlon Byrd in the seventh inning of a game against the Baltimore Orioles. On the following day also against the Baltimore Orioles, Podsednik made his first start in right field and hit a home run. On July 31, 2012, Podsednik was traded to the Arizona Diamondbacks, along with RHP Matt Albers, for LHP Craig Breslow. He was released the next day after refusing a Triple-A assignment. On August 9, 2012, Podsednik re-signed with the Red Sox on a major league contract. He retired after the 2012 season.

He was married to ''Playboy'' Playmate Lisa Dergan, but divorced in the spring of 2017. The two have a boy (7) and a girl (9) and lived in Colleyville, Texas. His sister Shana is married to former Texas Rangers baseball player, Kevin Mench.