Ryan John Seacrest (born December 24, 1974) is an American radio personality, producer, and co-host of ''Live with Kelly and Ryan''. He hosts programs on multiple media platforms as well, including ''American Idol'', ''American Top 40'', and ''On Air with Ryan Seacrest''. In 2006, Seacrest became co-host and executive producer of ''Dick Clark's New Year's Rockin' Eve''. He remained host and executive producer of the annual show broadcast from Times Square in New York City following Dick Clark's death in 2012. Seacrest began co-hosting ''Live with Kelly and Ryan'' on a permanent basis May 1, 2017. Seacrest received Emmy Award nominations for ''American Idol'' from 2004 to 2013, and again in 2016. He won an Emmy for producing ''Jamie Oliver's Food Revolution'' in 2010 and was nominated again in 2012. In 2018, Seacrest received nominations for ''Live with Kelly and Ryan'' in Outstanding Talk Show Entertainment as well as Outstanding Entertainment Talk Show Host.

Ryan Seacrest was born on December 24, 1974, in Atlanta, Georgia, the son of Constance Marie (née Zullinger), a homemaker, and Gary Lee Seacrest, a real estate lawyer. His father served as a Lieutenant in the US Army and his grandfather, Henry Gene Skeen, was a Major General in the US Army. His mother told the ''Atlanta Journal-Constitution'', "Instead of playing with G.I. Joes or Cowboys and Indians, Ryan would always have a little microphone and do shows in the house." At age 14, he attended Dunwoody High School. At age 16, while still attending high school, Seacrest won an internship at 94.1 WSTR (FM), in Atlanta, with Tom Sullivan, who trained him in the many aspects of radio. When a regular DJ called in sick, Sullivan put him on the air for the first show of his broadcasting career. Seacrest was given the weekend overnight shift at WSTR. Seacrest continued to work on air at WSTR until graduating from Dunwoody High in 1992. Seacrest went on to study journalism at the University of Georgia in fall 1992. He continued his radio show at a local Athens station. Seacrest left the university at age 19 and moved to Hollywood to pursue his broadcasting career. In May 2016, Seacrest was awarded an honorary Doctor of Humane Letters degree from the University of Georgia and gave the commencement speech at the graduation ceremony.

In 1993, Seacrest hosted the first season of ESPN's ''Radical Outdoor Challenge''. He also hosted three kids' game shows, ''Gladiators 2000'' from 1994 to 1996 (a spinoff of the television show, ''American Gladiators''), ''Wild Animal Games'' in 1995, and ''Click'' in 1997. Seacrest appeared as the host of the fictional game show ''Lover's Lane'' on ''Beverly Hills, 90210'' in "The Final Proof". In the fall and winter of 2000, Seacrest was the host of The ''NBC Saturday Night Movie''. During commercial breaks, he offered trivia on the film and a chance to win prizes by answering online on NBCi. In 2001, he hosted a reality television program, ''Ultimate Revenge'', where elaborate practical jokes were played on family and friends instigated by their own relatives and friends. It was shown on TNN from 2001 to 2003.

In 2002, Seacrest accepted the position as co-host of a new Fox reality television series ''American Idol'' with comedian Brian Dunkleman. The following year, he became the sole host. When the show increased in popularity, seen by some 26 million viewers weekly, Seacrest became recognizable around the world. In 2003, Seacrest hosted the spin-off show, ''American Juniors.'' In July 2009, Seacrest inked a deal with CKX for $45 million to continue to host ''American Idol,'' making him the highest paid reality television host at that time. In April 2012, he signed a two-year, $30 million deal to stay on as host of ''American Idol''. In May 2014, ''Deadline Hollywood'' reported that Seacrest had signed a one-year deal with the option of another year. He remained host of the series until the end of its run in April 2016. The following May, it was announced that ABC had won a multi-network bidding war for the rights to the show. On July 20, 2017, Seacrest announced on ''Live with Kelly & Ryan'' that he would be the host of an ''Idol'' reboot. His initial multi-year deal was reported to be worth over $10 million.

In January 2006, US cable channel E! announced a three-year, $21 million deal for Seacrest to host various programs, including ''E! News'' and its red carpet awards show coverages. In April 2012, Seacrest signed a deal with NBCUniversal expanding his on-air role beyond E! to NBC. He contributed to the ''Today Show,'' Olympics coverage, entertainment programming, as well as news and other special events. Seacrest will remain managing editor of ''E! News'' and host and produce its red carpet awards show coverage. In September 2012, Seacrest left ''E! News'' and was replaced by Terrence J. Seacrest was an NBC correspondent for the 2012 London Olympic Games and co-hosted the closing ceremony with Bob Costas and Al Michaels. In 2016, Seacrest hosted NBC's live late-night coverage for the Rio Olympic Games.

''Live with Kelly and Ryan''

After a year-long search, on May 1, 2017, it was announced that Seacrest would join Kelly Ripa as host of ''Live with Kelly and Ryan'' as her new permanent co-host and executive producer. Seacrest succeeded Michael Strahan, and started his duties on the day of the announcement. By December 2017, the show was averaging over 3 million viewers.

In 2013, Seacrest hosted ''The Million Second Quiz'', an interactive game show on NBC. Seacrest hosted ''Knock Knock Live'' in 2015, which premiered on Fox. The show featured celebrities arriving at the door of ordinary people who've done something special and giving them a prize. However, the show was cancelled after two episodes.

In January 2004, Seacrest became the new host of the radio program ''American Top 40,'' a syndicated weekly countdown show, created and formerly hosted by Casey Kasem. The show was syndicated by Premiere Radio Networks. In February 2004, Seacrest became host of Los Angeles radio station KIIS-FM's morning show, replacing long-time host Rick Dees. The show, ''On Air With Ryan Seacrest,'' since 2017 Seacrest has been broadcasting from a studio at the facilities of WABC-TV in New York City, where ''Live with Kelly and Ryan'' is produced. In 2018, Seacrest was inducted into the Library of American Broadcasting Foundation's 16th Annual Giants of Broadcasting & Electronic Arts. 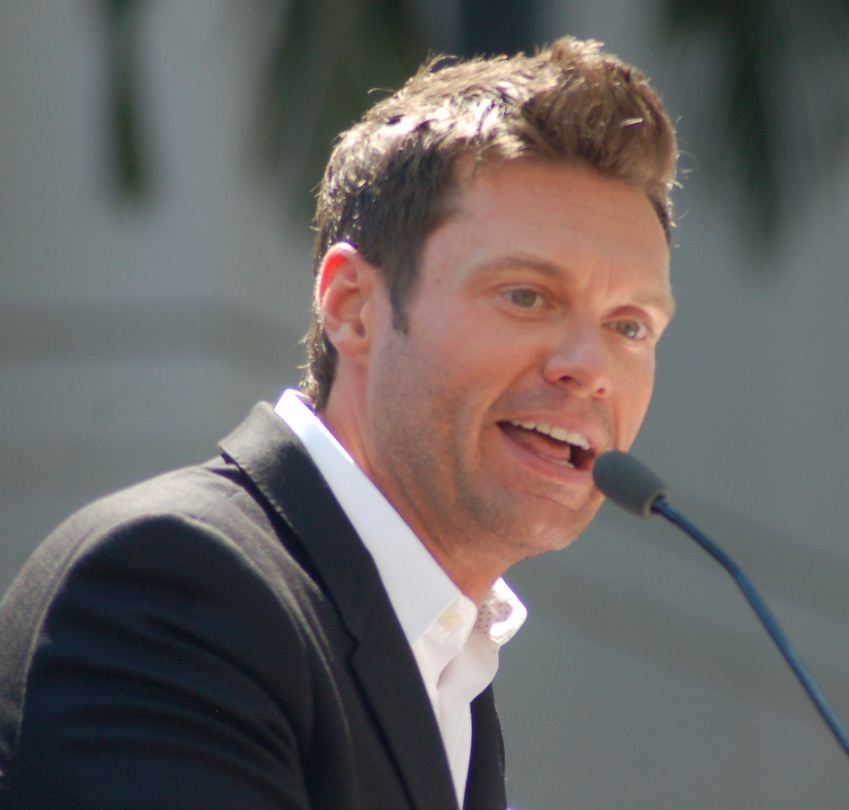 Seacrest's three-year hosting deal with E! included executive producing credits on various programs, including ''E! News'' and its red carpet awards show coverages. That same year, Seacrest launched Ryan Seacrest Productions (RSP); in August 2008, Seacrest named his longtime William Morris Agent, Adam Sher, as CEO. Comcast had first-look rights for all RSP shows through January 2012. Clear Channel acquired a minority stake in RSP in early 2012, but the company no longer has a first look deal with any network. Seacrest remains managing editor of ''E! News'' and executive produces its red carpet awards show coverage but no longer hosts (since January 2012) ''E! News'' on a daily basis. An Associated Press profile portrayed Seacrest as using both the deal with E! and ''Dick Clark's New Year's Rockin' Eve'' as springboards to a long-lasting career in television production and ownership. Seacrest produces the hit series ''Keeping Up with the Kardashians'', the highest-rated show on the E! network, and the spin-offs ''Khloe and Lamar,'' ''Kourtney and Kim Take New York'' and ''Kourtney and Khloe Take Miami.'' RSP also produced the Emmy Award-winning ABC reality series ''Jamie Oliver's Food Revolution.'' RSP also produced two new reality series in 2012 including ''Melissa and Tye,'' which aired on CMT and ''Shahs of Sunset'' for Bravo. Bravo announced a second season of ''Shahs of Sunset'' on April 18, 2012. RSP's new show ''Married to Jonas'' premiered on August 19, 2012 on E! and was renewed for a second season. On January 31, 2012, Thomas H. Lee Partners and Bain Capital announced they would invest up to $300M in Ryan Seacrest Media. A consortium headed by Seacrest (with partners AEG and CAA) agreed to rebrand Mark Cuban's HDNet television network as AXS TV. In 2017, Seacrest signed a multi-year overall deal between Ryan Seacrest Productions and ABC Studios in which the company's scripted division would develop scripted projects for ABC Studios exclusively. In 2018, Seacrest joined the Paley Center for Media's Board of Trustees.

Seacrest was a principal investor in the Typo keyboard, which aimed at cloning the Blackberry physical keyboard for use with iPhone devices that launched in 2014. The Typo keyboard was discontinued in a 2015 patent settlement with Blackberry Ltd. He is also an investor and partner at Pathwater, a brand of purified water offered in a refillable aluminum bottle.

Seacrest worked with Burberry's Christopher Bailey who designed Seacrest's suits for red carpet events as well as New Year's Eve since 2009 and ''American Idol'' starting in 2010. Seacrest wore close-fitting suits and decided to make something similar for a wider audience at an "accessible" price point. With Bailey as his mentor, Seacrest developed his own collection, Ryan Seacrest Distinction, which launched in 2014. He formed an exclusive retail partnership with Macy's to sell the brand Distinction, consisting of suit separates, sports coats and evening wear manufactured by Peerless Clothing International. The line also includes accessories such as ties, pocket squares, belts, cufflinks and jewelry, which are manufactured by Randa Accessories. Seacrest works with Itochu for the production of dress shirts, as well as a sportswear collection released in September 2017. Seacrest partnered with dermatologist Harold Lancer to produce the men's skincare line Polished. The line has five items, which are designed for easy use. Seacrest announced the line in August 2017 on ''The Tonight Show Starring Jimmy Fallon''.

Seacrest had a two-year on-and-off relationship with model Sara Jean Underwood, which was revealed on ''The Howard Stern Show'' in 2009. In April 2010, Seacrest began dating Julianne Hough, a professional dancer, actress, and singer known for participating in ''Dancing with the Stars.'' On March 15, 2013, it was announced that their relationship had ended. They were dating for over two years before the split. On May 14, 2016, he returned to the University of Georgia to give advice to alumni and received an honorary Doctor of Humane Letters degree. Seacrest began a relationship with model Shayna Taylor in 2017. In the summer of 2020, they announced they were no longer together. On November 17, 2017, it was reported that Seacrest was under investigation for sexual harassment allegations by a former E! wardrobe stylist. Seacrest denied the allegations, and also said that "This person who has accused me of horrible things offered, on multiple occasions, to withdraw her claims if I paid her millions of dollars. I refused." On February 1, 2018, the Associated Press reported that the E! channel's investigation into the claims had closed and that there was insufficient evidence to support the claims.