Robert Allan Caro (born October 30, 1935) is an American journalist and author known for his biographies of United States political figures Robert Moses and Lyndon B. Johnson. After working for many years as a reporter, Caro wrote ''The Power Broker'' (1974), a biography of New York urban planner Robert Moses, which was chosen by the Modern Library as one of the hundred greatest nonfiction books of the twentieth century. He has since written four of a planned five volumes of ''The Years of Lyndon Johnson'' (1982, 1990, 2002, 2012), a biography of the former president. For his biographies, he has won two Pulitzer Prizes in Biography, two National Book Awards (including one for Lifetime Achievement), the Francis Parkman Prize (awarded by the Society of American Historians to the book that "best exemplifies the union of the historian and the artist"), three National Book Critics Circle Awards, the Mencken Award for Best Book, the Carr P. Collins Award from the Texas Institute of Letters, the D.B. Hardeman Prize, and a Gold Medal in Biography from the American Academy of Arts and Letters. In 2010 President Barack Obama awarded Caro the National Humanities Medal. Due to Caro's reputation for exhaustive research and detail, he is sometimes invoked by reviewers of other writers who are called "Caro-esque" for their own extensive research.

Caro was born in New York City, the son of Celia (née Mendelow), also born in New York, and Benjamin Caro, born in Warsaw, Poland. He grew up on Central Park West at 94th Street. His father, a businessman, spoke Yiddish as well as English, but he didn't speak either very often. He was 'very silent,' Caro said, and became more so after Caro's mother died, after a long illness, when Robert was 12. It was his mother's deathbed wish that he should go to the Horace Mann School, an exclusive private school in the Riverdale section of The Bronx. As a student there, Caro translated an edition of his school newspaper into Russian and mailed 10,000 copies to students in the USSR. Graduated in 1953, he went on to Princeton University, where he majored in English. He became managing editor of ''The Daily Princetonian'', second to Johnny Apple, later a prominent editor at ''The New York Times''. His writings, both in class and out, had been lengthy since his years at Horace Mann. A short story he wrote for ''The Princeton Tiger'', the school's humor magazine, took up almost an entire issue. His 235-page long senior thesis on existentialism in Hemingway, titled "Heading Out: A Study of the Development of Ernest Hemingway's Thought", was so long, Caro claims, that the university's English department subsequently established a maximum length for senior theses by its students. He graduated ''cum laude'' in 1957. According to a 2012 ''The New York Times Magazine'' profile, "Caro said he now thinks that Princeton, which he chose because of its parties, was one of his mistakes, and that he should have gone to Harvard. Princeton in the mid-1950s was hardly known for being hospitable towards the Jewish community, and though Caro says he did not personally suffer from anti-Semitism, he saw plenty of students who did." He had a sports column in the ''Princetonian'' and also wrote for the ''Princeton Tiger'' humor magazine. Caro began his professional career as a reporter with the ''New Brunswick Daily Home News'' (now merged into the ''Home News Tribune'') in New Jersey. He took a brief leave to work as a publicist for the Middlesex County Democratic Party. He left politics after an incident where he was accompanying the party chair to polling places on election day. A police officer reported to the party chair that some African Americans Caro saw being loaded into a police van, under arrest, were poll watchers who "had been giving them some trouble." Caro left politics right there. "I still think about it," he recalled in the 2012 ''Times Magazine'' profile. "It wasn't the roughness of the police that made such an impression. It was the—meekness isn't the right word—the acceptance of those people of what was happening." After briefly enrolling in the English doctoral program at Rutgers University (where he served as a teaching assistant), he went on to six years as an investigative reporter with the Long Island newspaper ''Newsday''. One of the articles he wrote was a long series about why a proposed bridge across Long Island Sound from Rye to Oyster Bay, championed by Robert Moses, would have been inadvisable, requiring piers so large it would disrupt tidal flows in the sound, among other problems. Caro believed that his work had influenced even the state's powerful governor Nelson Rockefeller to reconsider the idea, until he saw the state's Assembly vote overwhelmingly to pass a preliminary measure for the bridge. "That was one of the transformational moments of my life," Caro said years later. It led him to think about Moses for the first time. "I got in the car and drove home to Long Island, and I kept thinking to myself: 'Everything you've been doing is baloney. You've been writing under the belief that power in a democracy comes from the ballot box. But here's a guy who has never been elected to anything, who has enough power to turn the entire state around, and you don't have the slightest idea how he got it.'" Caro gave a speech to introduce Senator Ted Kennedy at the 2004 Democratic National Convention.

Caro spent the academic year of 1965–1966 as a Nieman Fellow at Harvard University. During a class on urban planning and land use, the experience of watching Moses returned to him. 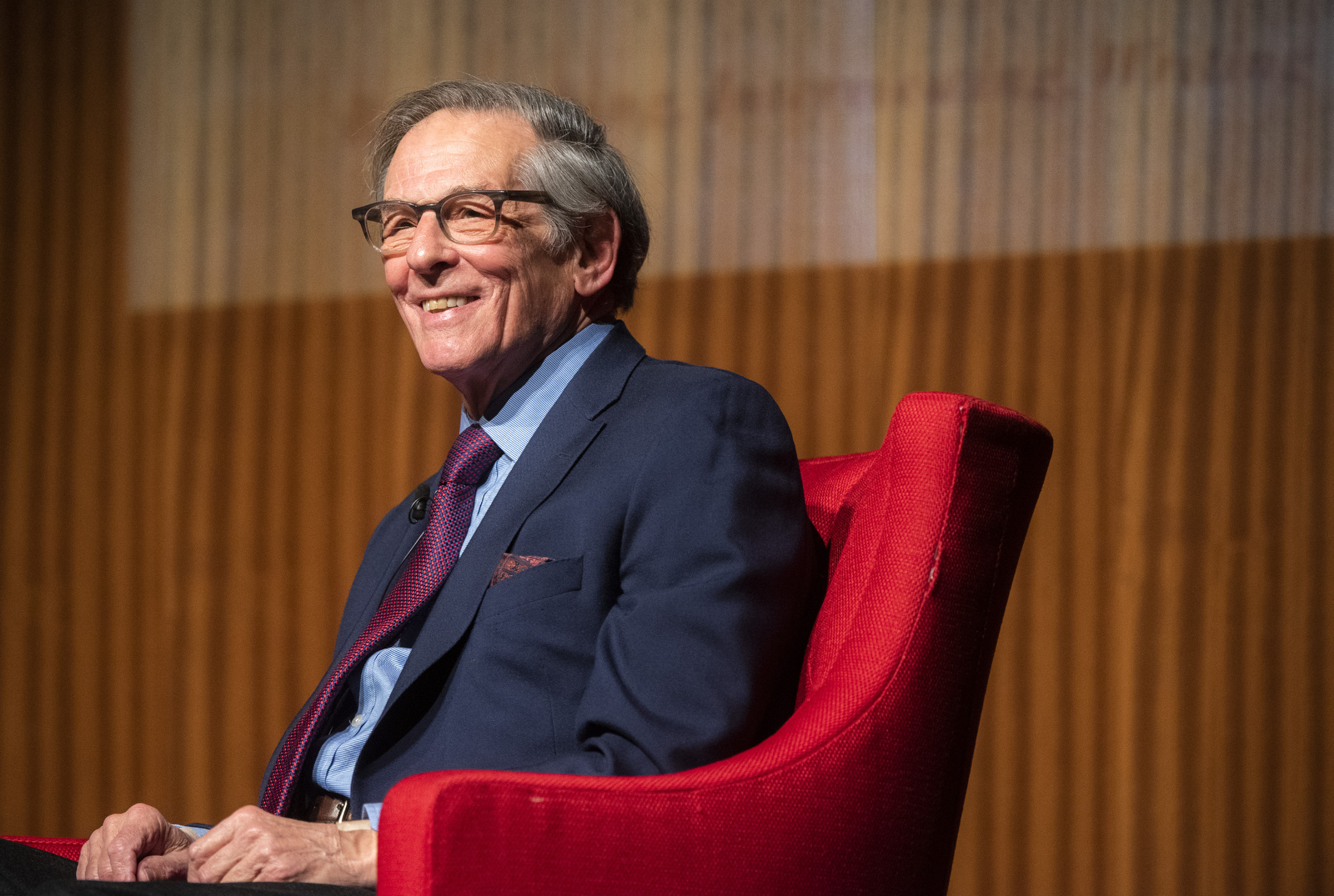 To do so, Caro began work on a biography of Moses, ''The Power Broker: Robert Moses and the Fall of New York'', also a study of Caro's favorite theme: the acquisition and use of power. He expected it would take nine months to complete, but instead it took him until 1974. The work was based on extensive research and 522 interviews, including seven interviews with Moses himself, several with Michael Madigan (who worked for Moses for 35 years); and numerous interviews with Sidney Shapiro (Moses's general manager for forty years); as well as interviews with men who worked for and knew Moses's mentor, New York Governor Al Smith. During the 1967–1968 academic year, Caro worked on the book as a Carnegie Fellow at the Columbia University Graduate School of Journalism. His wife, Ina, functioned as his research assistant. Her master's thesis on the Verrazzano-Narrows Bridge stemmed from this work. At one point she sold the family home and took a teaching job so Robert would be financially able to finish the book. ''The Power Broker'' is widely viewed as a seminal work because it combined painstaking historical research with a smoothly flowing narrative writing style. The success of this approach was evident in his chapter on the construction of the Cross-Bronx Expressway, where Caro reported the controversy from all perspectives, including that of neighborhood residents. The result was a work of powerful literary as well as academic interest. Upon its publication, Moses responded to the biography in a 23-page statement.

''The Years of Lyndon Johnson''

Following ''The Power Broker'', Caro turned his attention to President Lyndon B. Johnson. Caro retraced Johnson's life by temporarily moving to rural Texas and Washington, D.C., in order to better understand Johnson's upbringing and to interview anyone who had known Johnson. The work, entitled ''The Years of Lyndon Johnson'', was originally intended as a trilogy, but is projected to encompass five volumes: # ''The Path to Power'' (1982) covers Johnson's life up to his failed 1941 campaign for the United States Senate. # ''Means of Ascent'' (1990) commences in the aftermath of that defeat and continues through his election to that office in 1948. # ''Master of the Senate'' (2002) chronicles Johnson's rapid ascent and rule as Senate Majority Leader. # ''The Passage of Power'' (2012) details the 1960 election, LBJ's life as vice president, the JFK assassination and his first days as president. # One as-of-yet unpublished final volume. In November 2011, Caro announced that the full project had expanded to five volumes with the fifth requiring another two to three years to write. It will cover Johnson and Vietnam, the Great Society and civil rights era, his decision not to run in 1968, and eventual retirement. As of January 2020, Caro had completed 600 typed manuscript pages and was currently working on a section relating to the passage of Medicare in 1965. He intends to embark on a research trip to Vietnam in the near future. In an interview with ''The New York Review of Books'' in January 2018, Caro indicated he did not know when the book would be finished, mentioning anywhere from two to ten years. Caro's books portray Johnson as a complex and contradictory character: at the same time a scheming opportunist and visionary progressive. Caro argues, for example, that Johnson's victory in the 1948 runoff for the Democratic nomination for the U.S. Senate was only achieved through extensive fraud and ballot box stuffing, although this is set in the practices of the time and in the context of Johnson's previous defeat in his 1941 race for the Senate, the victim of exactly similar chicanery. Caro also highlighted some of Johnson's campaign contributions, such as those from the Texas construction firm Brown and Root; in 1962 the company was acquired by another Texas firm, Halliburton, which became a major contractor in the Vietnam War. In addition, Caro argued that Johnson was awarded the Silver Star in World War II for political as well as military reasons, and that he later lied to journalists and the public about the circumstances for which it was awarded. Caro's portrayal of Johnson also notes his struggles on behalf of progressive causes such as the Voting Rights Act, and his consummate skill in getting this enacted in spite of intense opposition from Southern Democrats. Among sources close to the late president, Johnson's widow Lady Bird Johnson "spoke to aroseveral times and then abruptly stopped without giving a reason, and Bill Moyers, Johnson's press secretary, has never consented to be interviewed, but most of Johnson's closest friends, including John Connally and George Christian, Johnson's last press secretary, who spoke to Caro practically on his deathbed, have gone on the record".

Caro's books have been published by Alfred A. Knopf, first under editor in chief Robert Gottlieb and then by Sonny Mehta, "who took over the Johnson project – enthusiastically – after Gottlieb's departure in 1987." Gottlieb, five years Caro's senior, suggested the Johnson project to Caro in 1974 in preference to the planned follow-up to the Moses volume, a biography of Fiorello LaGuardia that was then abandoned. The ex-President had recently died and Caro had already decided, before meeting with Gottlieb on the subject, to undertake the Texan's biography; he "wanted to write about power". Gottlieb has continued as editor of Caro's books since leaving Knopf and excerpted Volume 2 of the Johnson biography at ''The New Yorker'' when he was editor in chief there.

Caro has expressed hope of writing a "full-scale memoir" after completing ''The Years of Lyndon Johnson''. His 2019 book ''Working'' has been described as a "semi-memoir".