Click Here for Items Related To - Religiosity and education


The relationship between the level of religiosity and the level of education has been studied since the second half of the 20th century. The parameters of the two components are diverse: the "level of religiosity" remains a concept which is difficult to differentiate scientifically, while the "level of education" is easier to compile, such as official data on this topic, because data on education is publicly accessible in many countries. Different studies lead to contrasting conclusions regarding the relationship, depending on whether "religiosity" is measured by religious practices (attendance at places of worship, for example) or specific religious beliefs (belief in miracles, for example), with notable differences between nations. For example, one international study states that in some Western nations the intensity of beliefs decreases with education, but attendance and religious practice increases. Other studies indicate that the religious have higher education than the non-religious. Other studies find that the positive correlation with low or non religiosity and education has been reversed in the past few decades. In terms of university professors, one study concluded that in the US, the majority of professors, even at "elite" universities, were religious.

A Pew Center study about religion and education around the world in 2016, found that Jews are most educated religious group around in the world with an average of 13.4 years of schooling; Jews also have the highest number of post-secondary degrees per capita (61%). Based on the study data, Muslims and Hindus have the lowest average levels of education, with an average of 5.6 years of schooling for both. About 36% of the world Muslim population and 41% of the world Hindu population have no formal schooling, Muslims and Hindus have the lowest average levels of higher education than any other major religious group, with only 8% and 10% respectively have graduate and post-graduate degrees. Christians ranked as the second most educated religious group around in the world with an average of 9.3 years of schooling. Christians were found to have the second highest number of graduate and post-graduate degrees per capita while in absolute numbers ranked in the first place (220 million). According to the study, Christians in North America, Europe, Middle East, North Africa and Asia-Pacific regions are highly educated since many of the world universities were built by the historic Christian churches, in addition to the historical evidence that "Christian monks built libraries and, in the days before printing presses, preserved important earlier writings produced in Latin, Greek and Arabic". According to the same study, Christians have a significant amount of gender equality in educational attainment, and the study suggests that one of the reasons is the encouragement of the Protestant Reformers in promoting the education of women, which led to the eradication of illiteracy among females in Protestant communities. The religiously unaffiliated—which includes atheists, agnostics and those who describe their religion as “nothing in particular”—ranked as the third most educated religious group with an average of 8.8 years of schooling, and around 16% of unaffiliated have graduate and post-graduate degrees. Buddhists have an average of 7.9 years of schooling, and around 12% of Buddhists have graduate and post-graduate degrees. According to the same study "there is a large and pervasive gap in educational attainment between Muslims and Christians in sub-Saharan Africa" as Muslim adults in this region are far less educated than their Christian counterparts, with scholars suggesting that this gap is due to the educational facilities that were created by Christian missionaries during the colonial era for fellow believers. According to a 2015 global survey by Gallup International, the most religious had lower levels of education, however, religious people in general were a majority in all educational levels. An EU survey finds a positive correlation between leaving school early and believing in a God. In one analysis of World Values Survey data by Edward Glaeser and Bruce Sacerdote noted that in 65 former socialist countries there is a negative relationship between years of education and belief in God, with similar negative correlations for other religious beliefs while, in contrast, there were strong positive correlations between years of education and belief in God in many developed countries such as England, France and the US. They concluded that "these cross-country differences in the education-belief relationship can be explained by political factors (such as communism) which lead some countries to use state controlled education to discredit religion". The study also concludes that, in the United States and other developed nations, "education raises religious attendance at individual level," while "at the same time, there is a strong negative connection between attendance and education across religious groups within the U.S. and elsewhere." The authors suggest that "this puzzle is explained if education both increases the returns to social connection and reduces the extent of religious belief," causing more educated individuals to sort into less fervent denominations. Statistical analysis of Nobel prizes awarded between 1901 and 2000 reveals that 65.4% of Nobel laureates were Christians, over 20% were Jewish, and 10.5% were atheists, agnostics, or freethinkers. According to a study that was done by University of Nebraska–Lincoln in 1998, 60% of Nobel prize laureates in physics from 1901 to 1990 had a Christian background. Since 1901-2013, 22% of all Nobel prizes have been awarded to Jews.

A survey conducted by the ''Times of India'' revealed that 22% of IIT Bombay graduates do not believe in the existence of God, while another 30% do not know.

In Ireland, the non-religious have a greater level of education than the general population.

In 1980, a study was conducted in Spain that showed that many educated people were Catholic.

According to the General Social Survey, which has collected data on Americans since 1972, people who are educated often are more religious by various measures. For instance, as of 2010 sociologist Philip Schwadel found that, with each additional year of education, the likelihood of attending religious services increased 15%, the likelihood of reading the Bible at least occasionally increased by 9%. The likelihood of switching to a mainline Protestant denomination increased by 13%. Schwadel said, “With more years of education, you aren’t relatively more likely to say, ‘I don’t believe in God. But you are relatively more likely to say, ‘I believe in a higher power.’” 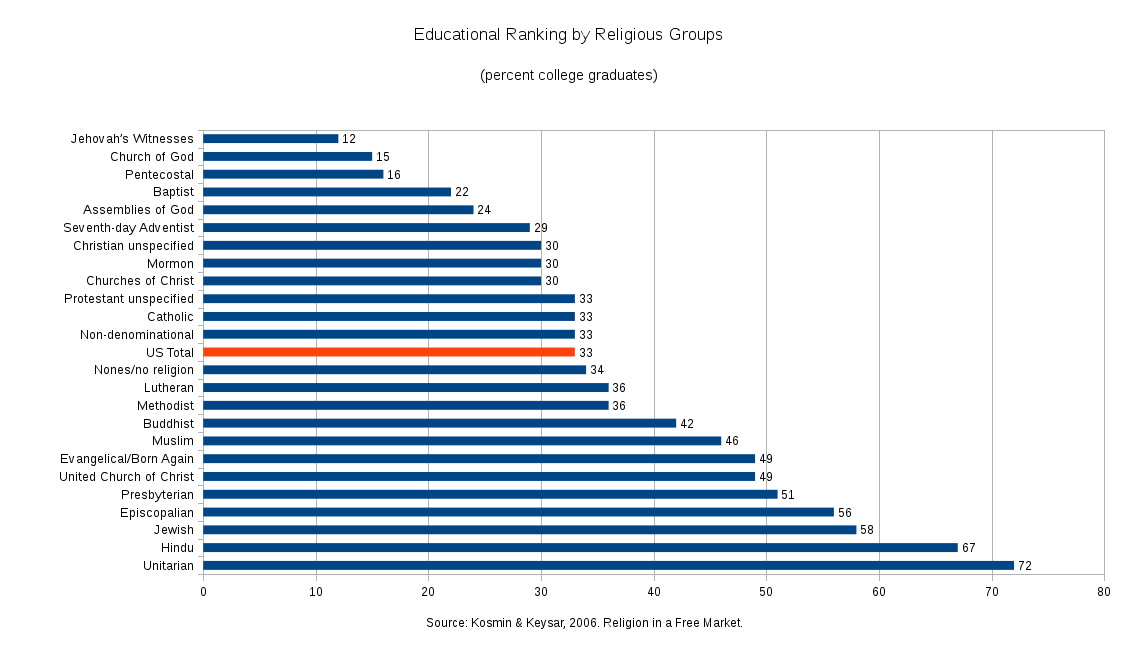 Sociologist Bradley Wright reviewed results from the 2008 Pew US Religious Landscape Survey and noted that religious groups normally have significant levels of education compared to those who are non-religious. "The irony" he states "is that some of the religiously unaffiliated explain their rejection of religion in terms of superior learning, but several religious groups have much higher levels of education." He found that Hindus, Jews, Episcopalians, Presbyterians, Buddhists, and Orthodox Christians