Raymond James Stadium, also known by the nickname "Ray Jay", is a multi-purpose stadium located in Tampa, Florida. It is home to the Tampa Bay Buccaneers of the National Football League (NFL) as well as the NCAA's South Florida Bulls football team. The stadium seats 65,618, which can be expanded to about 75,000 for special events with the addition of temporary seating. It was built at public expense as a replacement for Tampa Stadium and opened in 1998, and it is known for the replica pirate ship located behind the stands in the north end zone. Besides serving as the home field for the Buccaneers and the Bulls, the facility has been the site of three Super Bowls: Super Bowl XXXV in 2001, Super Bowl XLIII in 2009, and Super Bowl LV in 2021, in which the Buccaneers became the first team in NFL history to play and win a Super Bowl on their home field. In college football, Raymond James Stadium is the home of the annual Outback Bowl (since 1999) and Gasparilla Bowl (since 2018), hosted the ACC Championship Game in 2008 and 2009, and was the site of the College Football Playoff National Championship in 2017. Additionally, the stadium has hosted a wide variety of non-football events, including soccer matches, equestrian sports competitions, monster truck shows, and large concerts. It was the site of WrestleMania 37 in April 2021.

Immediately upon purchasing the Buccaneers in 1995, new owner Malcolm Glazer declared that twenty-eight year old Tampa Stadium was inadequate to justify the record $192 million he paid for the NFL franchise and began lobbying local government for a replacement. A few months later, the city of Tampa and Hillsborough County unveiled plans for a $168 million stadium that was to be paid for with a rental car surtax along with fees on items relating to stadium events, such as ticket surcharges and parking fees. However, the Glazer family rejected the plan within hours because it would reduce their revenue, and when local and state government officials did not agree on an alternative taxpayer-financed plan quickly enough for their liking, they threatened to move the Buccaneers elsewhere and were soon meeting with officials from several other cities to explore possible relocation sites. In early 1996, the city of Tampa and Hillsborough County proposed the establishment of a "Community Investment Tax", a 30-year half-cent sales tax increase that would pay for various public improvements along with a new stadium for the Bucs. The tax increase would have to be approved in a public referendum, which was scheduled for September. The "Community Investment Tax Stadium" (CITS) proposal was heavily promoted by the team along with several prominent local officials, and as part of intensive public relation campaign, Malcolm Glazer repeatedly promised to pay half the cost of the new stadium if fans put down 50,000 deposits on 10–year season ticket commitments priced at $190 to $2500 per seat. Former Tampa mayor Bill Poe sued to halt the referendum, as he claimed that the tax violated the Florida state constitution's ban on public support for private companies. Poe's objections were rejected, and plans for the vote were allowed to proceed. Public opinion polls indicated that support for the CITS proposal was still limited as election day neared, with the main reasons being a "negative reaction" to the Glazers' tactics and unwillingness to raise taxes to "help" owners who "overpaid" for an NFL team. In response, stadium proponents launched a "media blitz" of television and radio advertisements emphasizing the tax's potential impact on local schools and roads in an attempt to persuade residents who did not want to pay for a football stadium to "hold their nose" and vote yes anyway. On September 3, 1996, the ballot measure passed by a margin of 53% to 47%. After the vote, the season ticket deposit drive fell 17,000 short of its 50,000 goal at the team-imposed deadline, the Buccaneers' offer to pay half of stadium construction costs was withdrawn, and the facility was designed and built entirely at public expense. Before construction began on the stadium, the Buccaneers and the Tampa Sports Authority signed a lease in which local government paid the vast majority of operating and maintenance expenses while the franchise kept almost all of the proceeds from all events held there. Former Tampa mayor Bill Poe went back to court to challenge the legality of the lease, again citing the state's constitutional ban on using tax dollars to enrich a private business in claiming that the "sweetheart deal" should be voided. A local court ruled in Poe's favor, but upon appeal, the Supreme Court of Florida ruled that the lease was constitutional because the stadium provided a "public benefit", and construction continued as planned. In 1998 a 13-year deal was agreed with Raymond James Financial for naming rights to the stadium. The deal was extended in 2006 and 2016.

The stadium officially opened on September 20, 1998, when the Buccaneers defeated the Bears, 27–15. The stadium hosted its first Major League Soccer match on March 20, 1999, when the Tampa Bay Mutiny lost to D.C. United 5–2. The Mutiny folded after the 2001 season after facing declining revenue due to declining attendance and the Bucs' lease at Raymond James Stadium. They played their last home match on September 9, 2001—a 2–1 loss to the Columbus Crew. In April 2003, the Tampa Sports Authority proposed passing ownership of the stadium to Hillsborough County to avoid having to pay millions of dollars in property taxes (the Bucs' lease agreement dictated that they not have to pay property taxes). However, Bucs had a right of refusal and refused to sign off on the plan unless the local government paid more of the cost for gameday security and increased the amount of (county-purchased) insurance coverage for the stadium. The dispute continued for months until December 2003, when the county legally declared the stadium a condominium and took ownership. As part of the change, the Bucs were given ownership of portions of the structure. To win the Bucs' approval, the county agreed to refund the team's resultant property tax payments annually. After a nearly two-year legal battle, the Tampa Sports Authority came to a settlement with popular sports-seating and telescopic platform/bleacher company Hussey Seating of North Berwick, Maine. Following the stadium's opening in 1998, roughly 50,000 Hussey-manufactured seats at Raymond James Stadium began to fade from their original color – a bright, vibrant shade of red – to a shade of washed-out pink. Spotting this obvious defect, the Buccaneers organization pleaded to the TSA to sue the seating manufacturing company for the cost to replace the affected chairs in 2003. Initially, in May 2004, after testing samples of the seats, Hussey Seating did not find any cause for the fading, and thus, found no reason to replace the seats at the company's cost under the current 10–year warranty. After the TSA cited a portion of the warranty which did, in fact, state that Hussey would replace seats if any fading were to occur, Hussey president Tim Hussey admitted an error in the research and eventually would come to a $1.5 million agreement with the TSA to replace the problem seats. Reportedly, the seat-fading occurred due to a manufacturing error by Hussey, as a UV inhibitor – a sunscreen-like component for the plastic – was forgotten in the mixture used to create the seats. All of the problem seats were replaced by new, non–pink seats in the spring of 2006. In December 2015, the Buccaneers and the Tampa Sports Authority reached an agreement to complete over $100 million in improvements and renovations to the stadium. The negotiations took months, and were extended by Bucs' lawyers demanding additional concessions after an agreement was near in September 2015. In the end, the upgrades were paid with at least $29 million of public money, with the remainder paid for by the Bucs in exchange for the right to play a home game at another site beginning in the 2018 season and other concessions. Renovations began in January 2016, and the first phase was complete in time for the 2016 football season. 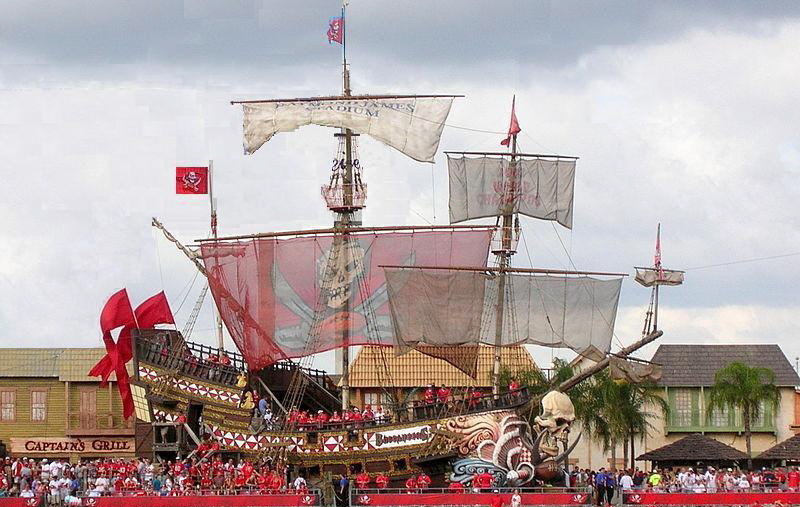 One of the most recognizable features of the stadium is a , 43-ton steel-and-concrete replica pirate ship in the north end zone, making it stand out from other NFL stadiums. Each time the Buccaneers score points, enter the other team's red zone, or win a home game, the replica cannons on the ship are fired off. The cannons fire once for each point scored. In addition, when the Buccaneers enter their opponent's red zone, stadium hosts hoist team flags around the perimeter of the upper deck. During various times throughout the game, the song "Yo Ho (A Pirate's Life for Me)" is played on the stadium public address system (taken from Pirates of the Caribbean), which signals patrons on board the ship to throw beads, T-shirts, and other free prizes to the people below. The segment is also known as a "Mini Gasparilla" to most fans. An animated parrot sits on the stern of the pirate ship. Controlled by radio and remote control, the parrot picks fans out of the crowd and talks to those passing by. The pirate ship's sails, which for NFL games usually shows Buccaneers logos and sponsors, are often changed to suit the event that it hosts. The two "Buc Vision" Daktronics video displays were among the largest in the league when they were built. In 2016 they were replaced with , HD video boards in both end zones. 'Buccaneer Cove' in the north end zone features a weathered, two–story fishing village facade, housing stadium concessions and restrooms. All areas of the stadium are ADA compliant. Temporary bleachers were erected in the end zones for Super Bowl XXXV, which set a then-record stadium attendance of 71,921. The stadium attendance record has since been surpassed by the 2017 College Football Playoff National Championship, which also made use of temporary seating. Super Bowl XLIII and Super Bowl LV used temporary seating as well. In 2003, the corner billboards in the stadium were replaced with rotating trilon billboards and these were replaced in 2016 with new high visibility displays. Raymond James Stadium boasts the second-best turf in the NFL, according to a 2009 biannual players' survey. In early 2016, the stadium was given an extensive facelift. The most notable improvement was the replacement of the video displays with state of the art, high visibility video displays in both the north and south end zones along with the addition of a new video tower in each corner. All together, the video displays cover more than , the third-largest video displays in the NFL. The original sound system and the stadium's luxury boxes were also upgraded.

During construction, the facility was known as Tampa Community Stadium. In June 1998, prior to its opening, the naming rights were bought by St. Petersburg-based Raymond James Financial for $32.5 million in a 13–year agreement. Contract extensions signed in 2006 and 2016 have extended the naming rights deal through 2028. The stadium is referred to as "Ray Jay" or "The New Sombrero", a spinoff from "The Big Sombrero", the nickname of Tampa Stadium. Somewhat derisively, it has been occasionally referred to as "the CITS", a name coined by long-time local sportscaster Chris Thomas which stands for "Community Investment Tax Stadium", referring to the fact that the stadium was entirely financed by local taxpayers.

Ranked by attendance, the top four USF home games are:

In 2017, Raymond James Stadium hosted the College Football Playoff National Championship, where the Clemson Tigers defeated the Alabama Crimson Tide in a rematch of the 2016 championship. With an attendance of 74,512, it was the largest crowd for a football game in stadium history.

WWE planned to host WrestleMania 36—the 2020 edition of its flagship professional wrestling pay-per-view—at Raymond James Stadium on April 5. However, due to the COVID-19 pandemic, WWE subsequently filmed it at its training facility in Orlando instead, behind closed doors with no audience and only essential staff present. In January 2021, WWE announced that WrestleMania 37 (which was originally announced as being hosted by SoFi Stadium in Inglewood, California) would be hosted by Raymond James Stadium on April 10 and 11, 2021.

Raymond James Stadium has hosted several large scale concerts, with the largest attendance (72,000) coming at a show by U2 in 2009.