The Pro Football Hall of Fame is the hall of fame for professional American football, located in Canton, Ohio. Opened in 1963, the Hall of Fame enshrines exceptional figures in the sport of professional football, including players, coaches, franchise owners, and front-office personnel, almost all of whom made their primary contributions to the game in the National Football League (NFL); the Hall inducts between four and eight new enshrinees each year. , there are a total of 326 members of the Hall of Fame, 189 of whom are living. Members are referred to as "Gold Jackets" due to the distinctive gold jackets they receive during the induction ceremony. Between four and eight new inductees are normally enshrined every year. There was no event in 2020 because of the coronavirus pandemic. For 2021, an additional 15 members, known as the "Centennial Slate", were inducted into the Hall of Fame to celebrate the 100th anniversary of the NFL. 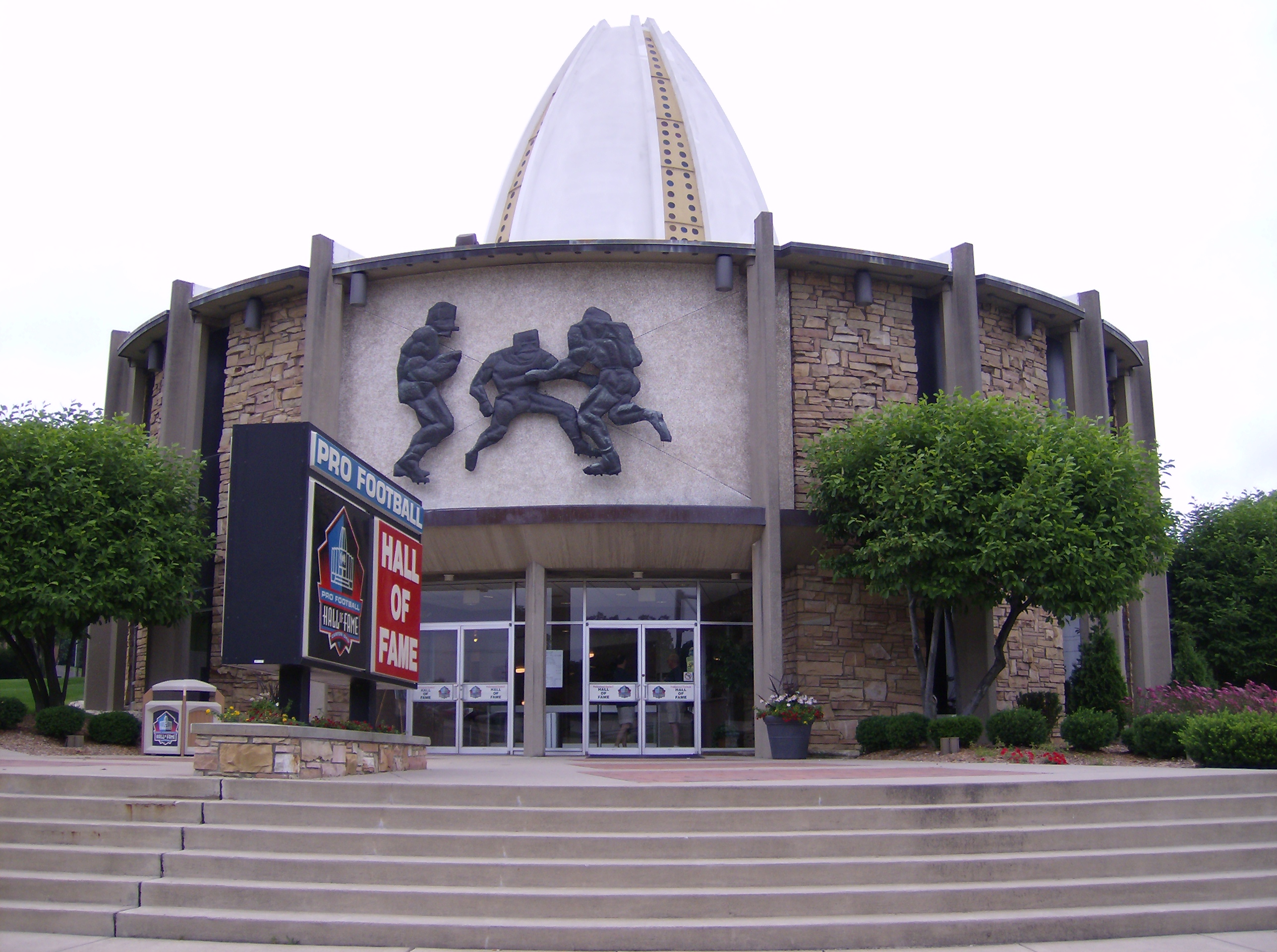 The city of Canton, Ohio successfully lobbied the NFL to have the Hall of Fame built and has cited three reasons. First, the NFL was founded in Canton on September 17, 1920 (at that time it was known as the American Professional Football Association). Second, the now-defunct Canton Bulldogs were a successful pro football team and the NFL's first two-time NFL champion (in 1922 and 1923). Third, the Canton community held a fundraising effort that garnered nearly $400,000 () to get the Hall of Fame built. Groundbreaking for the building was held on August 11, 1962. The original building contained just two rooms, and of interior space. In April 1970, ground was broken for the first of many expansions. This first expansion cost $620,000, and was completed in May 1971. The size was increased to by adding another room. The pro shop opened with this expansion. This was also an important milestone for the Pro Football Hall of Fame, as yearly attendance passed the 200,000 mark for the first time. This was at least in some part due to the increase in popularity of professional football caused by the advent of the American Football League and its success in the final two AFL-NFL World Championship games.

In November 1977, work began on another expansion project, costing US$1,200,000. It was completed in November 1978, enlarging the gift shop and research library, while doubling the size of the theater. The total size of the hall was now , more than 2.5 times the original size. The building remained largely unchanged until July 1993. The Hall then announced yet another expansion, costing US$9,200,000, and adding a fifth room. This expansion was completed in October 1995. The building's size was increased to . The most notable addition was the ''GameDay Stadium'', which shows an NFL Films production on a by Cinemascope screen. In 2013, the Hall of Fame completed its largest expansion and renovation to date. Currently, the Hall of Fame consists of 118,000 square feet. Johnson Controls Hall of Fame Village, an estimated $900 million expansion project adjacent to the Pro Football Hall of Fame, has completed Phase I of construction; preparations for beginning Phase II are currently underway.

Executive Directors/Presidents of Hall of Fame 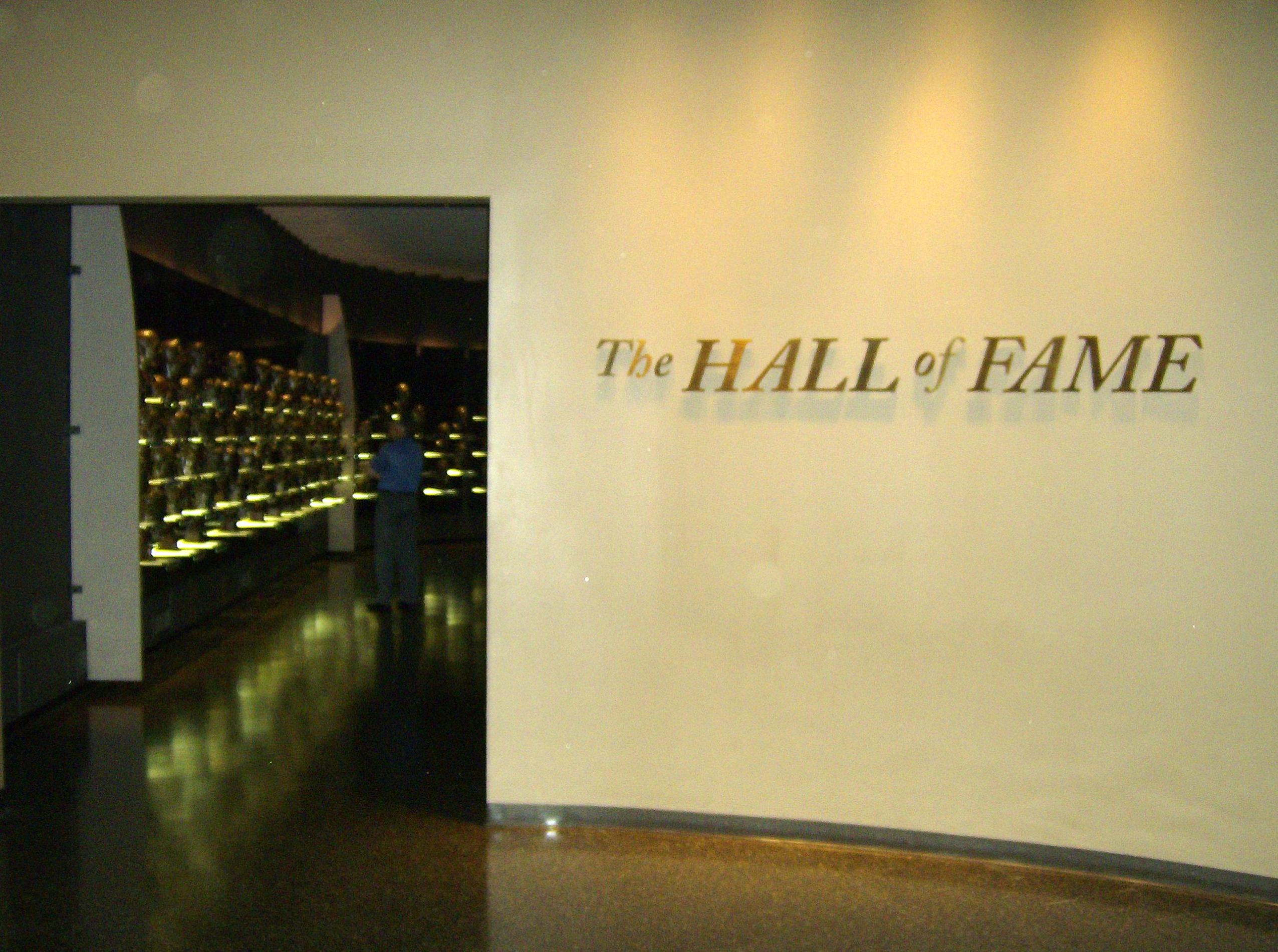 To be eligible for the nominating process, a player or coach must have been retired for at least five years. Any other contributor such as a team owner or executive can be voted in at any time. Fans may nominate any player, coach or contributor by simply writing via letter or email to the Pro Football Hall of Fame. The Selection Committee is then polled three times by mail (once in March, once in September, and once in October) to eventually narrow the list to 25 semifinalists. In November, the committee then selects 15 finalists by mail balloting. A Seniors and Contributors Committee, subcommittees of the overall Selection Committee, nominate Seniors (those players who completed their careers more than 25 years ago) and Contributors (individuals who made contributions to the game in areas other than playing or coaching). The Seniors Committee and Contributors Committee add two or one finalist(s) on alternating years which makes a final ballot of 18 finalists under consideration by the full committee each year. Committee members are instructed to only consider a candidate's professional football contributions and to disregard all other factors. The Selection Committee then meets on "Selection Saturday", the day before each Super Bowl game to elect a new class. To be elected, a finalist must receive at least 80 percent support from the Board, with at least four, but no more than eight, candidates being elected annually.

In 2020, a special Blue-Ribbon Panel selected an additional 15 new members, known as the Centennial Slate, to be inducted into the Hall of Fame to celebrate the 100th anniversary of the NFL. Among these 15 members, ten would be seniors. On January 11 during the weekend of the NFL Divisional playoffs, Hall of Fame president David Baker went on the set of ''The NFL Today'' to personally tell Bill Cowher, who was working as an analyst on that pregame show, that he was selected as one of the members of the Centennial Slate. One day later, Baker went on the set of ''Fox NFL Sunday'' to inform Jimmy Johnson, working as an analyst on Fox's studio show, that he was also selected. The rest of the Centennial Slate members were revealed on January 15. The remaining 13 members of the Centennial Slate elected to the Hall of Fame in 2020 are: Jim Covert, Winston Hill, Harold Carmichael, Duke Slater, Ed Sprinkle, Steve Sabol, Alex Karras, Bobby Dillon, Donnie Shell, George Young, Cliff Harris, Mac Speedie, and former NFL Commissioner Paul Tagliabue. They will be enshrined in 2021, but will still be considered part of the Centennial Class of 2020.

The enshrinement ceremony is the main event of the annual ''Enshrinement Week Powered by Johnson Controls'' that kicks off every NFL season. The celebration is held in Canton, throughout the week surrounding the enshrinement ceremony. All members of the Hall of Fame are invited to attend the annual ceremony. Enshrinees do not go into the Pro Football Hall of Fame as a member of a certain team. Rather, all of an enshrinee's affiliations are listed equally. While the Baseball Hall of Fame plaques generally depict each of their inductees wearing a particular club's cap (with a few exceptions, such as Catfish Hunter and Greg Maddux), the bust sculptures of each Pro Football Hall of Fame inductee make no reference to any specific team. In addition to the bust that goes on permanent display at the Hall of Fame, inductees receive a distinctive Gold Jacket and previous inductees nearly always wear theirs when participating at the new inductee ceremonies. Previous induction ceremonies were held during the next day (Sunday from 1999–2005, Saturday in 2006), situated on the steps of the Hall of Fame building. Starting in 2002, the ceremony was moved to Fawcett Stadium (now Tom Benson Hall of Fame Stadium), where it was held from 1963 to 1965. Since 2007, the enshrinement ceremony has been held on the Saturday night, since 2017 two days after the Hall of Fame Game.

The small number of candidates elected each year has helped foster what some perceive as an inequality of representation at certain positions or in certain categories of player, with defensive players in general and defensive backs and outside linebackers in particular, special teams players, wide receivers, deserving players who primarily played on bad teams, and those from the "seniors" category, being slighted. This has included a 2009 ''The New York Times'' article which criticized the Hall for not including punter Ray Guy on its ballot, also noting that the Hall did not have an inductee at the time representing the position. (At least two inductees, Sammy Baugh and Yale Lary, punted in addition to playing other positions.) Guy was eventually inducted as part of the 2014 class for the Hall of Fame. There has also been criticism that certain players get overlooked because their team underproduced during their careers. The Pro Football Hall of Fame is unique among North American major league sports halls of fame in that officials have generally been excluded from the Hall. Only one official, 1966 inductee Hugh "Shorty" Ray, has been enshrined. The National Baseball Hall of Fame and Museum, Naismith Memorial Basketball Hall of Fame and Hockey Hall of Fame have each inducted game officials as members. In part to rectify the lack of officials and other off-field contributors, the Hall of Fame added a “Contributors” committee beginning with the class of 2015, which will nominate officials, general managers, owners and other positions that have historically been overlooked by the committee at large. Another prominent absence from the Hall is sports-journalist Howard Cosell, who has yet to be awarded the Pete Rozelle Radio-Television Award despite his well-known association with ''Monday Night Football''. An August 2010 ''Sports Illustrated'' article hints that Cosell may have even been "blacklisted" by the NFL. As the late 2010s approached, a number of controversial and polarizing figures began to reach eligibility for the Hall. For example, Darren Sharper's career achievements make him a candidate for the Hall, but there is debate over whether he should be inducted due to his conviction on multiple rape charges after he retired. Terrell Owens's exclusion from the Hall in his first two years of eligibility despite his strong individual statistics was a subject of public debate. Owens was elected to the Hall of Fame in 2018, but refused to attend the enshrinement ceremony.