Port Shepstone is a town situated on the mouth of the Mzimkhulu River, the largest river on the KwaZulu-Natal South Coast of South Africa. It is located halfway between Hibberdene and Margate and is positioned 120 km south of Durban. It is the administrative, educational and commercial centre for southern Natal.

The town was founded in 1867 when marble was discovered near the Mzimkhulu River mouth, and is named after Sir Theophilus Shepstone of the Natal government of the 1880s. William Bazley built a harbour, and the first coaster entered the harbour on May 8, 1880. In 1882 a party of 246 Norwegian immigrants settled in the town and subsequently started to play a major role in the development of the area. Post the opening of the railway to Durban in 1901, the harbour fell into disuse and eventually the river silted up again, making it impossible to use. The 27,000-candela lighthouse still stands at the mouth of the Mzimkulu River.

Norwegian immigration to Port Shepstone began in the late 19th century, when 246 Norwegians (along with 175 Briton and 112 German settlers) came ashore with a steamship which arrived in 1882. The soon-to-be settlers founded a nearby interior village within the same year, known as Marburg. The Norwegian settlers played a large role in the development of not only Marburg, but also Port Shepstone and nearby areas. Norwegian immigration to the region was a result of the Natal Immigration Board’s efforts to claim land for Europeans in South Africa. When the Norwegians first arrived, they were the largest European group in Alfred County. Remains of the Norwegian presence can still be seen today in certain places of the town, such as, ''Fredheim'' and Oslo Beach, with its main street ''King Haakon Drive''. The Norwegians erected a Norwegian Lutheran church, school, cultural hall, choir, and rowing club. A newspaper in Norwegian language was also distributed in Port Shepstone. Drinks such as akvavit and cuisine, including cheese from soured milk, were easily accessible. When the Norwegians arrived, few European settlers lived in the area and the town of Port Shepstone consisted of one hotel, two cabins, one shop, and little else.

Port Shepstone was declared “a full fiscal port’ in 1893, and after Durban officially became the region’s second harbour. Eventually, though, the ongoing wreckages and arrival of the railway, was to see the gradual closure of the harbour and the start of the real Port Shepstone boom. When the railroad arrived in Port Shepstone in 1901, the travel time to Durban was reduced to five hours, and the city became far less isolated. The railway connection opened for increased immigration for other settlers, and the Norwegians were soon outnumbered by German and British settlers. Between 1911-12, the number of students at the Norwegian school became too low for the school to keep open, and it consequentially closed.

Port Shepstone is governed by the Ray Nkonyeni Local Municipality, which is part of the larger Ugu District Municipality. It is not only a regional economic hub for the South Coast but also the seat for both Ray Nkonyeni and Ugu municipalities.

The town lies on the Indian Ocean coastline, which lies to the east and is surrounded by its extension of Umtentweni to the north, Boboyi to the west and Shelly Beach to the south. Port Shepstone's greater area extends from Oslo Beach in the south, to Melville in the north and Merlewood in the west. Nearby towns include Margate, Hibberdene, Boboyi, Shelly Beach and Uvongo.

Port Shepstone has two police stations (in the CBD and Southport) and two hospitals, Port Shepstone Regional Hospital and Hibiscus Private Hospital, and two shopping centers, Sheppy Centre and Oribi Plaza. Nearby and larger shopping centers are South Coast Mall and Shelly Centre, both located in Shelly Beach. The Port Shepstone Country Club is located on the northern banks of the Mzimkhulu River opposite the CBD in Umtentweni. Other golf courses in the broader area are in Margate, Southbroom, Hibberdene, Pennington and Scottburgh.

As the KZN South Coast's main economic hub, Port Shepstone includes the head offices for the Ugu District Municipality and Ray Nkonyeni Local Municipality. There is also a Magistrates court and the Department of Home Affairs, South African Social Security Agency (SASSA), Small Enterprise Development Agency (SEDA) and the South African Revenue Service (SARS) have regional offices in Port Shepstone. The manufacturing hub in the KwaZulu-Natal South Coast is mainly centered around Port Shepstone, especially around Marburg, which is a suburb that lies west of Port Shepstone and is the KZN South Coast's main industrial hub. The town's industries also include a sugar mill, a lime works and a marble quarry. Additionally, timber, wattle bark and sub-tropical fruit are produced in the district.

Port Shepstone is not only an economic hub in the South Coast but is also a tourist hub. Attractions include the Mzimkhulu River Marina, which has leisure boat trips on the river in which people can admire the rich wildlife and bird life along the banks of the river. Other attractions include the Port Shepstone Museum; the museum includes the town's history with a series of exhibits carrying a maritime theme; the Port Shepstone Lighthouse, which has a 27 000 candela lighthouse that still stands at the mouth of the Mzimkhulu River. The present day cast iron lighthouse was erected during 1906 and can still be explored today. Attractions in the broader area (KZN South Coast) include the Oribi Gorge 21 km west of Port Shepstone, Aliwal Shoal, Umtanvuma Nature Reserve, Pure Venom Reptile Farm and the Riverbend Crocodile Farm among others. Beaches in the greater Port Shepstone area include Anerley, Banana Beach, Melville, Oslo Beach, Port Shepstone (main beach), Sea Park, Southport, Sunwich Port and Umtentweni.

Port Shepstone railway station opened in 1917, serving as both the southern terminus of the Cape gauge line from & to Durban, as well as the southern coastal terminus of the narrow gauge Alfred County Railway to Harding. After the standard gauge Transnet passenger services shut down in 1986, the ACR continued operations until 2005, when the famous ''Banana Express'' ceased operation. 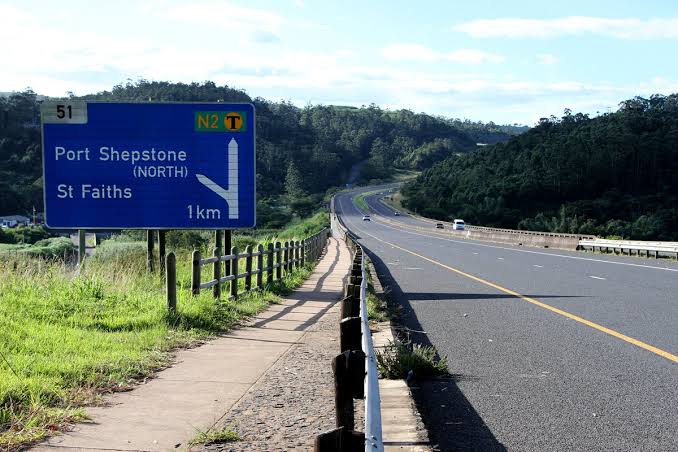 The N2 highway from Durban has two off ramps in Port Shepstone, exit 45 and exit 51. Exit 45 is where the N2 meets the R61 highway to Margate and Port Edward and is where the N2 goes inland, away from the coast towards Kokstad. The off-ramp is also where the Oribi Toll Plaza is situated and as from there the R61 completes the last leg of the South Coast Toll Route. Exit 51 is located north of Port Shepstone in Umtentweni and the road at the off-ramp connects to Umtentweni and St Faith's. An alternative route to the South Coast Toll Route is to either take the R102 if heading north towards Durban or south towards Port Shepstone and the R620 heading south towards Margate and Southbroom and north towards Port Shepstone.