Pensacola Christian College (PCC) is a private Independent Baptist liberal arts college in Pensacola, Florida. Founded in 1974 by Arlin and Beka Horton, it has been accredited by the Transnational Association of Christian Colleges and Schools since 2013.

Arlin and Beka Horton graduated from Bob Jones University in 1951, and moved to Pensacola, Florida in 1952 to found a Christian grade school. That school, Pensacola Christian Grade School, opened in 1954; it was later renamed Pensacola Christian Academy. In 1974, the Hortons opened Pensacola Christian College to further their vision of "Education from a Christian Perspective." The college had 100 students its first year open, and was based in a single building, Ballard Hall. Pensacola Theological Seminary, an extension of PCC's graduate school, was founded in 1998. Its avowed purpose is "to fill each student’s mind and heart with what the Bible says." In February 2012, Arlin Horton announced that he would be retiring from the ministry after the May 2012 school year. The school's board voted unanimously to install Troy Shoemaker, a PCC graduate, as president of the college. Mr. Shoemaker, a former administrator at Pensacola Christian Academy, completed his undergraduate education at PCC and holds a Doctor of Education degree from the institution as well as an education specialist degree from the University of West Florida. 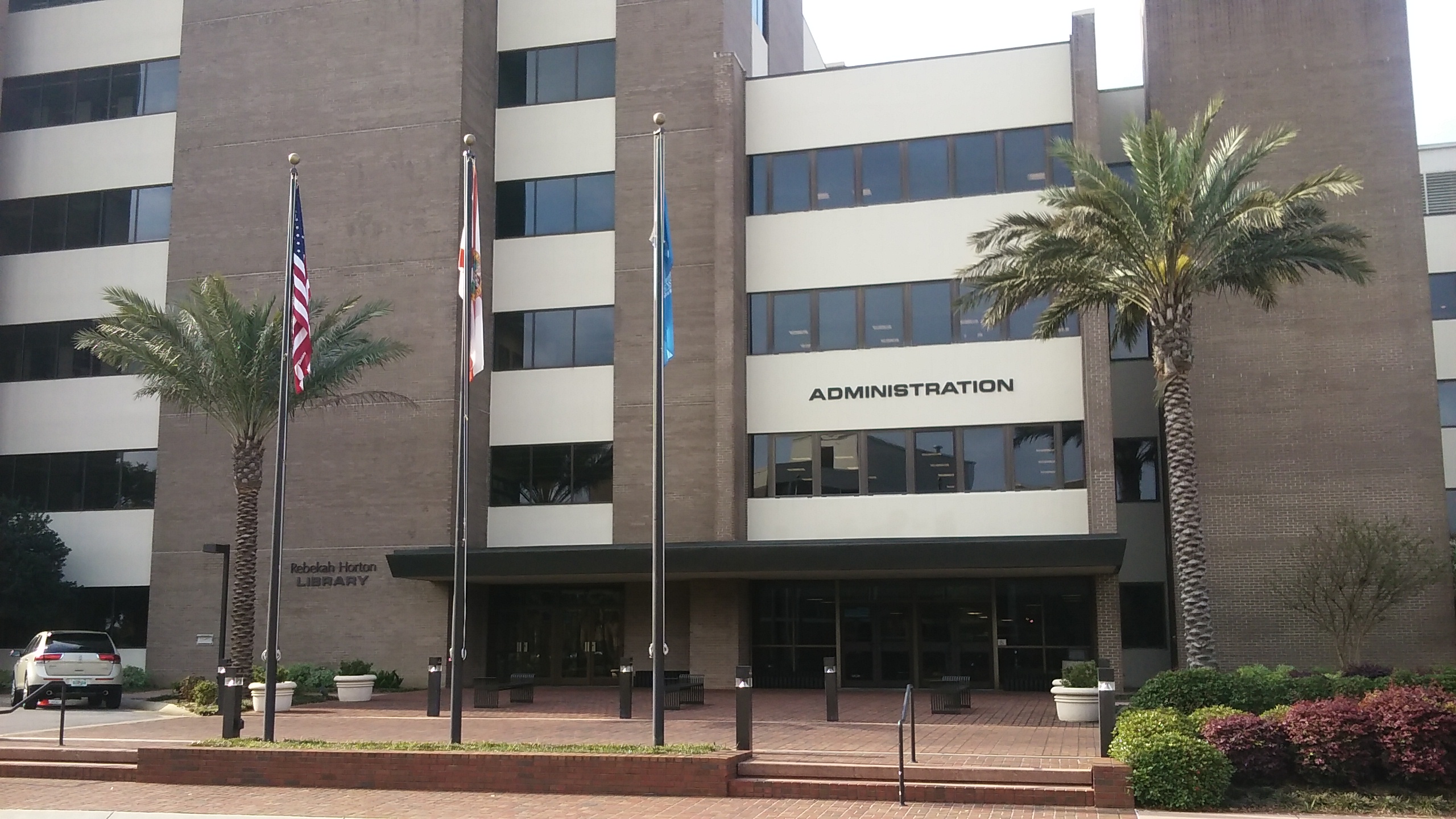 PCC has nine academic divisions including Bible, business, education, engineering and computer science, humanities, natural sciences, nursing, performing arts, and visual arts. Graduate degrees are offered through the graduate school at PCC and through Pensacola Theological Seminary in the fields of Bible, business administration, communicative arts, divinity, education, ministry, music, and nursing. The college markets its education programs as being specifically intended to prepare educators for employment at Christian schools rather than public schools, though graduates of the programs have been eligible to apply for public school teacher certification in Florida since 2000. Because the college accepts a literal interpretation of the Genesis creation narrative from the Bible and rejects evolution and other mainstream theories about the origins and age of Earth, students are taught young Earth creationism, and that God created the Earth in six literal 24-hour days. PCC's biology classes are based on creationism.

PCC participates in the National Christian College Athletic Association (NCCAA) for intercollegiate sports. Sports include men's basketball and soccer and women's basketball and volleyball. The men's wrestling team won the NCCAA national championship in 1994, 1995, 1996, and 1998, the last year before the NCCAA discontinued the sport. The Men's Eagles Basketball games as well as the Lady Eagles basketball games are played in the arena level of the Sports Center. PCC also hosts a number of invitational high school sporting tournaments and camps.. In addition to intercollegiate athletics, PCC students are also afforded the opportunity to play intramural sports through their Collegians. Sports offered through collegians include soccer, basketball, softball, volleyball, and broom-hockey among others. Every fall Collegian Soccer culminates with the winners of the playoffs facing each other in the annual Turkey Bowl held over the Thanksgiving weekend. In the spring, students can play softball and basketball.

The campus offers opportunities for individual or group recreation, such as the Arlin R. Horton Sports Center which originally opened in 1993. The sports center has facilities for ice skating, bowling, racquetball, miniature golf, table tennis, and weight lifting. In addition with an expansion completed in 2008 by Hewes & Company, LLC, it includes a surfing wave, water cannons, an inline skating track, a rooftop sun deck, a snack bar, escape room and climbing walls. The campus also has the John Ray Hall Field House in which students can play basketball, swim, work out in the weight room, and play tennis. For students willing to make the 30-minute drive, the West Campus has 24 Hobie catamarans with classes "offered in sailing, kayaking, swimming, and lifeguarding."

PCC policies govern many aspects of the students' lives, including dress, hairstyles, cleanliness of residence hall rooms, styles of music, borrowing, off-campus employment, and Internet access. For example, "All students are expected to dress modestly, in conservative fashions and . . . men are not to wear effeminate hairstyles or apparel." PCC also prohibits physical contact and interaction between unwed members of the opposite sex. For example, a chaperone and "day-pass" is required for a "mixed group" for students under the age of 23. Students over the age of 23 are not required to have a chaperone on a date, but cannot go to a beach or a park after dark and cannot "visit the home of an unmarried person of the opposite gender." Most stairwells, elevators, and parking lots on campus are segregated by gender. Other prohibited activities at PCC include "fornication, adultery, homosexual behavior, or any other sexual perversion. Also, any involvement in pornography or sexual communications, including verbal, written, or electronic." In addition, "most forms of dancing," profanity, hazing, discrimination, gambling, stealing and "witchcraft, séances, astrology, or any other satanic practices" are also banned." Students are also not allowed to use, possess, or "associate" with alcohol, tobacco, and illicit drugs. Policy violations also include visiting movie theaters, patronizing unauthorized area businesses, being off campus after hours, being in a residence hall belonging to a member of the opposite sex, and engaging in social activities with members of the opposite sex as a group off campus.

The school operates a "demerit" system where "demerits" are "recorded on a student’s record for the purpose of limiting continued misconduct, given for continued neglect of responsibilities or for more serious offenses." PCC has four levels of punishment; students can be given "infractions," can be "limited", "shadowed", or expelled. For students, who receive "75 demerits in consecutive semesters or 100 demerits within a semester may be subject to suspension." Students who have these demerits are subject to administrative review by the Student Court, during which demerits are assigned or canceled corresponding to the degree of the infraction or circumstantial conditions surrounding the incident in question." In the past (at least until 2008), students who acquired a certain number of demerits in a semester were "limited," meaning they were not allowed to leave campus for a period of time. Students suspected of more serious violations could be subject to being "shadowed," where they were assigned to a Residence Assistant (a fellow student who was selected by PCC to provide leadership in the residence hall and to enforce college regulations). This included being required to attend the Residence Assistant's classes and moving to the Residence Assistant's room. While being shadowed the student was prohibited from speaking with any student other than with the Floor Leader who was shadowing them. The rules and disciplinary policies at Pensacola Christian College have been the subject of criticism. In 1996 a PCC alumnus started an electronic newsletter entitled ''The Student Voice'', which criticized PCC, particularly the school's rules and demerit system. It was originally published in a newsletter format distributed exclusively via e-mail, and it was later published at www.pensacolachristiancollege.com. Following numerous attempts by the college to have the website shut down through arbitration and lawsuits, the website's owners relinquished control of the domain to the college, who has redirected the domain to the main PCC website.

PCC rejects Calvinism, Modernism, Neo-orthodoxy, and the modern day charismatic movement and specifically states that "Pensacola Christian is not a part of the 'tongues movement' and does not allow students to participate in or promote any charismatic activities, nor do we permit students to promote hyper-Calvinism." PCC also states that they believe the Textus Receptus is the superior Greek text of the Bible and upon this basis use the King James Version of the Bible for all their pulpit ministry and classroom Bible instruction.

In 2014, former PCC student Samantha Field wrote a blog post that included the stories of several anonymous victims who had been sexually assaulted while attending PCC. According to Field, upon reporting their assault to the college, the victims were subjected to blaming, punishment, and expulsion by Student Life faculty. In one of the stories relayed by Field, a former PCC student referred to as Beth was bound and sexually assaulted by her then-boyfriend in a construction zone on PCC property. She was taken to the hospital with severe injuries. When she returned to the school, however, Student Life informed her that she would be expelled "because she is a fornicator." PCC released a statement vehemently denying all the accusations of Field's blog, claiming that PCC was being "harassed and victimized" by the accounts. They claimed to have done a thorough investigation of the matter by consulting their official records, and they categorically denied that any student had ever been expelled for being the victim of rape or any other crime. Kelly McBride, a senior faculty ethicist at the Poynter Institute, pointed out that PCC's process should have included inviting students who have felt victimized to voice their concerns, adding that PCC's defensiveness could create the appearance that the school has something to hide. 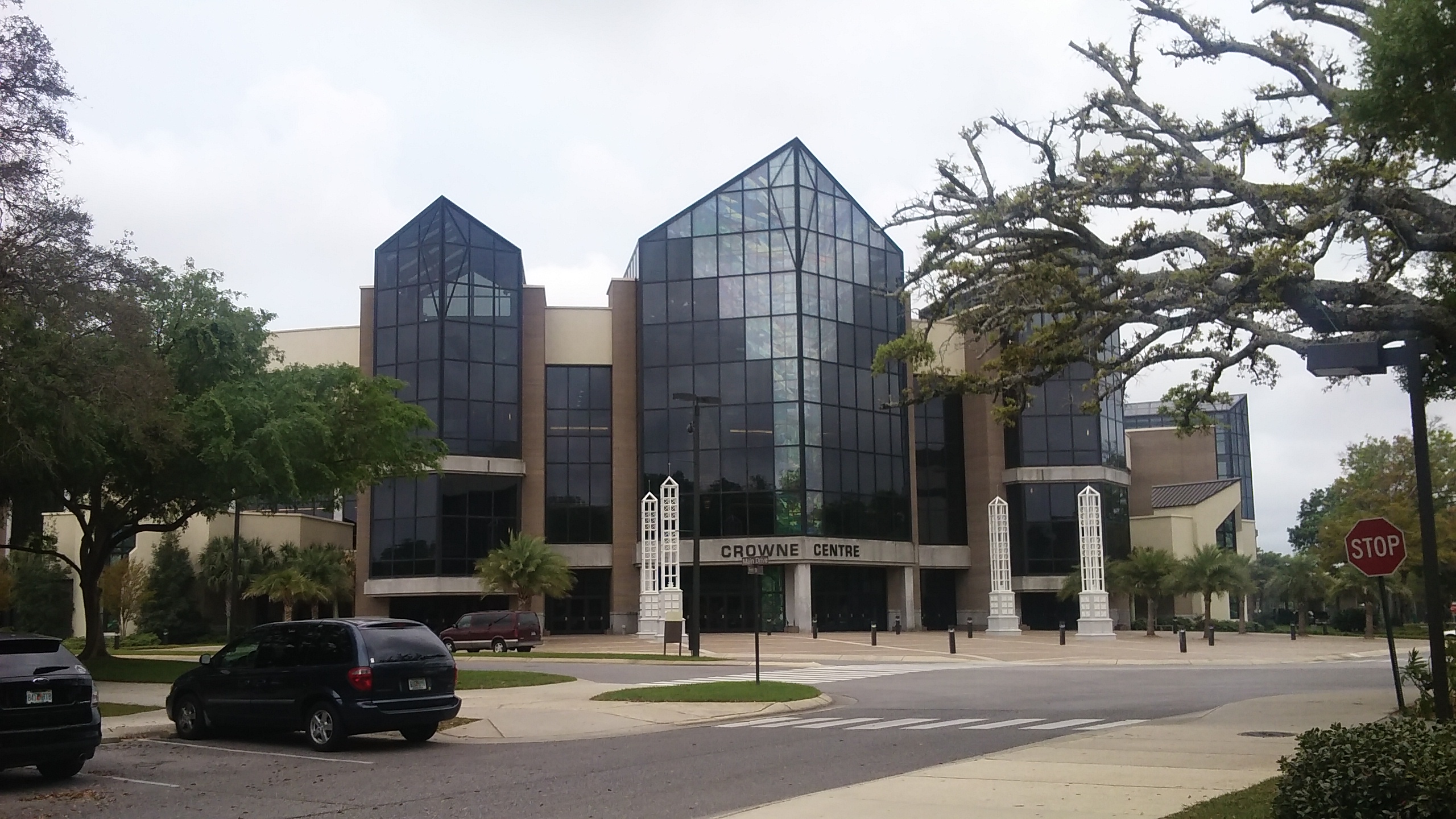 The Campus Church, an Independent Baptist church, meets in the Crowne Center on Pensacola Christian College's Campus and has Sunday morning, evening and Wednesday evening services. Original founded in 1974, the Campus Church's first pastor was Bob Taylor, who served in the ministry at Campus Church for fourteen years. In 1988, Jim Schettler became the senior pastor and served for eighteen years, resigning in May 2006. On December 10, 2006, Arlin Horton announced that Neal Jackson would be the pastor. Neil Jackson resigned from Campus Church on August 20, 2009. On August 14, 2011, Denis McBride was installed as the senior pastor. During the summer of 2017, Tim Zacharias was called to become the assistant pastor of Campus Church.

The Campus Church holds their weekly services from the Crowne Center at Pensacola Christian College. These services are recorded and edited for the weekly television broadcast of ''Rejoice in the Lord''. The programming of ''Rejoice in the Lord'' consists of musical numbers performed by the Rejoice Choir, various PCC musical ensemble groups, congregational singing recorded in the Campus Church and preaching by Pastor Jeff Redlin. The hour-long television program is broadcast at 8 p.m. Eastern on Sundays on the Daystar Television Network.

Abeka, formerly known as A Beka Book, is a publisher affiliated with Pensacola Christian College that produces K–12 curriculum materials that are used by Protestant fundamentalist and other conservative Evangelical Christian schools, as well as non-fundamentalist Christian schools and homeschooling families around the world. It is named after Rebekah Horton, wife of college president Arlin Horton, both of whom founded both PCC and Abeka, administering them simultaneously. Abeka and BJU Press (formerly Bob Jones University Press) have been considered the two major publishers of Christian-based educational materials in America. Abeka has been criticized for selling works that do not follow a scientific consensus regarding the origins of the universe, origins of life, and evolution. In ''Association of Christian Schools International et al. v. Roman Stearns et al.'', a judge upheld the University of California's rejection of Abeka publications for preparatory use because the books are "inconsistent with the viewpoints and knowledge generally accepted in the scientific community." In 1996, state and federal agencies requested millions of dollars of unpaid taxes between 1988 and 1995 from A Beka Book, at the time a division of PCC. To avoid any offenses, Pensacola Christian College paid the 44.5 million Federal Taxes, as well as the 3.5 million FL state taxes in full. (https://www.christianitytoday.com/ct/1996/october28/6tc94c.html)