Oxygen is an American pay television channel owned by the NBCUniversal Television and Streaming unit of NBCUniversal, a subsidiary of Comcast. The channel primarily airs true crime programming and dramas targeted towards women. The network was founded by Geraldine Laybourne, and carried a format focused on lifestyle and entertainment programming oriented towards women, similar to competing channels such as Lifetime. NBCUniversal acquired the network in 2007; under NBCU ownership, the network increasingly produced reality shows aimed at the demographic, and was relaunched in 2014 to target a "modern", younger female audience. After the network experienced ratings successes with a programming block dedicated to such programming, Oxygen was relaunched in mid-2017 to focus primarily on true-crime programs. As of February 2015, approximately 77.5 million American households (66.5% of households with television) receive Oxygen. Under its current format, the network primarily competes with Investigation Discovery and HLN.

The privately held company Oxygen Media was founded in 1998 by former Nickelodeon executive Geraldine Laybourne, talk-show host Oprah Winfrey, media executive Lisa Gersh, and producers Marcy Carsey, Tom Werner and Caryn Mandabach (of Carsey-Werner fame). Laybourne was the service's founder, chairwoman, and CEO, staying with the channel until the NBCUniversal sale. The company's subscription network Oxygen launched on February 2, 2000. The channel's first headquarters were at Battery Park City in New York City, near the World Trade Center. It was knocked off the air on September 11, 2001; the Time Warner Cable-owned regional news channel NY1 was broadcast to all Oxygen subscribers across the country until the studio reopened within a week after the attack. The network's operations were later consolidated in the Chelsea Market, a former Nabisco factory at 15th Street and Ninth Avenue in New York City. Oxygen's operations are now based at 30 Rockefeller Plaza as part of Comcast's consolidation of its newly owned NBC Universal properties. The channel originally began as an interactive service focusing on original programming with some reruns (such as ''Kate & Allie''), and featured a black bar at the bottom of the screen (referred to as "the stripe", occupying the bottom 12% of the screen) which would show various information (the interactive part involved the channel's website); the technique was cloned by Spike's precursor The New TNN; the stripe was eventually dropped. Prior to 2005, the channel carried a limited schedule of regular season WNBA games produced by NBA TV. The channel later began to focus chiefly on reality shows, reruns, and movies. For a time during the talk show's syndication run, Oxygen aired week-delayed repeats of ''The Tyra Banks Show''. The yoga/meditation/exercise program ''Inhale'' was the last inaugural Oxygen program on air into the channel's NBC Universal era, albeit in repeats; it was cancelled in 2010. ''Campus Ladies'', ''Bliss'', ''Oprah After the Show'', ''Talk Sex with Sue Johanson'', ''The Janice Dickinson Modeling Agency'', ''Snapped'', ''Girls Behaving Badly'' and ''Bad Girls Club'', a reality series, were the highlight shows of the network at this time. Oxygen launched with immediate DirecTV carriage, and arrived on Dish Network in early 2006 during that provider's carriage conflict with Lifetime. 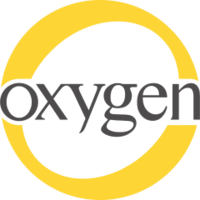 On October 9, 2007, NBC Universal announced it would be purchasing Oxygen for $925 million. The sale was completed on November 20, 2007. NBC Universal's cable division announced at an industry upfront presentation on April 23, 2008, that the channel would rebrand and unveil a new logo on June 17, 2008; in the months since the sale the ''Oh!'' heading was dropped from the channel's visual branding. The logo premiered one week early on June 8, 2008. For the 2008 Summer Olympics, Oxygen aired events and programming weeknights relating to gymnastics, equestrian, and synchronized swimming through NBC's Olympic broadcasts. On June 29, 2009, Oxygen premiered ''Dance Your Ass Off'', a reality dance competition program in which overweight people dance while they lose weight; the program was cancelled after its second season due to low ratings. On April 5, 2010, Oxygen launched its second night of original programming with the fifth-season premiere of ''Tori & Dean: Home Sweet Hollywood''. Following the acquisition of NBC Universal by Comcast and the last-minute replacement of its subscription channel Style Network with Esquire Network (which was originally intended to replace G4) on September 23, 2013, some of its acquired programs were dispersed to Oxygen.

In April 2014, as part of a gradual re-focusing of NBCU's women's pay-TV networks by new division head Bonnie Hammer, and the appointment of Frances Berwick as the head of Oxygen and sister network Bravo, it was revealed that Oxygen would undergo a shift in its programming strategy to focus on a "modern", young female audience. Berwick explained that the new slate, which included upcoming series such as ''Fix My Choir'', ''Funny Girls'', ''Nail'd It'', ''Sisterhood of Hip Hop'', ''Street Art Throwdown'', and planned spin-offs of ''Preachers of L.A.'', would "deliver on the freshness, authenticity, high emotional stakes and optimism that this demographic is looking for", and that many of the new programs would "appeal to things that are important in the lives of young, millennial women" and be "authentic". As part of the re-focusing, the network also introduced a new slogan, "Very Real".

In December 2016, it was reported that NBCUniversal was considering reformatting Oxygen as a true crime-oriented channel. Since 2015, the genre had seen growing interest, especially among young adult women. The network had introduced a primetime block known as ''Crime Time'' on Fridays through Mondays (anchored by series such as ''Snapped''), which had helped Oxygen see a 42% increase in total viewership, and a 22% increase among women 25–54. NBCUniversal had reportedly been in talks with Dick Wolf—producer of NBC's ''Law and Order'' and ''Chicago'' franchises—to take an equity stake in a re-branded channel that could be led by reruns of the programs. In January 2017, the network also began a foray into podcasting, with the true crime series ''Martinis & Murder''. In February 2017, NBCUniversal confirmed that it planned to re-format Oxygen with a focus on true crime programming aimed towards women. The change was accompanied by a larger re-branding later in the year, with a new logo featuring the Oxygen name rendered in the style of yellow police tape. Oxygen's new lineup was built largely around its existing library of unscripted crime-oriented programming (such as ''Snapped'' and its various spin-offs); NBCUniversal Lifestyle Networks president Frances Berwick explained that they had not ruled out adding off-network reruns of police procedurals, such as the ''Chicago'', ''CSI'' and ''NCIS'' franchises as well (with the latter two having already been aired by the network by that time). Berwick stated that the network had not determined the fate of the network's non-crime programming, such as ''Bad Girls Club'', after the full re-branding takes effect. During its upfront presentations, Oxygen unveiled other new crime programs that were in development for the upcoming season, such the new Dick Wolf series ''Criminal Confessions,'' and a docuseries on the murder of Jessica Chambers co-produced with NBCUniversal-funded BuzzFeed. Oxygen also acquired a new season of another Dick Wolf series, ''Cold Justice'' (which had been cancelled by TNT). In September 2017, Oxygen and USA Network acquired off-network reruns of ''Chicago P.D.'', which were added to their schedules in October 2017.