The overhead press (abbreviated OHP), also referred to as a shoulder press, military press, or simply the press, is a weight training exercise with many variations. It is typically performed while either standing or sitting sometimes also when squatting, in which a weight is pressed straight upwards from racking position until the arms are locked out overhead, while the legs, lower back and abs maintain balance. The exercise helps build muscular shoulders with bigger arms, and is one of the most difficult compound upper-body exercises. The world record overhead press was performed by Owhe Bruno in Russia in 1997. 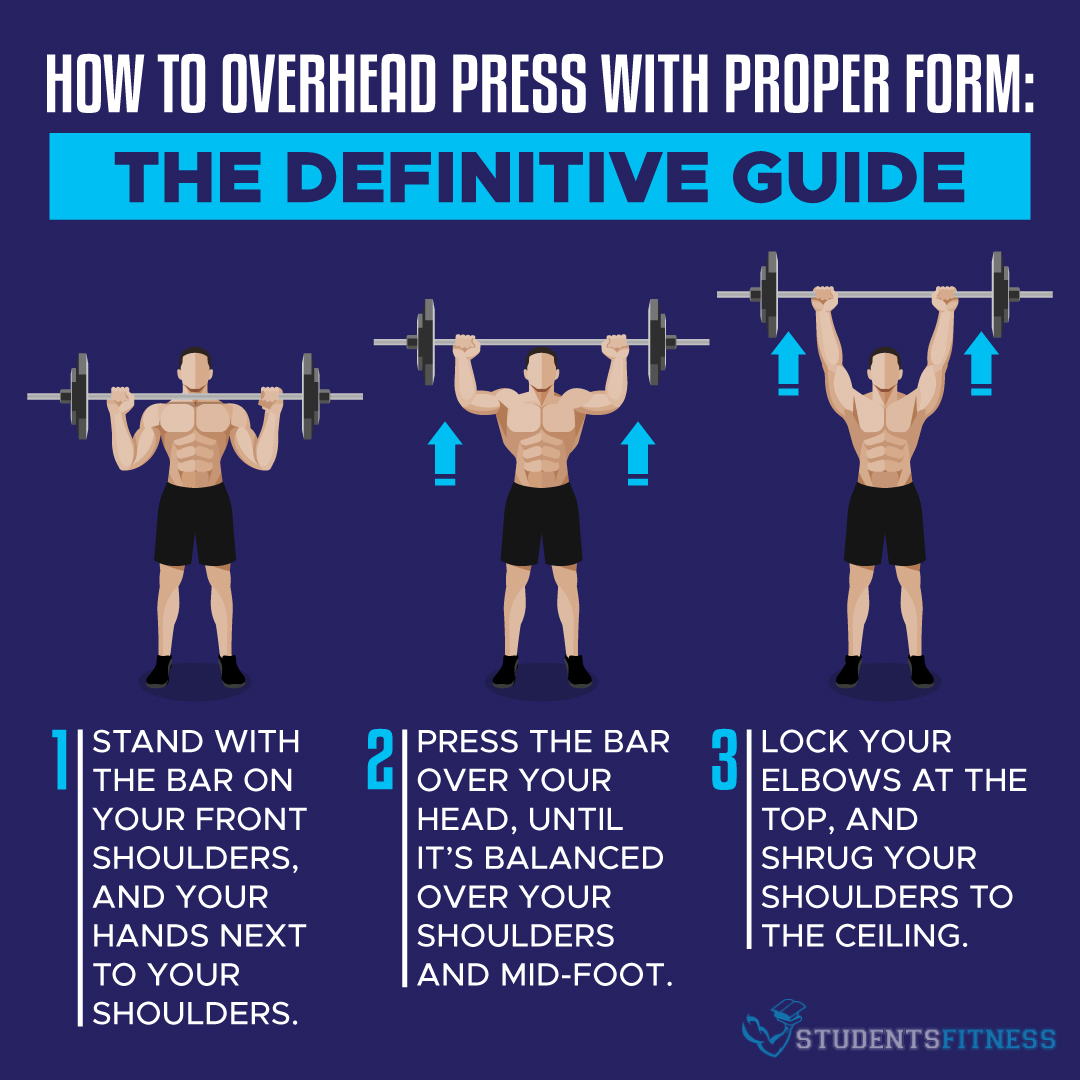 The overhead press is set up by taking a barbell or other weight and putting it in a racking position. This can be done by taking the weight from a rack or by cleaning the weight from the floor (clean and press). The weight is then pressed to overhead until the elbows are fully locked out. As the weight clears the head, the lifter leans forward slightly or comes directly under, in order to keep balance. As the weight is lowered back to the racking position and clears the head again, the lifter leans slightly back. The overhead press is a highly effective compound full-body exercise. The exercise can be done sitting or standing, with alternating arms or with a hammer grip in which the palms face each other. Performing it standing recruits many more muscle groups in order to maintain balance and support the lift, rather than performing it seated. Like the squat and deadlift, it can be thought of as a whole-body exercise, to some extent.

The overhead press can be performed with any type of weight/equipment, but is commonly performed with: * Barbell * Dumbbell * Kettlebell Out of those, the dumbbell and kettlebell provide unilateral qualities, and out of those, the kettlebell provides the most variety due to the grip attributes of the kettlebell. It provides a different way to get the most benefit out of the exercise. Over 50+ press variations can be created through changing of: * Grip * Angle * Stance * Etc.

Other variations of the overhead press are: *Arnold press: beginning a dumbbell press with forearms supinated, ending with forearms pronated. Named after Arnold Schwarzenegger. The Arnold Press in essence greatly increases the arryScott Press's range of motion by starting in a position close to the dumbbell curls' finishing position instead of the Scott Press's starting position of elbows pulled back and at or above the shoulder. *Behind-the-neck press: barbell on the trapezius vs. on the anterior deltoids. This variation presents risks to those lacking in shoulder mobility. Care should be taken to ensure adequate shoulder range of motion exists prior to undertaking this variation. *Bradford press: as you press, once the bar clears a few inches overhead it is slowly lowered behind the head then explosively reversed to the front and slowly lowered to the starting position. The 2 phases are commonly considered one repetition. Named after Jim Bradford. **"Z-press" is a variation on the dumbbell press: from a seated position, dumbbell held in one arm at the shoulder (looks similar to 'Z' shape from the side), and pressed upwards. Named after Strongman Zydrunas Savickas (Big Z). *Military press: Heels together with strict form with no pre-movement momentum. It is called the "Military Press" because this movement used to be the general indicator or test of one's strength in the military. The military press targets the deltoid muscles in the shoulders as well as the triceps. Additionally, it works the core and legs, which the lifter uses to help stabilize the weight. *Olympic press (clean and press): lift used in Olympic Weightlifting, consists of a clean, then pressing with no lower body movement, such as in the Push press. Discontinued after 1972 Olympics due to inconsistent judging criteria (such as should the lifter be allowed to bend backward slightly when pressing, should a leg drive be allowed). *One-handed press: pressing with one arm at a time. *Push press: using leg drive to press the weight up *Seated press: pressing while seated (commonly on a bench). The seated press can be performed using a Smith machine, but this is often considered inferior to the free-weight variant because of the lack of recruitment of auxiliary muscles and limited range of movement. *Sots press: pressing to overhead from a deep squat position. Created by Viktor Sots.

The deltoid muscle has a dynamic activation of about 90–120 degrees of abduction. Afterward, it has an almost static function during the remainder of the lift. The rest of the movement is mainly due to the contraction of trapezius muscle pars acendens, serratus anterior muscle and trapezius pars descendens. They work together to tilt the scapula to a position that makes the glenoid cavity point superiorly, enabling the last degrees of the abduction of the shoulder. Other contributing muscles include the supraspinatus muscle and biceps brachii muscle caput longum. The rotator cuff is also active to pull the caput humeri into the glenoid cavity and counteract the superior forces of caput humeri created by the deltoid. The triceps contribute to the extension of the elbow, and counteract the force from biceps caput longum.