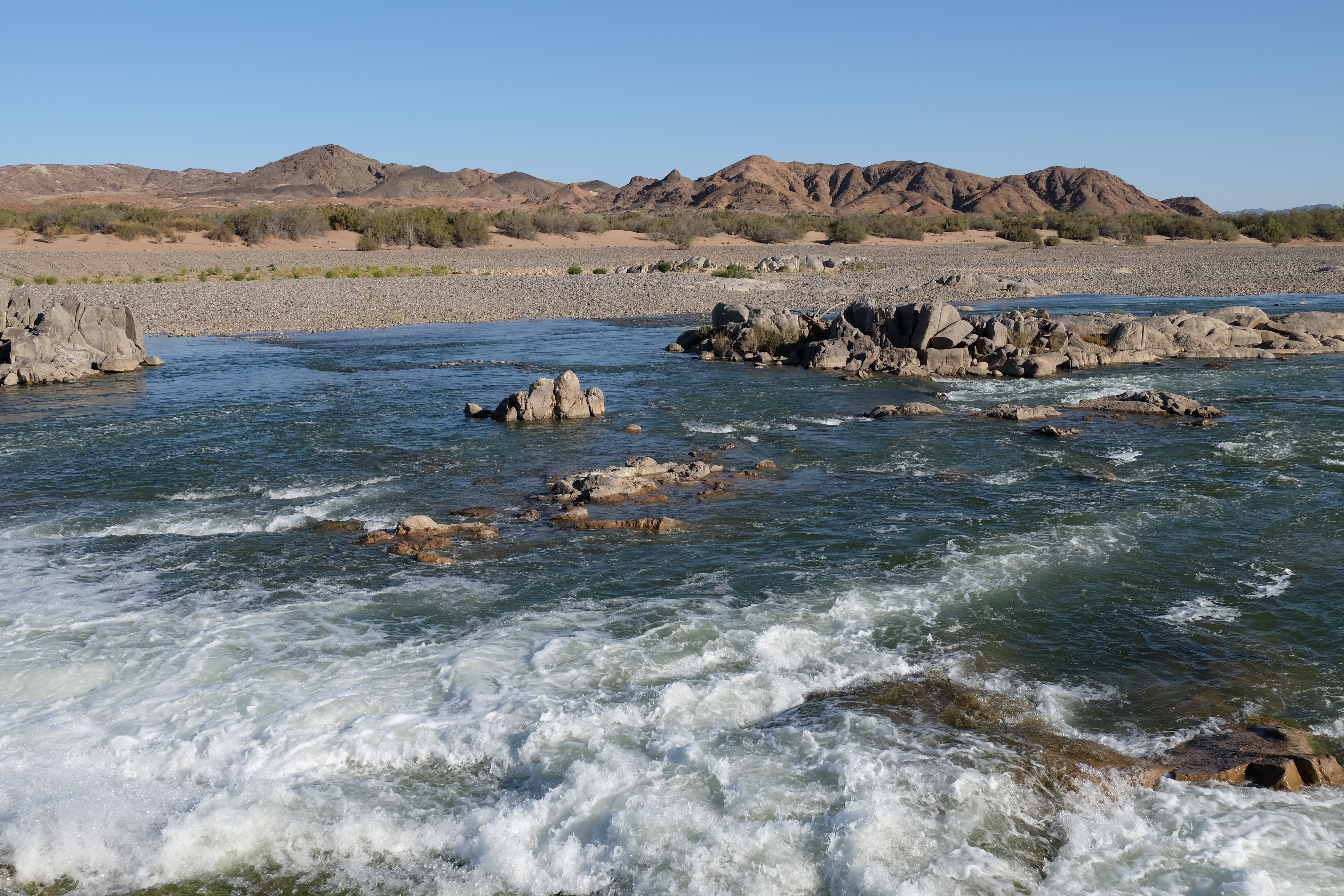 The Orange River (from Afrikaans/Dutch: ''Oranjerivier'') is a river in Southern Africa. It is the longest river within the borders of South Africa and the Orange River Basin extends extensively from Lesotho into South Africa and Namibia to the north. It rises in the Drakensberg mountains in Lesotho, flowing westwards through South Africa to the Atlantic Ocean. The river forms part of the international borders between South Africa and Lesotho and between South Africa and Namibia, as well as several provincial borders within South Africa. Except for Upington, it does not pass through any major cities. The Orange River plays an important role in the South African economy by providing water for irrigation and hydroelectric power. The river was named the Orange River in honour of the Dutch ruling family, the House of Orange, by the Dutch explorer Robert Jacob Gordon. Other names include simply the word for river, in Khoekhoegowab orthography written as !Garib, which is rendered in Afrikaans as Gariep River with the intrusion of a velar fricative in place of the alveolar click, Groote River (derived from Kai !Garib) or Senqu River (used in Lesotho), derived from ǂNū "Black".

The Orange rises in the Drakensberg mountains along the border between South Africa and Lesotho, about west of the Indian Ocean and at an altitude of over 3,000 m. The extremity of the Orange River inside Lesotho is known as the Senqu. Parts of the Senqu River freeze in winter because of the high altitude there. This creates droughts downstream, which mainly affect goat and cattle production. The Orange River then runs westward through South Africa, forming the south-western boundary of the Free State province. In this section, the river flows first into the Gariep Dam (the largest in the country), and later into the Vanderkloof Dam. From the border of Lesotho to below the Vanderkloof Dam, the river bed is deeply incised. Further downstream, the land is flatter, and the river is used extensively for irrigation. At the western point of the Free State, southwest of Kimberley, the Orange meets with its main tributary, the Vaal River, which itself forms much of the northern border of the province. From here, the river flows further westward through the arid wilderness of the southern Kalahari region and Namaqualand in the Northern Cape Province to meet with Namibia at 20°E longitude. From here, it flows westward for 550 km, forming the international border between the province and Namibia's ǁKaras Region. On the border, the river passes the town of Vioolsdrif, the main border post between South Africa and Namibia. In the last of its course, the Orange receives many intermittent streams, and several large wadis lead into it. In this section, the Namib Desert terminates on the north bank of the river, so under normal circumstances, the volume of water added by these tributaries is negligible. Here, the bed of the river is once again deeply incised. The Augrabies Falls are located on this section of the Orange, where the river descends 122 m (400 ft) in a course of . The Orange empties into the Atlantic Ocean between the small towns of Oranjemund (meaning "Orange mouth") in Namibia and Alexander Bay in South Africa, about equidistant between Walvis Bay and Cape Town. Some from its mouth, it is completely obstructed by rapids and sand bars and is generally not navigable for long stretches. The river has a total length of .

in full flow In the dry winter, the volume of the water in the river is considerably reduced because of the rapid run-off and evaporation. At the source of the Orange, the rainfall is about 2,000 mm per annum, but precipitation decreases as the river flows westward; at its mouth, the rainfall is less than 50 mm per year. The factors that support evaporation, though, tend to increase in a westerly direction. In the wet season (summer), the Orange river becomes an impetuous, brown torrent. The huge mass of sediment carried constitutes a long-term threat to all engineering projects on the river. The total catchment of the Orange River (including the Vaal) extends over 973,000 km2, i.e. equivalent to about 77% of the land area of South Africa (1,268,5358 km2). Around 366,000 km2 (38%), however, are situated outside the country in Lesotho, Botswana, and Namibia.


Name of the river

Some of the earliest precolonial inhabitants called the river ''ǂNūǃarib'', referring to its black colour, or sometimes just ''Kai !Arib'' ("Great River"), from which is derived the Afrikaans version ''Gariep'', and translation "Groote Rivier". The early Dutch name for the river was just that translation, Groote Rivier, meaning "Great River". The river was named the Orange River by Colonel Robert Gordon, commander of the United East India Company (VOC) garrison at Cape Town, on a trip to the interior in 1779. Gordon named the river in honor of William V of Orange. A popular but incorrect belief is that the river was named after the supposedly orange color of its water, as opposed to the color its tributary, the Vaal River, itself derived from the name ǀHaiǃarib "pale river" (''vaal'' being Afrikaans for pale or grey). Since the end of apartheid, the name "Gariep" has had greater favour in official correspondence in South Africa, although the name "Orange" has greater international recognition. In Lesotho, where the river rises, it is known as the Senqu River, derived from the original Khoemana name. taken from a fluorspar-rich hill overlooking a bend in the River, which was in flood due to above-normal rains

The Eastern Cape Geographical Names Committee has advertised its intention to consider a name change from the colonial name, for that portion of the river that forms the border between the Eastern Cape and the Free State, with suggestions being IGqili or Senqu.