Ohio is a state in the Midwestern region of the United States. Of the fifty states, it is the 34th-largest by area, and with a population of nearly 11.7 million, is the seventh-most populous and tenth-most densely populated. The state's capital and largest city is Columbus, with the Columbus metro area, Greater Cincinnati, and Greater Cleveland being the largest metropolitan areas. Ohio is bordered by Lake Erie to the north, Pennsylvania to the east, West Virginia to the southeast, Kentucky to the southwest, Indiana to the west, and Michigan to the northwest. Ohio is historically known as the "Buckeye State" after its Ohio buckeye trees, and Ohioans are also known as "Buckeyes". The state takes its name from the Ohio River, whose name in turn originated from the Seneca word '' ohiːyo'', meaning "good river", "great river", or "large creek". Ohio arose from the lands west of Appalachia that were contested from colonial times through the Northwest Indian Wars of the late 18th century. It was partitioned from the resulting Northwest Territory, which was the first frontier of the new United States, and became the 17th state admitted to the Union on March 1, 1803, and the first under the Northwest Ordinance. Ohio was the first post-colonial free state admitted to the union, and became one of the earliest and most influential industrial powerhouses in the 20th century; although it has transitioned to a more information- and service-based economy in the 21st century, Ohio remains an industrial state, ranking seventh in GDP as of 2019, with the third largest manufacturing sector and second largest automobile production. The government of Ohio is composed of the executive branch, led by the governor; the legislative branch, consisting of the bicameral Ohio General Assembly; and the judicial branch, led by the state Supreme Court. Ohio occupies 16 seats in the United States House of Representatives. The state is known for its status as both a swing state and a bellwether in national elections. Seven presidents of the United States have come from Ohio, the most of any state; this has led to it receiving the moniker "the Mother of Presidents".

Ohio's geographic location has proven to be an asset for economic growth and expansion. Because Ohio links the Northeast to the Midwest, much cargo and business traffic passes through its borders along its well-developed highways. Ohio has the nation's 10th largest highway network and is within a one-day drive of 50% of North America's population and 70% of North America's manufacturing capacity. To the north, Ohio has of coastline with Lake Erie, which allows for numerous cargo ports such as Cleveland and Toledo. Ohio's southern border is defined by the Ohio River. Ohio's neighbors are Pennsylvania to the east, Michigan to the northwest, Lake Erie to the north, Indiana to the west, Kentucky on the south, and West Virginia on the southeast. Ohio's borders were defined by metes and bounds in the Enabling Act of 1802 as follows: Ohio is bounded by the Ohio River, but nearly all of the river itself belongs to Kentucky and West Virginia. In 1980, the U.S. Supreme Court held that, based on the wording of the cessation of territory by Virginia (which at the time included what is now Kentucky and West Virginia), the boundary between Ohio and Kentucky (and, by implication, West Virginia) is the northern low-water mark of the river as it existed in 1792. Ohio has only that portion of the river between the river's 1792 low-water mark and the present high-water mark. The border with Michigan has also changed, as a result of the Toledo War, to angle slightly northeast to the north shore of the mouth of the Maumee River. Much of Ohio features glaciated till plains, with an exceptionally flat area in the northwest being known as the Great Black Swamp. This glaciated region in the northwest and central state is bordered to the east and southeast first by a belt known as the glaciated Allegheny Plateau, and then by another belt known as the unglaciated Allegheny Plateau. Most of Ohio is of low relief, but the unglaciated Allegheny Plateau features rugged hills and forests. The rugged southeastern quadrant of Ohio, stretching in an outward bow-like arc along the Ohio River from the West Virginia Panhandle to the outskirts of Cincinnati, forms a distinct socio-economic unit. Geologically similar to parts of West Virginia and southwestern Pennsylvania, this area's coal mining legacy, dependence on small pockets of old manufacturing establishments, and distinctive regional dialect set this section off from the rest of the state. In 1965 the United States Congress passed the Appalachian Regional Development Act, an attempt to "address the persistent poverty and growing economic despair of the Appalachian Region". This act defines 29 Ohio counties as part of Appalachia. While 1/3 of Ohio's land mass is part of the federally defined Appalachian region, only 12.8% of Ohioans live there (1.476 million people.) 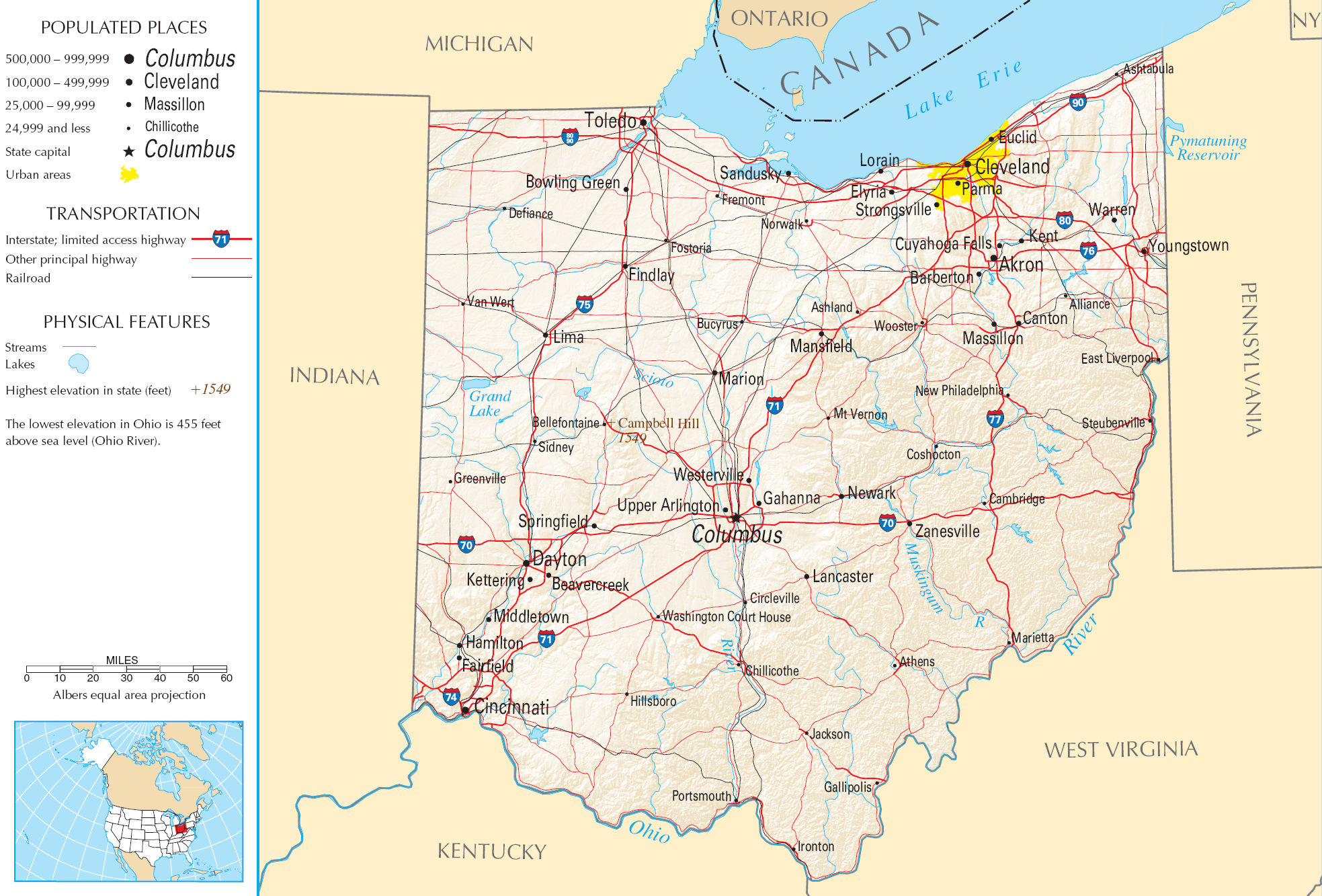 Significant rivers within the state include the Cuyahoga River, Great Miami River, Maumee River, Muskingum River, and Scioto River. The rivers in the northern part of the state drain into the northern Atlantic Ocean via Lake Erie and the St. Lawrence River, and the rivers in the southern part of the state drain into the Gulf of Mexico via the Ohio River and then the Mississippi. The worst weather disaster in Ohio history occurred along the Great Miami River in 1913. Known as the Great Dayton Flood, the entire Miami River watershed flooded, including the downtown business district of Dayton. As a result, the Miami Conservancy District was created as the first major flood plain engineering project in Ohio and the United States. Grand Lake St. Marys in the west-central part of the state was constructed as a supply of water for canals in the canal-building era of 1820–1850. This body of water, over , was the largest artificial lake in the world when completed in 1845. Ohio's canal-building projects were not the economic fiasco that similar efforts were in other states. Some cities, such as Dayton, owe their industrial emergence to location on canals, and as late as 1910 interior canals carried much of the bulk freight of the state.

The climate of Ohio is a humid continental climate (Köppen climate classification ''Dfa/Dfb'') throughout most of the state, except in the extreme southern counties of Ohio's Bluegrass region section, which are located on the northern periphery of the humid subtropical climate (''Cfa'') and Upland South region of the United States. Summers are typically hot and humid throughout the state, while winters generally range from cool to cold. Precipitation in Ohio is moderate year-round. Severe weather is not uncommon in the state, although there are typically fewer tornado reports in Ohio than in states located in what is known as the Tornado Alley. Severe lake effect snowstorms are also not uncommon on the southeast shore of Lake Erie, which is located in an area designated as the Snowbelt. Although predominantly not in a subtropical climate, some warmer-climate flora and fauna do reach well into Ohio. For instance, some trees with more southern ranges, such as the blackjack oak, ''Quercus marilandica'', are found at their northernmost in Ohio just north of the Ohio River. Also evidencing this climatic transition from a subtropical to continental climate, several plants such as the Southern magnolia ''(Magnolia grandiflora)'', Albizia julibrissin (mimosa), Crape Myrtle, and even the occasional Needle Palm are hardy landscape materials regularly used as street, yard, and garden plantings in the Bluegrass region of Ohio; but these same plants will simply not thrive in much of the rest of the state. This interesting change may be observed while traveling through Ohio on Interstate 75 from Cincinnati to Toledo; the observant traveler of this diverse state may even catch a glimpse of Cincinnati's common wall lizard, one of the few examples of permanent "subtropical" fauna in Ohio. Due to flooding resulting in severely damaged highways, Governor Mike DeWine declared a state of emergency in 37 Ohio counties in 2019.

Although few have registered as noticeable to the average resident, more than 200 earthquakes with a magnitude of 2.0 or higher have occurred in Ohio since 1776. The Western Ohio Seismic Zone and a portion of the Southern Great Lakes Seismic Zone are located in the state, and numerous faults lie under the surface.