) | image_map = Nova Scotia in Canada 2.svg | Label_map = yes | coordinates = | official_lang = English (''de facto'') | RegionalLang = French | capital = Halifax | largest_metro = Halifax County, Nova Scotia | largest_city = Halifax, Nova Scotia | Premier = Iain Rankin | PremierParty = Liberal | Viceroy = Arthur LeBlanc | ViceroyType = Lieutenant Governor | Legislature = Nova Scotia House of Assembly | PCI = 39,092 | area_rank = 12th | area_total_km2 = 55284 | area_land_km2 = 52942 | area_water_km2 = 2342 | PercentWater = 4.2 | population_demonym = Nova Scotian, Bluenoser | population_rank = 7th | population_total = 923598 | population_ref = | population_as_of = 2016 | population_est = 979449 | pop_est_as_of = 2021 Q1 | pop_est_ref = | DensityRank = 2nd | Density_km2 = 17.4 | GDP_year = 2016 | GDP_total =  billion | GDP_rank = 7th | GDP_per_capita = | GDP_per_capita_rank = 12th | AdmittanceOrder = 1st, with Ontario, Quebec, New Brunswick | AdmittanceDate = 1 July 1867 | HouseSeats = 11 | SenateSeats = 10 | timezone1 = Atlantic | utc_offset1 = -04:00 | PostalAbbreviation = NS | PostalCodePrefix = B | iso_code = CA-NS | website = novascotia.ca | flower = Mayflower | tree = Red spruce | bird = Osprey |HDI=0.895 — Very high|HDI_rank=11th|HDI_year=2018 Nova Scotia ( ) is one of the thirteen provinces and territories of Canada. It is one of the three Maritime provinces and one of the four Atlantic provinces. Nova Scotia is Latin for "New Scotland". Most of the population are native English-speakers. With a population of 923,598 as of 2016, it is the most populous of Canada's four Atlantic provinces. It is the country's second-most densely populated province and second-smallest province by area, both after neighbouring Prince Edward Island. Its area of includes Cape Breton Island and 3,800 other coastal islands. The peninsula that makes up Nova Scotia's mainland is connected to the rest of North America by the Isthmus of Chignecto, on which the province's land border with New Brunswick is located. The province borders the Bay of Fundy to the west and the Atlantic Ocean to the south and east, and is separated from Prince Edward Island and the island of Newfoundland by the Northumberland and Cabot straits, respectively. The land that comprises what is now Nova Scotia has been inhabited by the indigenous Miꞌkmaq people for thousands of years. France's first settlement in North America, , was established in 1605 and intermittently served in various locations as the capital of the French colony of Acadia for over a hundred years. The Fortress of Louisbourg was a key focus point in the struggle between the British and French for control of the area, changing hands numerous times until France relinquished its claims with the Treaty of Paris in 1763. During the American Revolutionary War, thousands of Loyalists settled in Nova Scotia. In 1848, Nova Scotia became the first British colony to achieve responsible government, and it federated in July 1867 with New Brunswick and the Province of Canada (now Ontario and Quebec) to form what is now the country of Canada. Nova Scotia's capital and largest city is Halifax, which today is home to about 45 percent of the province's population. Halifax is the thirteenth-largest census metropolitan area in Canada, the largest city in Atlantic Canada, and Canada's second-largest coastal city after Vancouver.

"Nova Scotia" means "New Scotland" in Latin and is the recognized English-language name for the province. In both French and Scottish Gaelic, the province is directly translated as "New Scotland" (French: '. Gaelic: '). In general, Romance and Slavic languages use a direct translation of "New Scotland", while most other languages use direct transliterations of the Latin / English name. The province was first named in the 1621 Royal Charter granting to Sir William Alexander in 1632 the right to settle lands including modern Nova Scotia, Cape Breton Island, Prince Edward Island, New Brunswick and the Gaspé Peninsula.

Nova Scotia has many ancient fossil-bearing rock formations. These formations are particularly rich on the Bay of Fundy's shores. Blue Beach near Hantsport, Joggins Fossil Cliffs, on the Bay of Fundy's shores, has yielded an abundance of Carboniferous-age fossils. Wasson's Bluff, near the town of Parrsboro, has yielded both Triassic- and Jurassic-age fossils. The highest point is White Hill at 533m (1,749 ft) above sea level, situated amongst the Cape Breton Highlands in the far north of the province. The province contains 5,400 lakes.

Nova Scotia lies in the mid-temperate zone and, although the province is almost surrounded by water, the climate is closer to continental climate rather than maritime. The winter and summer temperature extremes of the continental climate are moderated by the ocean. However, winters are cold enough to be classified as continental—still being nearer the freezing point than inland areas to the west. The Nova Scotian climate is in many ways similar to the central Baltic Sea coast in Northern Europe, only wetter and snowier. This is true although Nova Scotia is some fifteen parallels further south. Areas not on the Atlantic coast experience warmer summers more typical of inland areas, and winter lows are a little colder. On 12 August 2020, the community of Grand Étang, famous for its Les Suêtes winds recorded a balmy overnight low of 23.3 Celcius Described on the provincial vehicle licence plate as Canada's Ocean Playground, Nova Scotia is surrounded by four major bodies of water: the Gulf of Saint Lawrence to the north, the Bay of Fundy to the west, the Gulf of Maine to the southwest, and the Atlantic Ocean to the east.

The province includes regions of the Mi'kmaq nation of Mi'kma'ki ('). (The territory of the Nation of Mi'kma'ki also includes the Maritimes, parts of Maine, Newfoundland and the Gaspé Peninsula.) The Mi'kmaq people are among the large Algonquian-language family and inhabited Nova Scotia at the time the first European colonists arrived.

The first Europeans to settle in what is now Nova Scotia were the French, who arrived in 1604, and Catholic Mi'kmaq and Acadians formed the majority of the population of the colony for the next 150 years. In 1605, French colonists established the first permanent European settlement in the future Canada (and the first north of Florida) at Port Royal, founding what would become known as Acadia. Warfare was a notable feature in Nova Scotia during the 17th and 18th centuries. During the first 80 years the French and Acadians lived in Nova Scotia, nine significant military clashes took place as the English and Scottish (later British), Dutch and French fought for possession of the area. These encounters happened at Port Royal, Saint John, Cap de Sable (present-day Port La Tour, Nova Scotia), Jemseg (1674 and 1758) and Baleine (1629). The Acadian Civil War took place from 1640 to 1645. Beginning with King William's War in 1688, a series of six wars took place between the English/British and the French, with Nova Scotia being a consistent theatre of conflict between the two powers. 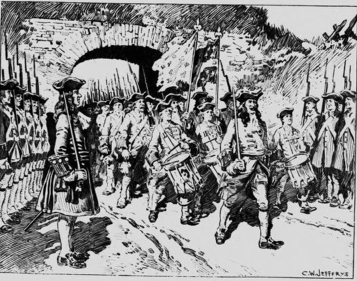 Hostilities between the British and French resumed from 1702 to 1713, known as Queen Anne's War. The British siege of Port Royal took place in 1710, ending French-rule in peninsular Acadia. The subsequent signing of the Treaty of Utrecht in 1713 formally recognized this, while returning Cape Breton Island (') and Prince Edward Island (') to the French. Despite the British conquest of Acadia in 1710, Nova Scotia remained primarily occupied by Catholic Acadians and Mi'kmaq, who confined British forces to Annapolis and to Canso. Present-day New Brunswick then still formed a part of the French colony of Acadia. Immediately after the capture of Port Royal in 1710, Francis Nicholson announced it would be renamed Annapolis Royal in honour of Queen Anne. As a result of Father Rale's War (1722–1725), the Mi'kmaq signed a series of treaties with Great Britain in 1725. The Mi'kmaq signed a treaty of "submission" to the British crown. However, conflict between the Acadians, Mi'kmaq, French, and the British persisted in the following decades with King George's War (1744–1748). Father Le Loutre's War (1749–1755) began when Edward Cornwallis arrived to establish Halifax with 13 transports on 21 June 1749. A General Court, made up of the governor and the Council, was the highest court in the colony at the time.