The MessagePad is a discontinued series of personal digital assistant devices developed by Apple Computer Inc. for the Newton platform in 1993. Some electronic engineering and the manufacture of Apple's MessagePad devices was undertaken in Japan by the Sharp Corporation. The devices were based on the ARM 610 RISC processor and all featured handwriting recognition software and were developed and marketed by Apple. The devices ran the Newton OS.

With the MessagePad 120 with Newton OS 2.0, the Newton Keyboard by Apple became available, which can also be used via the dongle on Newton devices with a Newton InterConnect port, most notably the Apple MessagePad 2000/2100 series, as well as the Apple eMate 300. Newton devices featuring Newton OS 2.1 or higher can be used with the screen turned horizontally ("landscape") as well as vertically ("portrait"). A change of a setting rotates the contents of the display by 90, 180 or 270 degrees. Handwriting recognition still works properly with the display rotated, although display calibration is needed when rotation in any direction is used for the first time or when the Newton device is reset. 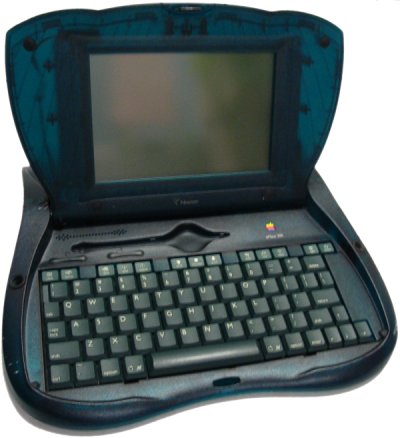 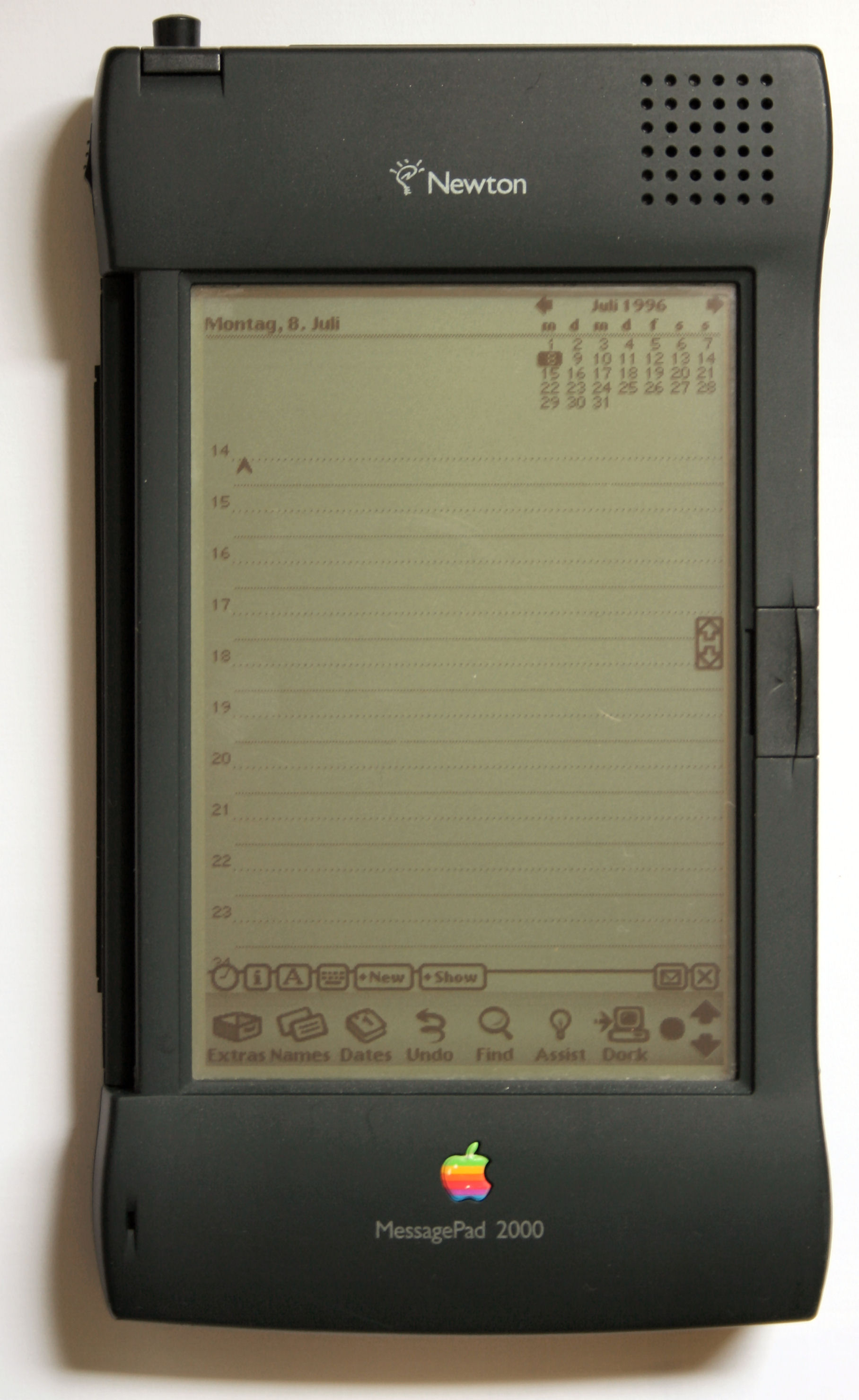 In initial versions (Newton OS 1.x) the handwriting recognition gave extremely mixed results for users and was sometimes inaccurate. The original handwriting recognition engine was called Calligrapher, and was licensed from a Russian company called Paragraph International. Calligrapher's design was quite sophisticated; it attempted to learn the user's natural handwriting, using a database of known words to make guesses as to what the user was writing, and could interpret writing anywhere on the screen, whether hand-printed, in cursive, or a mix of the two. By contrast, Palm Pilot's Graffiti had a less sophisticated design than Calligrapher, but was sometimes found to be more accurate and precise due to its reliance on a fixed, predefined stroke alphabet. The stroke alphabet used letter shapes which resembled standard handwriting, but which were modified to be both simple and very easy to differentiate. Palm Computing also released two versions of Graffiti for Newton devices. The Newton version sometimes performed better and could also show strokes as they were being written as input was done on the display itself, rather than on a silkscreen area. For editing text, Newton had a very intuitive system for handwritten editing, such as scratching out words to be deleted, circling text to be selected, or using written carets to mark inserts. Later releases of the Newton operating system retained the original recognizer for compatibility, but added a hand-printed-text-only (not cursive) recognizer, called "Rosetta", which was developed by Apple, included in version 2.0 of the Newton operating system, and refined in Newton 2.1. Rosetta is generally considered a significant improvement and many reviewers, testers, and most users consider the Newton 2.1 handwriting recognition software better than any of the alternatives even 10 years after it was introduced. Recognition and computation of handwritten horizontal and vertical formulas such as "1 + 2 =" was also under development but never released. However, users wrote similar programs which could evaluate mathematical formulas using the Newton OS Intelligent Assistant, a unique part of every Newton device. The handwriting recognition and parts of the user interface for the Newton are best understood in the context of the broad history of pen computing, which is quite extensive. A vital feature of the Newton handwriting recognition system is the modeless error correction. That is, correction done in situ without using a separate window or widget, using a minimum of gestures. If a word is recognized improperly, the user could double-tap the word and a list of alternatives would pop up in a menu under the stylus. Most of the time, the correct word will be in the list. If not, a button at the bottom of the list allows the user to edit individual characters in that word. Other pen gestures could do such things as transpose letters (also in situ). The correction popup also allowed the user to revert to the original, un-recognized letter shapes - this would be useful in note-taking scenarios if there was insufficient time to make corrections immediately. To conserve memory and storage space, alternative recognition hypotheses would not be saved indefinitely. If the user returned to a note a week later, for example, they would only see the best match. Error correction in many current handwriting systems provides such functionality but adds more steps to the process, greatly increasing the interruption to a user's workflow that a given correction requires.

Text could also be entered by tapping with the stylus on a small on-screen pop-up QWERTY virtual keyboard, although more layouts were developed by users. Newton devices could also accept free-hand "Sketches", "Shapes", and "Ink Text", much like a desktop computer graphics tablet. With "Shapes", Newton could recognize that the user was attempting to draw a circle, a line, a polygon, etc., and it would clean them up into perfect vector representations (with modifiable control points and defined vertices) of what the user was attempting to draw. "Shapes" and "Sketches" could be scaled or deformed once drawn. "Ink text" captured the user's free-hand writing but allowed it to be treated somewhat like recognized text when manipulating for later editing purposes ("ink text" supported word wrap, could be formatted to be bold, italic, etc.). At any time a user could also direct their Newton device to recognize selected "ink text" and turn it into recognized text (deferred recognition). A Newton note (or the notes attached to each contact in Names and each Dates calendar or to-do event) could contain any mix of interleaved text, Ink Text, Shapes, and Sketches. While the Newton offered handwriting recognition training and would clean up sketches into vector shapes, both were unreliable and required much rewriting and redrawing. The most reliable application of the Newton was collecting and organizing address and phone numbers. While handwritten messages could be stored, they could not be easily filed, sorted or searched. While the technology was a probable cause for the failure of the device (which otherwise met or exceeded expectations), the technology has been instrumental in producing the future generation of handwriting software that realizes the potential and promise that began in the development of Newton-Apple's Ink Handwriting Recognition.

The MessagePad 100 series of devices used Macintosh's proprietary serial ports—round Mini-DIN 8 connectors. The MessagePad 2000/2100 models (as well as the eMate 300) have a small, proprietary ''Newton InterConnect'' port. However, the development of the Newton hardware/software platform was canceled by Steve Jobs on February 27, 1998, so the InterConnect port, while itself very advanced, can only be used to connect a serial dongle. A prototype multi-purpose InterConnect device containing serial, audio in, audio out, and other ports was also discovered. In addition, all Newton devices have infrared connectivity, initially only the Sharp ASK protocol, but later also IrDA, though the Sharp ASK protocol was kept in for compatibility reasons. Unlike the Palm Pilot, all Newton devices are equipped with a standard PC Card expansion slot (two on the 2000/2100). This allows native modem and even Ethernet connectivity; Newton users have also written drivers for 802.11b wireless networking cards and ATA-type flash memory cards (including the popular CompactFlash format), as well as for Bluetooth cards. Newton can also dial a phone number through the built-in speaker of the Newton device by simply holding a telephone handset up to the speaker and transmitting the appropriate tones. Fax and printing support is also built in at the operating system level, although it requires peripherals such as parallel adapters, PCMCIA cards, or serial modems, the most notable of which is the lightweight Newton Fax Modem released by Apple in 1993. It is powered by 2 AA batteries, and can also be used with a power adapter. It provides data transfer at 2,400 bit/s, and can also send and receive fax messages at 9,600 and 4,800 bit/s respectively.

The original Apple MessagePad and MessagePad 100 used four AAA batteries. They were eventually replaced by AA batteries with the release of the Apple MessagePad 110. The use of 4 AA NiCd (MessagePad 110, 120 and 130) and 4x AA NiMH cells (MP2x00 series, eMate 300) give a runtime of up to 30 hours (MP2100 with two 20 MB Linear Flash memory PC Cards, no backlight usage) and up to 24 hours with backlight on. While adding more weight to the handheld Newton devices than AAA batteries or custom battery packs, the choice of an easily replaceable/rechargeable cell format gives the user a still unsurpassed runtime and flexibility of power supply. This, together with the flash memory used as internal storage starting with the Apple MessagePad 120 (if all cells lost their power, no data was lost due to the non-volatility of this storage), gave birth to the slogan "Newton never dies, it only gets new batteries".

Fourteen months after Sculley demoed it at the May 1992, Chicago CES, the MessagePad was first offered for sale on August 2, 1993, at the Boston Macworld Expo. The hottest item at the show, it cost $900. 50,000 MessagePads were sold in the device's first three months on the market.