Click Here for Items Related To - Newfoundland and Labrador

The name "New founde lande" was uttered by King Henry VII about the land explored by the Cabots. In Portuguese it is , which literally means "new land" which is also the French name for the Province's island region (). The name "Terra Nova" is in wide use on the island (e.g. Terra Nova National Park). The influence of early Portuguese exploration is also reflected in the name of Labrador, which derives from the surname of the Portuguese navigator . Labrador's name in the Inuttitut/Inuktitut language (spoken in Nunatsiavut) is (ᓄᓇᑦᓱᐊᒃ), meaning "the big land" (a common English nickname for Labrador). Newfoundland's Inuttitut/Inuktitut name is (ᐃᒃᑲᕈᒥᒃᓗᐊᒃ) meaning "place of many shoals".

Newfoundland and Labrador is the most easterly province in Canada, and is at the north-eastern corner of North America. The Strait of Belle Isle separates the province into two geographical parts: Labrador, which is a large area of mainland Canada, and Newfoundland, an island in the Atlantic Ocean. The province also includes over 7,000 tiny islands. Newfoundland is roughly triangular. Each side is about long, and its area is . Newfoundland and its neighbouring small islands (excluding French possessions) have an area of . Newfoundland extends between latitudes 46°36′N and 51°38′N. Labrador is also roughly triangular in shape: the western part of its border with Quebec is the drainage divide of the Labrador Peninsula. Lands drained by rivers that flow into the Atlantic Ocean are part of Labrador, and the rest belongs to Quebec. Most of Labrador's southern boundary with Quebec follows the 52nd parallel of latitude. Labrador's extreme northern tip, at 60°22′N, shares a short border with Nunavut on Killiniq Island. Labrador's area (including associated small islands) is . Together, Newfoundland and Labrador make up 4.06% of Canada's area, with a total area of . 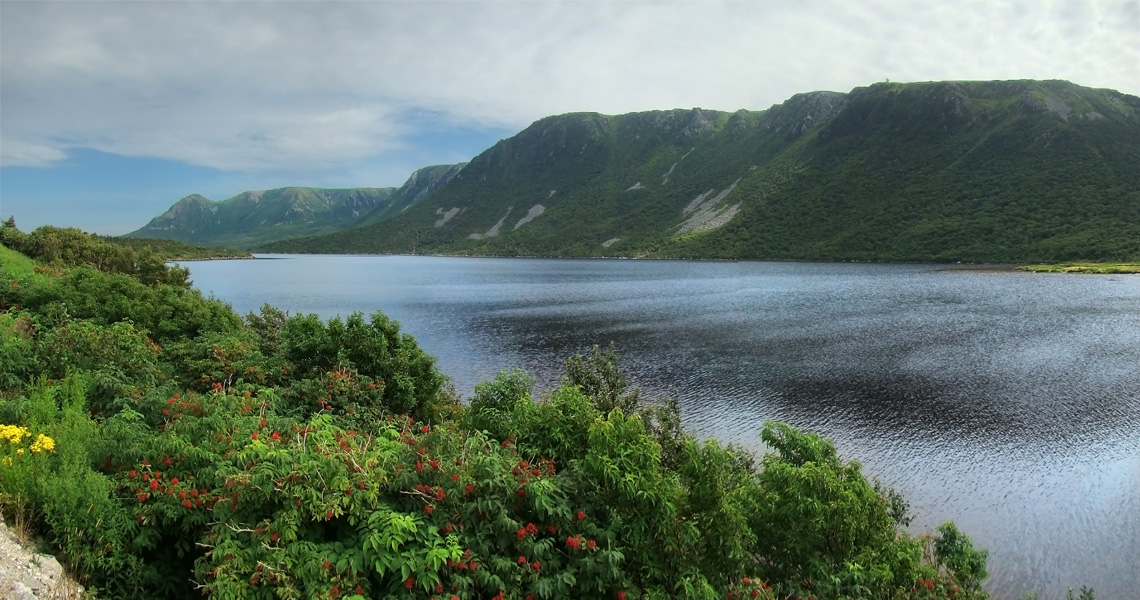 Labrador is the easternmost part of the Canadian Shield, a vast area of ancient metamorphic rock comprising much of northeastern North America. Colliding tectonic plates have shaped much of the geology of Newfoundland. Gros Morne National Park has a reputation as an outstanding example of tectonics at work, and as such has been designated a World Heritage Site. The Long Range Mountains on Newfoundland's west coast are the northeasternmost extension of the Appalachian Mountains. The north-south extent of the province (46°36′N to 60°22′N), prevalent westerly winds, cold ocean currents and local factors such as mountains and coastline combine to create the various climates of the province.

Most of Newfoundland has a humid continental climate (Dfb under the Köppen climate classification system): cool summer subtype. Newfoundland and Labrador has a wide range of climates and weather, due to its geography. The island of Newfoundland spans 5 degrees of latitude, comparable to the Great Lakes. The province has been divided into six climate types, but broadly Newfoundland has a cool summer subtype of a humid continental climate, which is greatly influenced by the sea since no part of the island is more than 100 km (62 mi) from the ocean. Northern Labrador is classified as a polar tundra climate, southern Labrador has a subarctic climate.

Monthly average temperatures, rainfall and snowfall for four places are shown in the attached graphs. St. John's represents the east coast, Gander the interior of the island, Corner Brook the west coast of the island and Wabush the interior of Labrador. Climate data for 56 places in the province is available from Environment Canada. The data for the graphs is the average over thirty years. Error bars on the temperature graph indicate the range of daytime highs and night time lows. Snowfall is the total amount that fell during the month, not the amount accumulated on the ground. This distinction is particularly important for St. John's, where a heavy snowfall can be followed by rain, so no snow remains on the ground. Surface water temperatures on the Atlantic side reach a summer average of inshore and offshore to winter lows of inshore and offshore. Sea temperatures on the west coast are warmer than Atlantic side by 1 to 3 °C (1 to 5 °F). The sea keeps winter temperatures slightly higher and summer temperatures a little lower on the coast than inland. The maritime climate produces more variable weather, ample precipitation in a variety of forms, greater humidity, lower visibility, more clouds, less sunshine, and higher winds than a continental climate.

Human habitation in Newfoundland and Labrador can be traced back about 9,000 years. The Maritime Archaic peoples were groups of Archaic cultures of sea-mammal hunters in the subarctic.