The New York Yankees are an American professional baseball team based in the New York City borough of the Bronx. They compete in Major League Baseball (MLB) as a member club of the American League (AL) East division. They are one of two major league clubs based in New York City, the other being the National League's (NL) New York Mets. The Yankees began play in the season as the Baltimore Orioles (no relation to the modern Baltimore Orioles). In 1903, Frank Farrell and Bill Devery purchased the franchise after it ceased operations and moved it to New York City, renaming the club the New York Highlanders. The Highlanders were officially renamed the New York Yankees in . The team is owned by Yankee Global Enterprises, an LLC that is controlled by the family of the late George Steinbrenner, who purchased the team in 1973. Brian Cashman is the team's general manager, and Aaron Boone is the team's field manager. The team's home games were played at the original Yankee Stadium from 1923 to 1973 and from 1976 to 2008. In 1974 and 1975, the Yankees shared Shea Stadium with the Mets, in addition to the New York Jets and the New York Giants. In 2009, they moved into a new ballpark of the same name that was constructed adjacent to the previous facility, which was closed and demolished. The team is perennially among the leaders in MLB attendance. Arguably the most successful professional sports team in the United States, the Yankees have won 19 American League East Division titles, 40 American League pennants, and 27 World Series championships, all of which are MLB records. The team has won more titles than any other franchise in the four major North American sports leagues - after briefly trailing the NHL's Montreal Canadiens by one or two titles in the 1990s. Forty-four Yankees players and 11 Yankees managers have been inducted into the National Baseball Hall of Fame, including Babe Ruth, Lou Gehrig, Joe DiMaggio, Mickey Mantle, Yogi Berra, Whitey Ford, Mariano Rivera, and Derek Jeter, with Rivera and Jeter having the two highest vote percentages of all Hall of Fame members. According to ''Forbes'', the Yankees are the second-highest valued sports franchise in the United States and the second in the world, with an estimated value of approximately $5 billion. The team has garnered enormous popularity and a dedicated fanbase, as well as widespread enmity from fans of other MLB teams. The team's rivalry with the Boston Red Sox is one of the most well-known rivalries in North American sports. From 1903 to 2020, the Yankees' overall win-loss record is 10,411–7,867 (a winning percentage).

In 1900, Ban Johnson, the president of a minor league known as the Western League (1894–1899), changed the Western League name to the American League (AL) and asked the National League to classify it as a major league. Johnson held that his league would operate in friendly terms with the National League, but the National League ridiculed the plan. Johnson declared official major league status for his league in 1901. Plans to add a team in New York City were blocked by the NL's New York Giants. A team was instead placed in Baltimore, Maryland, in 1901 named the Orioles. Between 1901 and 1903, many players and coaches on the Orioles roster jumped to the Giants. In January 1903, a "peace conference" was held between the two leagues to settle disputes and try to coexist. At the conference, Johnson requested that an AL team be put in New York, to play alongside the NL's Giants. It was put to a vote, and 15 of the 16 major league owners agreed on it. The Orioles' new owners, Frank J. Farrell and William S. Devery moved the team to New York in 1903.

The team's new ballpark, Hilltop Park (formally known as "American League Park"), was constructed in one of Upper Manhattan's highest points—between 165th and 168th Streets. The team was named the New York Highlanders. Fans believed the name was chosen because of the team's elevated location in Upper Manhattan, or as a nod to team president Joseph Gordon's Scottish-Irish heritage (the Gordon Highlanders were a well known Scottish military unit). Initially, the team was commonly referred to as the New York Americans. The team was also referred to as the "Invaders" in the Evening Journal. ''New York Press'' Sports Editor Jim Price coined the unofficial nickname Yankees (or "Yanks") for the club as early as 1904, because it was easier to fit in headlines. The Highlanders finished second in the AL in 1904, 1906, and 1910. In 1904, they lost the deciding game to the Boston Americans, who later became the Boston Red Sox. That year, Highlander pitcher Jack Chesbro set the single-season wins record at 41. At this time there was no formal World Series agreement wherein the AL and NL winners would play each other. 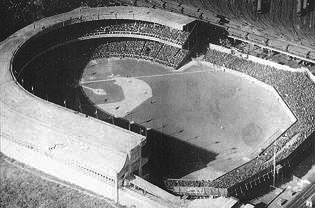 The original Polo Grounds burned down in 1911 and the Highlanders shared Hilltop Park with the Giants during a two-month renovation period. Later, from 1913 to 1922, the Highlanders shared the Polo Grounds with the Giants. While playing at the Polo Grounds, the name "Highlanders" fell into disuse among the press. In 1913 the team became officially known as the New York Yankees. By the middle of the decade, Yankees owners Farrell and Devery had become estranged and in need of money. At the start of 1915, they sold the team to Colonel Jacob Ruppert, a brewer, and Captain Tillinghast L'Hommedieu Huston, a contractor-engineer.

In the years around 1920, the Yankees, the Red Sox, and the Chicago White Sox had a détente. The trades between the three ball clubs antagonized Ban Johnson and garnered the teams the nickname "The Insurrectos". This détente paid off well for the Yankees as they increased their payroll. Most new players who later contributed to the team's success came from the Red Sox, whose owner, Harry Frazee, was trading them for large sums of money to finance his theatrical productions. Pitcher-turned-outfielder Babe Ruth was the most talented of all the acquisitions from Boston, and the outcome of that trade would haunt the Red Sox for the next 86 years, a span in which the team did not win a single World Series championship. This phenomenon eventually became known as the Curse of the Bambino as the failure of the Red Sox and the success of the Yankees seemed almost supernatural, and seemed to stem from that one trade. However, it was not until 1990 when Dan Shaughnessy of ''The Boston Globe'' wrote a book with the same title that the curse was publicized. Ruth's multitude of home runs proved so popular that the Yankees began drawing more people than their National League counterpart, the Giants.