In July 1831, Joseph Naper arrived at the west bank of the DuPage River with his family and friends to found what would be known as Naper's Settlement. Among those original settlers were Naper's wife Almeda Landon, his brother John with wife Betsy Goff, his sister Amy with husband John Murray (Naperville founder), John Murray, and his mother Sarah. Their arrival followed a nearly two-month voyage across three Great Lakes in the Naper brothers' schooner, the ''Telegraph''. Also on the journey were several families who remained in the settlement that would become Chicago, including that of Dexter Graves who is memorialized in Graceland Cemetery by the well-known Lorado Taft statue "Eternal Silence (sculpture), Eternal Silence" (also known as "the Dexter Graves Monument"). By 1832, over one hundred settlers had arrived at Naper's Settlement. Following the news of the Indian Creek massacre during the Black Hawk War, these settlers were temporarily displaced to Fort Dearborn for protection from an anticipated attack by the Sauk people, Sauk tribe. Fort Payne (Illinois), Fort Payne was built at Naper's Settlement, the settlers returned and the attack never materialized. The Pre-Emption House was constructed in 1834, as the Settlement became a stage-coach stop on the road from Chicago to Galena, Illinois, Galena. Reconstructions of Fort Payne and the Pre-Emption House stand as part of Naper Settlement List of open-air and living history museums in the United States, outdoor museum village, which was established by the Naperville Heritage Society and the Naperville Park District in 1969 to preserve some of the community's oldest buildings. In 1855, Sybil Dunbar came to Naperville as its first recorded black female resident; she died in 1868 and was buried in Naperville Cemetery on Washington Street. A commemorative marker honoring her was placed in the cemetery in 2015. After DuPage County was split from Cook County, Illinois, Cook County in 1839, Naper's Settlement became the DuPage county seat, a distinction it held until 1868. Naper's Settlement was incorporated as the Village of Naperville in 1857, at which time it had a population of 2,000. Reincorporation as a city occurred in 1890. In 1887, Peter Edward Kroehler established the Kroehler Manufacturing Company's factory in Naperville along the Chicago, Burlington & Quincy tracks. Kroehler Manufacturing became the world's largest furniture manufacturer, and a major employer in Naperville. The company closed the Naperville factory in 1978. In 1987, the site was redeveloped into upscale commercial and apartment properties, as Fifth Avenue Station. On April 26, 1946, Naperville was the site of one of the worst Naperville train disaster, train disasters in Chicago history. Two Chicago, Burlington and Quincy Railroad trains, the ''Advance Flyer'' and the ''Exposition Flyer'', collided 'head to tail' on a single track just west of the Loomis Street grade crossing. The accident killed 45 and injured approximately 127 passengers and/or crew members. This event is commemorated in a metal inlay map of Naperville on the southeast corner of the Nichols Library's sidewalk area. In 2012, author Chuck Spinner published ''The Tragedy at the Loomis Street Crossing'' which details the tragedy and gives the stories of the 45 persons who perished. On April 26, 2014, a memorial entitled Tragedy to Triumph was dedicated at the train station. The sculpture by Paul Kuhn is dedicated not only to the crash victims but also to the rescuers at the site. A predominantly rural community for most of its existence, Naperville experienced a population explosion beginning in the 1960s and continuing into the 1980s and 1990s, following the construction of the East-West Tollway (now known as the Ronald Reagan Memorial Tollway) and Interstate 355 (originally known as the North–South Tollway, now the Veterans Memorial Tollway). It has nearly quadrupled in size as the Chicago metropolitan area's urban sprawl brought corporations, employment, jobs, and wealth to the area. The March 2006 issue of ''Chicago (magazine), Chicago'' magazine cites a mid-1970s decision to make and keep all parking in downtown Naperville free to keep downtown Naperville "alive" in the face of competition with Westfield Fox Valley, Fox Valley Mall in Aurora and the subsequent sprawl of strip shopping malls. Parking meters were taken down, parking in garages built in the 1980s and 1990s is free, and parking is still available on major thoroughfares during non-peak hours. Naperville marked the 175th anniversary of its 1831 founding in 2006. The anniversary events included celebrations, concerts and a balloon parade.

Naperville is within the Illinois Technology and Research Corridor. Employers contributing to the population explosion of the 1980s and 1990s included: Bell Labs and Western Electric (once Alcatel-Lucent, now Nokia), Amoco (now BP and Ineos), Nalco Holding Company, Nalco, Calamos, Nicor, and Edward Hospital. and ConAgra Foods, ConAgra's Grocery division branch office employs approximately 400 workers. Kraft Foods (now Mondelez International) opened their Naperville site in 1968, and employs over 200 individuals at the plant, which supplies all Triscuit products for North America. Naperville is also home to the headquarters of Dukane Precast, and their double-wall precast concrete manufacturing plant. Naperville was one of the ten fastest growing communities in the United States during the 1990s. The Naperville area is home to many popular retailers, restaurants and shopping centers, such as downtown Naperville, Freedom Commons, Springbrook Prairie Pavilion, and the Illinois Route 59, Route 59 and Ogden Avenue corridors. Naperville has over eleven automobile dealerships, and in October 2006, the city opened the country's first public-private automobile test track, situated on a course, at a cost of $1.5 million.

According to the city's 2019 Comprehensive Annual Financial Report, the city's top ten employers are:

The Naperville Public Library has been ranked number one in the United States each year from 1999 through 2010, for cities with populations between 100,000 and 249,999 by ''Hennen's American Public Library Ratings''. There are three public library locations within the city limits: *The Nichols Library is in downtown Naperville, at 200 W. Jefferson Street. It opened at this location in March 1986. It is a structure and is pictured at right. The previous library building still stands on Washington Street, just south of the YMCA building, at Washington and Van Buren. *The Naper Boulevard Library was dedicated in December 1992 and underwent internal renovations in 2015. It is at 2035 S. Naper Boulevard and is the smallest of the three buildings at *The 95th Street Library is near the intersection of 95th Street (Chicago), 95th Street and Illinois Route 59, Route 59, at 3015 Cedar Glade Drive (just west of Neuqua Valley High School). Opened in September 2003, it is the newest and largest of the three facilities at and features a modern, curving architectural style. This building was renovated in 2018 with the entire lower level reorganized to define social areas, maximize space, and go green. The three libraries are used heavily by the public, including around one and a half million visitors and a circulation of about five million items yearly.

Naperville is home of the Naperville Independent Film Festival, an annual film festival which features the work of independent filmmakers.

The Naperville Municipal Band is a nonprofit organization founded in 1859. They perform a summer concert series in Naperville's Central Park, as well as several other concerts around the city, and are made up of over 90 volunteer musicians.

In 1999, Naperville was designated a White House Millennium Community, due to the construction of the Moser Tower and Millennium Carillon. The tower was started with a community lead fundraising effort in 1998. The 158-foot-tall Moser tower is just on north of Aurora Avenue and at the base of Rotary Hill within the Riverwalk Park complex. The tower's design won an award for "Best Custom Solution" from the Precast/Prestressed Concrete Institute (PCI). The Millennium Carillon is designated as one of the four largest carillons in the world, with 72 bronze bells weighing from 10 pounds to the 6-ton "Captain Joseph Naper Bell". It is one of only four in the world that span six octaves. It was dedicated in an Independence Day (United States), Independence Day event on June 29, 2000, with a reception attended by over 15,000, and a performance by the Naperville Municipal Band and the Naperville Men's Glee Club and Festival Chorus. The Carillon is both manually and also computer-playable, with most performances done by hand, but with half the bells played by a computer-controlled system at set times during the day. At present, the Carillon is operational and tours are available after concerts. In 2004, the City of Naperville took over control of the community venture that had run out of money. The Tower would later open in July 2007 with funding for completion of the site coming from the City of Naperville.

Naperville is known for the Naperville Riverwalk, built in 1981 to commemorate Naperville's 150th anniversary. The Riverwalk has many points of interest along its 1.75 mile path.

The DuPage Children's Museum was founded in 1987; and moved from Wheaton to its Naperville location in 2001. The Museum was rebuilt and redesigned in 2015. 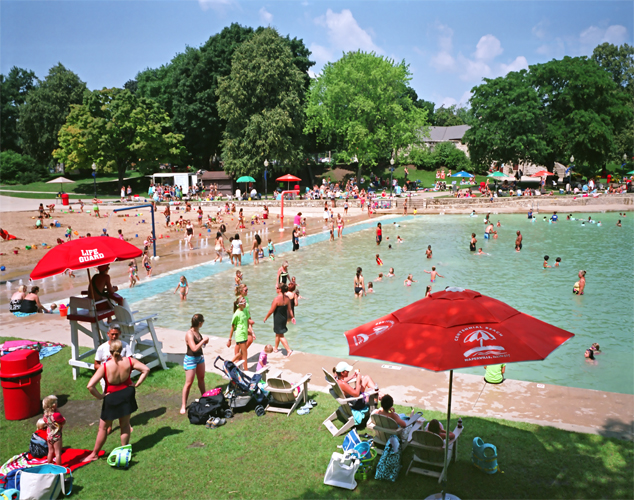 * ''Daily Herald (Arlington Heights), Daily Herald'' is a daily newspaper served suburban Chicago. It was started in 1872 and prospered by Hosea Paddock and his posterity since 1889. * ''Naperville Sun'' is a local newspaper served Naperville, Illinois and published three days a week, Wednesday, Friday and Sunday. It was founded in 1935 and now is owned by Chicago Tribune Media Group. *Shaw Media includes daily and weekly print and online publications located in Illinois and Iowa.

The Ronald Reagan Memorial Tollway (the tolled portion of Interstate 88 (west), Interstate 88) passes through northern Naperville. US Route 34 (Ogden Avenue) enters Naperville in the west at Illinois Route 59. A diverging diamond interchange, the first in Northeast Illinois, was completed in 2015 at the junction of Route 59 and Interstate 88. 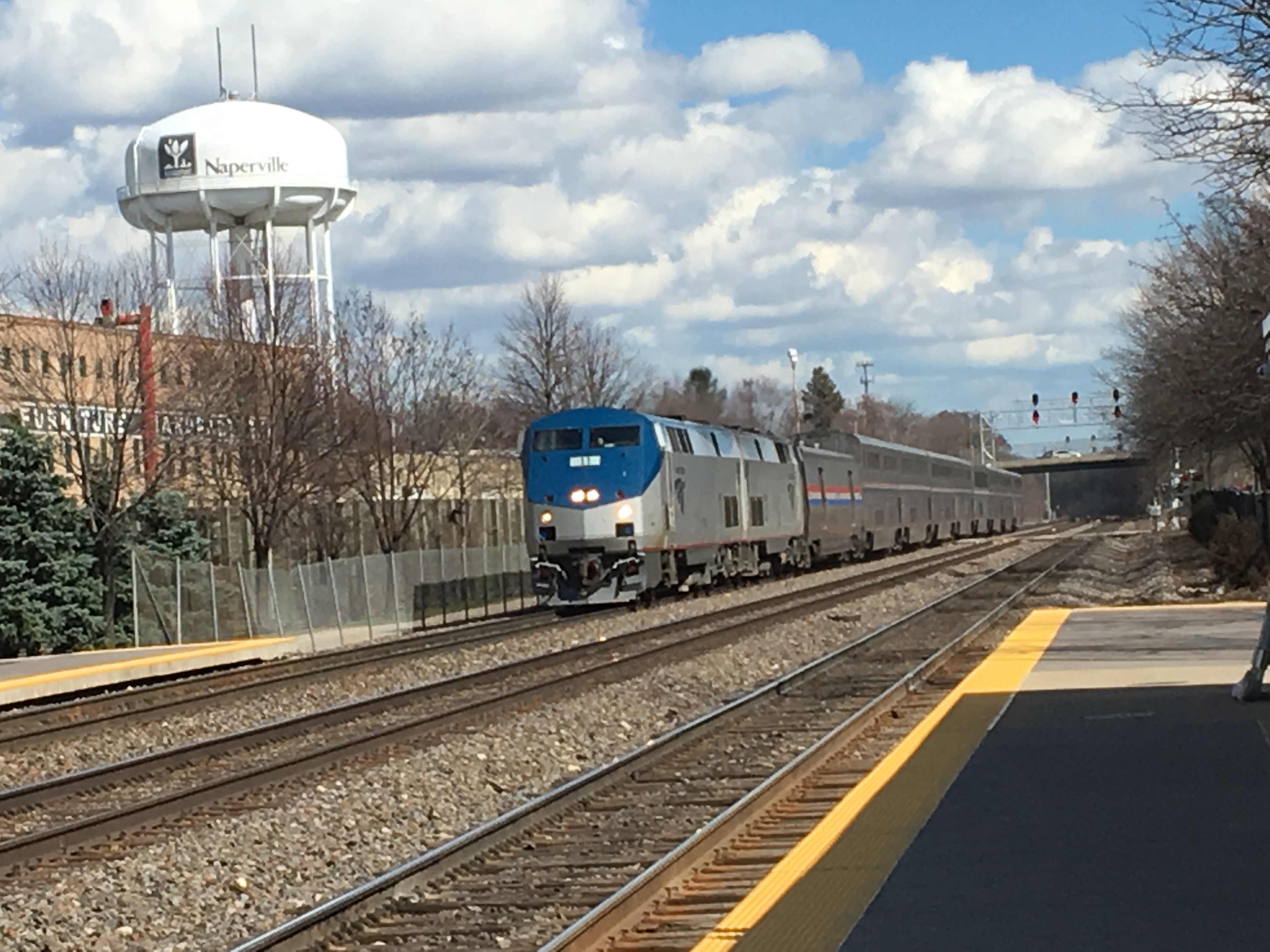 The first rail link to Chicago dates to 1864, established by the Chicago, Burlington and Quincy Railroad. Naperville currently has three tracks belonging to the BNSF Railway that run through the north end of town, with passenger rail service provided by Metra and Amtrak. Amtrak's four daily trains through Naperville are the ''Illinois Zephyr'' and ''Carl Sandburg (train), Carl Sandburg'' (both destined for Quincy, Illinois), the ''California Zephyr'' (destined for Emeryville, California), and the ''Southwest Chief'' (destined for Los Angeles). A third Metra station was planned on the Suburban Transit Access Route, Suburban Transit Access Route ("STAR") at Wolf's Crossing. The project is no longer active since 2012. 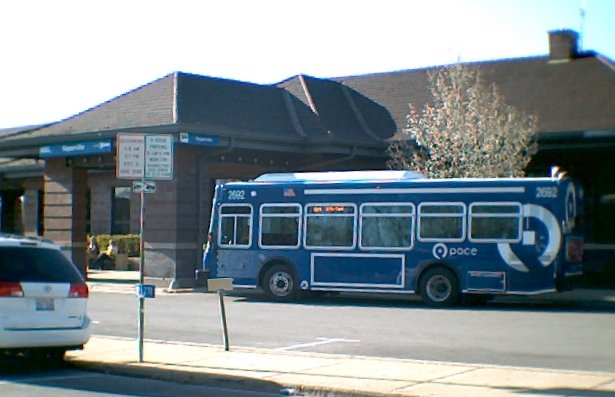 Pace (transit), Pace provides rush hour bus service to the Metra stations, and previously, through 2008, had provided for local midday service. Both services have always been operated under contract; First Student, a national transportation management firm, is the current contract operator. In addition, Pace directly operates bus route 530 from Naperville to Aurora, Illinois, Aurora (which serves Aurora's Fox Valley Mall) and bus route 714 from Naperville to Wheaton, Illinois, Wheaton (which serves the College of DuPage), both through its Fox Valley division. Pace also directly operates route 888, a rush hour express route named the "Tri-State Flyer", from Homewood, Illinois, Homewood and South Holland, Illinois, South Holland to corporate employment sites in the western suburbs, including those in the northern part of Naperville; this route is operated by Pace through its South division. Intercity bus service in Naperville consists of a route from Chicago and Naperville to Davenport, Iowa, and points further west, operated by both Burlington Trailways and Greyhound Lines. The Burlington Trailways buses stop at the Naperville (Amtrak station), Naperville Metra and Amtrak station, downtown on Fourth Avenue; the Greyhound Lines buses stop at the Route 59 (Metra station), Route 59 Metra station.

O'Hare International Airport and Midway International Airport are approx. away from Naperville, respectively. The DuPage Airport, a general aviation airport serving private and charter jets, is 14 miles from downtown Naperville. There is also one private airport, the Naper Aero Club field, designation LL-10, on the western edge of town. The field is notable for being the home of the Lima Lima Flight Team.