Following World War II, the Soviet Union prioritized developing a long-range strategic bomber capable of delivering atomic weapons. Their first aircraft was the Tupolev Tu-4, a reverse-engineered version of the American B-29 Superfortress. The Tu-4 was only ever a stop-gap solution, as unlike the American strategic bomber force that could operate from bases in allied countries close to the USSR, it lacked the range to reach the continental United States, and experiences in the Korean War demonstrated piston engine bombers were extremely vulnerable to jet fighter interception. With the advancement of Western jet bombers like the B-47 Stratojet and Vickers Valiant, Vladimir Mikhailovich Myasishchev was directed to construct a ''strategichesky dalny bombardirovshchik'' (SDB, "strategic long-range bomber") in spring of 1951. The first M-4 (Bison-A) prototype flew on 20 January 1953, and was handed over to state acceptance trials in March 1954, with production beginning later that year. It entered service in 1955, with 34 being built including two prototypes. The M-4 was made mostly of aircraft aluminum alloys with some steel and magnesium components. It had wings swept at 35-degrees and powered initially by four Mikulin AM-3A engines with a maximum thrust of 85.8 kN (8,750 kgp; 19,290 lbf), but later upgraded to RD-3M-500 turbojets with a maximum thrust of 93.2 kN (9,500 kgp; 20,940 lbf). There were 18 bladder fuel tanks in the fuselage and wings, providing a total fuel capacity of 123,600 liters (32,610 US gallons); this gave the aircraft a range of , although this fell short of the range initially specified. It had a payload of 24 tonnes (26.4 tons) in various configurations. Defensive armament consisted of six AM-23 23 mm cannons with a rate of fire of 1,250 rpm each in a manned twin tail turret with 400 rounds per gun and two twin remote controlled turrets in the top and bottom fuselage with 300 rounds per gun each. The aircraft had a crew of eight: a navigator/bombardier in the nose; pilot and copilot in the cockpit; radar operator/navigator, flight engineer/gunner, radio operator/gunner, and dorsal turret gunner in a compartment behind the cockpit; and a tail gunner.

While the M-4 had less range than the Tupolev Tu-95, it had greater speed and payload, sufficient advantages to continue improving on the design. In 1954, approval was granted for a redesign of the M-4, which flew on 27 March 1956 and began state trials in early 1958. The 3M "Bison-B" was powered by four Dobrynin RD-7 turbojets, which had the same thrust as the RD-3M but were 25% more fuel efficient; a nose inflight refueling probe was also added to further increase range. The center fuselage was considerably redesigned to reduce weight and improve aerodynamics, and the wings were updated with a wider span and area. 74 Bison-Bs would be built.

From the outset when the M-4's range shortfall became apparent, Myasishchev began investigating inflight refueling. In 1955, the second production aircraft was modified to a hose-&-drogue tanker configuration and the first production aircraft was fitted with an IFR probe above the nose, with two more converted for trials the following year. From the late 1950s, the M-4 fleet was converted to the tanker configuration through the fit of a hose-drum unit (HDU) and fuel tanks in the bomb bay and removal of all defensive armament. Similar conversions were performed to the 3M fleet in the 1970s and 1980s, the 3MS-1 "Bison-B" becoming the "3MS-2" tanker and the 3MN-1 becoming the "3MN-2" tanker. 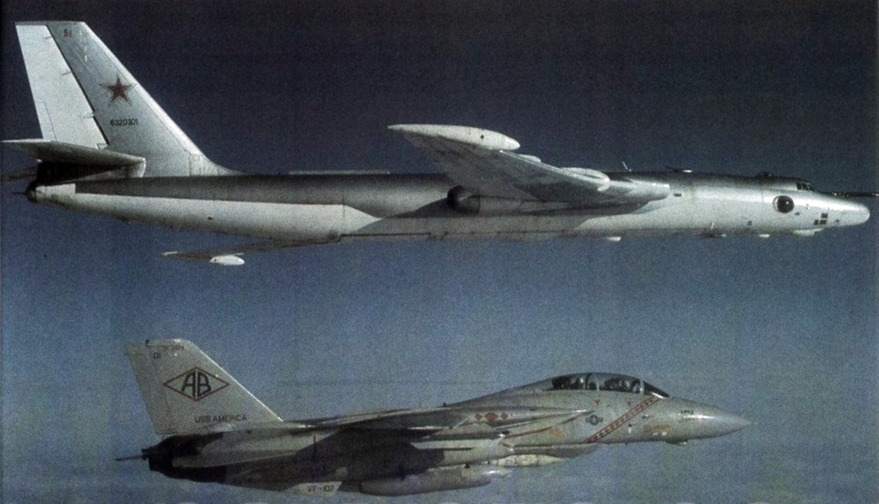 The M-4 was first displayed to the public in Red Square, on May Day, 1954. The aircraft was a surprise to the United States, which had not known that the Soviets had built a jet bomber. However, it soon became clear that the bomber had an insufficient range to attack the United States and still return to the Soviet Union. Only a few of the original production M-4s were actually put into service. To remedy this problem, the Myasishchev design bureau introduced the 3M, known to the West as the 'Bison-B', which was considerably more powerful than the previous version. This new model first flew in 1955. Among other things, two of the five original gun barbettes were removed to lighten the aircraft. In July 1955 American observers saw 28 Bisons in two groups during a Soviet air show. The United States government believed that the bomber was in mass production, and the Central Intelligence Agency estimated that 800 would be available by 1960. The display was a hoax; the first group of ten repeated the flyby with eight more. The classified estimates led, however, to American politicians warning of a "bomber gap". This time, it was not the Soviet Air Force (VVS) that wanted the 3M, but rather Naval Aviation (AV-MF). Though it could still not bomb Washington, D.C., the 3M had a sufficient range to fulfill the need for a long-range maritime patrol aircraft. In 1959, the 3M broke numerous world records for payload to height, including to and to . However, it was thought by the West (and would continue to be thought until 1961) that the 3M was the original M-4, meaning that the capability of the M-4 was vastly overestimated by Western intelligence agencies. In the early 1960s, the 'Bison-C', with a specialized search radar, was introduced. By this time, many of the original M-4s had been converted to M-4-2 fuel tankers for aerial refueling. Later, 3Ms were converted to 3MS-2 and 3MN-2 tankers as well. Neither the M-4 nor the 3M ever saw combat, and none were ever converted for low-altitude attack, as many American B-52s were, nor were any ever exported to the Soviet Union's allies. Production of the Bison aircraft stopped in 1963, by which time 93 of them had been built. The last aircraft, an M-4-2 fuel tanker, was withdrawn from service in 1994. The three VM-T heavy lift aircraft were converted from 3MN-2 tankers, with very large loads carried piggy-back above the fuselage. The single vertical fin/rudder was replaced with two large rectangular fin/rudders at the tips of the horizontal stabilizers to improve control due to the turbulence caused by the cargo pod. With the withdrawal of the Myasishchev bombers and tankers the vast majority of the retired airframes were broken up under the terms of the relevant arms limitation treaty. 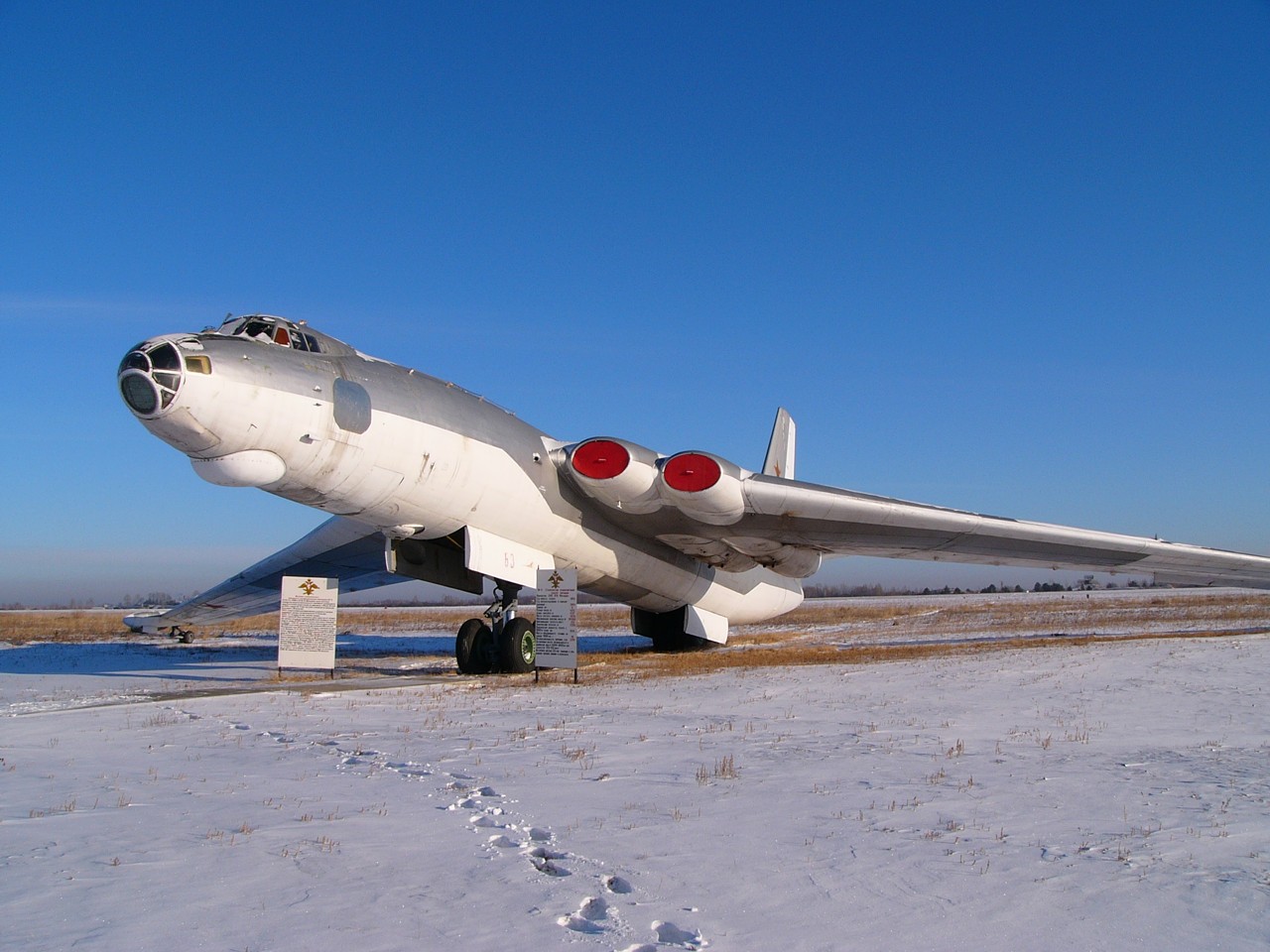 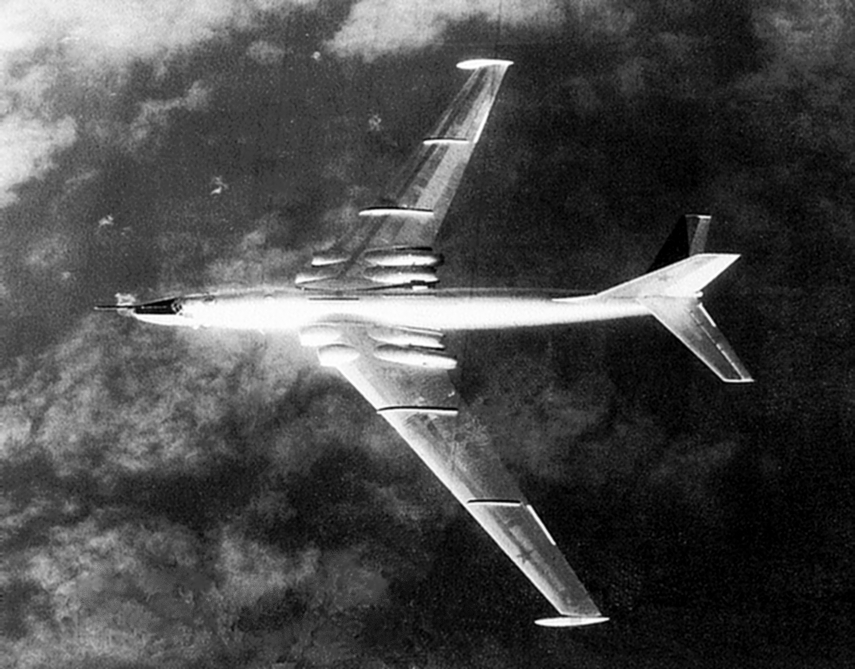 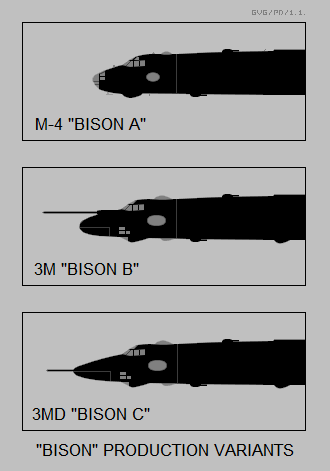