Madsen was born on September 25, 1957, in Chicago, Illinois. His mother, Elaine Loretta Madsen (née Melson; born 1932), was a filmmaker and author. His father, Calvin Christian Madsen (1927–2015), was a World War II Navy veteran and a firefighter with the Chicago Fire Department. His parents divorced in the 1960s, and his mother left the financial world to pursue a career in the arts, encouraged by film critic Roger Ebert. His siblings are Cheryl Madsen, an entrepreneur, and Academy Award nominee Virginia Madsen. Madsen's paternal grandparents were Danish, while his mother is of English, German, Irish, Native American and Scottish ancestry.

Madsen began working at the Steppenwolf Theatre Company in Chicago, where he served as an apprentice under John Malkovich and appeared in a production of ''Of Mice and Men''. His first notable film role was a small part, playing opposite John Spencer, in the beginning of ''WarGames''. In Quentin Tarantino's directorial debut film ''Reservoir Dogs'', Madsen played Mr. Blonde, a villainous mobster. He did not get the role of Mr. Pink (which went to Steve Buscemi), which he wanted because it had more scenes with Harvey Keitel. For ''Pulp Fiction'', Madsen had to decline the role of Vincent Vega, which went to John Travolta, because he was filming ''Wyatt Earp''. Madsen starred in Mike Newell's gangster film ''Donnie Brasco'' (1997). He once said of these films: "Some of them I'm only in for 10 minutes, but they bought my name, and they bought my face to put on the DVD box with a gun. What people don't always understand is that I established a certain lifestyle for my family back in the days of ''Species'' and ''Mulholland Falls'' and ''The Getaway''. I wasn't about to move my six kids into a trailer park. So when people offered me work, it wasn't always the best, but I had to buy groceries and I had to put gas in the car." 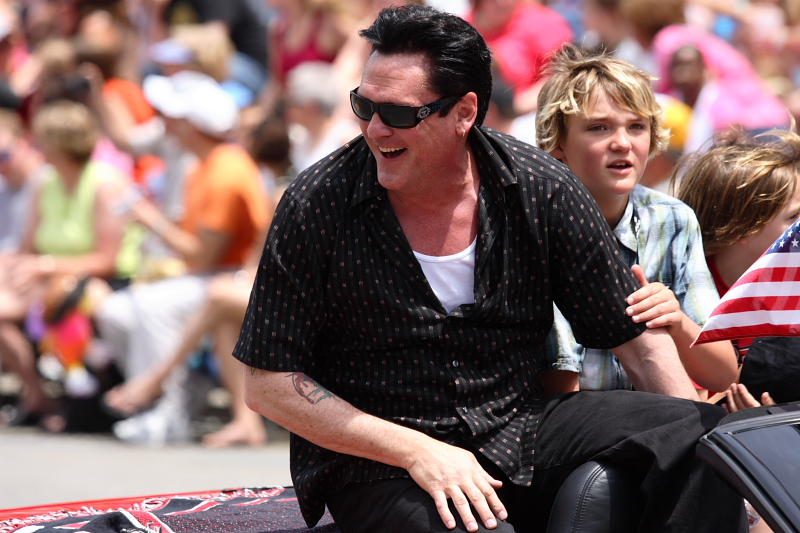 In ''Kill Bill'', Madsen played assassin Budd, the brother of Bill (David Carradine) The film was released in two parts, ''Vol. 1'' and ''Vol. 2''. In 2004, Tarantino discussed an idea for the film to unite Madsen and Travolta, as The Vega Brothers. In 2007, Tarantino said the film (which he intended to call ''Double V Vega'') was "kind of unlikely now", because of the age of the actors and the onscreen deaths of both characters. Madsen appeared in Uwe Boll's ''BloodRayne'', a film he described as "an abomination... It's a horrifying and preposterous movie". He won Best Actor awards at the Boston Film Festival and New York International Independent Film and Video Festival for his performance in ''Strength and Honour''. He played himself in the mockumentary ''Being Michael Madsen''. Madsen co-starred in ''Coma'', a Web series on Crackle. Madsen played Jim Ricker, the old friend of Jack Bauer (Kiefer Sutherland), in the eighth season of ''24''. Madsen starred in the comedy film ''Let the Game Begin''. On January 5, 2012, he entered the Celebrity Big Brother house, where he finished in 4th place in the final. In February 2014, he played Las Vegas casino mogul Ted Binion in Josh Evans' film ''Death in the Desert''. The screenplay was written by John Steppling, based on the book ''Death in the Desert'' by crime writer Cathy Scott. In August 2014, he starred in the ''Kill Bill''-themed music video for the song "Black Widow" by Iggy Azalea featuring Rita Ora. Madsen starred in the ensemble western film ''The Hateful Eight'' (2015). He was among a number of people rumored to have leaked the film's script before it was released, causing Tarantino to almost not make the film and eventually rewrite it; it was later established that Madsen was not responsible for leaking the script. In 2016, he played a dramatized role of former Texas Ranger Phil Ryan in ''Real Detective'' on the ''Investigation Discovery'' network. In 2019, ''The Dirty Kind'' was released, a crime-drama from writer/director Vilan Trub featuring Michael Madsen as Executive Producer. The movie is loosely inspired by Anthony Weiner.

Madsen has been writing since the early 1990s. He began writing on match books, napkins and hotel stationery in between his time working on film sets and traveling around the world. In 2005, 13 Hands Publications compiled all of his poetry and released ''The Complete Poetic Works of Michael Madsen, Vol I: 1995–2005''. The original books released were ''Beer, Blood and Ashes'' (1995), ''Eat the Worm'' (1995), ''Burning in Paradise'' (1998), and the now out-of-print ''A Blessing of the Hounds'' (2002), ''46 Down; A Book of Dreams and Other Ramblings'' (2004) and ''When Pets Kill'' (2005). His friend, Dennis Hopper, described his poetry as a throwback to the Beat Generation: "I like him better than Kerouac: raunchier, more poignant, he's got street language, images I can relate to, blows my mind with his drifts of gut-wrenching riffs; this actor is a poet and he is cool, of course, he is Michael Madsen." Madsen has noted influences for his style of poetry, as being Jack Kerouac and Charles Bukowski. In 2008, Madsen was invited and appeared in Norway for the Norwegian translation and release of ''Burning In Paradise''. In November 2010, he was the guest of honor for his poetry at the Crossing Border Festival at The Hague. Another book of poetry, ''American Badass'', was released on September 25, 2009. Madsen dedicated the book to the memory of his friend and ''Kill Bill'' co-star David Carradine. His latest book, ''Expecting Rain'', was released in October 2013 with an introduction by Jerry Hopkins.

Madsen is also an accomplished photographer. In 2006, he released his first book of photography entitled ''Signs of Life'', which contained new selections of his poetry and was published by 13 Hands Publications. It was also dedicated to the memory of his friend Chris Penn.

Madsen's first wife was Georganne LaPiere. They met in 1983 and married in 1984, and divorced two years later. He was married to Jeannine Bisignano from 1991 to 1995. They have two children, including their son Christian Madsen, also an actor. In 1996, he married DeAnna Madsen. They have three children. He also has one daughter named Jessica. Madsen has a line of hot sauces called ''American Badass''. Madsen has been twice arrested for drunk driving, in 2012 and 2019.

In 2002, Madsen was presented an award for his work with the Shriners Hospital for Children. In September 2009, Madsen announced his participation in the 26th annual Love Ride to help raise money for local charities. The charity included the celebrities, including Malcolm Forbes, Peter Fonda, Larry Hagman, Billy Idol and Bruce Springsteen among others. The event was scheduled for October 25, 2009, but was ultimately cancelled due to poor ticket sales and a decline in sponsorship. In 2016, Madsen hosted the event ''An Intimate Evening with Michael Madsen'' to benefit Children's Pediatric Cancer.