Margaret Court (née Smith; born 16 July 1942), also known as Margaret Smith Court, is an Australian retired tennis player and former world No. 1. She won 24 Grand Slam women's singles titles in her career, 19 Grand Slam doubles titles, and 21 Grand Slam mixed doubles titles. She won more Grand Slam titles than any other player in history, and is considered one of the greatest tennis players of all time. She is currently a Christian minister in Perth, Western Australia. In 1970, Court became the first woman during the Open Era (the second woman in history after Maureen Connolly) to win the singles Grand Slam (all four major tournaments in the same calendar year). She won 24 Grand Slam singles titles in total (11 in the Open Era), which is the all-time record. She also won 19 women's doubles and 21 mixed doubles titles, giving her a record 64 Grand Slam titles overall. Her all surfaces (hard, clay, grass and carpet) singles career-winning percentage of 91.74 is the best of all time according to the Sporteology website. Her Open era singles career winning percentage of 91.37% (593–56) is unequalled, as is her Open era winning percentage of 91.7% (11–1) in Grand Slam finals. Her win-loss performance in all Grand Slam singles tournaments was 90.12% (210–23). She was 95.31% (61–3) at the Australian Open, 90.38% (47–5) at the French Open, 85.10% (51–9) at Wimbledon and 89.47% (51–6) at the US Open. She also shares the Open era record for most Grand Slam singles titles as a mother with Kim Clijsters. In 1973, Court set the record for most titles won in a single Grand Slam event, with 11 Australian Open wins. This record was surpassed by Rafael Nadal in 2019 when he won his 12th French Open title, but remains a women's record. Court is one of only three players in history (all women) to have won the "Grand Slam Boxed Set", consisting of every Grand Slam title (the singles, doubles and mixed doubles). Court, however, is the only one in tennis history to complete a Multiple Grand Slam set, twice, in all three disciplines: singles, women's doubles and mixed doubles. Uniquely, she won all 12 as an amateur and then after a period of retirement, returned as a professional to win all 12 again. Court is also one of only six tennis players ever to win a Multiple Grand Slam set in two disciplines, matching Roy Emerson, Martina Navratilova, Frank Sedgman, Doris Hart and Serena Williams. The International Tennis Hall of Fame states: "For sheer strength of performance and accomplishment there has never been a tennis player to match (her)." In 2010, the ''Herald Sun'' called her the greatest female tennis player of all time, a view supported by Evonne Goolagong Cawley. Having grown up as a Roman Catholic, Court became associated with Pentecostalism in the 1970s and became a Christian minister in that tradition in 1991. She later founded Margaret Court Ministries. She has become a subject of controversy due to her views on homosexuality and same-sex marriage.

Margaret Smith was born in Albury, New South Wales, the youngest of four children of Lawrence Smith and Catherine Beaufort. She has two older brothers, Kevin and Vincent, and an older sister, June Shanahan. She is a natural left-hander who was persuaded to change to a right-hand grip. She began playing tennis when she was eight years old and was 18 in 1960 when she won the first of seven consecutive singles titles at the Australian Championships. Court became the first female player from Australia to win a Grand Slam tournament abroad when she won the French and US Championships in 1962. The year after that, she became the first Australian woman to win Wimbledon. Across singles, doubles and mixed doubles, she won a remarkable 64 Grand Slams. After Wimbledon in 1966, Court temporarily retired from tennis. She married Barry Court in 1967, whose father, Charles Court, and brother, Richard Court, served as premiers of Western Australia. She returned to tennis in 1968, and in 1970 won all four Grand Slam singles titles. The next year, she lost the Wimbledon singles final to Evonne Goolagong Cawley while pregnant with her first child, Daniel, who was born in March 1972. Court made a comeback the same year and played in the US Open and then played throughout 1973. Her second child, Marika, was born in 1974. She started playing again in November of that year. After missing most of 1976 after having her third child, she returned to the tour in early 1977 but retired permanently that year when she learned that she was expecting her fourth child. Her last Grand Slam tournament appearance in the singles was in the 1975 US Open. Her last Grand Slam tournament appearance overall was in the 1976 Australian Open in the women's doubles. Court is one of only three players to have achieved a career "boxed set" of Grand Slam titles, winning every possible Grand Slam title – singles, women's doubles and mixed doubles – at all four Grand Slam events. The others are Doris Hart and Martina Navratilova. Court, however, is the only person to have won all 12 Grand Slam events at least twice. She also is unique in having completed a boxed set before the start of the open era in 1968 and a separate boxed set after the start of the open era. Court lost a heavily publicised and US–televised challenge match to a former world No. 1 male tennis player, the 55-year-old Bobby Riggs, on 13 May 1973, in Ramona, California. Court was the top-ranked women's player at the time, and it has been reported that she did not take the match seriously because it was a mere exhibition. Using a mixture of lobs and drop shots, Riggs beat her 6–2, 6–1. Four months later, Billie Jean King beat Riggs in the Battle of the Sexes match in the Houston Astrodome. In January 2003, Show Court One at the sports and entertainment complex Melbourne Park was renamed Margaret Court Arena. Since 2012, the arena has attracted calls for its name to be changed, on the basis of Court's statements against gay and lesbian rights. 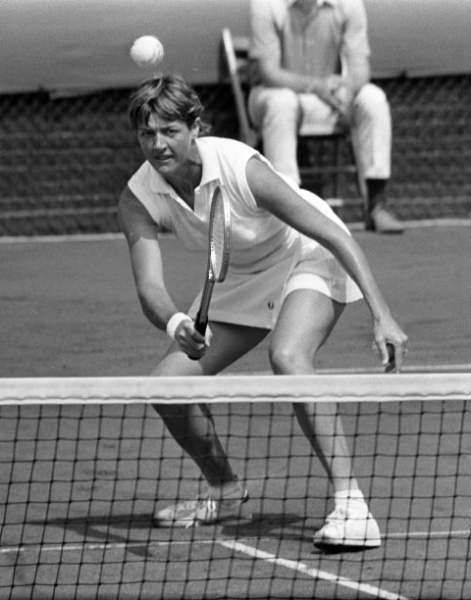 During the 1960s, Court was considered to have a very long reach which added a new dimension to women's volleying. With a height and reach advantage and being extremely strong, she was very formidable at the net and had an effective overhead shot. She was considered unusually mobile for her size and played an all attack, serve and volley style which, when added to her big serve, dominated conservative defensive players. Part of what helped her win was her commitment to fitness training. Court was dubbed "The Aussie Amazon" because she did weights, circuit training and running along sandy hillsides. This training helped keep her relatively injury-free through most of her career. Court won a record 64 Grand Slam tournament titles, including a record 24 singles titles, 19 women's doubles titles and a record 21 mixed doubles titles. The total includes two shared titles at the Australian Championships/Open in 1965 and 1969. The mixed doubles finals of those years were not played because of bad weather and the titles are shared by both of the finalist pairs. Court won 62 of the 85 Grand Slam tournament finals (72.9%) she played, including 24–5 (82.8%) in singles finals, 19–14 (57.6%) in women's doubles finals and 19–4 (82.6%) in mixed doubles finals. Court reached the final in 29, the semifinals in 36 and the quarterfinals in 43 of the 47 Grand Slams singles tournaments she played. She won 11 of the 16 Grand Slam singles tournaments she entered, beginning with the 1969 Australian Open and ending with the 1973 US Open. She also won 11 of the 17 Grand Slam singles tournaments she entered, beginning with the 1962 Australian Championships and ending with the 1966 Australian Championships. She was 146–2 (98.6%) against unseeded players in Grand Slam singles tournaments. Court is the only player to have won the Grand Slam in both singles and mixed doubles. She won the singles Grand Slam in 1970, the mixed doubles Grand Slam in 1963 with fellow Australian Ken Fletcher and the mixed doubles Grand Slam in 1965 with three different partners (Fletcher, John Newcombe and Fred Stolle). Court won more than half of all the Grand Slam contests held in 1963 (8 of 12), 1964 (7 of 12), 1965 (9 of 12), 1969 (8 of 12), 1970 (7 of 11) and 1973 (6 of 11). According to the end-of-year rankings compiled by London's ''Daily Telegraph'' from 1914 to 1972, Court was ranked world No. 1 six times: 1962, 1963, 1964, 1965, 1969 and 1970. She was also ranked No. 1 for 1973 when the official rankings were produced by the Women's Tennis Association.

*On 1 January 1967, she was made Member of the Order of the British Empire (MBE), for her services to sport and international relations. *In 1963 and 1970, she became winner of the ABC Sportsman of the Year Award. *In 1970 she also won a Western Australian honour, the Walter Lindrum Award. *In 1979, Court was inducted into the International Tennis Hall of Fame. *In 1985, Court was inducted into the Sport Australia Hall of Fame and then elevated to Legend status in 1998. *In 1993 in Melbourne, she was inducted into the Australian Tennis Hall of Fame. *In 2000, Court was awarded the Australian Sports Medal for her impressive tennis career. *In 2001, she was awarded the Centenary Medal for her service to Australian tennis. *In 2001, she was inducted onto the Victorian Honour Roll of Women. *In 2003 Court became the recipient of the 2003 Australia Post Australian Legends Award. Australia Post honoured her, together with fellow Australian tennis player Rod Laver by featuring her on postage stamp. *In 2006, she was awarded the International Tennis Federation's (ITF) accolade, the Philippe Chatrier Award. *In 2007, she was made an Officer of the Order of Australia (AO), for her services to tennis, as a mentor and to the community. *In 2021, she was advanced to a Companion of the Order of Australia (AC), for "eminent service to tennis as an internationally acclaimed player and record-holding grand slam champion, and as a mentor of young sportspersons".

Court was raised as a Roman Catholic but became involved with Pentecostalism in the mid-1970s. In 1983, she gained a theological qualification from the Rhema Bible Training Centre, and in 1991 was ordained as an independent Pentecostal minister and so speaks publicly about her faith. She subsequently founded a ministry known as Margaret Court Ministries. In 1995, she founded a Pentecostal church known as the Victory Life Centre in Perth. She still serves as its senior pastor. Her television show, ''A Life of Victory'', airs Sundays on the Australian Christian Channel and locally in Perth on community television station West TV. She has generally embraced teachings associated with the Word of Faith movement.