MSNBC is an American news-based pay television cable channel based in New York City. It is owned by the NBCUniversal News Group division of NBCUniversal (a subsidiary of Comcast). It provides NBC News coverage as well as its own reporting and political commentary on current events. MSNBC and its website were founded in 1996 under a partnership between Microsoft and General Electric's NBC unit, hence the network's naming. Although they had the same name, msnbc.com and MSNBC maintained separate corporate structures and news operations. msnbc.com was headquartered on the Microsoft campus in Redmond, Washington, while MSNBC operated out of NBC's headquarters in New York City. Microsoft divested itself of its stakes in the MSNBC channel in 2005 and in msnbc.com in July 2012. The general news site was rebranded as NBCNews.com, and a new msnbc.com was created as the online home of the cable channel, broadcasting from 30 Rockefeller Plaza in Midtown Manhattan. In the late summer of 2015, MSNBC revamped its programming; the moves were in sharp contrast to previous programming decisions at the network. MSNBC sought to sharpen its news image by entering into a dual editorial relationship with its organizational parent NBC News. ''MSNBC Live'', the network's flagship daytime news platform, was expanded to cover over eight hours of the day. Phil Griffin is the president and director of day-to-day operations at MSNBC. On June 29, 2009, MSNBC launched a 1080i high-definition feed. As of September 2018, approximately 87 million households in the United States (90.7 percent of pay television subscribers) were receiving MSNBC. In 2019, MSNBC ranked second among basic cable networks averaging 1.8 million viewers, behind rival Fox News, averaging 2.5 million viewers.

MSNBC was established under a strategic partnership between NBC and Microsoft. NBC executive Tom Rogers was instrumental in developing this partnership. James Kinsella, a Microsoft executive, served as president of the online component, MSNBC.com, and represented the tech company in the joint venture. Microsoft invested $221 million for a 50 percent share of the cable channel. MSNBC and Microsoft shared the cost of a $200 million newsroom in Secaucus, New Jersey, for msnbc.com. The network took over the channel space of NBC's 2-year-old America's Talking (AT) network, although in most cases cable carriage had to be negotiated with providers who had never carried AT.

MSNBC was launched on July 15, 1996. The first show was anchored by Jodi Applegate and included news, interviews, and commentary. During the day, rolling news coverage continued with ''The Contributors'', a show that featured Ann Coulter and Laura Ingraham, as well as interactive programming coordinated by Applegate, John Gibson, and John Seigenthaler. Stories were generally longer and more detailed than the stories CNN was running. NBC also highlighted their broadcast connections by airing stories directly from NBC's network affiliates, along with breaking news coverage from the same sources. MSNBC gradually increased its emphasis on politics. After completing its seven-year survey of cable channels, the Project for Excellence in Journalism said in 2007 that, "MSNBC is moving to make politics a brand, with a large dose of opinion and personality." In January 2001, Mike Barnicle's MSNBC show started, but it was canceled in June 2001 because of high production costs. In June, Microsoft chief executive officer Steve Ballmer said that he would not have started MSNBC had he foreseen the difficulty of attracting viewers. After the September 11, 2001 attacks, NBC used MSNBC as an outlet for the up-to-the-minute coverage being provided by NBC News as a supplement to the longer stories on broadcast NBC. With little financial news to cover, CNBC and CNBC Europe ran MSNBC for many hours each day following the attacks. The year also boosted the profile of Ashleigh Banfield, who was present during the collapse of Building 7 while covering the World Trade Center on September 11. Her ''Region In Conflict'' program capitalized on her newfound celebrity and showcased exclusive interviews from Afghanistan. In the aftermath of September 11, MSNBC began calling itself "America’s NewsChannel" and hired opinionated hosts like Alan Keyes, Phil Donahue, Pat Buchanan, and Tucker Carlson; This branding makeover, however, was followed by declining ratings. On December 23, 2005, NBC Universal announced its acquisition of an additional 32 percent share of MSNBC from Microsoft, which solidified its control over television operations and allowed NBC to further consolidate MSNBC's backroom operations with NBC News and its other cable properties. (The news website msnbc.com remained a separate joint venture between Microsoft and NBC for another seven years.) NBC later exercised its option to purchase Microsoft's remaining 18 percent interest in MSNBC. In late 2005, MSNBC began attracting liberal and progressive viewers as Keith Olbermann began critiquing and satirizing conservative media commentators during his ''Countdown With Keith Olbermann'' program. He especially focused his attention on the Fox News Channel and Bill O'Reilly, its principal primetime commentator. On June 7, 2006, Rick Kaplan resigned as president of MSNBC after holding the post for two years. Five days later, Dan Abrams, a nine-year veteran of MSNBC and NBC News, was named general manager of MSNBC with immediate effect. NBC News senior vice president Phil Griffin would oversee MSNBC while continuing to oversee NBC News’ ''Today'' program, with Abrams reporting to Griffin. On June 29, 2006, Abrams announced the revamp of MSNBC's early-primetime and primetime schedule. On July 10, ''Tucker'' (formerly ''The Situation with Tucker Carlson'') started airing at 4 p.m. and 6 p.m. ET (taking over Abrams' old timeslot), while Rita Cosby's ''Live & Direct'' was canceled. Cosby was made the primary anchor for ''MSNBC Investigates'' at 10 and 11 p.m. ET, a new program that took over Cosby and Carlson's timeslots. According to the press release, ''MSNBC Investigates'' promised to "complement MSNBC's existing programming by building on he channel'slibrary of award-winning documentaries." The move to taped programming during 10 and 11 p.m. probably resulted from MSNBC's successful Friday "experiment" of replacing all primetime programming with taped specials. On September 24, 2007, Abrams announced that he was leaving his general manager position so he could focus on his 9:00 p.m. ET talk show, ''Live With Dan Abrams''. Oversight of MSNBC was shifted to Phil Griffin, a senior vice president at NBC. 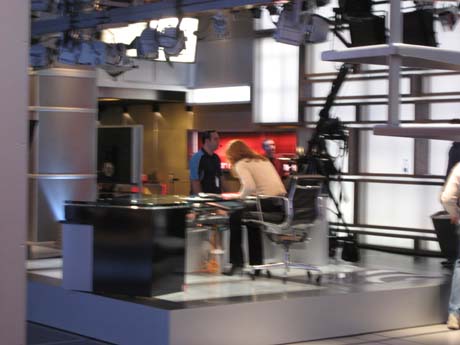 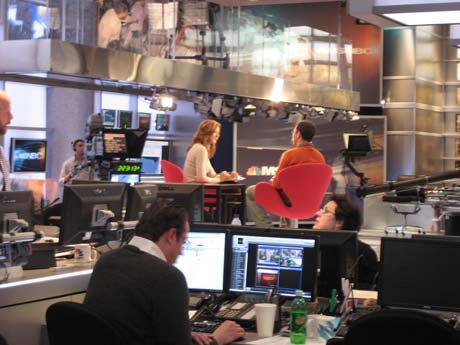 MSNBC and NBC News began broadcasting from their new studios at NBC's 30 Rockefeller Center complex in New York City on October 22, 2007. The extensive renovations of the associated studios allowed NBC to merge its entire news operation into one building. All MSNBC broadcasts and ''NBC Nightly News'' originate from the new studios. More than 12.5 hours of live television across the NBC News family originate from the New York studios daily. MSNBC also announced new studios near the Universal Studios lot. MSNBC's master control did not make the move to 30 Rock. It remained in the old Secaucus headquarters until it completed its move to the NBC Universal Network Origination Center located inside the CNBC Global Headquarters building in Englewood Cliffs, New Jersey, on December 21, 2007. Shortly thereafter, Major League Baseball firmed up a long-term lease of the former MSNBC building to become the home studios of MLB Network, which launched from the facility on January 1, 2009.

From mid-2007 to mid-2008, MSNBC enjoyed a large increase in its Nielsen ratings. Primetime viewings increased by 61 percent.