Liberia (), officially the Republic of Liberia, is a country on the West African coast. It is bordered by Sierra Leone to its northwest, Guinea to its north, Ivory Coast to its east, and the Atlantic Ocean to its south-southwest. It has a population of around 5 million and covers an area of . English is the official language, but over 20 indigenous languages are spoken, representing the numerous ethnic groups who make up more than 95% of the population. The country's capital and largest city is Monrovia. Liberia began as a settlement of the American Colonization Society (ACS), who believed black people would face better chances for freedom and prosperity in Africa than in the United States. The country declared its independence on July 26, 1847. The U.S. did not recognize Liberia's independence until February 5, 1862, during the American Civil War. Between January 7, 1822, and the outbreak of the American Civil War in 1861, more than 15,000 freed and free-born people of color who faced social and legal oppression in the United States, as well as 3,198 Afro-Caribbeans, relocated to the settlement. The settlers carried their culture and tradition with them. The Liberian constitution and flag were modeled after those of the U.S. On January 3, 1848, Joseph Jenkins Roberts, a wealthy, free-born African American from Virginia who settled in Liberia, was elected Liberia's first president after the people proclaimed independence. Liberia was the first African republic to proclaim its independence, and is Africa's first and oldest modern republic. It retained its independence during the Scramble for Africa. During World War II, Liberia supported the United States war effort against Germany and in turn, the U.S. invested in considerable infrastructure in Liberia to help its war effort, which also aided the country in modernizing and improving its major air transportation facilities. In addition, President William Tubman encouraged economic changes. Internationally, Liberia was a founding member of the League of Nations, United Nations, and the Organisation of African Unity. The Americo-Liberian settlers did not relate well to the indigenous peoples they encountered, especially those in communities of the more isolated "bush". The colonial settlements were raided by the Kru and Grebo from their inland chiefdoms. Americo-Liberians developed as a small elite that held on to political power, and indigenous tribesmen were excluded from birthright citizenship in their own land until 1904. Americo-Liberians promoted religious organizations to set up missions and schools to educate the indigenous peoples. In 1980, political tensions from the rule of William R. Tolbert resulted in a military coup during which Tolbert was killed, marking the end of Americo-Liberian rule in the country and beginning of years-long political instability. Five years of military rule by the People's Redemption Council and five years of civilian rule by the National Democratic Party of Liberia were followed by the First and Second Liberian Civil Wars. These resulted in the deaths of 250,000 people (about 8% of the population) and the displacement of many more, and shrank Liberia's economy by 90%. A peace agreement in 2003 led to democratic elections in 2005, in which Ellen Johnson Sirleaf was elected president, making history as the first female president in the continent. National infrastructure and basic social services were severely affected by the conflicts as well as by the 2013–2016 outbreak of Ebola virus, with 83% of the population living below the international poverty line as of 2015.

Undated Acheulean artifacts are abundant across West Africa, attesting to the presence of ancient humans. The emerging chronometric record of the Middle Stone Age (MSA) indicates that core and flake technologies have been present in West Africa since at least the Middle Pleistocene (~780-126 thousand years ago or ka), and that they persisted until the Terminal Pleistocene/Holocene boundary (~12ka)—the youngest examples of such technology anywhere in Africa. The presence of MSA populations in forests remains an open question, however technological differences may correlate with various ecological zones. Later Stone Age (LSA) populations evidence significant technological diversification, including both microlithic and macrolithic traditions. The presence of Oldowan Earlier Stone Age (ESA) artefacts in West Africa has been confirmed by Michael Omolewa. Acheulean ESA artefacts are well documented across West Africa. None are currently dated. There are few dated Middle Stone Age (MSA) sites; they range from the Middle Pleistocene in northern, open Sahelian zones to the Late Pleistocene in both northern and southern zones of West Africa. The record shows that aceramic and ceramic Later Stone Age (LSA) assemblages in West Africa are found to overlap chronologically, and that changing densities of microlithic industries from the coast to the north are geographically structured. These features may represent social networks or some form of cultural diffusion allied to changing ecological conditions. Microlithic industries with ceramics became common by the Mid-Holocene, coupled with an apparent intensification of wild food exploitation. Between ~4–3.5ka, these societies gradually transformed into food producers, possibly through contact with northern pastoralists and agriculturalists, as the environment became more arid. However, hunter-gatherers have survived in the more forested parts of West Africa until much later, attesting to the strength of ecological boundaries in this region. 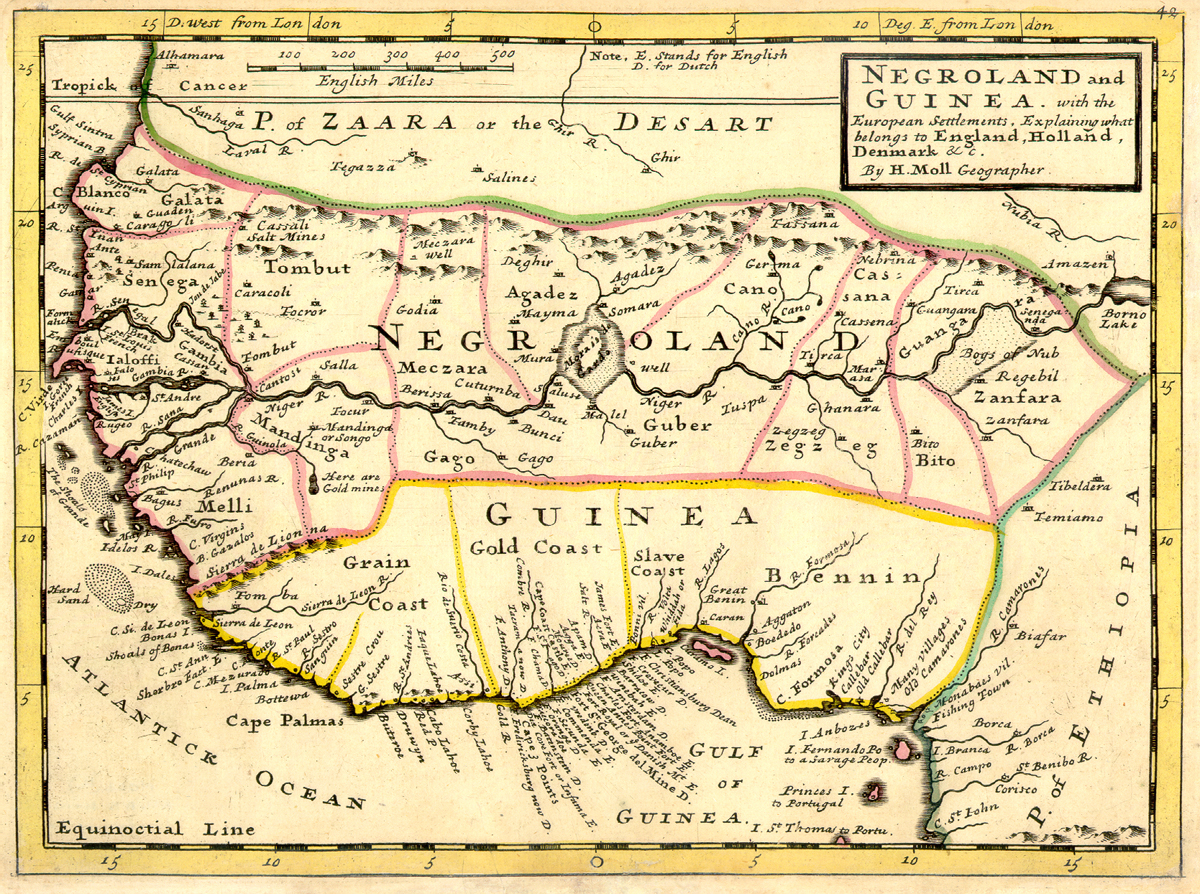 The Pepper Coast, also known as the Grain Coast, has been inhabited by indigenous peoples of Africa at least as far back as the 12th century. Mande-speaking people expanded westward from the Sudan, forcing many smaller ethnic groups southward toward the Atlantic Ocean. The Dei, Bassa, Kru, Gola, and Kissi were some of the earliest documented peoples in the area. This influx of these groups was compounded by the decline of the Western Sudanic Mali Empire in 1375 and the Songhai Empire in 1591. As inland regions underwent desertification, inhabitants moved to the wetter coast. These new inhabitants brought skills such as cotton spinning, cloth weaving, iron smelting, rice and sorghum cultivation, and social and political institutions from the Mali and Songhai empires. Shortly after the Mane conquered the region, the Vai people of the former Mali Empire immigrated into the Grand Cape Mount County region. The ethnic Kru opposed the influx of Vai, forming an alliance with the Mane to stop further influx of Vai. People along the coast built canoes and traded with other West Africans from Cap-Vert to the Gold Coast. Arab traders entered the region from the north, and a long-established slave trade took captives to north and east Africa.

Between 1461 and the late 17th century, Portuguese, Dutch, and British traders had contacts and trading posts in the region. The Portuguese named the area ''Costa da Pimenta'' ("Pepper Coast") but it later came to be known as the Grain Coast, due to the abundance of melegueta pepper grains. European traders would barter commodities and goods with local people. In the United States there was a movement to settle free people of color, both free-born and formerly enslaved, in Africa. This was because they faced racial discrimination in the form of political disenfranchisement and the denial of civil, religious, and social rights. Formed in 1816, the American Colonization Society (ACS) was made up mostly of Quakers and slaveholders. Quakers believed blacks would face better chances for freedom in Africa than in the U.S. While slaveholders opposed freedom for enslaved people, they viewed "repatriation" of free people of color as a way to avoid slave rebellions.