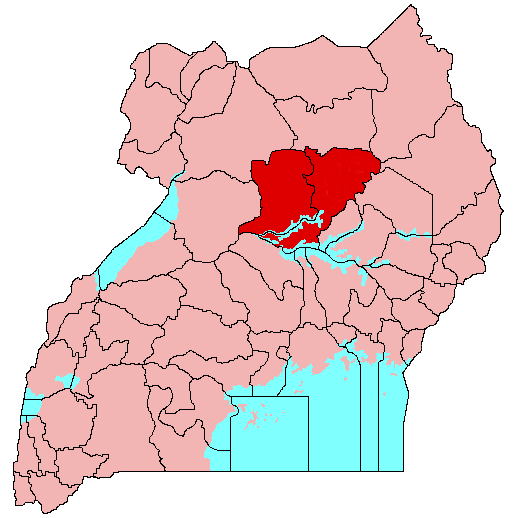 The Lango people live in north central Uganda. The region covers the area formerly Lango District until 1974, when it was split into the districts of Apac and Lira, and subsequently into several additional districts. The current Lango Region now includes the districts of Amolatar, Alebtong, Apac, Dokolo, Kole, Lira, Oyam, and Otuke. Their population is 2,131,495. The Lango speak “LebLango”, a dialect mutually intelligible with the Luo language. According to Driberg (1923), a Luo of Kisumu in Kenya would at once understand, and in two months would readily speak LebLango.

The Lango Oral tradition states that they were part of the "Lango race" during the migration period. This group later split into several distinct groups before entering Uganda (see Tarantino, Odwe, Crazollara, Uzoigwe). The name “Lango” is found in Teso, Kumam, Karamojong, Jie, and Labwor vocabularies, reflecting that these groups once belong to the Lango race. Hutchinson (1902) states "One of the chief nations of the late kingdom of Unyoro are the Lango (Lango, Longo) people, who although often grouped with the Nilotic Negroes, are really of the Galla stock and speech. They form, in fact, an important link in the chain of Hamitic peoples who extend from Galla-land through Unyoro and Uganda southwards to Lake Tanganyika. Their territory which occupies both banks of the Somerset or Victoria Nile between Foweira and Magungo, extends eastwards beyond Unyoro proper to the valley of the Chol, one of the chief upper branches of the Sobat. They still preserved their mother tongue amid Bantu and Negroid populations, and are distinguished by their independent spirit, living in small groups, and recognising no tribal chief, except those chosen to defend the common interest in the time of war" (p. 360). Hutchinson (1902) adds "The Lango are specially noted for the care bestowed on their elaborate and highly fantastic head-dress. The prevailing fashion may be described as a kind of a helmet.... Lango women, who amongst the finest and most symmetrical of the Equatorial lake regions, wear little clothing or embellishments beyond west-bands, necklaces, armlets, and anklets" (p. 360).

Rwot Ogwangguji was born in 1875 in Abedpiny village in Lira district.(Okino, Patrick and Odongo, Bonney). He was the son of a Rwot (chief) – Rwot Olet Apar, the leader of the Oki clan. His first administrative chief title was the Jago (sub-chief) of Lira. In 1918, he was elected county chief (Rwot) by Erute county, Lango. He continued as Rwot of Erute county until February 28, 1951 and was later promoted to the title of Rwot Adwong (Senior Chief). Rwot Ogwangguji is known as a chief who bridged "old Lango" into "new Lango" through his extensive work history during a period of many changes in the 20th century in Uganda. He was awarded the M.B.E. in the New Year's Honors in 1956 and subsequently retired in December 1957. (Wright, M.J., Uganda Journal, Vol. 22, Issue 2, 1958).

Driberg described Lango people as "brave and venturesome warriors who have won fear and respect of their neighbors...not being idle witnesses to watching of the misfortunes of their neighbors...treating facts of life with no sense of false modesty...". The Lango army was united under one military leader chosen from available men, and all had to agree to be led by him. These military leaders would lead the Lango army against other groups. Their authority ended when the war was over, and they all returned to their clans and resumed their daily occupation and were not entitled to any special benefits. Famous military leaders were Ongora Okubal who brought Lango to their present land, Opyene Nyakonyolo who succeeded Ongora Okubal and was followed by Arim Oroba, and Agoro Abwango. Agoro Abwango led his men to fight the Banyoro and was killed in Bunyoro, (Kihangire, p. 22). The Lango oral literature has it that as the soldiers who went to help Kabalega retreated towards the Nile, they helped Kabalega and Mwanga, the deposed King of Bunyoro and Buganda respectively cross the Nile River. They were moved along the northern corridor of Lake Kwania. At the time, a warrior called Obol Ario who had conquered much of the northern part of the lake was there at the time. It's believed he helped smuggle the two deposed kings towards Dokolo where they settled at Kangai subcounty. Obol Ario of Apac Okwero Ngec Ayita Clan eventually settled at Amac where he later died and was buried.

Land in pre-colonial era was common land, and any untilled area belonged to the first person or family who tilled it, and it was passed on to the eldest son. According to Kigangire, "land which had not been cultivated in the past could be tilled by any family, and, when once it had been tilled, the community regarded it as the property of the family whose ancestor first cultivated it." (Kihangire, p. 22). The traditional land tenure is still widely used in rural areas.