, staff = , coor = , affiliations = Association of MBAs
Association of Commonwealth Universities, ACU
University Alliance
European University Association, EUA
Universities UK Kingston University London (abbreviated KUL) is a Public Research University, public research university located within the Royal Borough of Kingston upon Thames, in South London, South West London, England. Its roots go back to the Kingston Technical Institute, founded in 1899. It received university status in 1992, before which the institution was known as Kingston Polytechnic. Kingston has 16,820 students and a turnover of £192 million. It has four campuses situated in Kingston upon Thames, Kingston and Roehampton. The university specialises in the arts, design, fashion, science, engineering, and business and is organised into four faculties: Kingston School of Art, Faculty of Business and Social Sciences (which combines Kingston Business School and the School of Law, Social and Behavioural Sciences), Faculty of Health, Social Care and Education and Faculty of Science, Engineering and Computing. The Kingston Business School is Council for National Academic Awards, CNAA Master of Business Administration, MBA degree approved. In 2017, the university won ''The Guardian'' University Award for teaching excellence. Kingston is a member of the European University Association, the Association of Commonwealth Universities and University Alliance group.

Kingston was founded as Kingston Technical Institute in 1899, it offered courses in chemistry, electrical wiring, construction and nursing. In 1917 Gipsy Hill College for teacher training opened, a predecessor of Kingston University. In 1930 the Kingston School of Art separated from the Technical Institute, later to become Kingston College of Art in 1945. In 1946 Gipsy Hill College moved to Kingston Hill. In 1951, the first Penryhn Road campus buildings opened. Kingston was recognised as a 'Regional College of Technology' by the Ministry of Education (United Kingdom), Ministry of Education in 1957. In 1970, the College of Technology merged with the College of Art to become Kingston Polytechnic, offering 34 major courses, of which 17 were at degree level. In 1975, Kingston merged with the Gipsy Hill College of Education, incorporating the College's faculty into Kingston's Division of Educational Studies. Kingston was granted university status under the Further and Higher Education Act 1992. In 1993, Kingston opened the Roehampton Vale campus building and in 1995, Kingston acquired Dorich House. 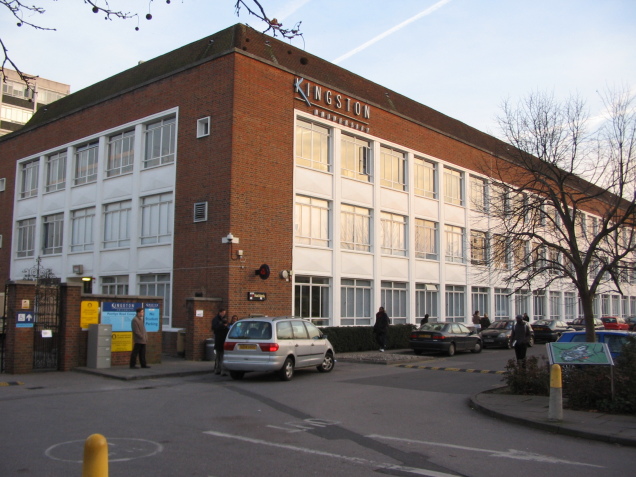 This is the main university campus located close to Kingston town centre. Students based here study: Arts and Social Sciences, Civil Engineering, Computing and Information Systems and Mathematics, Earth Sciences and Geography, Statistics, Biosciences, Pharmacy, Chemistry and Pharmaceutical Science, and Radiography. Development at this site has extended it to the Learning Resources Centre. In 2015, the Union of Kingston Students, moved into the main building. Penrhyn Road also houses the refurbished Fitness Centre.

Kingston University's Town House building was opened in January 2020 and is located on the Penrhyn Road campus. The flagship six-storey building was the first to be designed by Royal Institute of British Architects (RIBA) Gold Medal-winning firm Grafton Architects in the United Kingdom and is open to students, staff and the local community. The building work was carried out by Hertfordshire-based Willmott Dixon. It features a three-floor academic library, archive, dance studios and a studio theatre, while it also incorporates a covered internal courtyard, two cafes and external balconies and walkways culminating in a rooftop garden offering views across Kingston upon Thames (parish), Kingston upon Thames and the River Thames. Town House has been nominated for three awards, including in ''The Guardian'' University Awards, and a Royal Institute of British Architects (RIBA) London Regional Award. 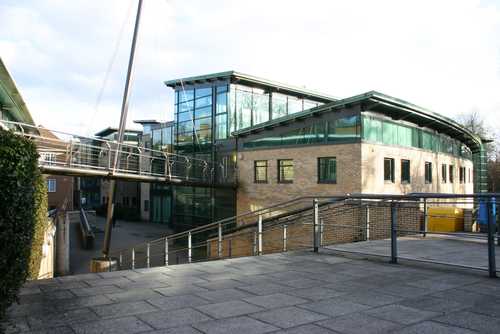 Kingston Hill mainly caters to Nursing (adult, child, mental health and learning disability), Education, Business, Music and Social Care. Before 1989, this campus was known as Gipsy Hill. The Business School moved to a new building on the Kingston Hill Campus in 2012.

Located on Grange road, Knights Park campus is home to some of the students from Kingston School of Art (KSA) - architecture an art and design students. The campus is built on the northern banks of the Hogsmill River and opened in 1939. A £29 million refurbishment of the Mill Street workshops, studios and the reception area was completed in March 2020 and includes a gallery, a social space and an art shop. The regeneration project was shortlisted for a Royal Institute of British Architects (RIBA) London Regional Award.

The Roehampton Vale campus was opened in 1993 by Sir William Barlow, the president of the Royal Academy of Engineering. The site is located on Friars Avenue, on the outskirts of Kingston. This campus is purpose-built and completely dedicated to the study of engineering (aerospace, automotive, motor vehicle and mechanical engineering). Facilities on site include a wind tunnel, engineering workshops, a flight simulator,a range of vehicles, a Learjet 25 plan, plus automotive and aeronautical learning resources.

Additional to the four main campuses is an administration building: Hind Court on London Road which is home to the office of the Vice-Chancellor. Furthermore, art and design studies students from Kingston School of Art are based at River House, on the High Street in Kingston town centre.

Teaching and research are organised in four faculties.

Kingston School of Art (KSA) was established as part of Kingston Technical Institute founded 1899. The School of Art separated from the Technical College in 1930 and left Kingston Hall Road to move to Knights Park in 1939. It became Kingston College of Art in 1945 and merged back with the Technical College to form Kingston Polytechnic in 1970. The Polytechnic later became Kingston University in 1992, under which the school was known as the Faculty of Art, Design and Architecture (FADA) until 2017 when it reverted to its historic name. Kingston School of Art delivers undergraduate and postgraduate programmes of study across three schools:

Faculty of Business and Social Sciences

Faculty of Science, Engineering and Computing

The Faculty of Science, Engineering and Computing (SEC) was formed in 2011. The faculty's teaching is split between undergraduate and postgraduate programmes. Facilities at the Roehampton Vale campus including a Learjet 25, flight simulator, wind tunnel and automotive workshops including a range of vehicles and testing facilities.

The Stanley Picker Gallery is the Faculty's exhibition space which is now used to present a variety of research-based projects, fellowships and exhibitions. In 2003, the Stanley Picker Gallery gave birth to Transitstation, which was created/curated by Stanley Picker Fellow Dagmar Glausnitzer-Smith, and former gallery curator Charles Ryder. In 2003, the Director of Foundation Studies in Art and Design, Paul Stafford, converted a run-down public convenience in Kingston town centre into the Toilet Gallery. Kingston University runs Dorich House Museum which houses a huge collection of sculptor Dora Gordine's work, and fine examples of Russian Imperial art and furniture. Dorich House is also used as meeting and conference venue.

The Union of Kingston Students (UKS), formerly Kingston University Students' Union (KUSU), and in the 1990s KUGOS (Kingston University Guild of Students') is a charitable organisation representing the student body and aiming to provide services and activities beneficial to the student experience. It is a student union in the meaning of the term given in the Education Act 1994, and whilst independent of the university is funded by a block grant from it.

The university has six halls of residence. Chancellors' and Walkden are based at the Kingston Hill campus. Middle Mill is adjacent to Knights Park campus, while Clayhill and Seething Wells are on opposite sides of Surbiton. Finally, there is Kingston Bridge House which is situated on the edge of Bushy Park at the Hampton Wick end of Kingston Bridge, London.

The university holds a number of links with institutions from around the world to share teaching and research and facilitate staff and student exchanges. Kingston has a number of international 'Study Abroad' or 'Exchange' partner institutions.

In 2008, the BBC obtained e-mails circulated within Kingston's School of Music, relating to the opinions of an external examiner moderating the BMus course. The messages showed that her final report caused considerable concern within the department. The examiner was persuaded to moderate her criticism following contact from a member of the University's staff. The e-mails also detailed a plan to replace her (at the end of her term) with a more experienced and broad-based external examiner, a process which Kingston stressed breaks no rules relating to the appointment of such examiners. In October 2008, Peter Williams, Chief Executive of the UK Quality Assurance Agency (QAA), presented the agency's findings to a Parliamentary Select Committee charged with investigating standards in British higher education. Following an investigation of the allegations by a former University staff member that undue pressure was applied to the School of Music's External Examiner, QAA upheld all charges of wrongdoing, as alleged.

In 2008, an audio recording obtained by student media included two psychology lecturers asking students to inflate their graded opinions given as part of the National Student Survey. One member of staff was recorded as encouraging students to boost specific satisfaction scores, because "if Kingston comes down the bottom [of the league tables], then the bottom line is that nobody is going to want to employ you because they are going to think your degree is shit". In response, Vice-Chancellor Peter Scott confirmed that the recording was genuine but added that he believed that the incident was an isolated one. In July 2008, the Higher Education Funding Council of England removed the University's Department of Psychology of the Faculty of Arts and Social Sciences from the League Tables for the year as its sanction for having fraudulently manipulated the National Student Survey results.