Khoisan , or according to the contemporary Khoekhoegowab orthography (), is a catch-all term for the "non-Bantu" indigenous peoples of Southern Africa, combining the (formerly "Khoikhoi") and the or (also, in af|Boesmans, or in English: ''Bushmen'', after nl|Boschjesmens; and in the Nǁng language). , specifically, were formerly known as "Hottentots", which was an onomatopoeic term (from Dutch ) referring to the click consonants prevalent in the Khoekhoe languages, as they are in all the languages grouped under . Dutchmen in the early Cape settlement would ply with liquor as an inducement for them to perform a ritual dance. The lyric accompanying the dance sounded, in Dutch ears, like . Sān are popularly thought of as foragers in the Kalahari Desert and regions of Botswana, Namibia, Angola, Zambia, Zimbabwe, Lesotho and South Africa. The word ''sān'' is from the Khoekhoe language and simply refers to foragers ("those who pick things up from the ground") who do not own livestock. As such it was used in reference to all hunter-gatherer populations of the Southern African region who -speaking communities came into contact with, and was largely a term referring to a lifestyle, distinct from a pastoralist or agriculturalist one, not any particular ethnicity. While there are attendant cosmologies and languages associated with this way of life, the term is an economic designator, rather than a cultural or ethnic one. is an ethnic designator. It refers to (several) populations which speak closely related languages and which are considered to be the historical pastoralist communities in the South African Cape region, through to Namibia, where populations of Nama and Damara people are prevalent ethnicities. These nations and Sān are grouped under the single term Khoesān as representing the indigenous substrate population of Southern Africa prior to the hypothesised Bantu expansion reaching the area, roughly between 1,500–2,000 years ago. Many Khoesān peoples are the direct descendants of a very early dispersal of anatomically modern humans to Southern Africa, before 150,000 years ago. Their languages show a vague typological similarity, largely confined to the prevalence of click consonants, and they are not verifiably derived from a common proto-language, but are today split into at least three separate and unrelated language families (Khoe-Kwadi, ǃUi-Taa and Kxʼa). It has been suggested that the Khoekhoeǁaen ( peoples) may represent Late Stone Age arrivals to Southern Africa, possibly displaced by Bantu immigration. The compound term ''Khoisan'' / ''Khoesān'' is a modern anthropological convention, in use since the early-to-mid 20th century. ''Khoisan'' is a coinage by Leonhard Schulze in the 1920s and popularised by Isaac Schapera. It enters wider usage from the 1960s, based on the proposal of a "Khoisan" language family by Joseph Greenberg. Khoesān peoples were historically also grouped as Cape Blacks ( af|Kaap Swartes) or Western Cape Blacks ( af|Wes-Kaap Swartes) to distinguish them from the Niger-Congo-speaking "Bantoid" or "Congoid" blacks of certain other parts of sub-Saharan Africa, who were the other indigenous African population of South Africa. Derived from this is the term ''Capoid'' used in 20th century anthropological literature. An equivalent term derived from the compound ''Khoisan'' is Khoisanid, in use primarily in genetic genealogy. The term ''Khoisan'' (also spelled ''KhoiSan'', ''Khoi-San'', ''Khoe-San'') has also been introduced in South African usage as a self-designation after the end of apartheid, in the late 1990s. Since the 2010s, there has been a "Khoisan activist" movement demanding recognition and land rights from the Bantu majority. 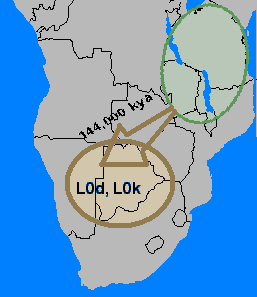 It is suggested that the ancestors of the modern Khoisan expanded to Southern Africa before 150,000 years ago, possibly as early as before 260,000 years ago, so that by the beginning of the MIS 5 "megadrought", 130,000 years ago, there were two ancestral population clusters in Africa, bearers of mt-DNA haplogroup L0 in southern Africa, ancestral to the Khoi-San, and bearers of haplogroup L1-6 in central/eastern Africa, ancestral to everyone else. Due to their early expansion and separation, the populations ancestral to the Khoisan have been estimated as having represented the "largest human population" during the majority of the anatomically modern human timeline, from their early separation before 150 kya until the recent peopling of Eurasia some 70 kya.