Jalan M.H. Thamrin or Jalan Thamrin (M.H. Thamrin Road or Thamrin Road) is a major thoroughfare in Jakarta, Indonesia. The road is located at the center of Jakarta, running from West Flood Canal at the south end to the roundabout near Arjuna Wijaya Statue Jakarta at the north end. Developed in the 1950s, the road was a landmark of post-colonial Indonesia and continues to have a prominent importance in Jakarta.

The road that would become Thamrin Road first appear around late 1910s as a small lane running from Koningsplein West (now Medan Merdeka Barat) to Kebon Sirih. This lane was known as Gang Timboel. Prominent landmark near this small lane was a 19th-century Armenian Church for the Armenian community of Batavia. The church has been demolished. The former location of the Armenian Church is the green within the complex of Bank Indonesia.

The development of the suburb Kebayoran in 1949 raised the need to link the suburb with the city center of Jakarta, and thus work on a new "highway" began in the same year. The northern half of this new highway received the name Jalan M.H. Thamrin by January 1951, after Indonesian National Hero Mohammad Husni Thamrin. To avoid the occupation of the newly opened lands by illegal squatters - a major problem at the time - the government sold these lands cheaply to those who committed to build on it within three to six months. Despite this, time extensions had to be granted because buyers could not arrange finance or procure building materials. Among the early projects situated in Thamrin Road were Sarinah Department Store, Bank Dagang Negara building (now Wisma Mandiri), Ministry of Religion building, Wisma Nusantara, Hotel Indonesia and the prominent Bundaran Hotel Indonesia. Thamrin Road was largely completed by 1953. 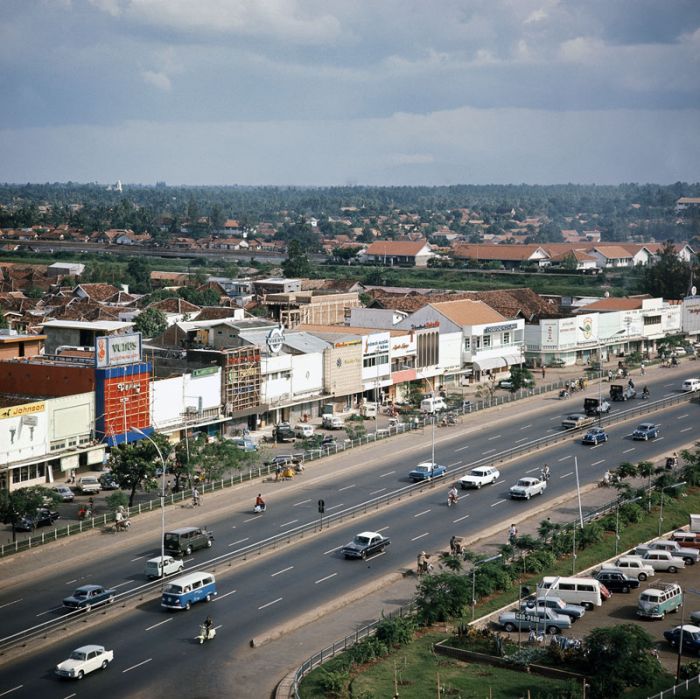 With the arrival of the 1962 Asian Games, President Sukarno imagined the VIP visitors for the Asian Games arriving at Kemayoran Airport, drove along Thamrin Road, be greeted by the Welcome Monument and stayed at Hotel Indonesia. For the Games itself, the same VIP visitors would be driven along Sudirman Road over the Semanggi cloverleaf bridge into the newly-opened Gelora Bung Karno sports complex where the competitions would take place. For the purpose of the game, both Thamrin and Sudirman Road were widened in the early 1960s. A regulation was also established which requires buildings along Thamrin Road to be minimum five-stories-high. This was difficult to achieve due to lack of funding and commercial building expertise at that time, and the fact that there were already several two-story government buildings along Thamrin Road. In the beginning of 1970s, Thamrin Road was already a major thoroughfare of Jakarta as envisaged by Sukarno. Buildings reached a minimum height of five stories e.g. ICA building (later the United Nations), Hotel Asoka, the Australian Embassy, and the state-owned developer Pembangunan Perumahan. Sudirman Road was still relatively devoid of development during the early 1970s compare with Thamrin Road, with the exception of the Gelora Bung Karno sports complex. Several parades were enacted along the major thoroughfare, including Jakarta's anniversary parade and Independence Day parade.

The Jakarta administration in December 2014 introduced a ban on motorcycles from using Jalan Thamrin and the adjoining Jalan Medan Merdeka Barat. The ban was lifted by governor Anies Baswedan in 2018.

Jalan M.H. Thamrin is currently served by and stations of Jakarta MRT. Sudirman station of KRL Commuterline and BNI City station of Soekarno–Hatta Airport Rail Link are located at the south end of the road as a part of Dukuh Atas TOD. There are four stops for the TransJakarta busway along Jalan M.H. Thamrin, mainly serving for Route 1. They are: * Tosari ICBC, close to Grand Indonesia Shopping Town, in front of UOB Plaza and The City Tower. * Sarinah, in front of Sarinah, Gedung Badan Pengawas Pemilihan Umum and Menara Eksekutif. * Bank Indonesia, in front of Bank Indonesia and Indosurya Center. * Bundaran Hotel Indonesia, in front of Bundaran HI with a passageway linking the stop with Bundaran HI Station. The road also served by many MetroTrans city bus and sightseeing tour bus.