Click Here for Items Related To - Islamic schools and branches


There are three traditional types of schools in Islam: schools of jurisprudence, Sufi orders and schools of theology. Other types of Islamic denominations and movements have arisen in the modern era. 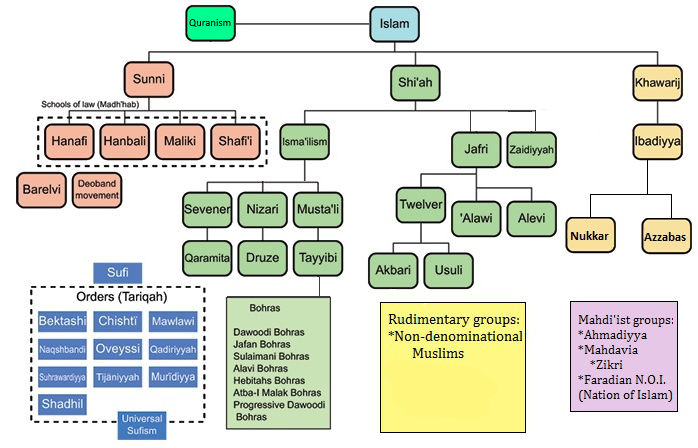 The original difference between Sunnis and Shias is over who the true first successor to Muhammad is. Shias believe Ali ibn Abi Talib is the true successor to Muhammad, while Sunnis consider Abu Bakr to hold that position. The Khawarij broke away from both the Shias and Sunnis during the First Fitna (the first Islamic Civil War) and subsequently opposed both the Shias and the Sunnis, often violently. In addition, there are several differences within Sunni Islam and Shia Islam. Sunni Islam is separated into four main schools of jurisprudence, namely, Hanafi, Maliki, Shafi'i, Hanbali. These schools are named after Abu Hanifa, Malik ibn Anas, al-Shafi'i, and Ahmad ibn Hanbal, respectively. Shia Islam, on the other hand, is separated into three major sects: Twelvers, Ismailis, and Zaydis. The vast majority of Shias are Twelvers (a 2012 estimate puts the figure as 94% of Shias being Twelvers) to the extent that the term "Shia" frequently refers to Twelvers by default. All mainstream Twelver Shia Muslims follow the same school of thought, the Jafari school of thought (named after Jafar as-Sadiq, the sixth Shia Imam). All four founders of the Sunni schools of thought gained knowledge, either directly or indirectly, through Jafar as-Sadiq. Zaydis, also known as Fivers, follow the Zayidi school of thought (named after Zayd ibn Ali). Isma'ilism is another offshoot of Shia Islam that later split into Nizari Ismaili and Musta’li Ismaili, and then Mustaali was divided into Hafizi and Taiyabi Ismailis. Tayyibi Ismailis, also known as "Bohras", are split between Da'udi Bohras, Sulaymani Bohras, and Alavi Bohras. Similarly, Kharijites were initially divided into five major branches: Sufris, Azariqa, Najdat, Adjarites and Ibadis. Of these, Ibadis are the only surviving branch of Kharijites. In addition to the aforementioned groups, new schools of thought and movements like Quranist Muslims, and African American Muslims later emerged independently.

Sunni Islam, also known as ''Ahl as-Sunnah wa'l-Jamā'h'' or simply ''Ahl as-Sunnah'', is the largest denomination of Islam. The word ''Sunni'' comes from the word ''sunnah'', which means the teachings and actions or examples of the ''Sahaba'' and the Islamic prophet, Muhammad. The Sunnis believe that Muhammad did not specifically appoint a successor to lead the Muslim ''ummah'' (community) before his death, however they approve of the private election of the first companion, Abu Bakr. Sunni Muslims regard the first four caliphs (Abu Bakr, Umar ibn al-Khattab, Uthman ibn Affan and Ali ibn Abi Talib) as "al-Khulafā'ur-Rāshidūn" or "The Rightly Guided Caliphs." Sunnis also believe that the position of caliph may be attained democratically, on gaining a majority of the votes, but after the Rashidun, the position turned into a hereditary dynastic rule because of the divisions started by the Umayyads and others. After the fall of the Ottoman Empire in 1923, there has never been another caliph as widely recognized in the Muslim world. In recent times, followers of the classical Sunni schools of jurisprudence and ''kalam'' (rationalistic theology) on one hand and Islamists and Salafis such as Wahhabis and Ahle Hadith, who follow a literalist reading of early Islamic sources, on the other, have laid competing claims to represent orthodox Sunni Islam. Anglophone Islamic currents of the former type are sometimes referred to as "traditional Islam". Islamic Modernism is an offshoot of the Salafi movement that tried to integrate modernism into Islam by being partially influenced by modern-day attempts to revive the ideas of the Mu'tazila school by scholars such as Muhammad Abduh.

Shia Islam is the second-largest denomination of Islam, comprising 10–20% of the total Muslim population. Although a minority in the Muslim world, Shia Muslims constitute the majority of the Muslim populations in Iran, Iraq, Lebanon, Bahrain and Azerbaijan as well as significant minorities in Syria, Turkey, eastern Africa, south Asia, Yemen, and Saudi Arabia and other parts of the Persian Gulf. In addition to believing in the authority of the Quran and teachings of Muhammad, Shia believe that Muhammad's family, the Ahl al-Bayt (the "People of the House"), including his descendants known as Imams, have special spiritual and political authority over the community and believe that Ali ibn Abi Talib, Muhammad's cousin and son-in-law, was the first of these Imams and was the rightful successor to Muhammad, and thus reject the legitimacy of the first three Rashidun caliphs. The Shia Islamic faith is broad and includes many different groups. There are various Shia theological beliefs, schools of jurisprudence, philosophical beliefs, and spiritual movements.

* The Twelvers believe in twelve Imams and are the only school to comply with Hadith of the Twelve Successors, where Muhammad stated that he would have twelve successors. This sometimes includes the Alevi and Bektashi schools. * Ismailism, including the Nizārī, Sevener, Mustaali, Dawoodi Bohra, Hebtiahs Bohra, Sulaimani Bohra and Alavi Bohra sub-denominations. * The Zaidiyyah historically come from the followers of Zayd ibn Ali. * The Alawites are a distinct religion that developed in the 9th/10th century. Historically, Twelver Shia scholars (such as Shaykh Tusi) did not consider Alawites as Shia Muslims while condemning their heretical beliefs. Ibn Taymiyyah also pointed out that Alawites were not Shi'ites. * The Druze are a distinct traditional religion that developed in the 11th century as an offshoot of Ismailism. Most Druze do not identify as Muslims, Druze also are not considered Muslims by those belonging to orthodox Islamic schools of thought (see Islam and Druze). Ibn Taymiyyah also pointed out that Druze were not Muslims, and neither ′Ahl al-Kitāb (People of the Book) nor mushrikin, rather they were kuffār (Infidel).

Muslim groups who either ascribe divine characteristics to some figures of Islamic history (usually a member of Muhammad's family, Ahl al-Bayt) or hold beliefs deemed deviant by mainstream Shi'i theology were called ''Ghulat''.

Kharijite (literally, "those who seceded") is a general term embracing a variety of Muslim sects which, while originally supporting the Caliphate of Ali, later on fought against him and eventually succeeded in his martyrdom while he was praying in the mosque of Kufa. While there are few remaining Kharijite or Kharijite-related groups, the term is sometimes used to denote Muslims who refuse to compromise with those with whom they disagree. The major Kharijite sub-sect today is the Ibadi. The sect developed out of the 7th century Islamic sect of the Kharijites. While Ibadi Muslims maintain most of the beliefs of the original Kharijites, they have rejected the more aggressive methods. A number of Kharijite groups went extinct in the past: * Sufris were a sect of Islam in the 7th and 8th centuries, and a part of the Kharijites. Their most important branches were the: ** Qurrīyya ** Nukkari * Harūrīs were an early Muslim sect from the period of the Four Rightly-Guided Caliphs (632–661 CE), named for their first leader, Habīb ibn-Yazīd al-Harūrī. * Azariqa * Najdat * Adjarites

Sufism is Islam's mystical-ascetic dimension and is represented by schools or orders known as ''Tasawwufī-Ṭarīqah.'' It is seen as that aspect of Islamic teaching that deals with the purification of inner self. By focusing on the more spiritual aspects of religion, Sufis strive to obtain direct experience of God by making use of "intuitive and emotional faculties" that one must be trained to use. The following list contains some notable Sufi orders: * The Azeemiyya order was founded in 1960 by Qalandar Baba Auliya, also known as Syed Muhammad Azeem Barkhia. * The Bektashi order was founded in the 13th century by the Islamic saint Haji Bektash Veli, and greatly influenced during its formulative period by the Hurufi Ali al-'Ala in the 15th century and reorganized by Balım Sultan in the 16th century. Because of its adherence to the Twelve Imams it is classified under Twelver Shia Islam. * The Chishti order ( fa|چشتیہ) was founded by (Khawaja) Abu Ishaq Shami ("the Syrian"; died 941) who brought Sufism to the town of Chisht, some 95 miles east of Herat in present-day Afghanistan. Before returning to the Levant, Shami initiated, trained and deputized the son of the local Emir ''(Khwaja)'' Abu Ahmad Abdal (died 966). Under the leadership of Abu Ahmad's descendants, the ''Chishtiyya'' as they are also known, flourished as a regional mystical order. The founder of the Chishti Order in South Asia was Moinuddin Chishti. * The Kubrawiya order was founded in the 13th century by Najmuddin Kubra in Bukhara in modern-day Uzbekistan. * The Mevlevi order is better known in the West as the "whirling dervishes". * Mouride is most prominent in Senegal and The Gambia, with headquarters in the holy city of Touba, Senegal. * The Naqshbandi order was founded in 1380 by Baha-ud-Din Naqshband Bukhari. It is considered by some to be a "sober" order known for its silent dhikr (remembrance of God) rather than the vocalized forms of dhikr common in other orders. The Süleymani and Khalidiyya orders are offshoots of the Naqshbandi order. * The Ni'matullahi order is the most widespread Sufi order of Persia today. It was founded by Shah Ni'matullah Wali (d. 1367), established and transformed from his inheritance of the Ma'rufiyyah circle. There are several suborders in existence today, the most known and influential in the West following the lineage of Javad Nurbakhsh, who brought the order to the West following the 1979 Iranian Revolution. * The Noorbakshia order, also called Nurbakshia, claims to trace its direct spiritual lineage and chain (silsilah) to the Islamic prophet Muhammad, through Ali, by way of Ali Al-Ridha. This order became known as Nurbakshi after Shah Syed Muhammad Nurbakhsh Qahistani, who was aligned to the Kubrawiya order. * The Oveysi (or Uwaiysi) order claims to have been founded 1,400 years ago by Uwais al-Qarni from Yemen. * The Qadiri order is one of the oldest Sufi Orders. It derives its name from Abdul-Qadir Gilani (1077–1166), a native of the Iranian province of Gīlān. The order is one of the most widespread of the Sufi orders in the Islamic world, and can be found in Central Asia, Turkey, Balkans and much of East and West Africa. The Qadiriyyah have not developed any distinctive doctrines or teachings outside of mainstream Islam. They believe in the fundamental principles of Islam, but interpreted through mystical experience. The Ba'Alawi order is an offshoot of Qadiriyyah. * Senussi is a religious-political Sufi order established by Muhammad ibn Ali as-Senussi. As-Senussi founded this movement due to his criticism of the Egyptian ulema. * The Shadhili order was founded by Abu-l-Hassan ash-Shadhili. Followers (''murids'' Arabic: seekers) of the Shadhiliyya are often known as Shadhilis. * The Suhrawardiyya order ( ar|سهروردية) is a Sufi order founded by Abu al-Najib al-Suhrawardi (1097–1168). * The Tijaniyyah order attach a large importance to culture and education, and emphasize the individual adhesion of the disciple (''murid'').

Islamic schools of jurisprudence, known as ''madhhabs'', differ in the methodology they use to derive their rulings from the Quran and hadith.

The major Shia school of jurisprudence is the Ja'fari or Imāmī school. It is further divided into two branches, the Usuli school, which favors the exercise of ijtihad, and the Akhbari school, which holds the traditions (''aḵbār'') of the Imams to be the main source of religious knowledge. Minor schools include the Ismāʿīlī school (Mustaʿlī-Fāṭimid Ṭayyibi Ismāʿīlīyah), and the Zaydī school, which have closer affinity to Sunni jurisprudence.