Click Here for Items Related To - Islam in Africa


Africa was the first continent into which Islam spread from Southwest Asia, during the early 7th century CE. Almost one-third of the world's Muslim population resides in Africa. Muslims crossed current Djibouti and Somalia to seek refuge in present-day Eritrea and Ethiopia during the ''Hijrah'' ( ar|هِـجْـرَة, 'Migration') to the Christian Kingdom of Aksum. Most Muslims in Africa are non-denominational Muslims or Sunni; the complexity of Islam in Africa is revealed in the various schools of thought, traditions, and voices in many African countries. The practice of Islam on the continent is not static and is constantly being reshaped by prevalent social, economic, and political conditions. Generally Islam in Africa often adapted to African cultural contexts and belief systems forming Africa's own orthodoxies. It was estimated in 2002 that Muslims constituted 40% of the population of Africa, a fraction which has slightly decreased in the meantime due to high birth rates in Sub-Saharan Africa. Islam has a large presence in North Africa, the Horn of Africa, Sahel, the Swahili Coast, and much of West Africa, with minority immigrant populations in South Africa.

The presence of Islam in Africa can be traced to the 7th century CE, when in Rajab 8 BH, or May 614 CE, Muhammad advised a number of his early disciples, who were facing persecution by the polytheistic inhabitants of the Mecca, to seek refuge across the Red Sea in Axum. In the Muslim tradition, this event is known as the first hijrah, or migration. Twenty-three Muslims migrated to Abyssinia where they were protected by its king, Armah ''An-Najāshī'' ( ar|الـنَّـجَـاشِي), who later accepted Islam. They were followed by 101 Muslims later in the same year. Most of those Muslims returned to Medina in 7 AH / 628 CE but some settled in the neighboring Zeila, which was at that time part of ''Bilād al-Barbar'' ( ar|بِـلَاد الْـبَـرْبَـر, "Land of the Berber(s)"). Once in Zeila, they built the ''Masjid al-Qiblaṫayn'' ( ar|مَـسْـجـد الْـقِـبْـلَـتَـيْـن, "Mosque of the two Qiblahs") in 627 CE. This mosque has two Qiblas because it was built before the Prophet switched the Qiblah from Jerusalem to Mecca. They also reportedly built Africa's oldest mosque, that is the Mosque of the Companions in the Eritrean city of Massawa. This qibla of this mosque in Massawa points towards Jerusalem as well, though now defunct, occasional prayers are still held in this mosque with qibla correction towards Mecca. In 20 H / 641 CE, during the reign of Caliph Umar ibn al-Khattab, Muslim troops took over current Egypt and conquered current Libya the following year. Muslims then expanded to current Tunisia in 27 H / 647 CE, during the reign of the third Muslim Caliph Uthman Ibn Affan. The conquest of North Africa continued under the Umayyad dynasty, which annexed parts of Algeria around 61 H/680 CE and Morocco the following year. From the latter Muslim troops crossed the Strait of Gibraltar to Europe in 92 H/711 CE. Islam gained momentum during the 10th century in West Africa with the start of the Almoravid dynasty movement on the Senegal River and as rulers and kings embraced Islam. Islam then spread slowly in much of the continent through trade and preaching. During this period these Muslims from North and West Africa came to be known by Europeans at large as Moors . By the 9th century, Muslim Sultanates started being established in the Horn of Africa, and by the 12th century, the Kilwa Sultanate had spread as far south as Mozambique. Islam only crossed deeper into Malawi and Congo in the second half of the 19th century under the Zanzibar Sultanate. Then the British brought their labor force from India, including some Muslim-Indian nationals, to their colonies in Africa towards the end of the nineteenth and beginning of the twentieth century. 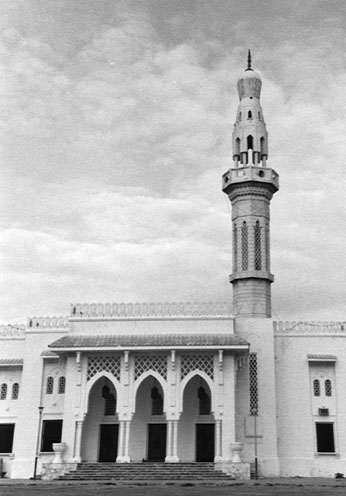 Islam was introduced to the northern Somali coast early on from the Arabian peninsula, shortly after the hijra. Zeila's two-mihrab Masjid al-Qiblatayn dates to the 7th century, and is the oldest mosque in the city. In the late 9th century, Al-Yaqubi wrote that Muslims were living along the northern Somali seaboard. He also mentioned that the Adal kingdom had its capital in the city, suggesting that the Adal Sultanate with Zeila as its headquarters dates back to at least the 9th or 10th century. According to I.M. Lewis, the polity was governed by local dynasties, who also ruled over the similarly-established Sultanate of Mogadishu in the littoral Benadir region to the south. Adal's history from this founding period forth would be characterized by a succession of battles with neighboring Abyssinia. In the following centuries, the consolidation of Muslim trading networks, connected by lineage, trade, and Sufi brotherhoods, had reached a peak in West Africa, enabling Muslims to wield tremendous political influence and power. During the reign of Umar II, the then governor of Africa, Ismail ibn Abdullah, was said to have won the Berbers to Islam by his just administration. Other early notable missionaries include Abdallah ibn Yasin, who started a movement which caused thousands of Berbers to accept Islam.

The History of Islam in Africa and accounts of how the religion spread, especially in North and the Horn of Africa, has always been contentious. Head of Awqaf Africa London, Sheikh Dr. Abu-Abdullah Adelabu has written in his Movements of Islam in face of the Empires and Kingdoms in Yorubaland claims about the early arrival of Islam in southwestern Nigeria. He seconded the Arab anthropologist Abduhu Badawi on the argument that the early Muslim missionaries had benefited their works from the fall of Kush in northern Sudan and the prosperity of the politically multicultural Abbasid period in the continent which, according to him, had created several streams of migration, moving west in the mid-9th century into Sub-Saharan Africa. Adelabu pointed at the popularity and influences of the Abbasid Dynasty (750–1258), the second great dynasty with the rulers carrying the title of 'Caliph' as fostering peaceful and prosperous migration of the intercultural Muslims from the Nile Valley to Niger as well as of the Arab traders from the desert to Benue. Adelabu's claim seems to be in line with the conventional historical view that the conquest of North Africa by the Umayyad Caliphate between AD 647–709 effectively ended Christianity in Africa for several centuries. Some argue that adoption of Islam was motivated by the desire to enhance trade, as Islam provided a moral code of conduct to regulate commercial activities, especially with respect to credit and security.

Similarly, in the Swahili coast, Islam made its way inland – spreading at the expense of traditional African religions. This expansion of Islam in Africa not only led to the formation of new communities in Africa, but it also reconfigured existing African communities and empires to be based on Islamic models. Indeed, in the middle of the 11th century, the Kanem Empire, whose influence extended into Sudan, converted to Islam. At the same time but more toward West Africa, the reigning ruler of the Bornu Empire embraced Islam. As these kingdoms adopted Islam, their subjects thereafter followed suit. In praising the Africans' zealousness to Islam, the 14th-century explorer Ibn Battuta stated that mosques were so crowded on Fridays, that unless one went very early, it was impossible to find a place to sit. In the 16th century, the Ouaddai Empire and the Kingdom of Kano embraced Islam, and later toward the 18th century, the Nigeria based Sokoto Caliphate led by Usman dan Fodio exerted considerable effort in spreading Islam. Today, Islam is the predominant religion of the northern half of Africa, mainly concentrated in North Africa, the Horn of Africa and the Sahel, as well as West Africa.

Islam has been in Africa for so long, since its emergence on the Arabian peninsula, that some scholars have argued that it is a traditional African religion. Although the majority of Muslims in Africa are non-denominational Muslims, Sunni or Sufi, the complexity of Islam in Africa is revealed in the various schools of thought, traditions, and voices that constantly contend for dominance in many African countries. Islam in Africa is not static and is constantly being reshaped by prevalent social, economic and political conditions.