The United States Supreme Court is the highest federal court of the United States. Established pursuant to Article Three of the United States Constitution in 1789, it has ultimate (and largely discretionary) appellate jurisdiction over all federal courts and state court cases involving issues of federal law plus original jurisdiction over a small range of cases. In the legal system of the United States, the Supreme Court is generally the final interpreter of federal law including the United States Constitution, but it may act only within the context of a case in which it has jurisdiction. The Court may decide cases having political overtones but does not have power to decide nonjusticiable political questions, and its enforcement arm is in the executive rather than judicial branch of government. As established by the Judiciary Act of 1869, the Court normally consists of the Chief Justice of the United States and eight associate justices who are nominated by the president and confirmed by the Senate. The justices base their decisions on their interpretation of both legal doctrine and the precedential application of laws in the past. In most cases, interpreting the law is relatively clear-cut and the justices decide unanimously. However, in more complicated or controversial cases, the Court is often divided. In modern discourse, the justices of the Court are often categorized as having conservative, moderate, or liberal philosophies of law and of judicial interpretation. It has long been commonly assumed that a justice's votes reflect his or her judicial decision-making philosophy as well as their ideological leanings, personal attitudes, values, political philosophies, or policy preferences. A growing body of academic research has confirmed this understanding, as scholars have found that the justices largely vote in consonance with their perceived values. Analysts have used a variety of methods to deduce the specific perspective of each justice over time.

Researchers have carefully analyzed the judicial rulings of the Supreme Court—the votes and written opinions of the justices—as well as their upbringing, their political party affiliation, their speeches, their political contributions before appointment, editorials written about them at the time of their Senate confirmation, the political climate in which they are appointed, confirmed, and work, and the political contributions of the law clerks they hire. From this data, scholars have inferred the ideological leanings of each justice and how the justices are likely to vote on upcoming cases. Using statistical analysis of Supreme Court votes, scholars found that an inferred value representing a Justice's ideological preference on a simple conservative–liberal scale is sufficient to predict a large number of that justice's votes. Subsequently, using increasingly sophisticated statistical analysis, researchers have found that the policy preferences of many justices shift over time. The ideological leanings of justices (and the drift over time) can be seen clearly in the research results of two sets of scholars using somewhat different models: Andrew D. Martin and Kevin M. Quinn have employed Markov chain Monte Carlo methods to fit a Bayesian measurement model of ideal points (policy preferences on a one-dimensional scale) for all the justices based on the votes in every contested Supreme Court case since 1937. The graph below shows the results of their analysis: the ideological leaning of each justice from the term that began in October 1937 to the term that began in October 2019. Note that the scale and zero point are arbitrary—only the relative distance of the lines is important. Each unique color represents a particular Supreme Court seat, which makes the transitions from retiring justices to newly appointed justices easier to follow. The black lines represent the leanings of the Chief Justices. The yellow line represents the estimated location of the median justice—who, as Duncan Black's median voter theorem posits, is often the swing vote in closely divided decisions.

Michael A. Bailey used a slightly different Markov chain Monte Carlo Bayesian method to determine ideological leanings and made significantly different scaling assumptions. He analyzed cases by calendar year and supplemented the data regarding votes in each Court case with additional information from the majority, concurring, and dissenting opinions in which justices commented on previous cases, as well as with votes made by members of Congress on similar legislation, amicus filings by Solicitors General and members of Congress, and presidential and Congressional positions on Court cases. This additional information gave him a richer dataset and also enabled him to deduce preference values that are more consistent with the DW-Nominate Common Space scores used to evaluate the ideological leanings of members of Congress and Presidents. However, he only used votes and cases related to the major topics addressed by the courts in the postwar area: crime, civil rights, free speech, religion, abortion, and privacy. He did not include federalism or economic issues. The graph below shows the ideological leaning of each justice by calendar year from 1950 to 2011. The scale and zero point roughly correspond to DW-Nominate Common Space scores, but otherwise are arbitrary. As in the graph above, each unique color represents a particular Supreme Court seat. The black lines represent the leanings of the Chief Justices. The yellow line represents the median justice. 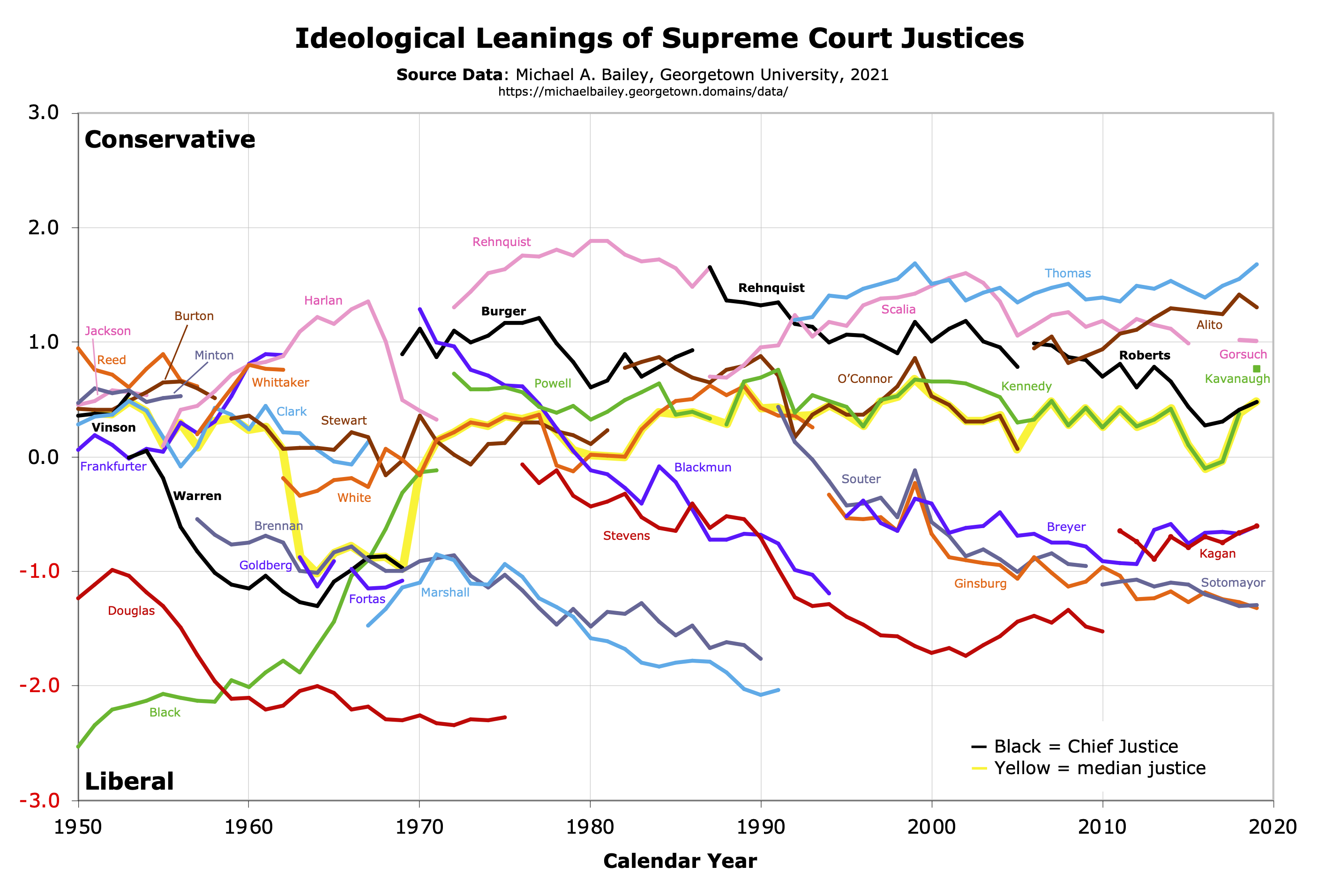 These two graphs differ because of the choices of data sources, data coverage, coding of complicated cases, smoothing parameters, and statistical methods. Each of the lines in these graphs also has a wide band of uncertainty. Because these analyses are based on statistics and probability, it is important not to over-interpret the results. Note that the nature of the cases the Supreme Court chooses to hear may lead the justices to appear more liberal or conservative than they would if they were hearing a different set of cases; the Court accepts only 100-150 of the more than 7,000 cases that it is asked to review each year. In addition, all cases are valued equally even though, clearly, some cases are much more important than others. Still, they offer an indication of the overall ideological orientation of the justices and provide a visualization of changes in the Court's orientation over time.

In the early 1930s (earlier than the data on the Martin–Quinn graph), the "Four Horsemen" (Justices James McReynolds, Pierce Butler, George Sutherland, and Willis Van Devanter) mostly opposed the New Deal agenda proposed by President Franklin D. Roosevelt. The liberal "Three Musketeers" (Justices Harlan Stone, Benjamin Cardozo, and Louis Brandeis) generally supported the New Deal. Two justices (Chief Justice Charles Evans Hughes and Justice Owen Roberts) normally cast the swing votes. As the Martin–Quinn graph shows, by the 1939 term, Roosevelt had moved the Court to a more liberal position by appointing four new justices including strong liberals Hugo Black, William O. Douglas, and Frank Murphy. However, led by the increasingly conservative Chief Justices Harlan Stone and Fred Vinson, the Court shifted in a more conservative direction through the early 1950s. President Dwight Eisenhower appointed Earl Warren to be Chief Justice in 1953, and both graphs indicate that the Court then turned in a more liberal direction as Warren grew substantially more liberal and especially when he was joined by strong liberal justices William Brennan, Arthur Goldberg, Abe Fortas, and Thurgood Marshall (though Justices Black and Felix Frankfurter became more conservative over time). In the 1970s, the Court shifted in a more conservative direction when President Richard Nixon appointed Chief Justice Warren Burger and strong conservative Justices Lewis Powell, William Rehnquist, and Harry Blackmun, and more so when President Ronald Reagan elevated Rehnquist to Chief Justice (though Blackmun became more liberal over time). The Court shifted to an even more conservative orientation when it was joined by strong conservative Justices Antonin Scalia (appointed by President Ronald Reagan), Clarence Thomas (appointed by President George H.W. Bush), and Samuel Alito and Chief Justice John Roberts (both whom were appointed by President George W. Bush). During this time, Justice David Souter became more liberal. The current Roberts Court has become more conservative, now with six conservative justices that include Justices Gorsuch, Kavanaugh, and Barrett (appointed by President Trump). Dissenting in many key cases are Justices Sotomayor and Kagan (appointed by President Obama), and Justice Breyer (appointed by President Clinton). The most volatile seat appears to be Seat 10 (light blue lines) which was held by conservative Pierce Butler until 1939, then liberal Frank Murphy until 1949, then moderate-conservative Tom Clark until 1967, then strong liberal Thurgood Marshall until 1991, and then strong conservative Clarence Thomas. The path of Justice Harry Blackmun illustrates the ideological drift shown by many justices. Blackmun (purple line) had a conservative score (Quinn–Martin = 1.462; Bailey = 0.43) in the 1969–70 term, his first on the bench, but had shifted to a liberal score (Quinn–Martin = −1.931; Bailey = −0.81) by the 1993–94 term, his last. The median justice (shown with a yellow background line) was Byron White for most of the time from 1962 to 1993, Sandra Day O’Connor from 1994 to 2005, and Anthony Kennedy from 2006 to 2018. As can be seen in these graphs, since the 1938 term, every Chief Justice (black lines), except Earl Warren, has had a more conservative ideological lean than the median justice on the Court.

The following sortable table lists the lifetime percentage "liberal" scores of Supreme Court justices as compiled in the Supreme Court Database. The table shows data for justices whose service began at or after the 1946 term; the data ends with the 2016–2017 term. The term ''liberal'' in the Supreme Court Database represents the voting direction of the justices across the various issue areas. It is most appropriate in the areas of criminal procedure, civil rights, and First Amendment cases, where it signifies pro-defendant votes in criminal procedure cases, pro-women or -minorities in civil rights cases, and pro-individual against the government in First Amendment cases. In takings clause cases, however, a pro-government/anti-owner vote is considered liberal. The use of the term is probably less appropriate in union cases, where it represents pro-union votes against both individuals and the government, and in economic cases, where it represents pro-government votes against challenges to federal regulatory authority and pro-competition, anti-business, pro-liability, pro-injured person, and pro-bankruptcy decisions. In federalism and federal taxation cases, the term indicates pro-national government positions. * # (Justice number) – order that Supreme Court Justice was appointed * Justice – Justice's name * Year confirmed – year confirmed to the Supreme Court * Position – Chief Justice or Associate Justice * Criminal procedure – a higher number means pro-defendant votes in cases involving the rights of persons accused of crime, except for the due process rights of prisoners. * Civil rights – a higher number means more votes permitting intervention on First Amendment freedom cases which pertain to classifications based on race (including Native Americans), age, indigence, voting, residence, military, or handicapped status, sex, or alienage. * First Amendment – a higher number reflects votes that advocate individual freedoms with regard to speech. * Union – a higher number means pro-union votes in cases involving labor activity. * Economic – a higher number means more votes against commercial business activity, plus litigation involving injured persons or things, employee actions concerning employers, zoning regulations, and governmental regulation of corruption other than that involving campaign spending. * Federalism – a higher number means votes for a larger, more empowered government in conflicts between the federal and state governments, excluding those between state and federal courts, and those involving the priority of federal fiscal claims. * Federal taxes – a higher number means more votes widening the government's ability to define and enforce tax concepts and policies in cases involving the Internal Revenue Code and related statues. A highlighted row indicates that the Justice is currently serving on the Court.