The NRG Astrodome, also known as the Houston Astrodome or simply the Astrodome, is the world's first multi-purpose, domed sports stadium, located in Houston, Texas. It was financed and assisted in development by Roy Hofheinz, mayor of Houston and known for pioneering modern stadiums. Construction on the stadium began in 1962, and it officially opened in 1965. It served as home to the Houston Astros of Major League Baseball (MLB) from its opening until 1999, and the home to the Houston Oilers of the National Football League (NFL) from 1968 until 1996, and also the part-time home of the Houston Rockets of the National Basketball Association (NBA) from 1971 until 1975. Additionally, the Astrodome was the primary venue of the Houston Livestock Show and Rodeo from 1966 until 2002. When opened, it was named the Harris County Domed Stadium and was nicknamed the "Eighth Wonder of the World". After the original natural grass playing surface died, the Astrodome became the first major sports venue to install artificial turf, which became known as AstroTurf. In another technological first, the Astrodome featured the "Astrolite", which was the first animated scoreboard. The Astrodome was renovated in 1988, expanding seating and altering many original features. By the 1990s, the Astrodome was becoming obsolete. Unable to secure a new stadium, Oilers owner Bud Adams moved the team to Tennessee after the 1996 season, where they eventually became the Tennessee Titans. The Astros played at the dome through the 1999 season, before relocating to Enron Field (later changed to Minute Maid Park) in 2000, while the Houston Livestock Show and Rodeo continued to be held at the Astrodome until the opening of the adjacent NRG Stadium in 2002 (which coincided with the debut of the Houston Texans, the team that replaced the Oilers). Although it no longer had any primary tenants, the venue regularly hosted events during the early 2000s, and in 2005, it was used as a shelter for residents of New Orleans affected by Hurricane Katrina. The Astrodome was declared non-compliant with fire code by the Houston Fire Department in 2008 and parts of it were demolished in 2013 after several years of disuse. In 2014 it was listed on the National Register of Historic Places.

Major League Baseball expanded to Houston in 1960 when the National League agreed to add two teams. The Houston Colt .45s (renamed the Astros in 1965) were to begin play in 1962, along with their expansion brethren New York Mets. Roy Hofheinz, a former mayor of Houston, and his group were granted the franchise after they promised to build a covered stadium. It was thought a covered stadium was a must for a major league team to be viable in Houston due to the area's subtropical climate and hot summers. Game-time temperatures are usually above in July and August, with high humidity and a likelihood of rain. Hofheinz claimed inspiration for what became the Astrodome from a tour of Rome, where he learned that the builders of the ancient Colosseum installed giant ''velaria'' to shield spectators from the sun. The Astrodome was conceived by Hofheinz as early as 1952, when he and his daughter Dene were rained out once too often at Buffalo Stadium, home of Houston's minor league baseball team, the Houston Buffs. Hofheinz abandoned his interest in the world's first air-conditioned shopping mall, The Galleria, and set his sights on bringing major league baseball to Houston.

The Astrodome was designed by architects Hermon Lloyd & W. B. Morgan, and Wilson, Morris, Crain and Anderson (Morris Architects). Structural engineering and structural design were performed by Walter P Moore Engineers and Consultants of Houston. Credit for the design work on the dome roof structural goes to Dr. G.R. Kiewitt and Mr. Louis O. Bass of Roof Structures, Inc. It was constructed by H. A. Lott, Inc. for Harris County. It stands 18 stories tall, covering . The dome is in diameter and the ceiling is above the playing surface, which itself sits below street level. 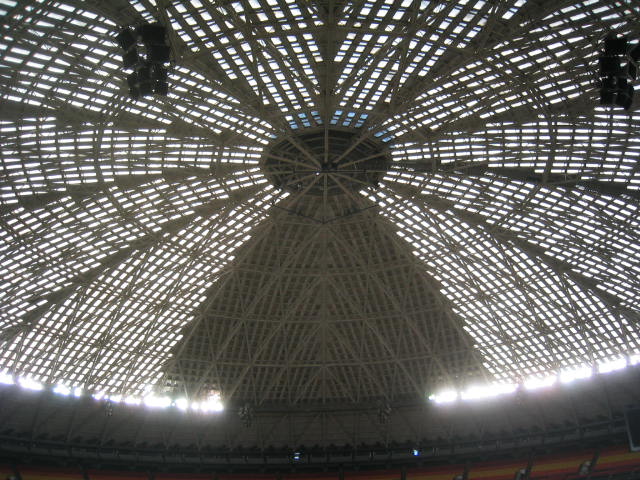 The scoreboard, eventually known as the "Astrolite", was designed by Fair Play Scoreboards of Des Moines, Iowa. Having designed the scoreboard for Dodger Stadium several years prior, team owner Roy Hofheinz was not impressed with the initial proposal for a much more generic type of scoreboard. Project designer Jack Foster teamed up with a creative professional based in Kansas City to create the first animated scoreboard. Its reported cost was $2.1 million. The Dome was completed in November 1964, six months ahead of schedule. Many engineering changes were required during construction, including the modest flattening of the supposed "hemispherical roof" to cope with environmentally induced structural deformation and the use of a new paving process called "lime stabilization" to cope with changes in the chemistry of the soil. The air conditioning system was designed by Houston mechanical engineers Israel A. Naman and Jack Boyd Buckley of I. A. Naman + Associates. The multi-purpose stadium, designed to facilitate both football and baseball, is nearly circular and uses movable lower seating areas. It also ushered in the era of other fully domed stadiums, such as the Mercedes-Benz Superdome in New Orleans, as well as the now-demolished Pontiac Silverdome near Detroit, Georgia Dome in Atlanta, Hubert H. Humphrey Metrodome in Minneapolis, Kingdome in Seattle, and RCA Dome in Indianapolis. To test what effect the enclosed air-conditioned environment might have on the delivery of breaking balls, Satchel Paige, in full Astros uniform, threw the first pitches at the Astrodome on February 7, 1965. He later concluded that it was a "pitcher's paradise", as the lack of wind allowed for sensitive pitches to maneuver more easily. Hofheinz had an opulent apartment in the Dome, which was removed when the facility was remodeled in 1988.

On Opening Day, April 9, 1965, a sold-out crowd of 47,879 watched an exhibition game between the Houston Astros and the New York Yankees. President Lyndon B. Johnson and his wife Lady Bird were in attendance, as well as Texas Governor John Connally and Houston Mayor Louie Welch. Governor Connally tossed out the first ball for the first game ever played indoors. Dick "Turk" Farrell of the Astros threw the first pitch. Mickey Mantle had both the first hit (a single) and the first home run in the Astrodome. The Astros beat the Yankees that night, 2–1.

President Johnson stopped at the Astrodome that evening en route to his home in Johnson City and paid his respects to baseball and Astros president Roy Hofheinz, a campaign manager for Johnson in the 1940s, just as the second inning got underway. He and Lady Bird watched the opening night game from behind the glass in Judge Hofheinz's private box high in the right field just to the right of the giant scoreboard. LBJ ate hors d'œuvres and chicken and ice cream while watching the game.