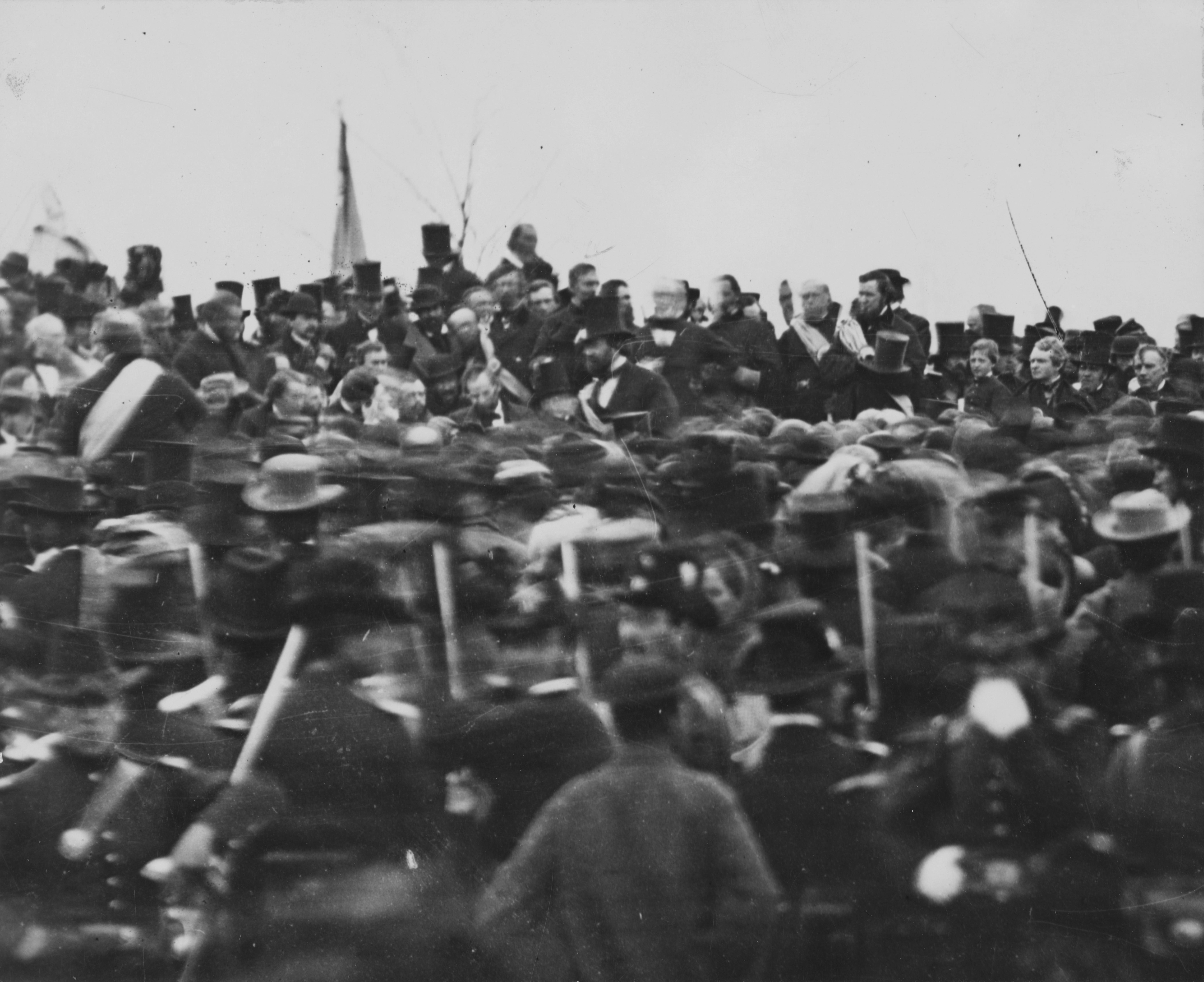 The Gettysburg Address is a speech that U.S. President Abraham Lincoln delivered during the American Civil War at the dedication of the Soldiers' National Cemetery in Gettysburg, Pennsylvania, on the afternoon of November 19, 1863, four and a half months after the Union armies defeated those of the Confederacy at the Battle of Gettysburg. It is one of the best-known speeches in American history. Not even the day's primary speech, Lincoln's carefully crafted address came to be seen as one of the greatest and most influential statements of American national purpose. In just 271 words, beginning with the now famous phrase "Four score and seven years ago,"‍ referring to the signing of the Declaration of Independence 87 years earlier, Lincoln described the US as a nation "conceived in Liberty, and dedicated to the proposition that all men are created equal," and represented the Civil War as a test that would determine whether such a nation, the Union sundered by the secession crisis, could endure. He extolled the sacrifices of those who died at Gettysburg in defense of those principles, and exhorted his listeners to resolve :that these dead shall not have died in vain—that this nation, under God, shall have a new birth of freedom—and that government of the people, by the people, for the people, shall not perish from the earth. Despite the prominent place of the speech in the history and popular culture of the United States, its exact wording is disputed. The five known manuscripts of the Gettysburg Address in Lincoln's hand differ in a number of details, and also differ from contemporary newspaper reprints of the speech. Neither is it clear where stood the platform from which Lincoln delivered the address. Modern scholarship locates the speakers' platform 40 yards (or more) away from the traditional site in Soldiers' National Cemetery at the Soldiers' National Monument, such that it stood entirely within the private, adjacent Evergreen Cemetery. 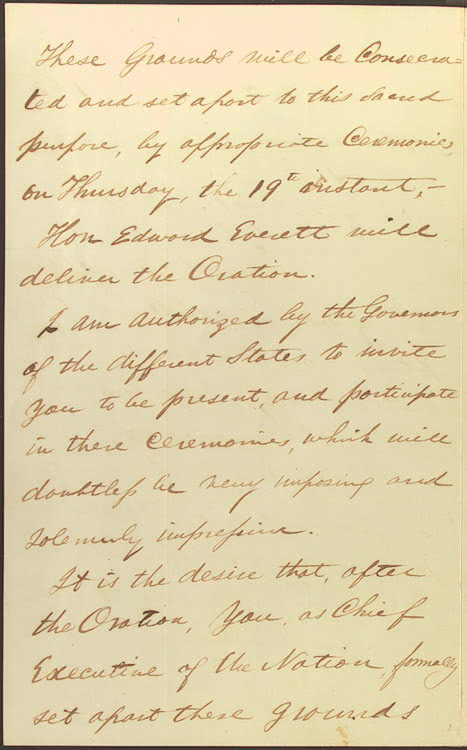 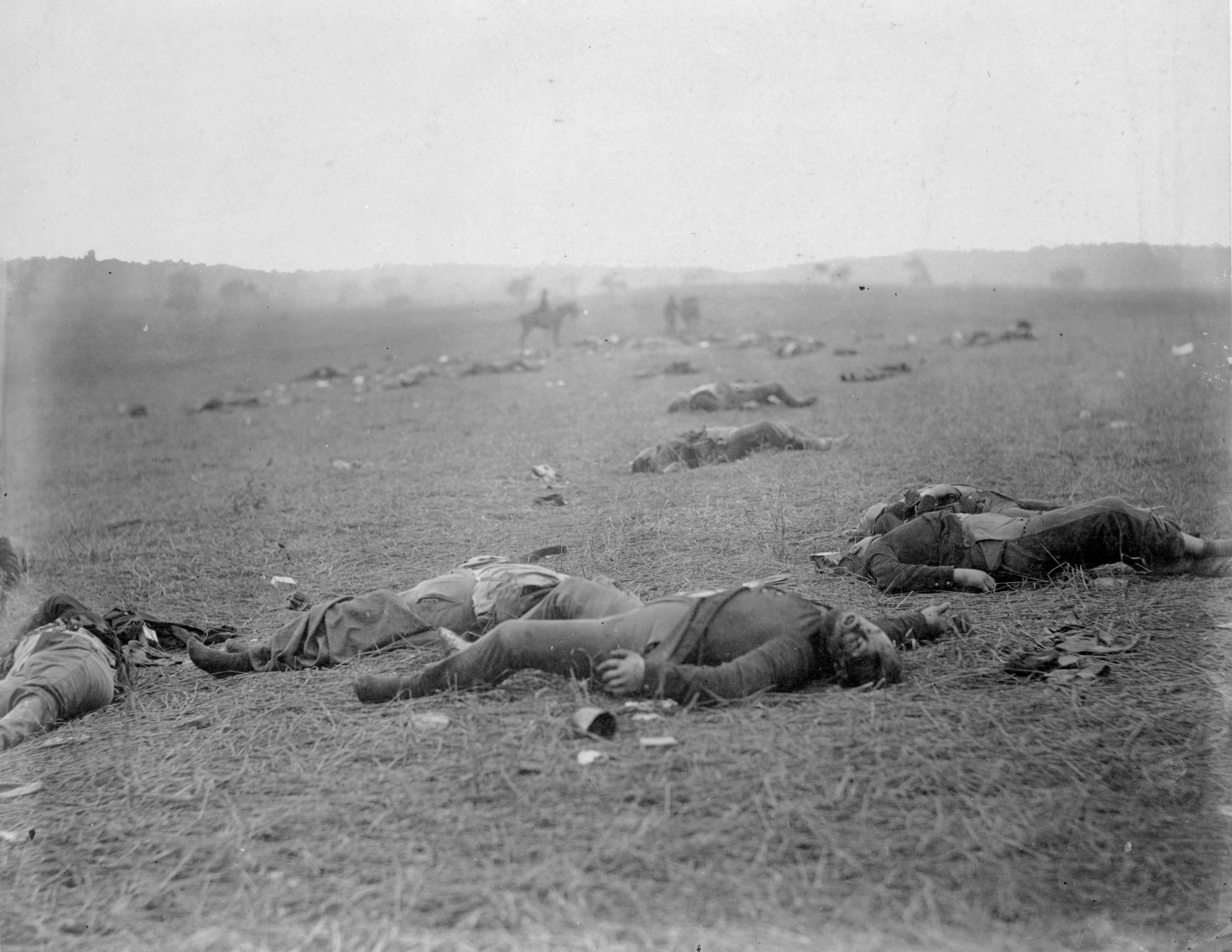 Following the Battle of Gettysburg on July 1–3, 1863, the removal of the fallen Union soldiers from the Gettysburg Battlefield graves and their reburial in graves at the National Cemetery at Gettysburg began on October 17, though on the day of the ceremony, reinterment was less than half complete. In inviting President Lincoln to the ceremonies, David Wills, of the committee for the November 19 Consecration of the National Cemetery at Gettysburg, wrote, "It is the desire that, after the Oration, you, as Chief Executive of the nation, formally set apart these grounds to their sacred use by a few appropriate remarks." On the train trip from Washington, D.C., to Gettysburg on November 18, Lincoln was accompanied by three members of his Cabinet, William Seward, John Usher and Montgomery Blair, several foreign officials, his secretary John Nicolay, and his assistant secretary, John Hay. During the trip Lincoln remarked to Hay that he felt weak; on the morning of November 19, Lincoln mentioned to Nicolay that he was dizzy. Hay noted that during the speech Lincoln's face had "a ghastly color" and that he was "sad, mournful, almost haggard." After the speech, when Lincoln boarded the 6:30 pm train for Washington, D.C., he was feverish and weak, with a severe headache. A protracted illness followed, which included a vesicular rash; it was diagnosed as a mild case of smallpox. It thus seems highly likely that Lincoln was in the prodromal period of smallpox when he delivered the Gettysburg address. After arriving in Gettysburg, which had become filled with large crowds, Lincoln spent the night in Wills's house. A large crowd appeared at the house, singing and wanting Lincoln to make a speech. Lincoln met the crowd, but did not have a speech prepared, and returned inside after saying a few extemporaneous words. The crowd then continued to another house, where Secretary of State William Seward delivered a speech. Later that night, Lincoln wrote and briefly met with Seward before going to bed at about midnight. 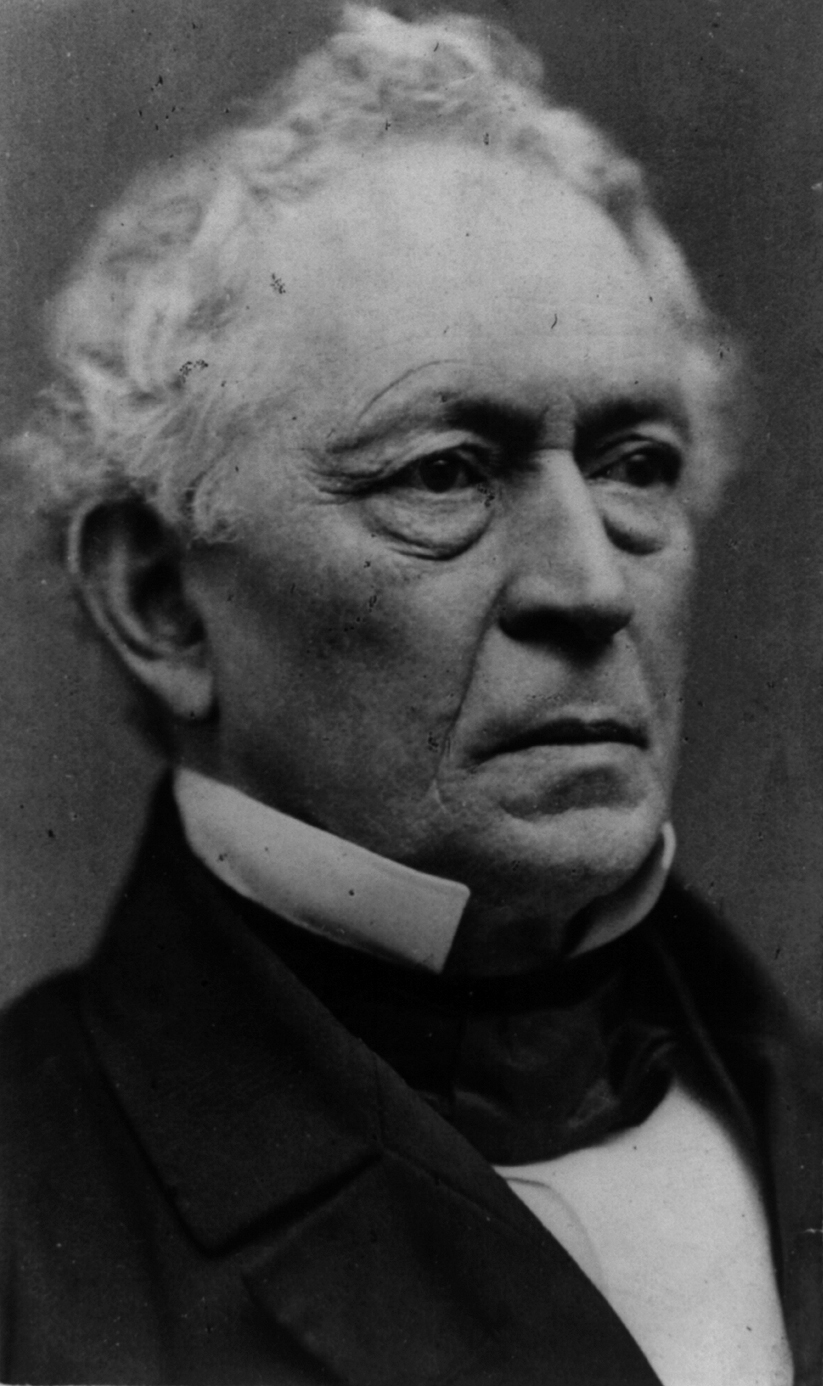 The program organized for that day by Wills and his committee included: While it is Lincoln's short speech that has gone down in history as one of the finest examples of English public oratory, it was Everett's two-hour oration that was slated to be the "Gettysburg address" that day. His now seldom-read oration was 13,607 words long and lasted two hours. Lengthy dedication addresses like Everett's were common at cemeteries in this era. The tradition began in 1831 when Justice Joseph Story delivered the dedication address at Mount Auburn Cemetery in Cambridge, Massachusetts. Those addresses often linked cemeteries to the mission of Union.


Text of the Gettysburg Address

Shortly after Everett's well-received remarks, Lincoln spoke for only a few minutes. With a "few appropriate remarks", he was able to summarize his view of the war in just ten sentences. Despite the historical significance of Lincoln's speech, modern scholars disagree as to its exact wording, and contemporary transcriptions published in newspaper accounts of the event and even handwritten copies by Lincoln himself differ in their wording, punctuation, and structure. Of these versions, the Bliss version, written well after the speech as a favor for a friend, is viewed by many as the standard text. Its text differs, however, from the written versions prepared by Lincoln before and after his speech. It is the only version to which Lincoln affixed his signature, and the last he is known to have written.