FlightAware is a global aviation software and data services company based in Houston, Texas, United States. The company operates a website and mobile applications which offer free flight tracking of both private and commercial aircraft around the globe. It is currently the world's largest flight tracking platform with a network of over 30,000 ADS-B ground stations in 197 countries. FlightAware also provides services and data to aircraft and airport operators as well as other aviation organizations to assist in their operations. FlightAware provides enterprise services and tools to aircraft operators worldwide as well as flight tracking systems to airports in over 50 countries across North America, Europe, and Oceania. The company has its headquarters at Eleven Greenway Plaza in Houston, an advertising office at 500 Fifth Avenue in New York City and offices is London & Singapore.

In late 2004, CEO, Daniel Baker, started exploring the idea of creating a free flight tracking service as he wanted a way for his family to track his private flights around the country. At the time, there were few enterprise solutions that offered this kind of service. Baker recruited friends Karl Lehenbauer and David McNett to help create a free public flight tracking service. On March 17, 2005, FlightAware was officially founded and began processing live flight data. FlightAware earned over one million dollars in revenue in its first 18 months. FlightAware has been profitable since 2006 and is growing at the rate of 40-50% per year, as of April 2014. Previous to the current location at 11 Greenway Plaza, FlightAware headquarters was in Suite 1300 at 8 Greenway Plaza, and originally the FlightAware headquarters were in the Midtown area of Houston. FlightAware's CEO has cited Houston's inexpensive office space, geographical proximity to the rest of the country, and lack of a city or state income tax as an advantage.

200px|Example of a chart available for download The company's web site provides flight tracking information and notifications of private and commercial flights as well as airport activity, flight and airport maps with weather, aviation statistics, flight planning and instrument flight rules procedures for airports in the United States and Australia. In addition, the site includes pilot services such as flight planning, aviation news, photos, and an aviation discussion forum. Users can register with the site for free, which adds features and functionality as well as the ability to participate in community features. Registration allows users to upload photos, submit aviation-related news (squawks), participate in discussion forums, and set up aircraft alerts in addition to numerous other features. FlightAware reports over ten million registered users. FlightAware serves over 500 million flight tracking pages to over 12 million users per month .

A selective unblocking service is available for aircraft owners and operators to selectively choose friends, family, employees, and business associates that are allowed to track an aircraft's movements. However, when a selective unblocking is used, the aircraft movements remained blocked to the general public. An owner or operator can opt to do this for privacy or security reasons.

FlightAware TV is a web-based aircraft situational display scaled for an HDTV. FlightAware TV can be customized to show a "fleet view" to monitor an entire fleet or in "airport" view to monitor airport activity such as departures and arrivals.

FBO ToolBox is a Web-based, market-analysis and flight-tracking application that allows FBO managers insight into their customers. Primary features include competitive fuel price analysis, airport traffic analysis, AMSTAT operator information, airport history reports, and top origins/destinations. A proprietary fuel-burn calculator estimates the number of gallons necessary to complete a filed flight plan, and can deliver FBO managers a picture of potential fuel sales on any given day. In May 2012, FlightAware launched "FBO ToolBox Europe" for airport operators in Europe.

Custom reports can be generated with a variety of parameters to aid aircraft owners, operators, airports, and business owners in planning decisions. For example, a historical report can be compiled to analyze air traffic frequency at a particular airport. 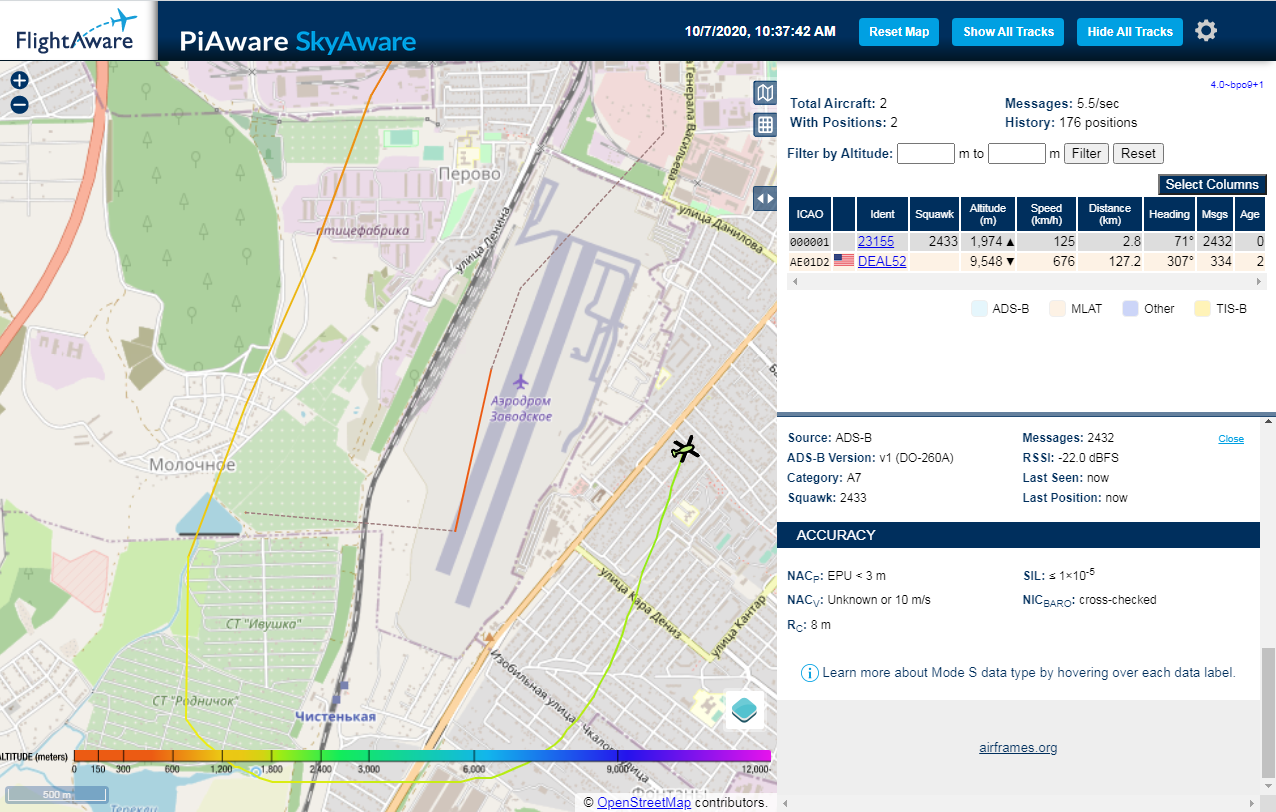 Automatic dependent surveillance – broadcast (ADS-B) is a technology for tracking aircraft. FlightAware operates a network of ADS-B receivers for tracking ADS-B equipped aircraft. FlightAware offers that professional operators of existing ADS-B sites can connect their receivers to FlightAware and, in exchange, receive additional account features/privileges. , FlightAware's network consists of over 1,000 sites, predominately in Europe, North America, and Australia. FlightAware produces FlightFeeder, a small ADS-B receiver that receives and processes ADS-B data, then sends it to FlightAware over the Internet and also makes the data available locally. FlightAware provides this unit free of charge to individuals in areas where FlightAware's ADS-B network does not have sufficient coverage. The company deploys 75-100 new FlightFeeders per month. As of October 31, 2020, FlightAware has 24,350 ADS-B sites in 192 countries, an increase of 4,651 sites since October 22, 2018. In September 2016, Aireon and FlightAware announced a partnership to provide this global space-based ADS-B data to airlines for flight tracking of their fleets and, in response to Malaysia Airlines Flight 370, for compliance with the ICAO Global Aeronautical Distress and Safety System (GADSS) requirement for airlines to track their fleets.

FlightAware has a flight tracking API called FlightXML for third parties to incorporate FlightAware data into their own applications. Functionality includes flight status, airline data, maps, and push call-backs. FlightXML's API can be accessed via Representational state transfer or Simple Object Access Protocol and the API can be accessed from any programming language that supports XML. FlightXML is charged on a per query basis and the more queries that a user account makes per month, the less the per-query fee is. Features such as push notifications allow an app to be noticed about flight plans, schedule changes, departures, arrivals, cancellations, diversions, and more. FlightXML users can also receive worldwide airline information such as gate assignments, gate times, seat information, aircraft tail number, codeshare details, and meal service information.

FlightAware has a live data feed called Firehose for third parties to incorporate live FlightAware positions around the world into their applications. Data is available as live snapshots or a streaming data feed.