The Fields Medal is a prize awarded to two, three, or four mathematicians under 40 years of age at the International Congress of the International Mathematical Union (IMU), a meeting that takes place every four years. The Fields Medal is regarded as one of the highest honors a mathematician can receive, and has been described as the mathematician's Nobel Prize, although there are several key differences, including frequency of award, number of awards, and age limits. According to the annual Academic Excellence Survey by ARWU, the Fields Medal is consistently regarded as the top award in the field of mathematics worldwide, and in another reputation survey conducted by IREG in 2013–14, the Fields Medal came closely after the Abel Prize as the second most prestigious international award in mathematics. The prize comes with a monetary award which, since 2006, has been 15,000. The name of the award is in honour of Canadian mathematician John Charles Fields. Fields was instrumental in establishing the award, designing the medal himself, and funding the monetary component. The medal was first awarded in 1936 to Finnish mathematician Lars Ahlfors and American mathematician Jesse Douglas, and it has been awarded every four years since 1950. Its purpose is to give recognition and support to younger mathematical researchers who have made major contributions. In 2014, the Iranian mathematician Maryam Mirzakhani became the first female Fields Medalist. In all, sixty people have been awarded the Fields Medal. The most recent group of Fields Medalists received their awards on 1 August 2018 at the opening ceremony of the IMU International Congress, held in Rio de Janeiro, Brazil. The medal belonging to one of the four joint winners, Caucher Birkar, was stolen shortly after the event. The ICM presented Birkar with a replacement medal a few days later.

Conditions of the award

The Fields Medal has for a long time been regarded as the most prestigious award in the field of mathematics and is often described as the Nobel Prize of Mathematics. Unlike the Nobel Prize, the Fields Medal is only awarded every four years. The Fields Medal also has an age limit: a recipient must be under age 40 on 1 January of the year in which the medal is awarded. The under-40 rule is based on Fields's desire that "while it was in recognition of work already done, it was at the same time intended to be an encouragement for further achievement on the part of the recipients and a stimulus to renewed effort on the part of others." Moreover, an individual can only be awarded one Fields Medal; laureates are ineligible to be awarded future medals. First awarded in 1936, 60 people have won the medal as of 2018. With the exception of one Ph.D. holder in physics (Edward Witten), only people with a Ph.D. in mathematics have won the medal.

The medal was first awarded in 1936 to the Finnish mathematician Lars Ahlfors and the American mathematician Jesse Douglas, and it has been awarded every four years since 1950. Its purpose is to give recognition and support to younger mathematical researchers who have made major contributions. In 1954, Jean-Pierre Serre became the youngest winner of the Fields Medal, at 27. He retains this distinction. In 1966, Alexander Grothendieck boycotted the ICM, held in Moscow, to protest Soviet military actions taking place in Eastern Europe. Léon Motchane, founder and director of the Institut des Hautes Études Scientifiques, attended and accepted Grothendieck's Fields Medal on his behalf. In 1970, Sergei Novikov, because of restrictions placed on him by the Soviet government, was unable to travel to the congress in Nice to receive his medal. In 1978, Grigory Margulis, because of restrictions placed on him by the Soviet government, was unable to travel to the congress in Helsinki to receive his medal. The award was accepted on his behalf by Jacques Tits, who said in his address: "I cannot but express my deep disappointment—no doubt shared by many people here—in the absence of Margulis from this ceremony. In view of the symbolic meaning of this city of Helsinki, I had indeed grounds to hope that I would have a chance at last to meet a mathematician whom I know only through his work and for whom I have the greatest respect and admiration." In 1982, the congress was due to be held in Warsaw but had to be rescheduled to the next year, because of martial law introduced in Poland on 13 December 1981. The awards were announced at the ninth General Assembly of the IMU earlier in the year and awarded at the 1983 Warsaw congress. In 1990, Edward Witten became the first physicist to win the award. In 1998, at the ICM, Andrew Wiles was presented by the chair of the Fields Medal Committee, Yuri I. Manin, with the first-ever IMU silver plaque in recognition of his proof of Fermat's Last Theorem. Don Zagier referred to the plaque as a "quantized Fields Medal". Accounts of this award frequently make reference that at the time of the award Wiles was over the age limit for the Fields medal. Although Wiles was slightly over the age limit in 1994, he was thought to be a favorite to win the medal; however, a gap (later resolved by Taylor and Wiles) in the proof was found in 1993. In 2006, Grigori Perelman, who proved the Poincaré conjecture, refused his Fields Medal and did not attend the congress. In 2014, Maryam Mirzakhani became the first woman as well as the first Iranian to win the Fields Medal, and Artur Avila became the first South American and Manjul Bhargava became the first person of Indian origin to do so. 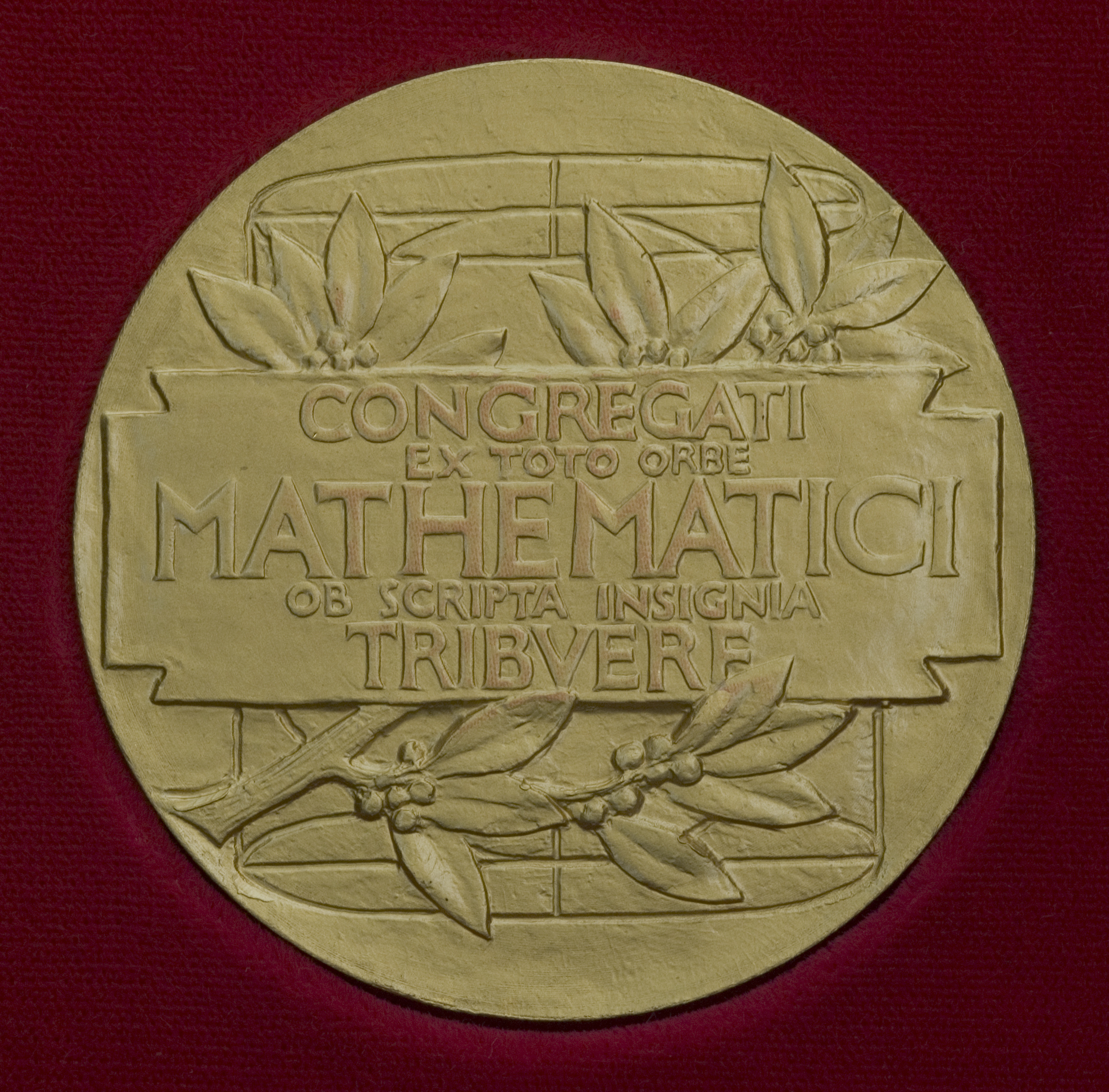 The medal was designed by Canadian sculptor R. Tait McKenzie. * On the obverse is Archimedes and a quote attributed to him which reads in Latin: "Transire suum pectus mundoque potiri" ("Rise above oneself and grasp the world"). The date is written in Roman numerals and contains an error ("MCNXXXIII" rather than "MCMXXXIII"). In capital Greek letters the word ΑΡXIMHΔΟΥΣ, or "of Archimedes". * On the reverse is the inscription (in Latin): : : : : : Translation: "Mathematicians gathered from the entire world have awarded nderstood but not written: 'this prize'for outstanding writings." In the background, there is the representation of Archimedes' tomb, with the carving illustrating his theorem On the Sphere and Cylinder, behind an olive branch. (This is the mathematical result of which Archimedes was reportedly most proud: Given a sphere and a circumscribed cylinder of the same height and diameter, the ratio between their volumes is equal to .) The rim bears the name of the prizewinner.

The Fields Medal, which was initiated in 1936 and is considered the most prestigious prize in mathematics, was only obtained for the first time by a woman, Maryam Mirzakhani from Iran, in 2014.